Yikes! I have officially been a WA member for 8 years!

Would you like to hear the whole story? OK, here is how it got started…

I was up late and looking for a solution on the internet about how to improve my SEO skills and learn how I can make money online.

After a plethora a searching, Wealthy Affiliate landed on my lap and the magic of their sales letter convinced me that I’d give it a try.

Here is a screenshot of what WA looked like back in 2007: 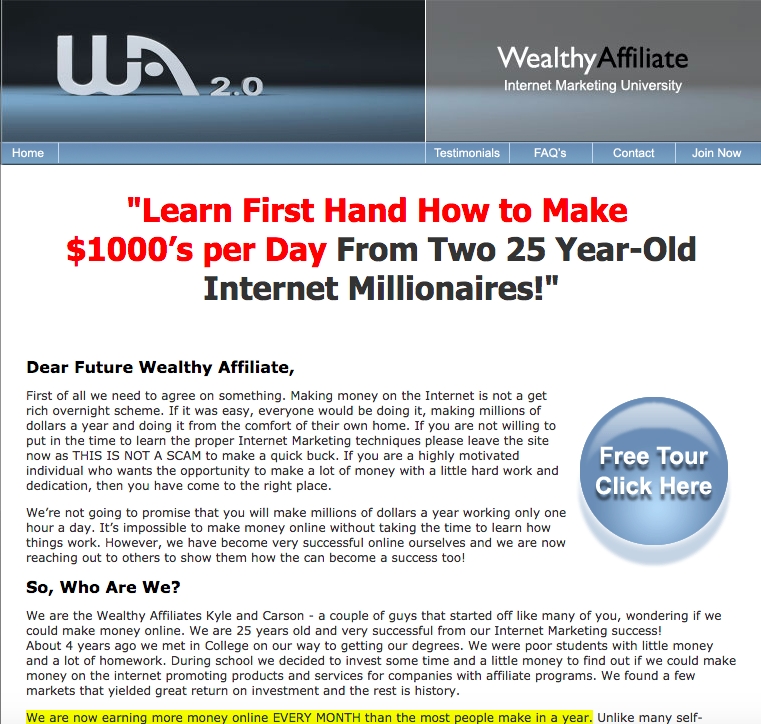 The information and tools (even way back then) were awesome. There was a very supportive community (via a forum) who would gladly answer any question regardless of how silly you thought it was.

With stars (and dollar signs) in my eyes, I thought with my existing web/graphic design background I would build an elaborate network of websites called ‘InfoAboutEverything.com’ where I would build a bunch of websites that would essentially link to each other and I’d make a bunch a of money.

Of course I would run it by Carson to see what he thought about my elaborate plan of attack to make my millions and was honestly anticipating the green light from the WA owners.

I was told to pull the reigns back…

Carson thought overall my plan was extensive and applauded me for my eagerness, but gave me a reality check on how much time that would take and how ‘thin’ the concept was.

One site at a time Jay…

So I took Carson’s advice and started with just one site. And I am VERY thankful that I followed that advice because that site is still a great success!

It had been one month since I joined WA and was really enjoying the support and tools.

Then one day, I was at Costco doing my typical mass quantity shopping, I had noticed someone across the isle who I recognized but just couldn’t put a name to the face.

Then it dawned upon me that it was Carson from WA!

It really caught me by surprise but I decided to approach him and introduce myself.

Me: “Excuse me.. are you Carson from Wealthy Affiliate”

Carson: “Yes, are you MagiStudios?”

My thoughts were: ‘Holy Crap he knows who I am!’

We didn’t realize that we both lived in the same city and later through our conversation we were literally only a few minutes apart from each others’ houses.

We spent the next 20 minutes talking shop (internet marketing) until Costco told us it was time to leave as they were closing.

That meeting had a profound effect on me and really kick started my success. Why?

Because it made me realize that Kyle & Carson were real people that truly cared about their members regardless of how close or far away they lived.

The Start of an Eternal Friendship & WAbinars

Shortly after bumping into Carson at Costco, I had the opportunity to meet with Kyle (who also lived within the same city) and Carson for coffee.

This ended up becoming a regular thing and we would talk about business including the state of the online marketing industry and how it could be improved. I felt privilege to be included in these conversations and was absorbing the info like a sponge.

To this day, we still get together for coffee and talk shop. :)

One of those coffee shop meetings, I mentioned that I was once involved in radio and how comfortable I was in front of an audience and microphone. And with Kyle & Carson’s entrepreneurial minds, they felt compelled to leverage this talent.

We had all noticed that the online marketing industry had JUST started doing webinars but all of them had some sort of upsell at the end and really offered no value.

So the birth of the WAbinar happened

It was decided to start regular online live training sessions that offered pure training and never any upsell opportunities.

To this day, the WAbinars still hold this prestigious value.

My Commitment to WA and YOU

Even though I have been here for an entire 8 years, I have no plan to leave WA anytime soon.

I have a personal mantra to help you in the same manner how Kyle and Carson have helped me achieve success.

And we may not live within the same city, I like to consider you a neighbour when you attend the live training sessions.

So, please raise a glass and help me celebrate being a WA member for 8 years!

And cheers to YOU for taking the time to read this and being involved within the WA community! I hope to read your WAnniversay post soon!

Write something…
Recent messages
vin8 Premium
Hi Jay, congratulations on your anniversary of eight years with WA. Thanks also for the education from the WAbiners you make, they are greatly appreciated. Take care, Wayne.

Reply Like Like You like this
Mark Tait Premium
Hi Jay - I intend being here for a loonnnggg time too - but I love hearing about other people's stories, so thanks for posting.

Reply Like Like You like this
Kathy331 Premium
How wonderful hearing your story Jay, and that "coincidence" spotting Carson in Costco!
Your WAbinars are always too late for me to attend live (UK), but the great thing is they are all there for me to watch anytime, I love them!

Thank you for being here and long may it continue. :)

Reply Like Like You like this
Loes Premium
Congratiolations Jay! I hope to write a post like this also in the future:) Time flies, 33 years ago, on the 22nd of march my second daugther was born, a day which I remember as if it was yesterday, keep up the good work, Jay! Loes