I love people who care

Something unusual happened on Wednesday but let me start this story about 3 weeks ago. A lady (Jane) calls me on the phone. She had been speaking to a friend of mine who breeds alpacas. Jane tells me that an alpaca has been roaming on her land for the past 5 years. It was part of a small herd but since it was fighting with the others all the time, the original owner just abandoned it and let it go free.

As many of you know, I shear alpacas and Jane wanted me to see if we could shear this animal for its wellbeing. I went to the farm around the end of May hoping to see this alpaca. It had not been shorn for at least 4 years. Jane and I walked the land and we saw it resting under a tree on a neighbour's land. We slowly got closer and Jane escalated the fence to get him to stand up. I glanced at the animal to figure the size and somewhat the condition of it. I told Jane yes we can shear this alpaca. The trick was to catch him though.

Jane worked with the neighbours and got a cow catch pen installed in her field. She fed Bart (the name she gave the alpaca) every day. Bart often came in the pen in the morning, never in the afternoon. She could not trap him in because we did not want the animal to be trapped there in the sun during all day. I was available only after 5 pm.

On Wednesday I called Jane to see how Bart was doing. I left a voice mail. As I was driving back home after work when Jane called me. She and her husband trapped Bart in the pen and we could shear him. Wow. 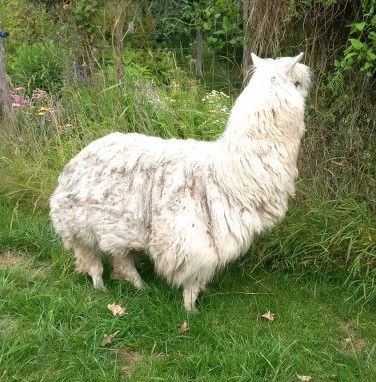 This is Bart with over 12 inches of fiber. When wet, this coat must weigh at least 50 lbs. Alpacas grow around 3 to 6 inches of fibre per year. He has been roaming free for at least 5 years.

Bart has blue eyes and is a white alpaca. These two characteristics in alpacas are often related to another gene - Bart is deaf. This is probably the reason he was fighting with the other alpacas. Another shearer attempted to shear this alpaca last year but without a table, it was impossible.

When I got the call, I went home to change and grab a bite. My husband and I got to the farm 45 minutes later and we installed the shearing table.

This is how long Bart's fiber was. The fiber was not easy to untangle. We even found blackberry branches in the fleece. Must have been terrible for Bart. 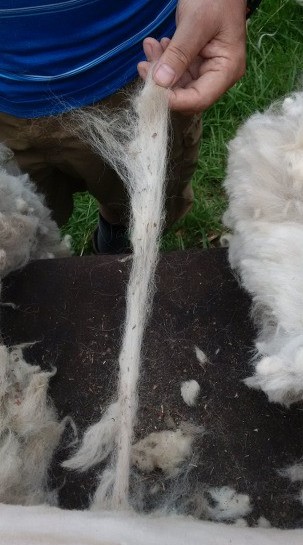 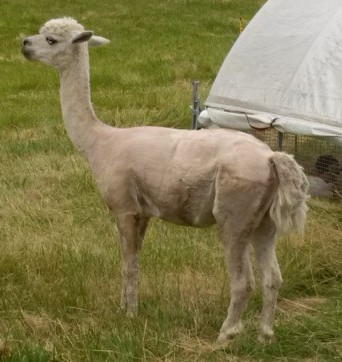 The new Bart. Yes, there was an alpaca under all that fleece. When we got him off the table, he did not run. He seemed thankfull.

This experience is a once in a lifetime. Jane and her family care about this animal and I love them for this.

I wanted to share this experience with all of you because you care about all the WA members here and I thank you. You are a wonderful community.

Have a great rest of the week.

Write something…
Recent messages
firstlearn Premium
I am sure Bart feels a lot more comfortable now.

That's an amazing real-life story...awesome! He looks very handsome, lol. You left him with a fluffy tail, and a head of hair. It's kinda like a crew cut. That's a proud Bart. I believe he likes it.

Thank you so much for sharing it with us.

Reply Like Like You like this
DianeWehi Premium
I love happy endings :)
Thank you all for caring about Bart.
Its so refreshing to hear how people still do care about our beautiful animals.
I found this very uplifting.
A beautiful share.
Thank you :)

Reply Like Like You like this
WendaSue Premium
Great job... with the Alpaca and this post. I am so glad someone cared for this poor creature. Why should he run from Y'all? You just helped him out tremendously!!!
All the best,
Wendi 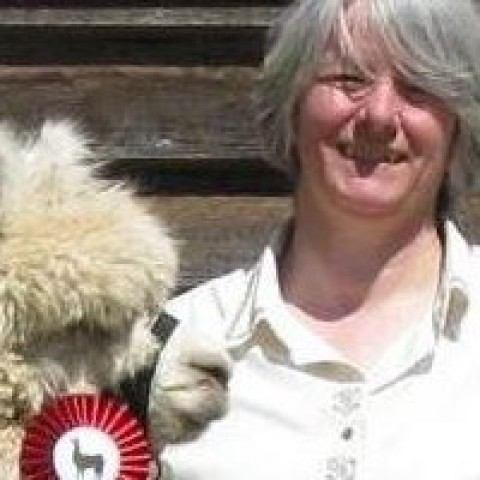