Once again here's my monthly update which I started doing in January 2018 to document all my progress and keep myself accountable. I highly recommend you guys to do this as well. It just gives you more clarity in terms of your progress.

(By the way, I'm still hustling on my way. Can't compete with those very successful WA members YET. But I'm sure this can be a good morale booster for many other members here!)

And currently it's 105 posts. This is really a huge milestone. I've worked hard for it, publishing at least 20 posts per month.

Oh by the way, I've achieved my monthly goal of posting at least 20 posts this month. In fact, this month I published 23 posts.

In February, my organic traffic increased by 142.72% which is crazy. For March, it's not that much compared to Feb - 85.32% increase. (Probably because of the Google Algorithm update which I'll talk about in just a minute)

In February, I had 35 Free Starter Referrals but I had no sales. I was pretty disappointed at that time. I'm sure a lot of you working hard for Bootcamp have the same kind of feeling.

So, I just want to encourage those who are struggling, it all comes down to hard work and time. As long as you're following what is taught here in WA and taking massive and consistent actions, you're on the right track.

Out of 100 Free Starter Members, only 8 to 12 will upgrade to Premium. That's the rough conversion rate I observed if you follow WA's training and focus on Organi Traffic. (Conversion rate may be different if you're focusing on paid traffic.)

If you're only getting like 30 referrals, it may feel like a lot in the beginning but it's normal if don't have any Premium sales YET. It's also normal that a lot of them don't even set up their accounts. Since WA Starter Member is FREE, some people will take it lightly. That's just the reality.

So, don't complain if you're not getting Premium upgrades like what I did in Feb. Just keep hustling!

(Update: Some people upgrade to Premium after being a WA Starter Member for a month. Some even longer. So your effort is never wasted!)

There's one major problem I encountered in March and I believe this issue had troubled a lot of you as well.

For your information, Google's Algorithm has at least 500 - 600 updates every year which is around 2 updates per day. Most of these updates are small but there are a few major updates throughout the year.

There's one major update at the end of Feb or in the beginning of March. Their goal is to improve the search results but what this has resulted was that it became very hard for many people to get their post indexed and ranked.

Personally, I was able to rank on Google page 1 within minutes before March:

Since I followed closely with what's taught in WA, I managed to get my posts rank on page 1 or page 2 of Google most of the time for my keywords.

However, due to the major update, my new posts weren't even close to page 20. A lot of them can't even get indexed and showed up in Google. I was pretty frustrated at that time but I just kept going. I knew what I need to do and that is to keep writing quality content.

Eventually, in the last week or last two weeks of March, my rankings are back. Once again, I'm able to get ranked on Google page 1 or 2 very fast for my new posts. That was a huge relieve for me.

So the moral of the story is to keep hustling no matter what obstacles you're facing. Just keep going!

By the way, this setback caused my traffic to be stagnant for a while in March: 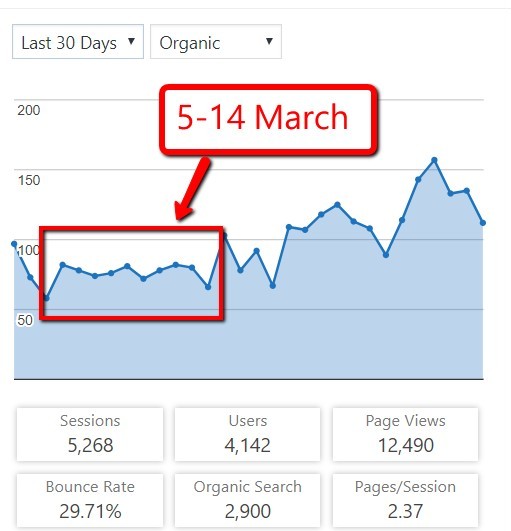 Thankfully, my rankings are back and the organic traffic is growing again.

If you're more experienced, these achievements may not seem huge to you. But if you're just starting out or you're struggling for something right now, I hope this can give you some inspirations.

Gonna go now. There are lots of work waiting for me to be completed and accomplished!

Reply Like Like You like this
gjshawk Premium
Hi, Jerry. Very inspiring indeed! And discouraging too. I've got 62 posts on my site, and no referrals all year. I'm only getting 4 or 5 visitors per day at the most so far. They're probably from site comments. I guess all I can do is keep forging ahead and wait with patience. It's great to see your success though!
Grant

Reply Like Like You like this
JerryHuang Premium
@gjshawk
Hey Grant, would you like me to take a look at your site? Maybe I can help you see what's not working or what should be improved...

Reply Like Like You like this
newmarketpro Premium
Congratulation Jerry.
That's something to start with and your organic traffic is ballooning. It just a matter of time to see real income. 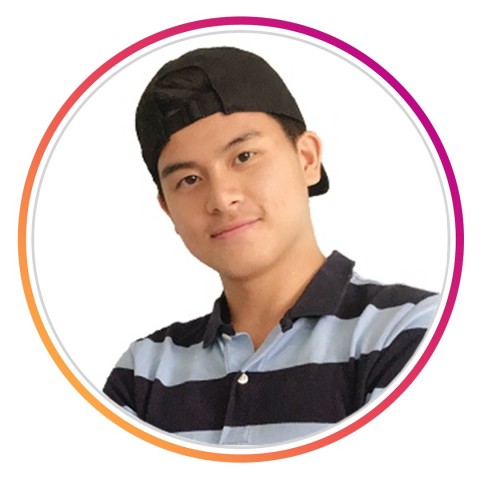