It Never Gets Old

I'm not sure whether it's the child in me or the fact that it justifies me staying indoors but when a blanket of snow descends, the way it makes me feel never gets old. There's a sense of being stranded, cast adrift.

When this happens, it allows the opportunity for us to do those things we've been putting off, either consciously or unconsciously, though the latter might be harder to find.

So, as we were walking the dogs this morning sometime around six-thirty, there was a slight amount of precipitation but nothing to write home about. By nine o'clock the world was like a snow globe that had been vigorously shook-up. 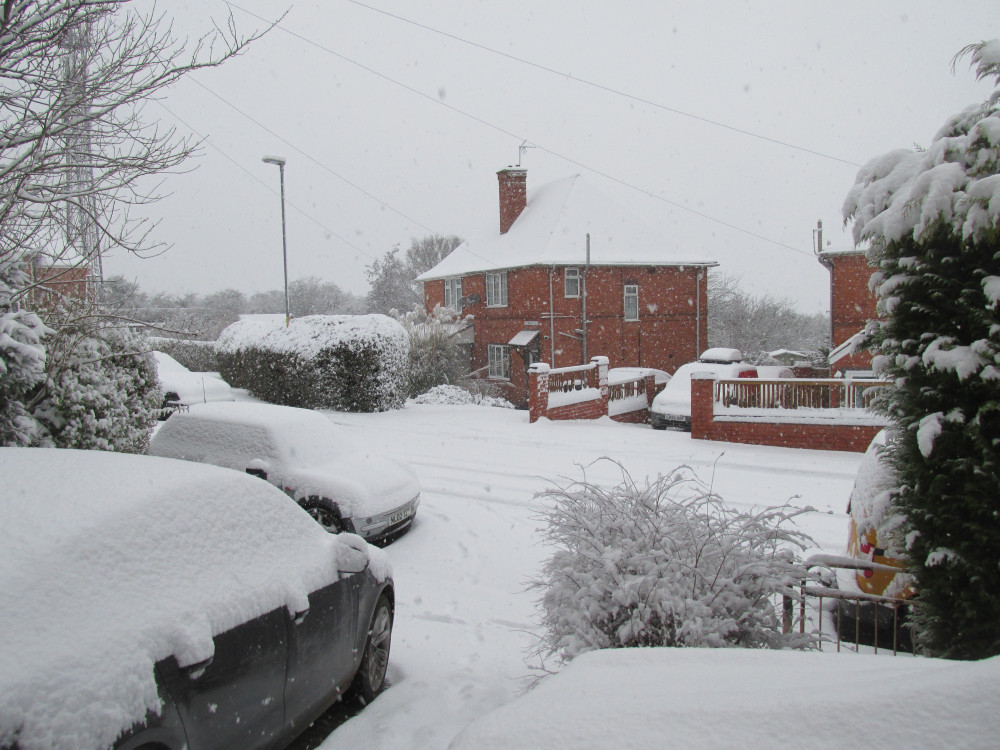 All bets were off, if any of them involved working outside that is. It's not a problem, I have plenty to be getting on with.

It's been a busy week, as I am sure it has been for all of you. I did have one brief excursion into the world of domain buying, have I already mentioned this? I don't think so, anyway, I'm not planning on retiring on the proceeds just yet.

Instead, I have put them to work by forwarding them to related pages elsewhere on the web and as they all have decent search figures, they might earn their keep.

One of them was too tempting not to see if it might be worth something, so I put that one up on Flippa, so we'll wait and see what happens, though I'm not holding my breath. In my best Ivan Drago voice "If it sells, it sells."

My thirty-day challenge has faltered a couple of times but not in a failing way, more in a 'forgetting to do it' way.

One more picture and this does relate to the challenge, of which a part is being present and acting rather than procrastinating.

It's not just about doing that job you have been dreading for months, it can be more to do with the endless supply of smaller things and the things that can make a difference to someone else's life, even if only in a small way.

One example, and it may seem trivial but we can seek to solve the major issues in the minor matters if we choose to.

Mealtimes have, and still are, an operation of necessity in our house. Creating a meal for six, day in day out, trying to make sure everyone's tastes are catered for while at the same time refusing to spend more than an hour in preparation, unfortunately, means that culinary flare takes a back seat.

Anyway, a few days ago, I was contemplating the next all-day special when it occurred to me that with a little extra effort I could whip up a roast dinner a la vegetarian style.

Without mentioning it to anyone I set about my task with a quiet resolve until it was time to 'dish up' upon which I called for the assistance of my fair lady. Wouldn't it be 'loverly'.

Plates were brimming and laps were filled and then it came time for the chef to season his own plate. It was one of those moments when I broke with my normal, customary condiment choice of just a light dusting of salt and went with the ground peppercorns, just to add a touch of heat to the roast potatoes.

When we look back and try to fathom out why things turn out the way they do, nine times out of ten you will find that there was a change somewhere down the line. "If only I hadn't done that" or "maybe if I had stuck to the normal routine" As we know, hindsight always scores perfect.

As I was grinding away with vigour, it rapidly became apparent that the dispensing end was no longer a snug fit and was, in fact, broken with no desire to hold up its end of the bargain and actually deliver a well ground portion of black pepper.

No, instead, it decided in a way only an inanimate pepper mill can, to offload its entire payload of whole, black peppercorns onto my plate, with a complete disregard for my food, by the way. 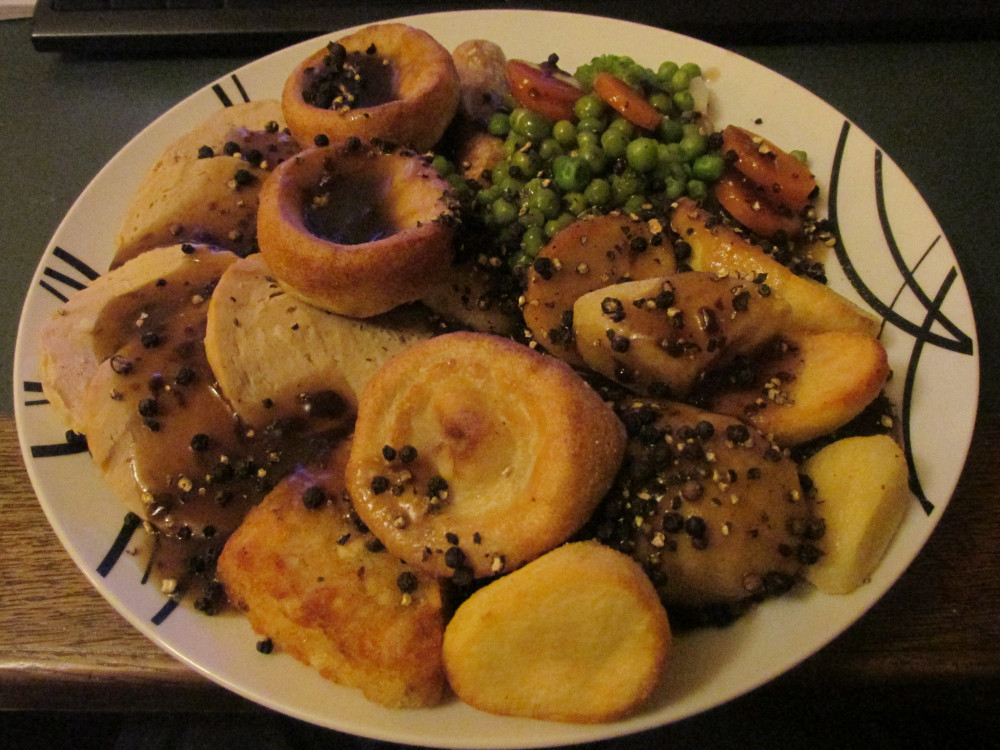 Yep, but you know what? I carried on and ate the lot, it took me a while to scrape each mouthful clean but I did it, I wasn't prepared to give that rogue pepper mill the satisfaction of thinking it had put one over on me, not a chance.

The closest time I can get close to snow, is from the photos posted here & elsewhere on the internet.

The plate looks incredible.
I am sure if you had wanted, you could have hand-picked- a pepper- or two off the plate. LOL

Reply Like Like You like this
Twack Premium
@DCarpenter1
Thank you, Denis, it pretty much came down to that, well, more of a 'scraping' than picking.
After all that, it was most enjoyable but I will be more careful next time.
As for the snow, this was the most we've had for a number of years and we were only talking recently about the possibility we wouldn't see it again, ah the 'Fates' they do enjoy playing with us.

Reply Like Like You like this
roysinOnline Premium Plus
I get the same feeling when it starts snowing, Twack :-) And our fur-baby goes bananas every time it snows. She loves it and it is hilarious undertaking taking her for her daily walks.

Is it nice when pepper and sal decide to do their own amount of seasoning your food? 😄.

I see the parallels to our business endeavours. Keep pushing forwards no matter what.

Reply Like Like You like this
Twack Premium
@roysinOnline
Thank you, Roy, good to hear that it's not just the Husky's that go berserk when the white stuff descends.
I would be lying if I was to say that I continue to season every meal with reckless abandon, I might be a tad more cautious over the next few mealtimes.
The 'expired domains' venture is something I keep forgetting about but it's so much fun and, if done properly (and some luck) can be very lucrative.
I do believe in multiple income streams, it keeps us on our toes.
Thank you for popping in Roy, greatly appreciated.

Reply Like Like You like this
Suzay Premium Plus
Snowing Peppercorns, still looks pretty good to eat, Twack. No complaining here, doesn't work anyways!
New rule, no laughing at the cook, only laughing with the cook.
Like the "Cookie" assigned cooking person on the Goodnight Loving Cattle trail, or other Old Wast Get them cattle to market trails.
Goes like this: everyone's job is to wrangle, AKA participate in the moving of cattle along a Long trail to a distant point where they can be sold and transported to market on the railroad. This would be when the west was wild.
But the cooks job was tougher. It included gathering firewood, didn't matter if there's rain or snow. It burns better dry though!
And being up earlier to get that Cowboy Coffee and breakfast going, putting out the food, and the clean up and stowing before going on again.
Evenings, fixing a meal for all the working guys. Rinse and repeat but there was no Dawn Detergent! And also Dawn come quickly, and rinse and repeat!
Plus the Cookie would have to take care of their own needs, laundry, etc. So it's work plus work! And if they shot some game animal, cook that too. Bad weather, whether or not, keep 'em fed.


Well this Cookie was getting sick of it, and they were soon to be going through Moose country.
Now here's the Rule, the Important Thing. A range hand must never complain about the food, or, Or, OR they become the New Cookie.
So this Cookie made a beautiful pie, using a moose turd.
The darkness of evening had already made it's way into the camp, as servings of pie were being passed along to everyone.

Well, it wasn't long before some one yelled, "This pie tastes like sh*t!" And the Cookie through off his apron, and proclaimed the Pro claimer, "Yes! You are the new Cookie!"
Or something like that...
Zay

Reply Like Like You like this
Twack Premium
@Suzay
Thank you so much for this Suzay, I have an early morning smile to carry me into the day.
I have a friend that refuses to do a couple of jobs within his profession. To make sure that he is never called upon he made sure that his past performances were so dire, he would never again be asked again and so far no one has.
As much as I like the idea you set forth, I'm not sure there would be any takers and to be honest, I have been doing it for so many years now, it would feel very strange to hand the apron over to someone else plus, at least I know what I am eating every mealtime.
Always a pleasure to read your comments🙏.

Reply Like Like You like this
HildeRegine Premium Plus
Do not talk to me about snow Lool :) I am so happy we had a rather snowless winter this year. Not having to shovel every day. It is cold , dark but not much snow yet. As I write this I look out the window and guess what? It started to snow. ......

Reply Like Like You like this
Twack Premium
@HildeRegine
I think the whole weather front must be working its way across from west to east, today we have clear blue skies and lots of thawing going on.
Hopefully, those clouds won't have much left in them for you.

Reply Like Like You like this
Linda103 Premium
I love snow. I agree with Alex, it is magical and transformational. When its coming down thick and fast I like to stand outside and feel the peace. It blankets the world in silence and makes me feel like I am the only person in the world, such peace!

I see the snow is falling
an insistent voice calling
the silence is encompassing
as the flakes are massing
covering everything you see
from ground to the tallest tree.
The silence is all around
the greatest peace to be found.
I love it when the world turns white
such a wondrous magical sight.


Well done on roast, shame about the pepper. To be honest, I had to laugh. I have seen it happen so many times. So glad I don't like salt or pepper, lol.

Reply Like Like You like this
Twack Premium
@Linda103
Beautiful prose Linda, thank you for that.
The fog has a similar effect when we're out on the fields, it dampens the sound, it's an eerie feeling.
I think my face must have been a picture but I was very controlled and remained very calm😂.