The journey of Getting Back to WA Soon

So much has happened and I have had to be away from WA and my website but I hope to be back at it soon. Summer was filled with family events and obligations that took up a lot of my time. I tried working for a while and that turned into something unsuccessful for me. It was also time for me to think about selling my house.

That meant getting it cleaned and fixed up. November came and it was time to pack up as much as I could and put it in storage to make the house presentable to show. Finding a moving company to take my 20+ years of stuff and storing it was a challenge. Then finding a Realtor and completing the many tasks required to get a good sale price for my house was another stressful challenge. Finally Jan 5th came, the day my house went on the market. It was a Friday when the listing was public. I had three people interested immediately and scheduled showings.

Getting out of the house meant finding a place for us and the dogs. We had a new puppy in the house and all that comes with a new puppy added more stress. Little did I know just how much more stress that was going to bring. I expected that it would take some time to sell the house and that I had some time to get a loan and find a new house. Well I got an offer on the house the Saturday following the first showing and then a second offer with one still in the wings. Needless to say I was shocked and unprepared to get an offer so fast.

Searching the internet for hours looking for something I might be able to afford and that fit my needs caused a lot of anxiety. I knew that I would need to move out of the area I was living in to find something I could afford and that did not need lots of work. Still waiting to see if I would be approved for a loan my Realtor took us to see a few options for houses I might be interested in. The first house we looked at was discouraging at best. The pictures of the house looked good yet when we toured the house it was a disaster. My doubts and fears were raised to the possibility that I would not be able to find anything suitable in a price I could afford.

We moved on to the next house. A 1930 4 bedroom house with a garage and a small shop. After the last house I did not have high hopes that this one would not be a disappointment as well. As we drove up the outside appearance was encouraging. It had a detached garage and shop. Not the kind of building I had been wishing for but it definitely had the space I needed. The house itself looked very nice and well kept. There was also a wrap around deck and a new roof. I have always wanted a wrap around deck so this was a plus in my mind. I hoped that the inside would be clean and nice enough to live in.

My first impression was awe as I took a step into the house. This house was not just clean and nice it was beautiful. Very well preserved and yet updated. Features that I had only dreamed of but never ever thought I would have. The care the current owners had put into this house were shinning through and warming up my heart. But I knew that this house was at the very top of my budget and so after spending a considerable amount of time looking over the house and talking with the owner we moved on to look some more.

The rest of the houses we looked at were a let down after this house but none near as bad as the first house we stopped at. We evaluated each one as to the need that it provided and those needs that it would not meet. Some would be able to work with adjustments from us others were dismissed, none were as exciting to me as the second house we looked at.

After that came the ups and downs of getting approved for a loan. There were many days of deep uncertainty thinking that I would not get approved at all. Many days were spent looking into other alternatives in case the loan would not come through. Two weeks or more came and finally I was approved for a loan. I would be able to afford the house I loved. But then came the conditions of the loan. I would need to obtain home insurance for this new house and little did I know this would be very difficult and it could prevent me from purchasing this house or any house at all.

You see that new puppy that we adopted was an American Pitbull. We got her when she was six weeks old. We signed up with a veterinarian to make sure that she was getting all of her shots and she was healthy. We could not attend any socialization or obedience classes until she had all of her shots. The listing for the house that I loved said that it had a fenced in back yard but when I looked at the house the fence had been removed. I knew that I would need a fence and thought that after I purchased it I would put one in. This puppy became a real problem to the insurance companies.

Many of them just said no we will not insure you. No discussion not any considerations! I was in a panic without this there would be no possibility to purchase a home. After making call after call American Family insurance said they would talk with me about insurance. I would have to meet certain requirements for them to be able to help me. One of the issues was no fenced yard, another was that she had not had all her shots and another was that she was not spayed. Although we were following the veterinarians schedule for vaccinations to date there were a few she had not been ready for due to her age. And she was not scheduled to be spayed until six months of age. After emailing the insurance company and submitting documentation about the puppies vets visits, vaccinations, future appointment to be spayed and coming to an agreement for a temporary containment system until a fence could be put in the insurance company finally agreed to provide insurance to me.

Again excitement raised and my hopes were new. I would be able to get my new home. Now I have to complete home inspections, testing, and going through the title company. I hope that all will go smoothly from here on out.

While I was waiting for the insurance company to call me I had sat down to pay bills and update those I owed that I would be moving. After the excitement of hearing a yes answer from the insurance company had decreased a little I realized that the puppy was not in the room with me. She was normally at my feet or in her basket. People had been coming and going through out the day but she always stayed close. I went looking for her, thinking she may be getting into something. I realized that I did not know how long she had been gone. I never leave her outside alone and she never goes out the front door without her leash on. I searched the house, called her name over and over. She was gone! Panic set it. How could I lose her? I had not taken her outside and had not gone out the front door. Could she have slipped out the door during the many visitors we had had! I really did not think so yet there was one that let themselves out so I could continue with a phone conversation that had been interrupted.

I ran out the door screaming her name, looked up and down the street, asked everyone that I came to if they had seen her. No one had seen her! Finally I called my son in desperation and told him to come home I had lost the puppy! He tried to calm me down but I could not be consoled. How on earth had this happened! My son was going to be devastated and it was going to be my fault! The insurance company would think all I had just done to get insurance for her was suspect. I truly was in an hysterical state.

As we walked in the front door I heard a voice say I've got her! I cried and ran to the voice. My oldest son had come over to help search but first he would look over the house once more. He was upstairs holding our puppy! She was never out of the house at all but shut in a bedroom sleeping! I had searched every room but that one thinking I had not been in there since the morning inspection but later I would remember that I had.

We realized just how much we loved this puppy and want it to be part of our life. She offers so much energy and excitement to our lives. I really hope this is the last of the surprises that are in store for us as we move into our new home. I long for the days where there will no longer be appointments to keep or tasks to be completed, and I can just sit in front of my computer again. For now I must finish this journey. I will be back soon. I look forward to it.

Write something…
Recent messages
RobinTheresa Premium
Just after I wrote this my husband went into the hospital with congestive heart failure and pneumonia. He is home again but with oxygen. We have found another house because the first house had too many problems. We will have to find another place to live for 2 weeks while we wait for the new house to close. Life just moves on. Thanks for the comments. Robin.

Reply Like Like You like this
Judy-B Premium
You have been having quite a time. So glad it sounds like things are calming down. The puppy sounds sweet and I think the insurance company is well, just silly. Anyway, nice to see you back and best wishes as you make the finale move. :)

Reply Like Like You like this
jazminf Premium
You've really had a busy couple months, a lot of ups and downs. Thank God things are starting to settle down now. Congratulations with your new house and for finding your puppy:)

Talk about a journey the last couple of months. No wonder you have been around or been able to work on your business. I'm just happy things have worked out for you!

Good to have you back and congrats! 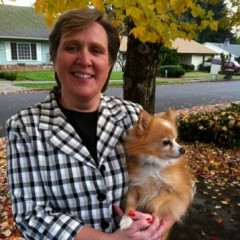 6Years
View RobinTheresa Profile
Follow robintheresa
RobinTheresa's Posts
13 posts
View all
Proven success for Increasing Se...
4 comments 4 likes
The benefits of a free week with...
6 comments 18 likes
Visual & Text View of a web page
12 comments 9 likes
Include 5 senses in your writing...
5 comments 7 likes
I am finally back with WA and se...
23 comments 13 likes
The journey of Getting Back to W...
8 comments 5 likes
Negative Reviews to WA
26 comments 34 likes
Course 3 Finished, Reflections o...
13 comments 9 likes
Where I am today and where I nee...
14 comments 11 likes
Site changed from WA to My Domai...
2 comments 3 likes
Hold Tight!