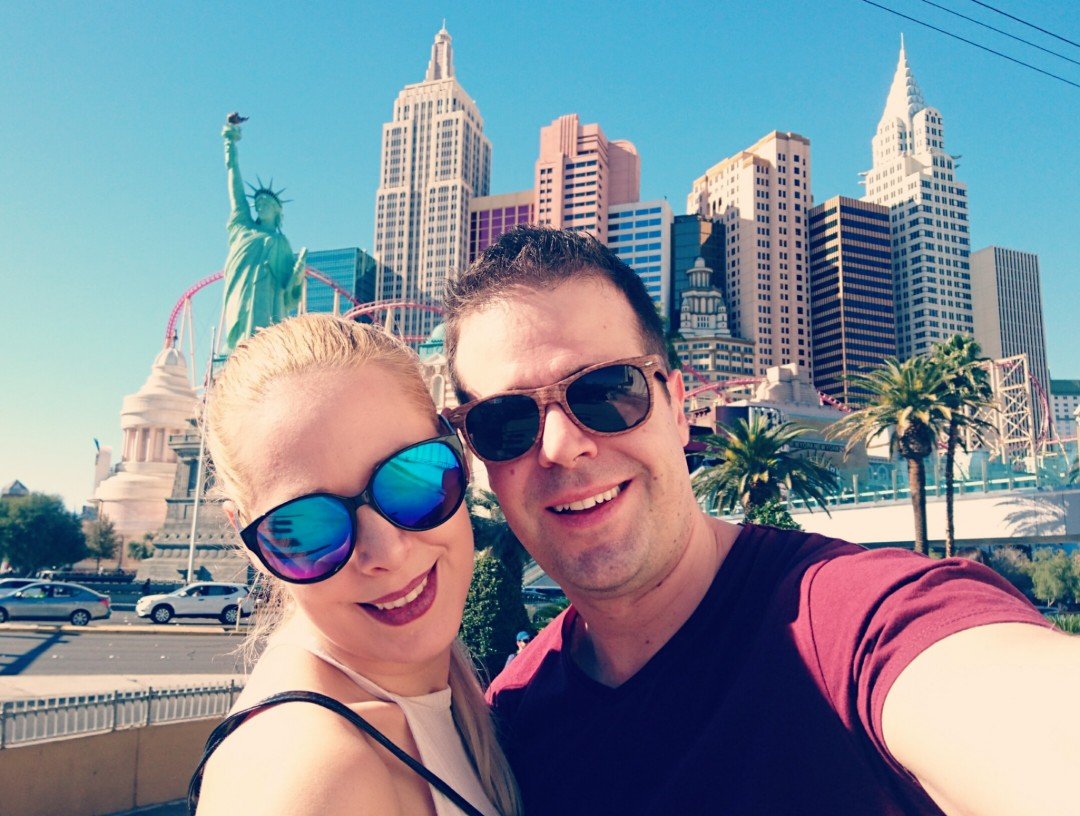 My wife, Misa, tagged along and we had the best time ever...memories for life from start to finish. Hard to describe the whole experience by words, but I will try :)

The conference officially started on Monday 5 February with an evening meet and greet. As we were traveling from central Europe (=long flight and 9 hours time difference), we flew in the night before.

Our journey started in Prague on Sunday morning local time (midnight Vegas time lol). There are no direct flights from Prague so we had a 7hr layover in Copenhagen. Luckily they have their airport very close to the city centre so we jumped on the underground and went for a short exploration of Hans Christian Andersen’s home town. We saw a few castles and went for a tower excursion with a 360 degree view over the city.

What we liked most though (despite the cold weather and snow) was Nyhavn. Coincidentally ranked #1 on tripadvisor among things to do in Copenhagen. If you google Copenhagen images, most of them are from Nyhavn...a harbor surrounded by colorful buildings. 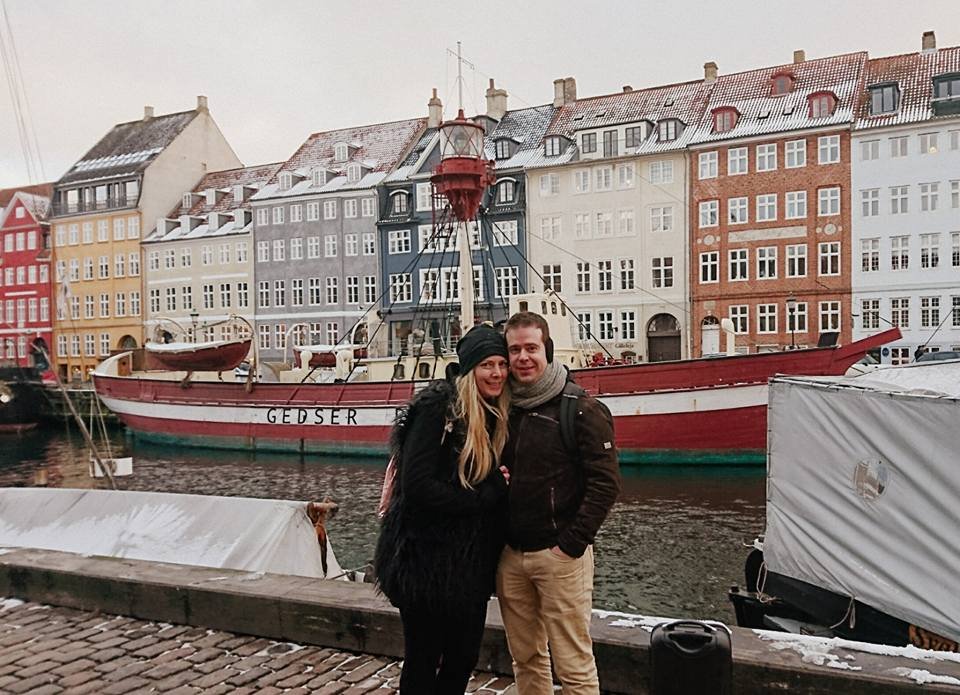 In the evening we boarded our 11hr flight on a Boeing 787 dreamliner (very nice and comfortable airplane despite flying with a low cost airline). A funny fact...all non-US citizens were interviewed at the airport (despite having ESTAs approved) to determine if they’ll be let into the country. This included us and we were asked about our work, sources of income, plans in US, where we’re staying, etc. Luckily this went fine and we were approved.

Around 9pm local time, we landed in Las Vegas. Took a bit of time to get out of the airport (lines, finger printing, etc). But the airport is super close to the strip, which is really convenient. We got an Uber and our hotel was only a 15 minutes ride away.

Around 11pm we checked in and arrived at our room. Super comfortable and very large (thank you Kyle and Carson). Pretty exhausted as this was 8am Prague time so we did some necessary unpacking and went to bed. 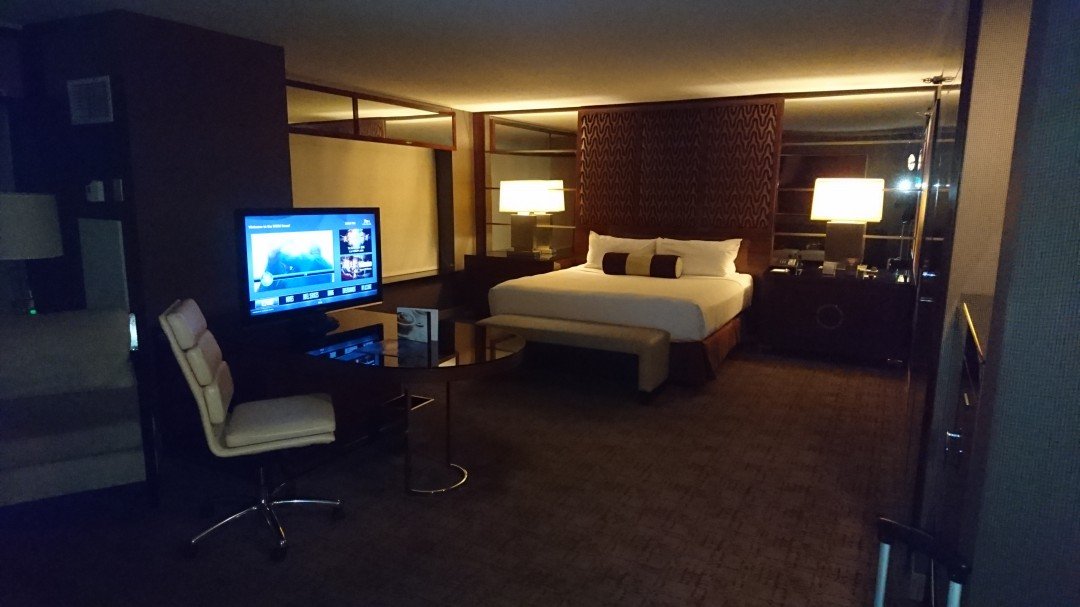 Monday was pretty much all about acclimatization and exploring the hotel (apparently it’s the largest hotel in the US and 3rd largest in the world). After a very unhealthy breakfast lol...we went outside to explore the nearby hotels and sights. The sunny 25 degrees (77 Fahrenheit) was a nice change to the freezing cold back in Europe. 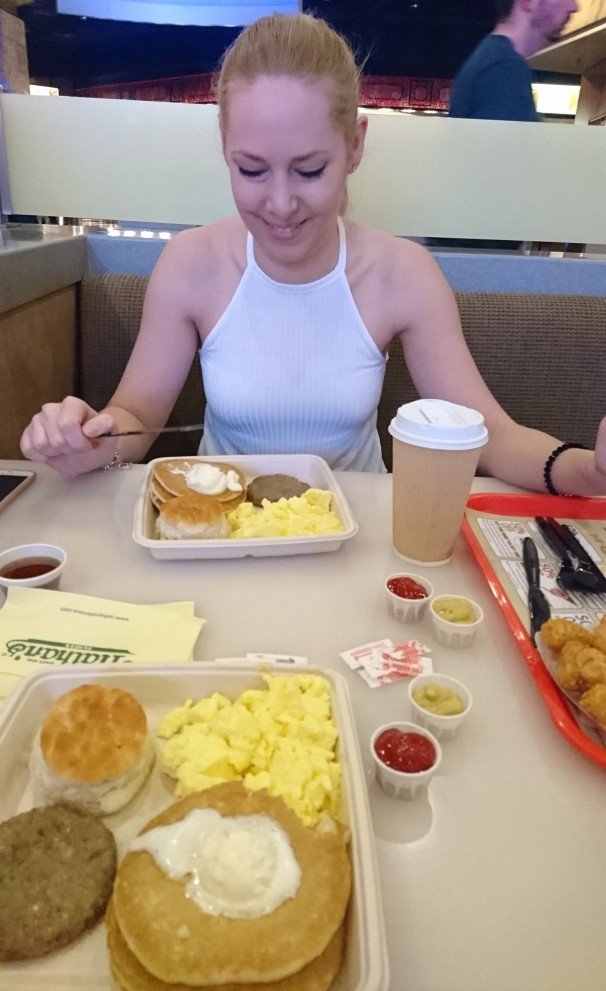 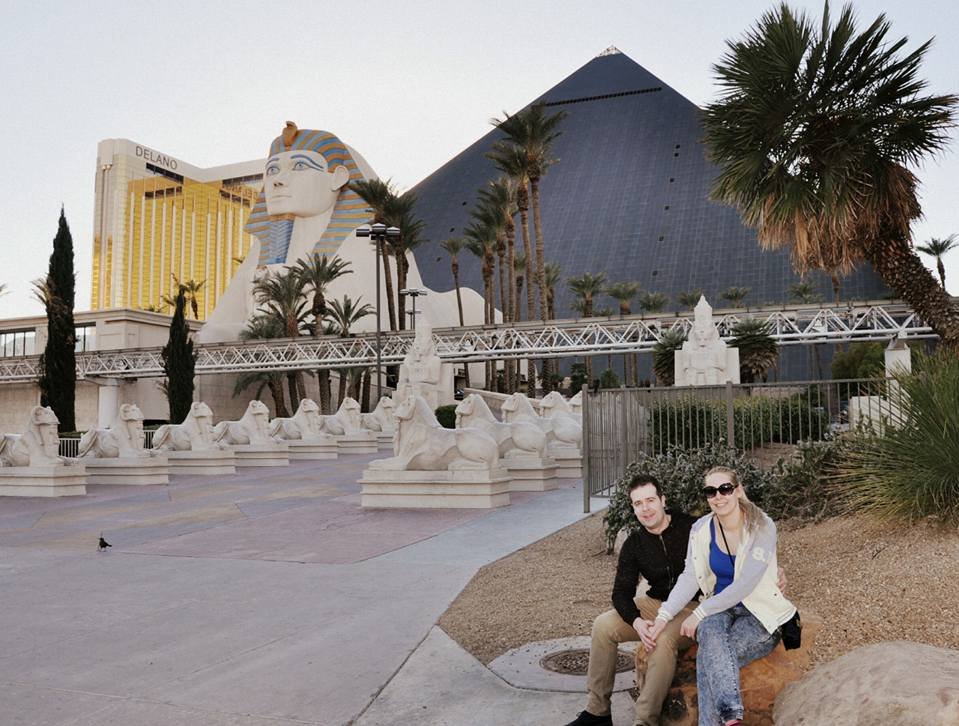 In the evening we had our meet and greet with all other conference attendees in the Skyloft. I must admit, I was really nervous...being here the first time meant I would meet Kyle and Carson and several of the other big names from the WA community face to face for the first time. Everybody were super friendly though and it was a delight to chat over drinks and learn to know the stories of others...were they came from, how they got started with affiliate marketing, etc.

As I was still jet lagged, I went to bed quite early to get some sleep before the group conference next morning.

Tuesday morning we met in the Skylofts again for the first conference session. We reviewed the previous year, discussed issues and opportunities, Kyle and Carson presented plans for 2018 and what is in development and everybody had the chance to provide feedback. I cannot go much into detail on what is coming later this year. But I can tell you that I’m super excited. Honestly I had two ideas, that I thought would make WA beyond awesome...but I thought it’s probably just wishful thinking. However before I even had the chance to present them, Kyle and Carson announced them as part of the new features to be rolled out in 2018. I was blown away!

On Tuesday afternoon I had my 1-on-1 meeting with Kyle and Carson. It was very cool to have a chance to take a deeper look together on my activity, affiliate income and how to improve and optimize my campaigns.

After this, me and Misa walked to the Welcome to Vegas sign, which is a very popular photo point with groups of tourists taking pictures literally 24/7. 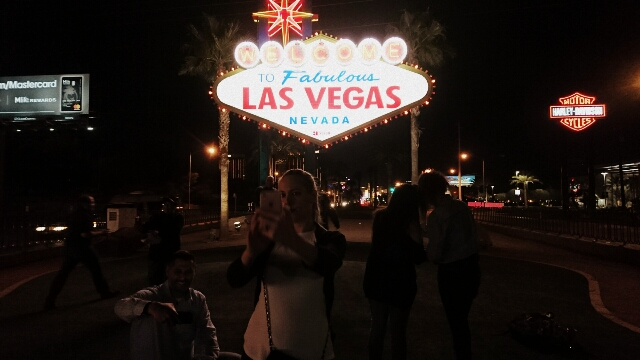 In the evening we met up with other conference attendees in the hotel lobby for a surprise activity. There were limousines waiting for us at the hotel and took us to Bellagio, where we first had a drink and then went to the Prime Steakhouse. We tried tons of appetizers and as main course I chose a dry aged prime steak, which was probably the best steak I ever had. End enjoying it in great company and the Bellagio fountains outside...just amazing! 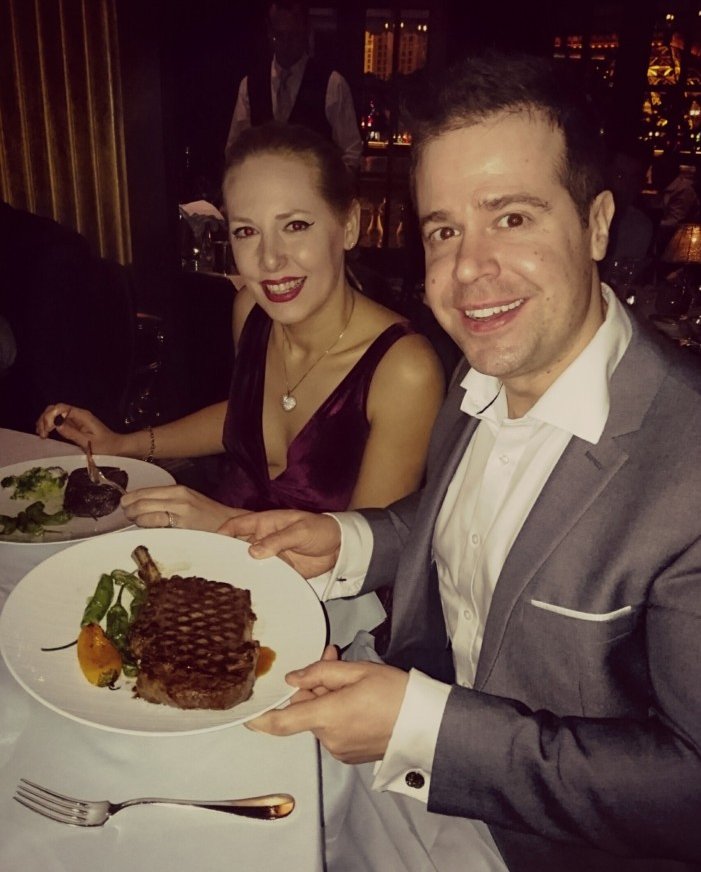 The next day we continued conferencing and discussing all amazing updates for 2018. In between the conference and another evening surprise activity, me and Misa went to the Shark Reef Aquarium at Mandalay Bay. I have been to the largest shark aquarium in Europe, located in Budapest...but this one tops it! 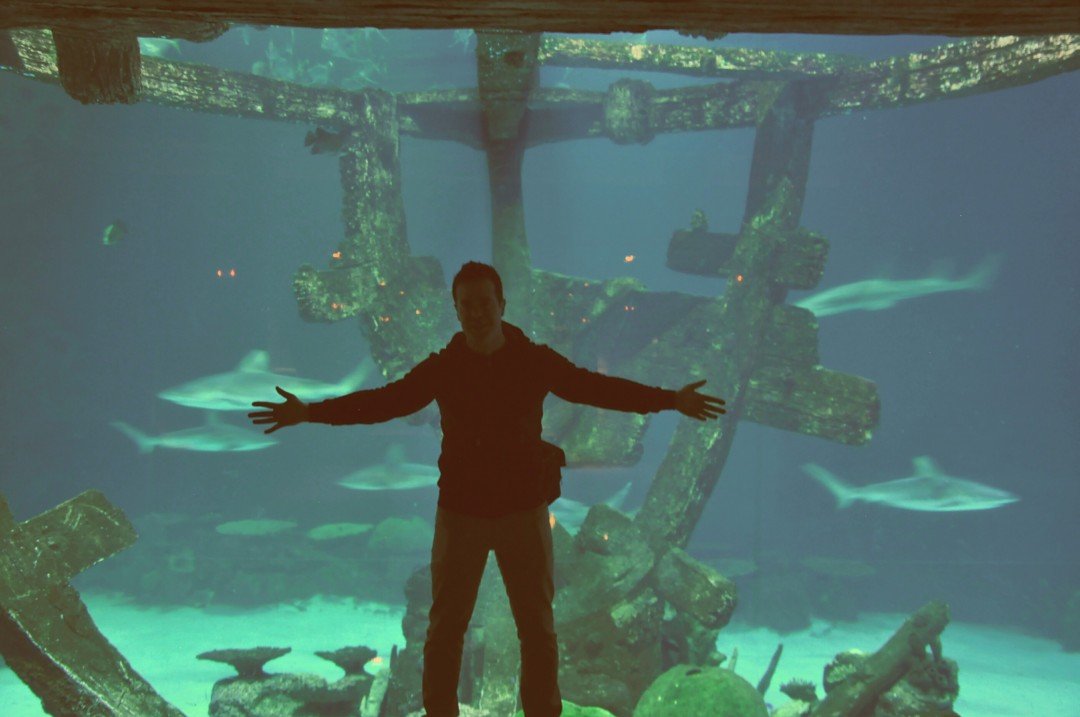 Back to the hotel and meeting up with the group. The activity for tonight is Topgolf and tons of food and drinks. Amazing experience...I’m never playing normal golf again as this was super fun :) Views of the High Roller and night time Vegas in the background, 200 yard arena, lots of delicious food and drinks, large screens everywhere, pools, bars...amazing! 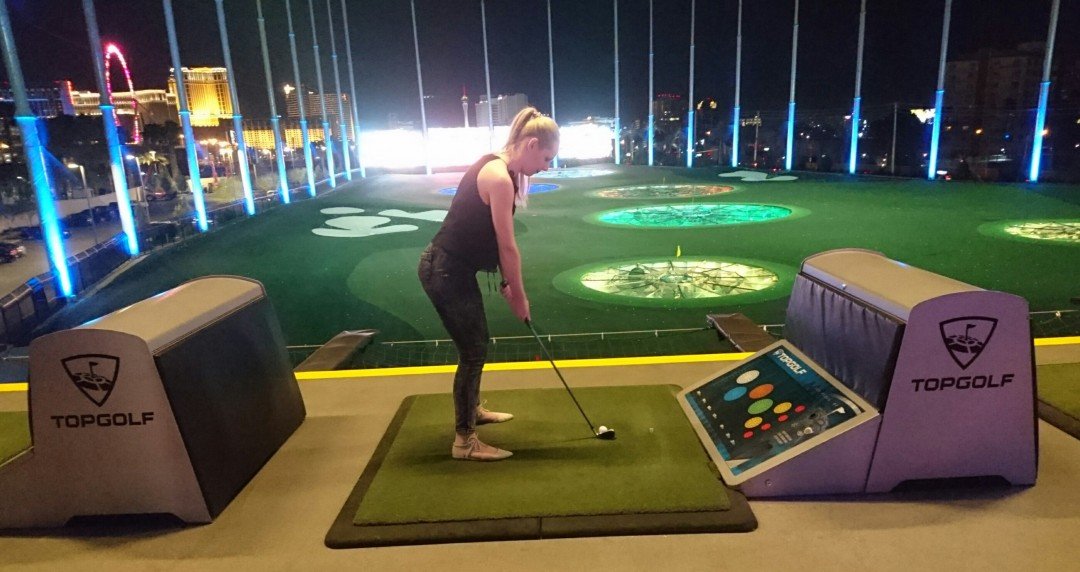 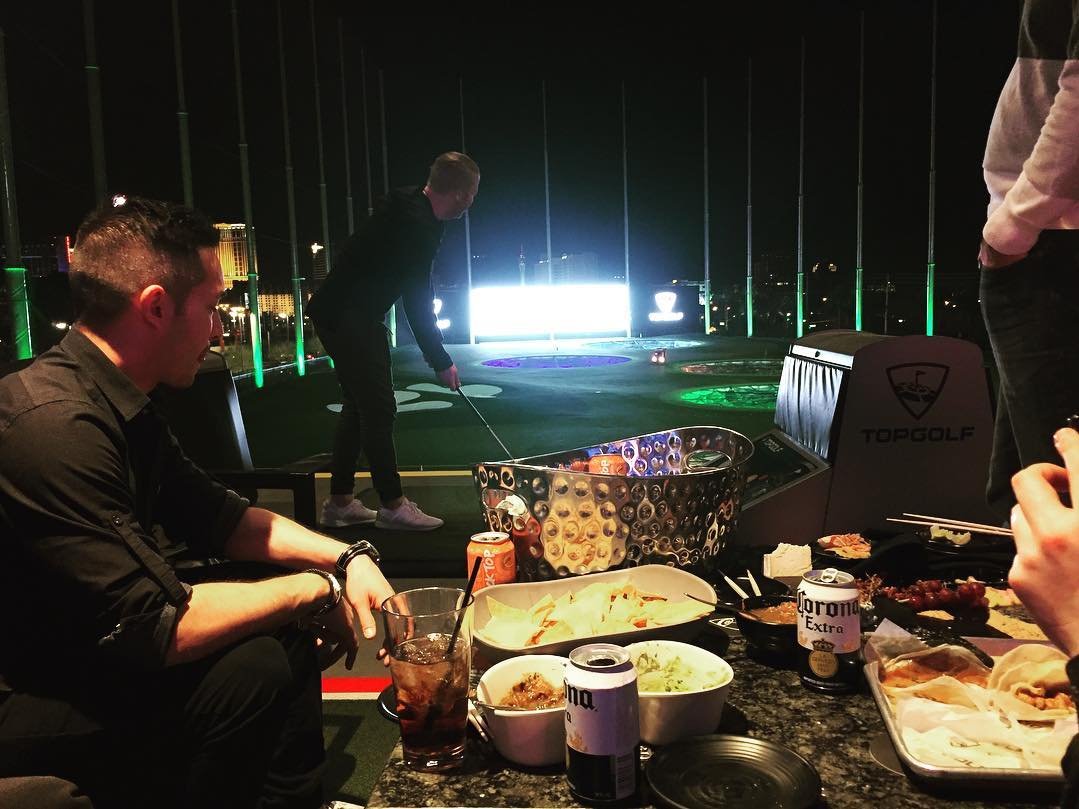 On Thursday we had the day off and the plan was to meetup with the group in the evening for a goodbye surprise event. We took advantage of the free day and went to a shopping outlet in Fremont. I got a bunch of gifts and souvenirs for friends back home. But Misa got serious and ended up getting a Lagerfeld handbag, three pairs of shoes and two bags of clothes lol :) The prices were just too good to resist. For example the Lagerfeld handbag was $150 and in Europe it retails for $450-500.

Ok back in the hotel and everybody is anxious to find out what surprise Kyle and Carson have prepared for us. Again, limousines are waiting for us at the hotel and we’re heading in the direction of the Mirage. 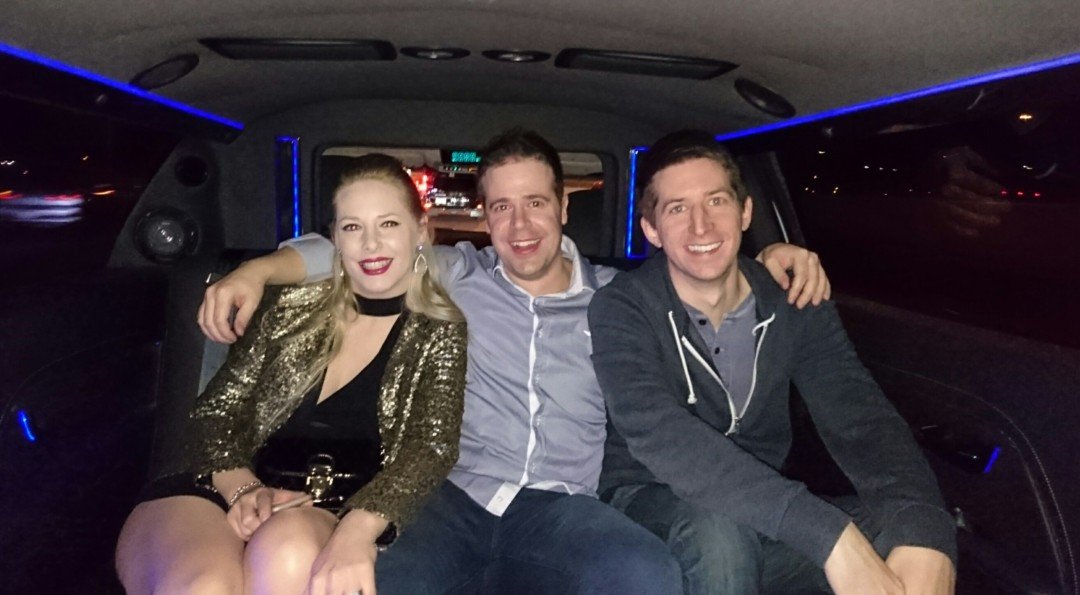 We’re escorted to a beautiful Villa, where Kyle and Carson welcome us. This place was simply amazing...indoor and outdoor jacuzzis, swimming pool, fireplace, barbeque, WA branded cornbag games...and remotely controlled toilets. I actually caught myself going there just to play with it lol :) 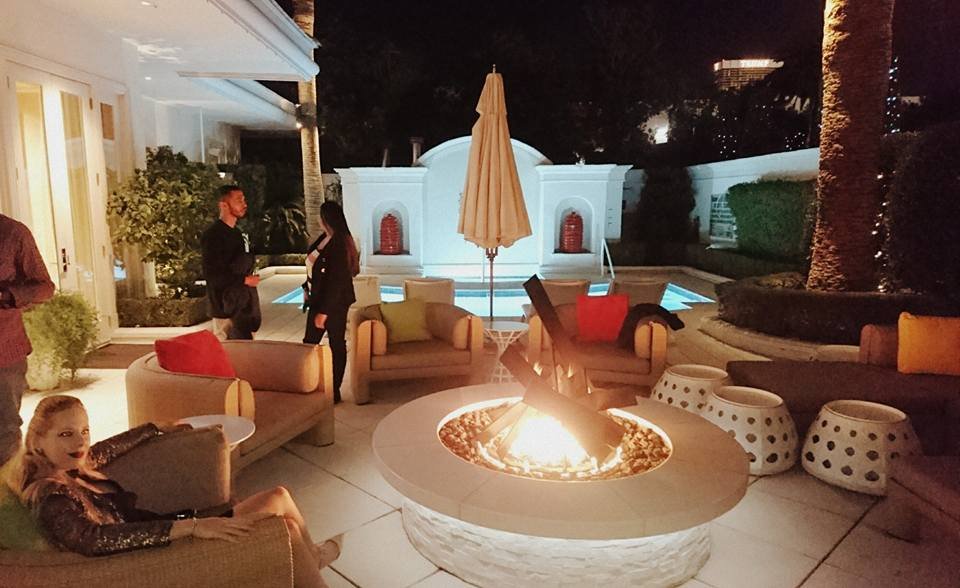 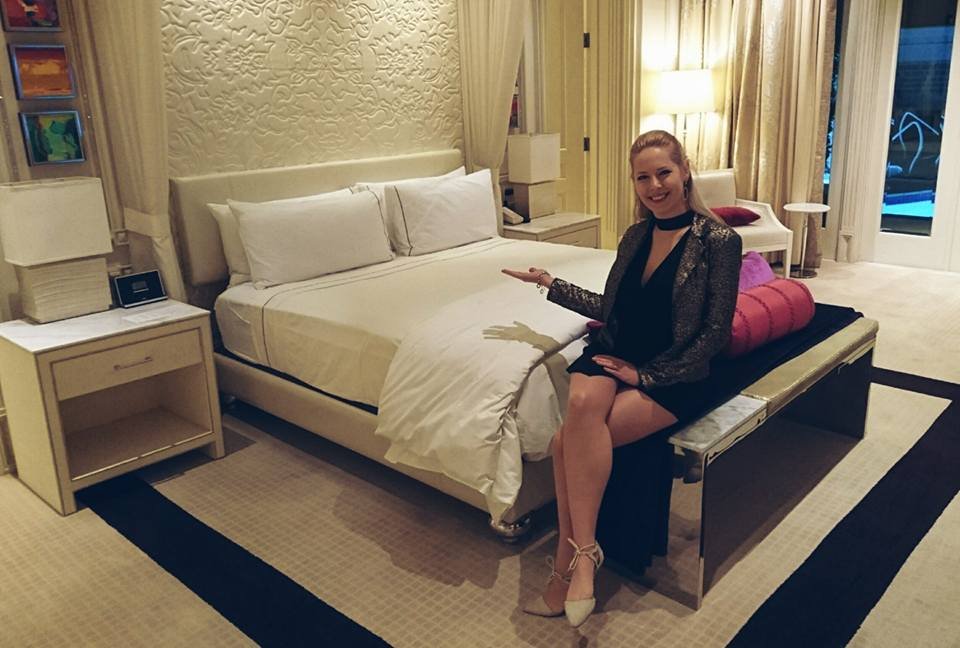 I later out found out that shortly before us, this Villa was used by Michael Jordan for his birthday party.

A delicious buffet awaits us and as we’re all finishing our dinner, the magician Nick Ivory shows up and starts a very entertaining and fun magic show. Throughout his performance, he engaged everybody and all of us loved him. Best magic show I have been part of so far!

The evening continues with drinks, chatting, corn bag games, celebrating and saying good byes to those leaving the coming day. 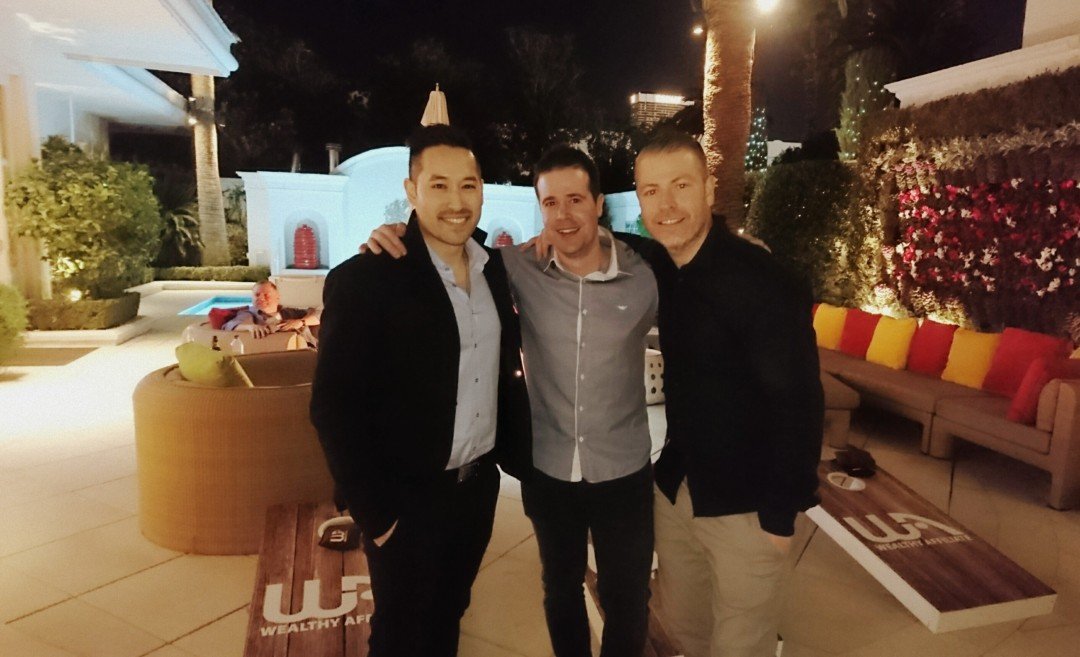 Mine and Misa’s flight back is not until Sunday, so we have two extra days. On Friday, we went to the Grand Canyon. A bucket list item for me and it was breathtaking! 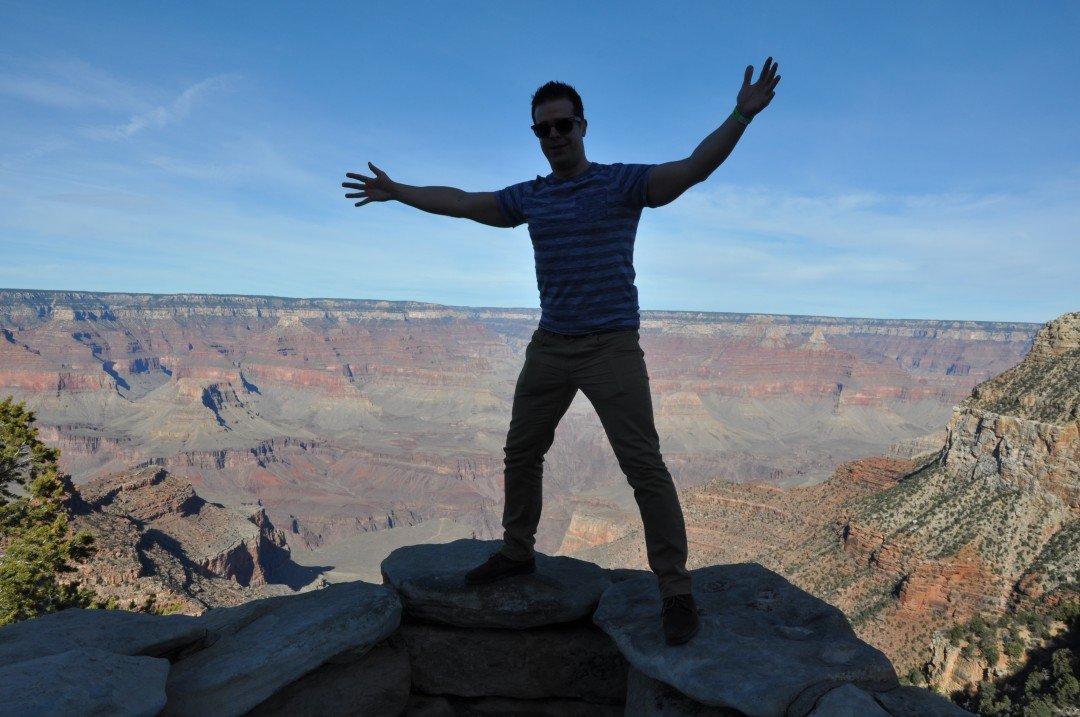 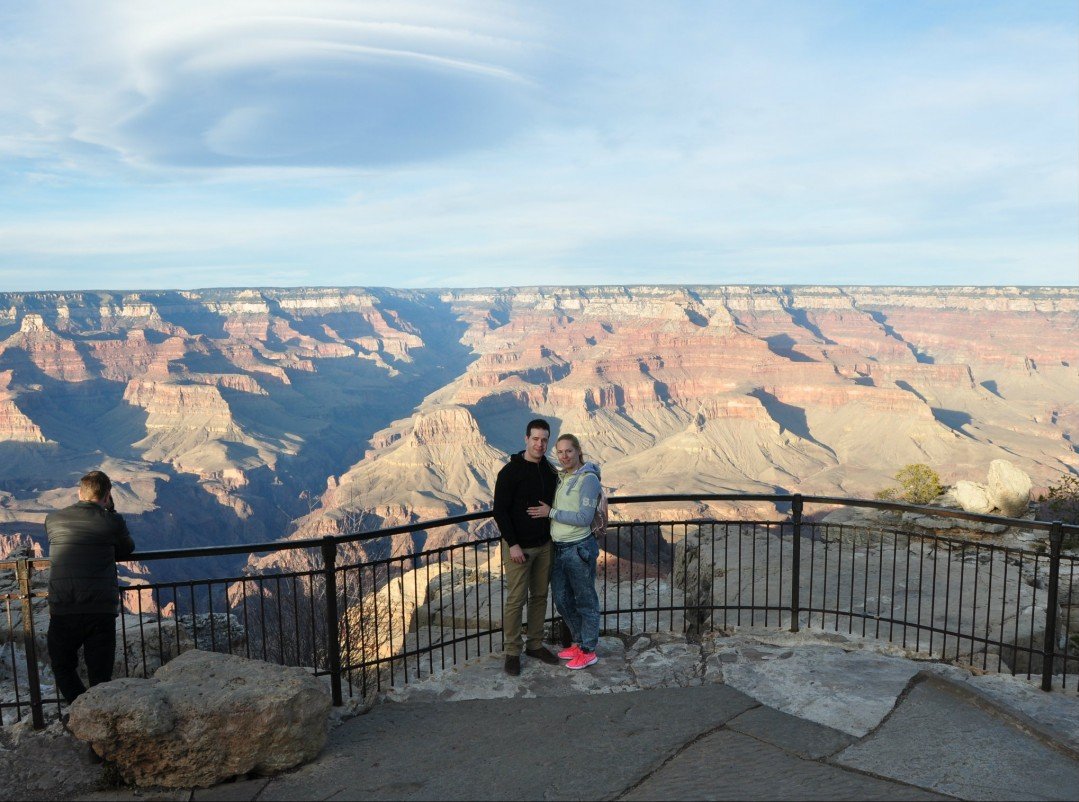 On Saturday we went to Siegfried & Roy's Secret Garden and Dolphin Habitat. We especially loved the dolphins...so cute, well trained and funny! 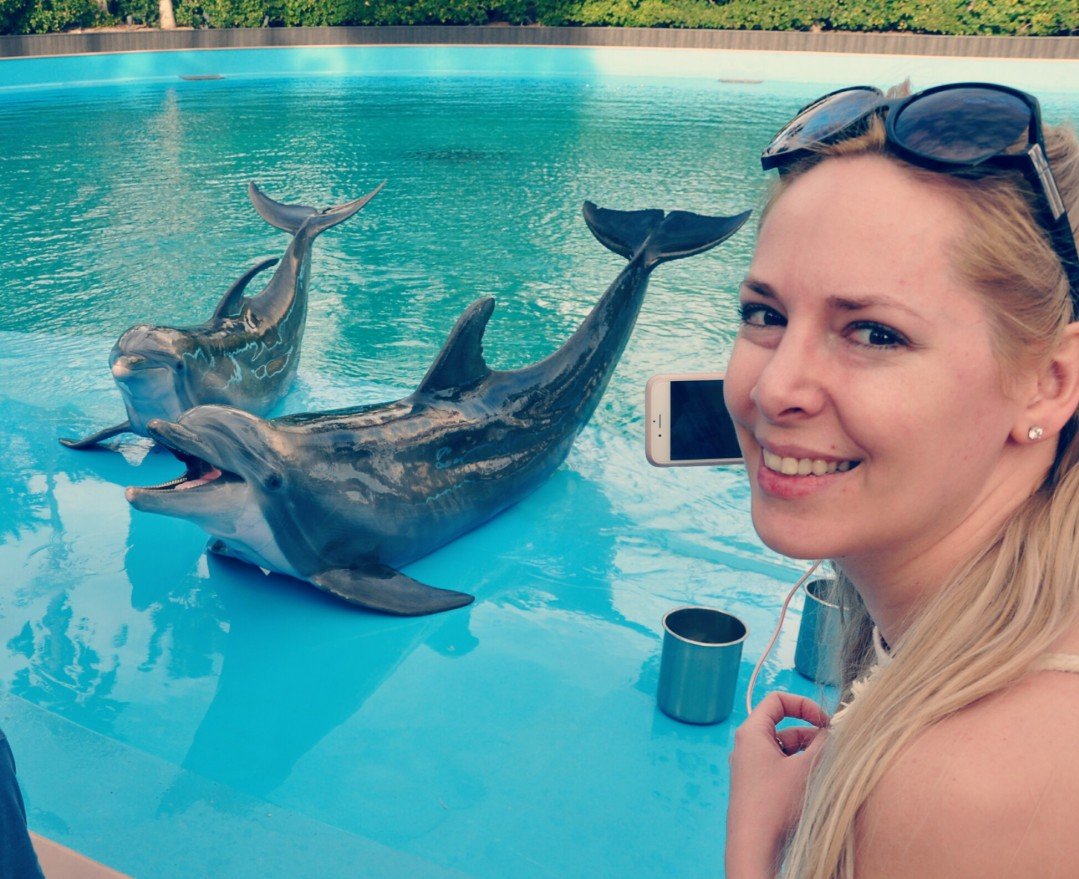 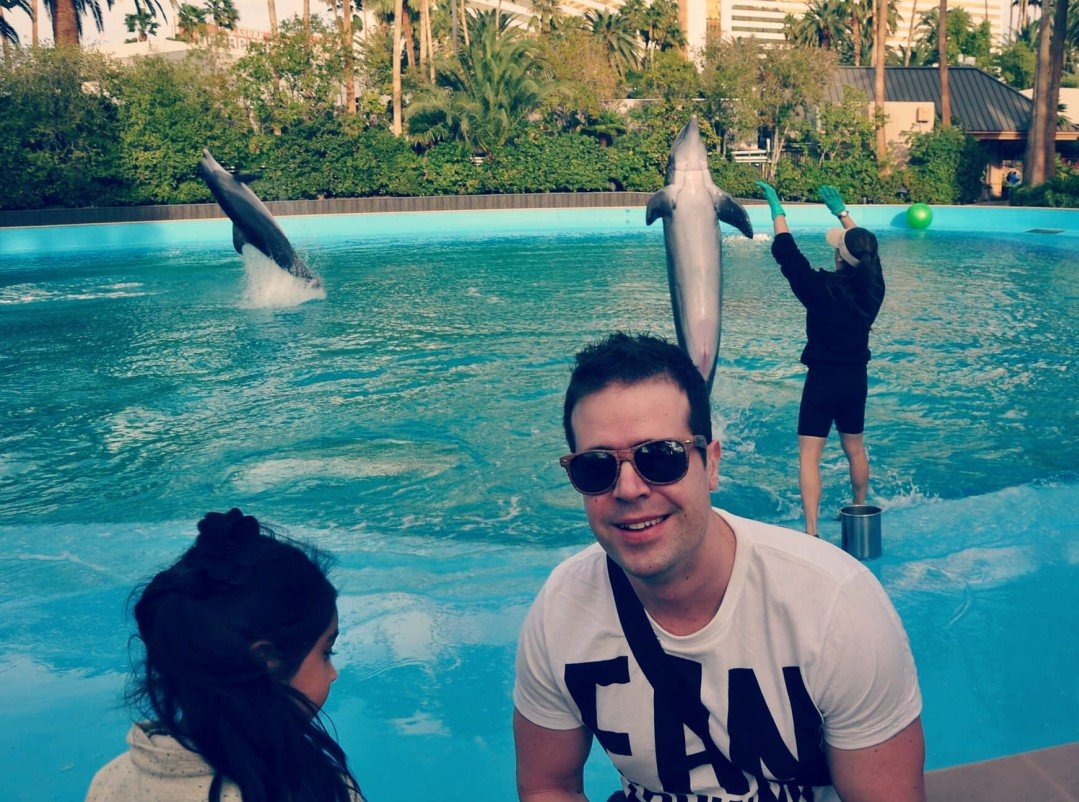 In the evening we went and saw a Cirque du Soleil show. They do several shows in Vegas and we really had a hard time choosing one, but ended up going to Michael Jackson ONE. We were blown away...amazing fantastic show! Misa is a stage actress and singer so she knows a thing or two about performing. In her words “So this is what I call a show! Best one I have ever seen...” :) 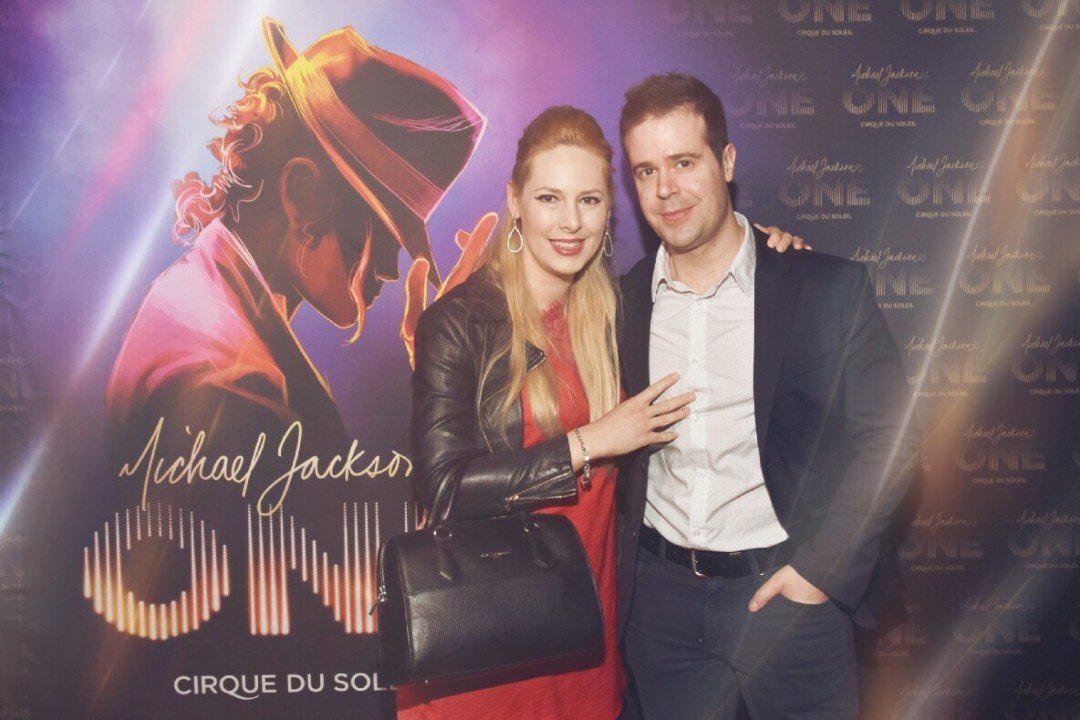 This is our last night in Vegas so we took a cab down to the old Vegas - Fremont Street. Wow this has like a complete 180 turn compared to the Strip, where all the over the top and luxury hotels and located. In Fremont, you’ll find all of the old casinos that set the foundation of Vegas as Sin City. Several blocks of the Fremont Street are covered with the largest video screen in the world, projecting a show every hour. 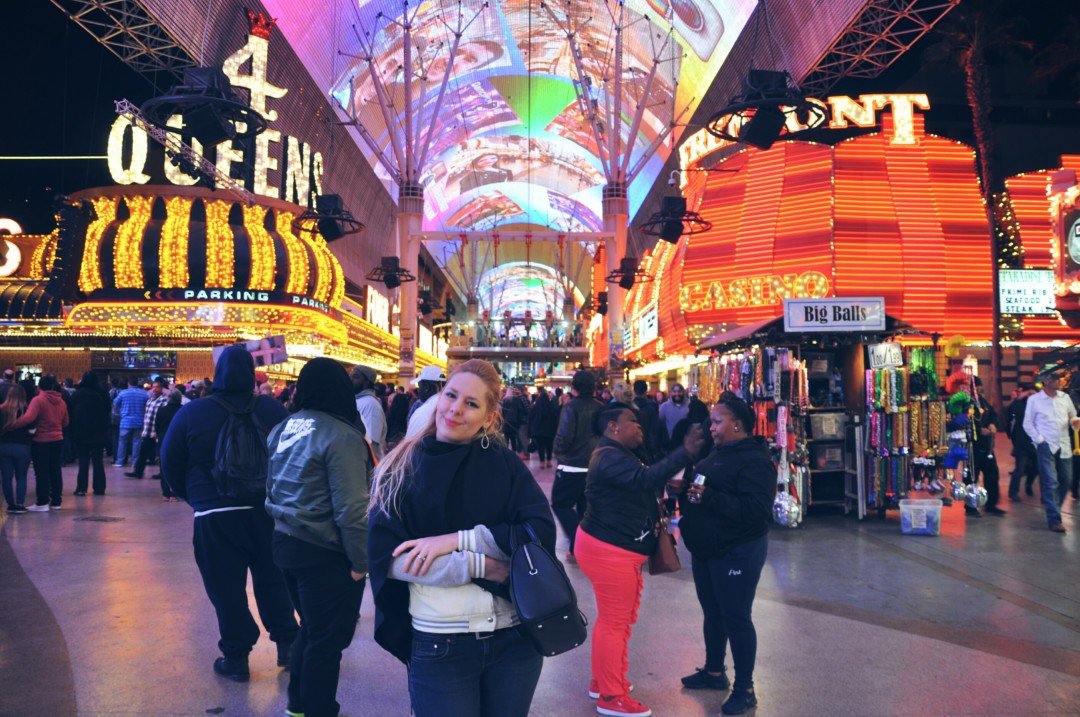 Above us there is also a zipline and there is a stage literally on every block with singers, music bands and artists performing. Amazing experience!

Funnily enough we didn’t do any gambling until the day of our departure. We had a few hours to kill before our flight back home so we went to the Hooter’s casino, as they had the lowest limits on table games lol :) And we enjoyed $5 roulette for quite some time. In the end we actually made a bit of money so went and spent in on slot machines. So in the end we can brag about gambling in Vegas :) 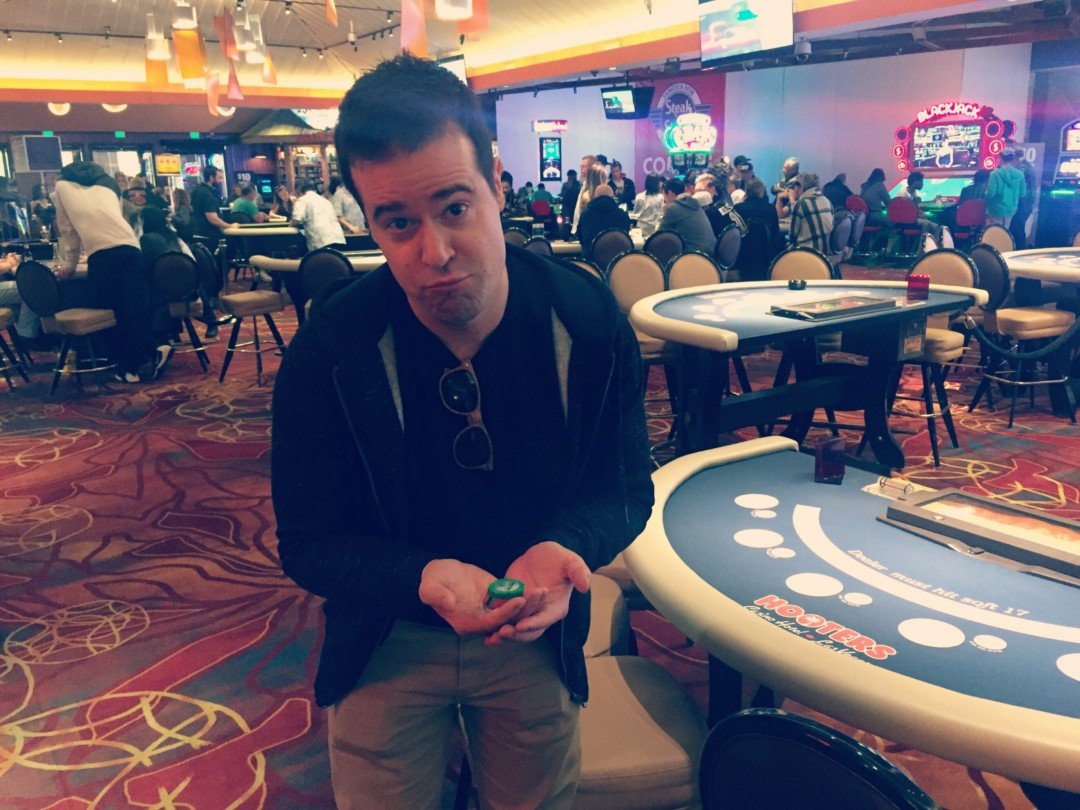 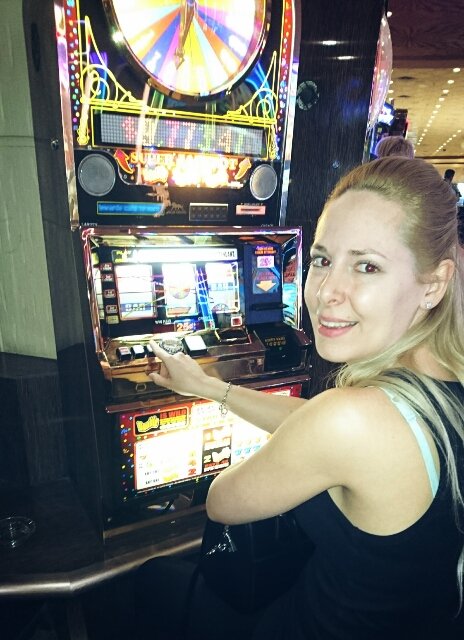 On the airport during our check-in, I bumped into Dennis Wolf aka The Big Bad Wolf. Most of you won’t know him unless you’re into bodybuilding and fitness. Simply said, he is one of the best professional bodybuilders in the world, winner of Arnold Classic and regularly qualifying for Mr Olympia. This guy is HUGE! 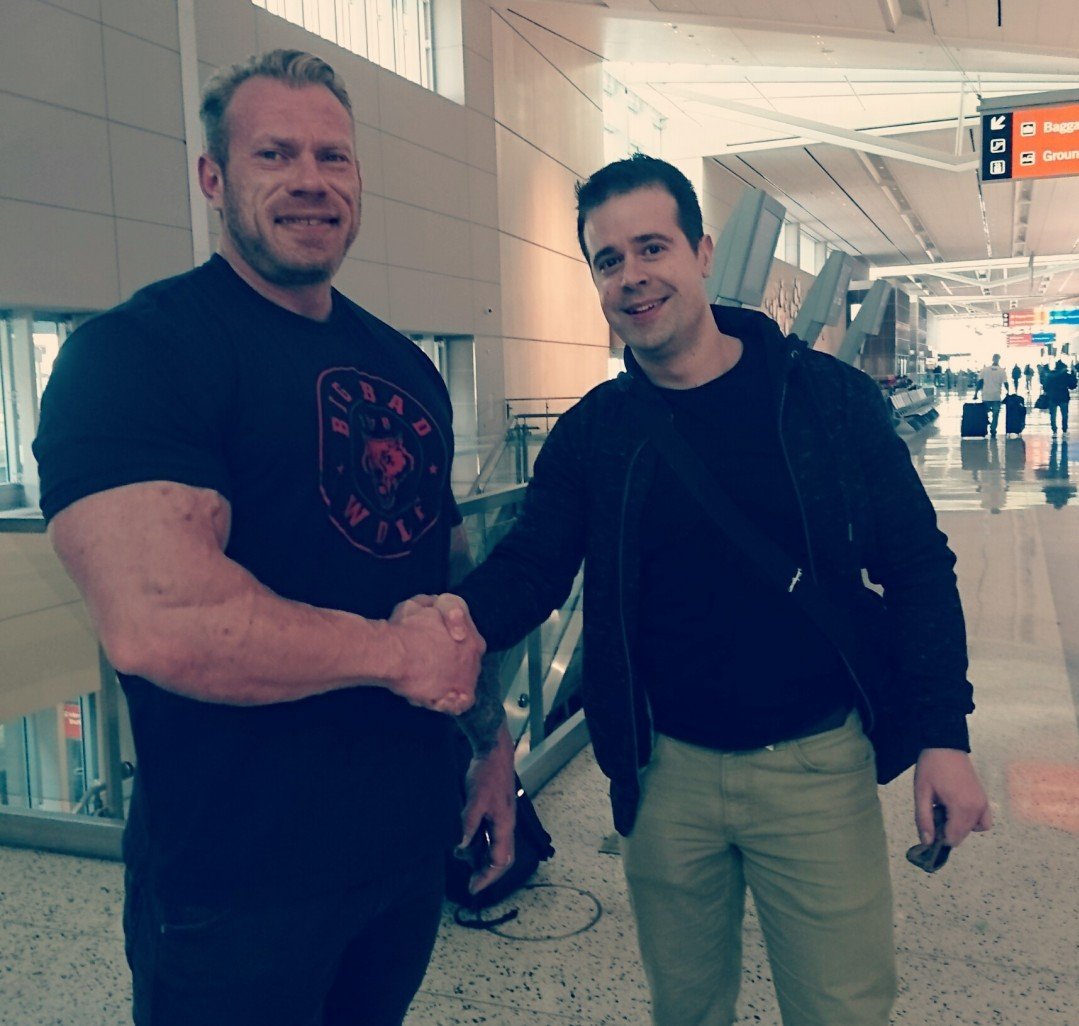 Our flight back is pretty smooth with a short layover in Frankfurt. Interestingly I’m not jetlagged at all by the 9hr time difference. Was harder for me to adjust to PST timezone. Usually it’s the other way around :) But granted, I tried not to sleep on the way back and 30 hours without sleep gets oneself really exhausted.

It’s not 3 days since my return back home and looking back, this was definitely one of the best weeks of my life. From start to finish, it was a series of memories for life. And I’m super excited about the future and all the new features WA will be rolling out in the months to come!

Write something…
Recent messages
littlemama Premium Plus
Amazing recap of your trip Ronnie! :)

Now how about that PPC training you were going to show us? LOL

Hahaa yes thanks for the reminder...I will work on it! ;) 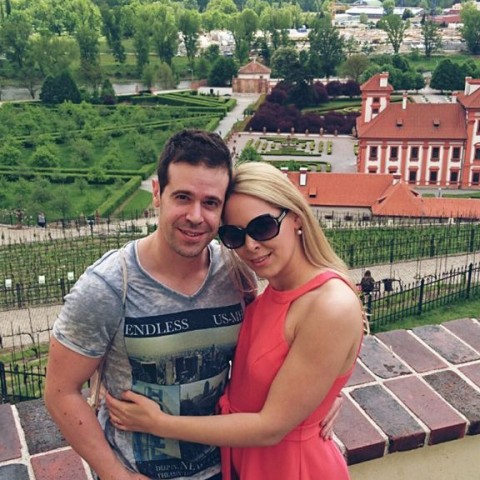