Serplify Review - Shamelessly Promoted by Those Who Don't Give a Damn About Quality Content or Your Website.

Just a heads up for all our legitimate Wealthy Affiliate members on a software being released tomorrow and being shamelessly promoted by people who don't care about you, your website, quality content, your readers and only care about lining their pockets by offering you bonuses "worth" $38,000. You can see them all over the first page of Google, here's a screenshot. 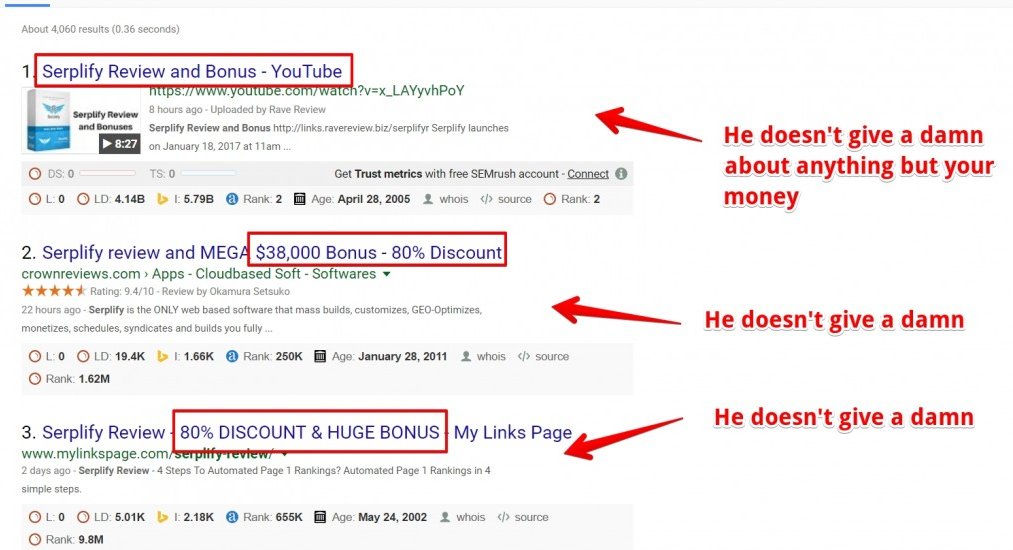 The thing is I've checked this out and it's a content spinner that spits out crap articles, clearly written by a non-sentient being who doesn't give a rat's ass about helping people to find solutions online.

In the video the guy shows it working and even shows the domain he's made some articles on, with Serplify.

I went to the website and looked at just 2 of the almost 1000 posts about gutter cleaners. They were not the shiniest, most useful articles ever.

The makers of this software have all kinds of bogus claims that you'll make thousands of dollars very quickly with Serplify. If that's true I will eat my hat. Problem is, I don't have a hat. But I will buy one and eat one if I have to...

Become a premium member at Wealthy Affiliate, learn the PROPER way to create a business online. Stop jumping in rabbit holes, chasing shiny objects that promise the world, in exchange for your hard-earned cash.

Keep it Honest and Keep it Real!

Keep it real, keep it legit, do it the honest, steady way and you will be successful with Wealthy Affiliate's training.

An afterthought or two...

1. If Serplify were sooooo gooooood, why would you flog it to anyone, and not use it to make millions of dollars yourself, in secret?

2. If they're offering bonuses supposedly worth $60,000 dollars, what does that tell you about the Serplify software itself? It tells me that it's crap and they know it's crap, that's why they (on front page of google) have to offer bonuses to tempt us in.

Don't fall for the crap, just because you see lots of positive reviews on page one of google it does not mean it's really a good piece of kit.

Stick with Wealthy Affiliate, don't try short cuts, create your content yourself, because your readers will appreciate it, you'll sleep better at night, your rankings will be good.

What do you think of Serplify and the likes of it?

Reply Like Like You like this
paulgoodwin Premium
I thank It is so sad that people actually get sucked up into this crap. WA has great people and some who have their own products and it is hard to get things mobile I know but you have to look at the long term result!

Reply Like Like You like this
Milfrogdred7 Premium
It's making me irate too! Here we are doing it honest,working hard, and these people do it dirty and are rich for life! They are everywhere! Take your money, run!
I understand completely. I haven't looked anywhere else since I came to Wealthy Affiliate. Never been happier. Thanks for the heads up.

Reply Like Like You like this
aikiman Premium
I am rather disappointed in this IM industry. More and more crappy product are coming out. More and more teachers and courses that are out there just to earn your money, because they know IMer have a weakness in "shiny object syndrome" of which I am one too. I have to stop myself too.

I think I have to unsubscribe to a lot of subscribed emails.

Well, there's only one thing to do. That's to be better than the scammers. This will lead to more success than the scammers can ever dream of if you stick at it through thick and thin and always do the legitimate things.

Reply Like Like You like this
PennMason Premium
@Jim-Bo
Ive been jumping in these rabbit holes to try and boost my content but your right. It grabs you and then your 47.00 in the rabbit hole! Im mad at myself for falling for their junk. Refund Requested. Lesson learned. And if not for the community I have here I would be on a long trail to no where land! Thank you JimBO! Quality is KING!