Operation Vegas 2021: Jan Update (Plus Updates on Other Sites)

Welcome to February! I hope all of you had great a great January. Time is flying by, as usual. I thought with the new year, I would switch things up a bit. I created a new banner and I'm also going to be including information from my other sites along with my WA site.

I'm doing that partially so you can see what's going on, and partially so I can keep track of things! :) Let's just get right into it!

I'm pretty happy with the way things went in January for my WA site. You'll see that my stats are getting better and better.

Here's what was accomplished:

There are two areas where I'm just not succeeding and it's getting on YouTube and mailing my email subscribers.

YouTube is tough because I just don't have a lot of time to shoot videos and edit them. But I know I need to figure it out because YouTube is so good.

I also want to learn about TikTok because I know Grace is having a lot of success with that. And honestly, it looks like a lot of fun.

For my email, I really want to revamp it. So I'm really thinking about exactly what I want to do.

I'm also considering expanding the content on my website into other lifestyle topics like weight loss and budgeting since my website name is just my name. I know it's risky and it could be a big mistake, but I also love to experiment and see how things work out.

We'll see! I'm not entirely sold on this idea yet.

Here are the traffic and stats January versus December.

As you can see, all my stats are moving in the right direction, so that's great! 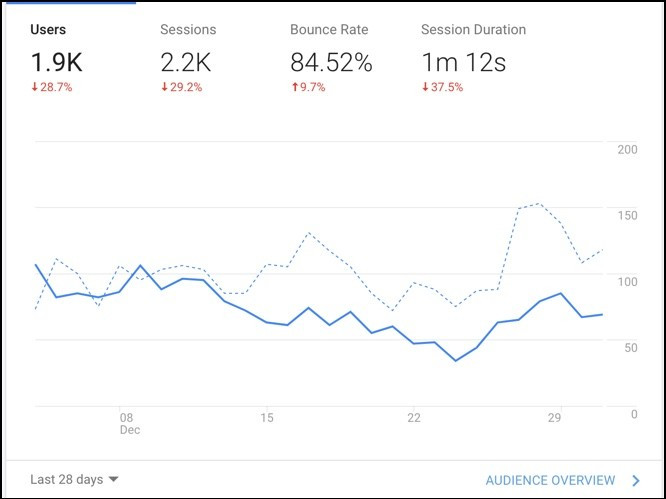 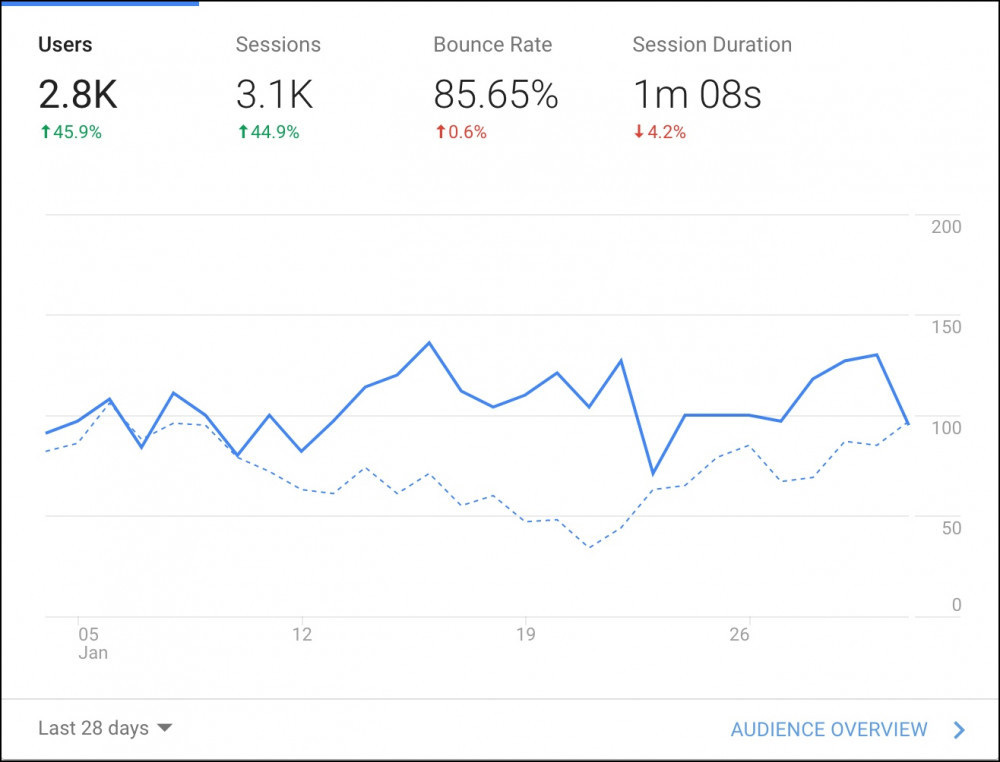 I still haven't hit 3k users in a month, but I expect to finally hit that this month. I'm getting close! 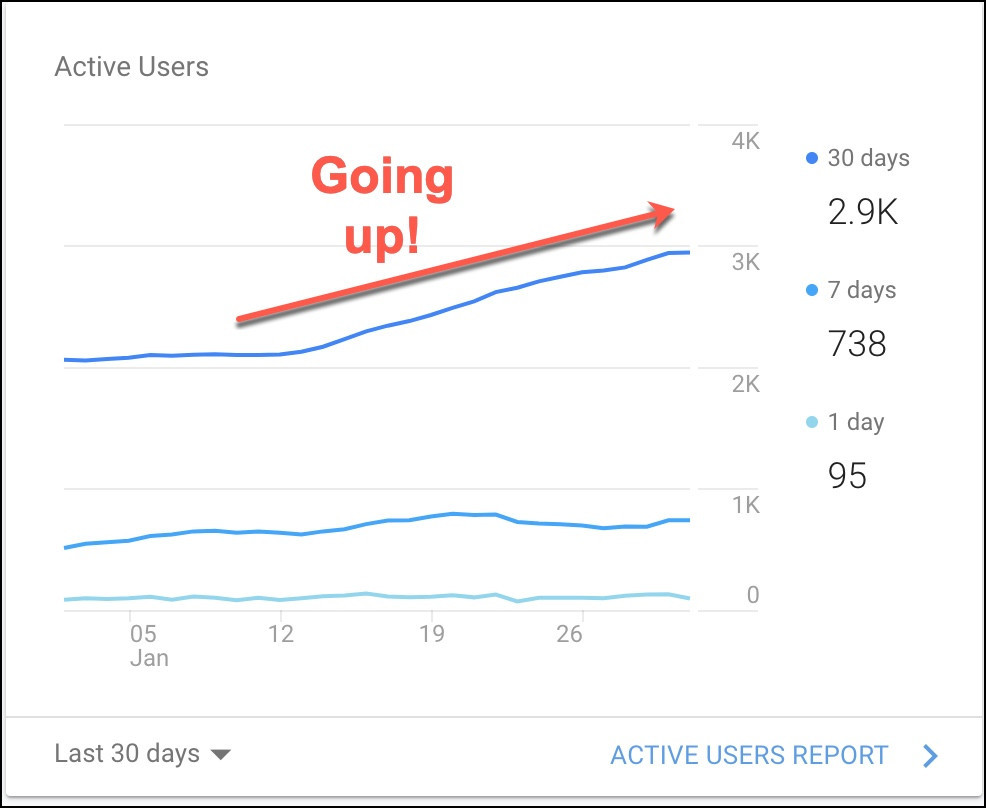 It looks better than last January! :)

I have 3 other niche sites, but I'm only working on one for now. Once I have a good amount of content on there, I'll let it simmer while I work on another site.

This is my PickPlants.com site. This is the one that I had up, took down and recently put back up again.

Here are the search console stats for January:

Even though this is a brand new site (kind of), I think I'm getting clicks already due to two things:

I wouldn't expect this to happen for a brand new site that's never existed before. 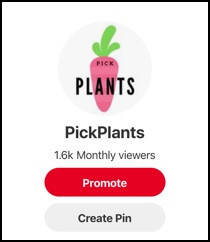 1.6k monthly viewers is not too bad considering I just started this account.

And you can see that I'm getting a few users over to my site from Pinterest:

The traffic is January is very up and down. I don't think that's too unexpected since I don't have much content on the site yet and it's still new. 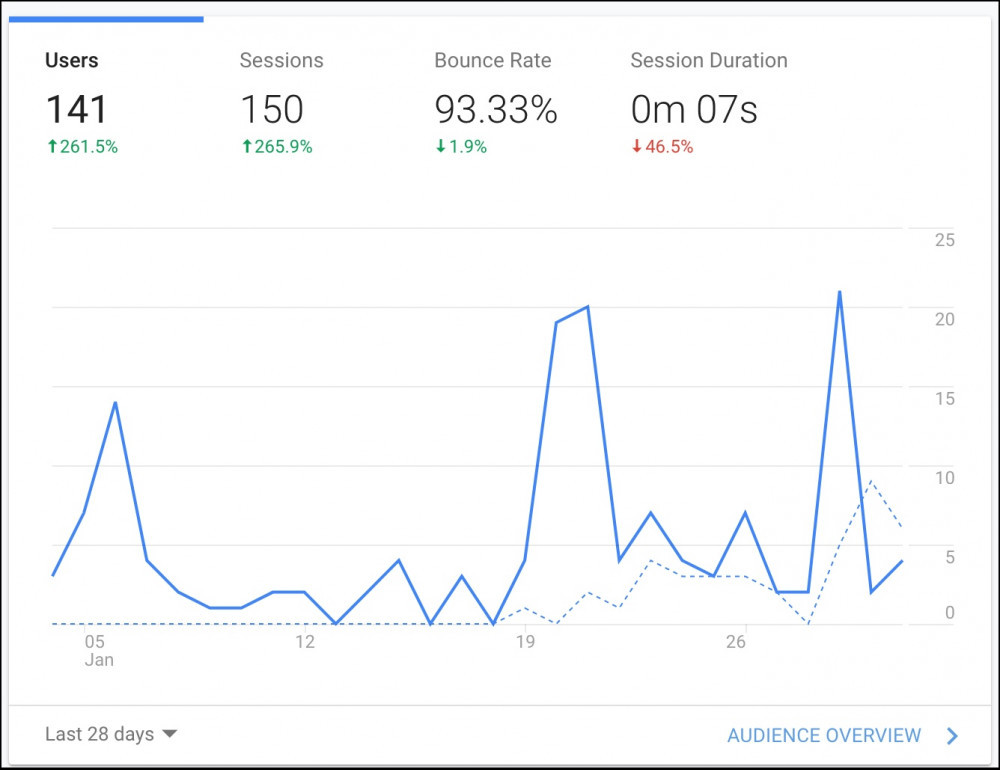 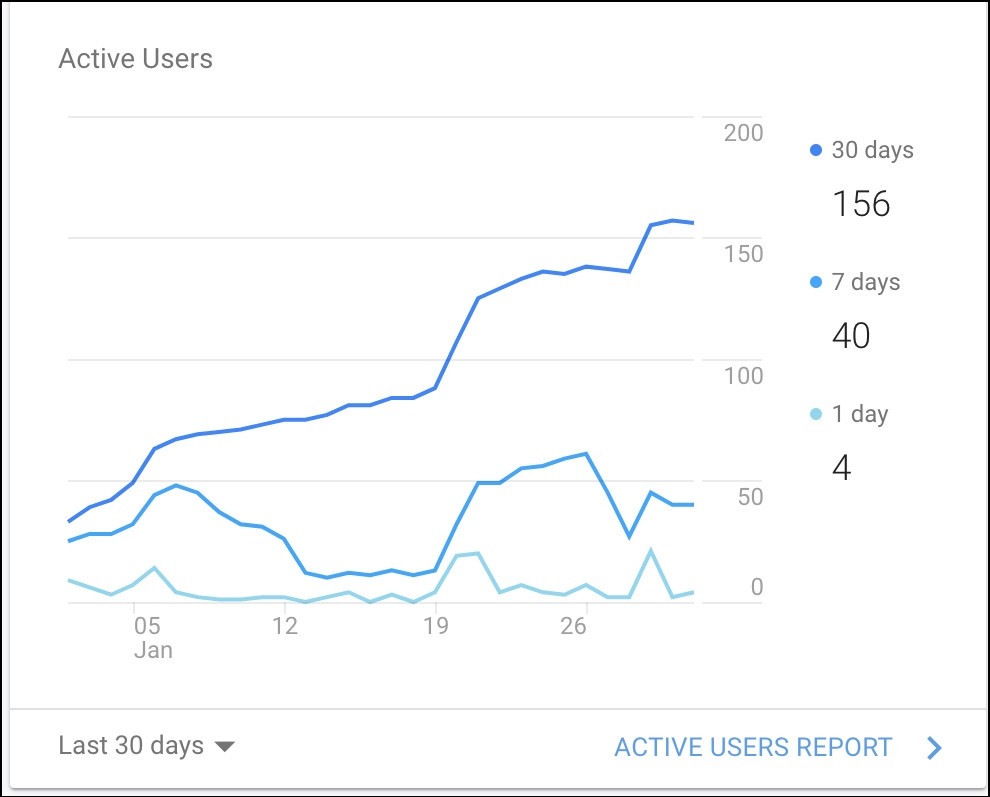 The first post I put on this site went up on 12/31/19. So, I'm actually pretty happy what's happening with this site in just a month.

I also was paid for a sale this morning ($15), but this one was one those sales that happened when the site was down.

I haven't been as active in WA, but I did post 2 trainings this month. They were on the same topic, but one was video training and the other was a text version.

You can check those out here if you have any interest in them:

Using this technique has been helpful for my PickPlants site!

Overall, I wrote 16 articles between the two sites. I'm really happy with that because, as I mentioned, I got a job outside the house working 7 hours a day.

But I've managed to still write, feed my family (haha), take care of my pets and do all the household stuff. I've also added consistent, daily exercise back into my schedule.

I thought having a job would slow me down, but I actually feel more focused.

Anyway, that's all I have for this month.

Thanks for stopping by and reading!

P.S. Tell me how your January went with your website(s). Leave a comment below to let us know if you had a good month, or a not-so-good month.

Write something…
Recent messages
TDenise Premium
I love this style of post Christina! It gives all the details. It looks like you’re bouncing back now and you sound much more encouraged.

I hope it continues to go up for you. It’s funny how less time can make more productivity, right? When you feel that sense of scarcity, you’re more disciplined about your time. I’ve noticed that too.

Reply Like Like You like this
cld111 Premium
@TDenise
Yes, I feel great about how things are going. I've also accepted the fact that I may not get to my goals the fastest way possible, but it's fine. I'll get there eventually. So I'm more relaxed about that.

Absolutely. Being busy means you have to treat your time way more carefully!

Reply Like Like You like this
TDenise Premium
@cld111
I think transitioning from being happy about the outcome to being happy thru the journey is key. I think you start noticing milestones more and shoot for more attainable goals. That’s a good shift and I hope that helps you get more success!

Reply Like Like You like this
SaraPoyner Premium
Wow, as usual a true inspiration. My website (which has been left to it's own devices for many months) got me 5 sales in January! Showing me this website has true potential as a 'best of' amazon site. I love your honesty and ambition. Sometimes it is so hard to juggle it all, a job, children, household chores. But like you say, often that makes us more focused and organised.

I am looking forward to building my passion project website, that will come with it's corresponding social media sites and in particular pinterest, so it was interesting to read about your successes.

I am also hoping to launch a youtube channel but worry I don't have the necessary equipment to film and edit? Do you use a certain editing program? Mind you my son could probably assist me there, he is a dab hand at thumbnails and intro's lol.

I guess I will have to endeavour on a whole new round of training in this area!

All the best with your mission and I look forward to continuing to follow your progress : )

Reply Like Like You like this
cld111 Premium
@SaraPoyner
Don't you love the fact that your site was left to its own devices and still made you sales? That's why this business model is so good!

I am just getting started on YouTube, so I am not an expert at all. So far I just use my phone and my computer to record. On my computer I use screencast-o-matic. I can edit in there.

When I recorded on my phone, I edited using iMovie. If you don't have a Mac, Windows may have something, but I'm not 100% sure.

That's definitely an area where I need more training too!

Reply Like Like You like this
SaraPoyner Premium
@cld111
I know! over the last 3 months of just leaving my site to it's own devices, I have had about 25 sales. Which just shows how amazing this model is. I should be looking forward to my first cheque from Amazon this month.

I was intending to use my phone to record for youtube, but was worried it might not be tech savvy or advanced enough. I guess it is good to start at humble beginnings and with a system I am familiar with, as I also have iMovie.

Reply Like Like You like this
cld111 Premium
@SaraPoyner
That's so great! I'm glad your site is just rocking and rolling without much work for you right now. I love that.

I think it's best to just get started on YouTube. You can always upgrade your devices as you get a bigger following.

Reply Like Like You like this
Defiant6 Premium
Thank you for sharing with us! You are definitely seeing results and with continued work and focus, they will only increase. I'm hard at work on my website where I get to promote Wealthy Affiliate. I've got about 40 posts on my site and working on getting to 100 this year. My goal is also to get at least 5 referrals to WA this year or into next year.

Reply Like Like You like this
cld111 Premium
@Defiant6
Those are awesome goals and I think you can definitely achieve that. Keep us posted on your progress!

Reply Like Like You like this
BobMargroff Premium
Hi Christina, It's funny you want to know about my progress...not a good month for me. January had a bunch of "things" getting in the way.

Next month will be better. I don't know how you do all you do. I had one week like that and it just about killed me. LOL!!

I guess us guys aren't up to the task that you moms can do. Cheers to you!

As always, I wish you the best!

Reply Like Like You like this
cld111 Premium
@BobMargroff
I'm sorry to hear your January wasn't the best. I understand how things can get in the way. Just keep moving forward the best you can.

To be fair, my kids are older (12 and 14), so they're pretty easy. And I get up early. I'm always up way earlier than everyone else so I can have quiet writing time.

Reply Like Like You like this
Palatia Premium Plus
Wow! You've been busy! Congrats on all your progress. January wasn't too bad. The sales are trickling in now. :)) On my main niche site, It's improving all the time. Still not enough sales to get paid yet but it will happen in time. I also just created a new MMO site and this one I'm excited about. The design is coming along nicely. I created one several months ago but the name and design just didn't speak to me so I haven't done anything more with it. This new one is my new baby so I hope it will be hopping before long. It's a lot easier to write content for MMO than my niche site. lol.

Reply Like Like You like this
cld111 Premium
@Palatia
That sounds great, Paula! I'm glad you're getting sales and it sounds like your new site will be fun and exciting to work on. Love it!