I live on a boat and mostly run my business from wherever the boat is. We are currently making a slow passage up the east coast of Australia.

An important stop for me on this journey was always going to be the Whitsunday Islands. They are the premier sail and dive grounds of eastern Australia and the jump off point to the spectacular Great Barrier Reef.

We arrived in a blow.

A big blow. Winds were reaching 25 knots as we dropped anchor in the south corner of Whitehaven Beach. By lunch the wind was 30 knots, by dinner it was 40. Unsafe to leave, uncomfortable to stay. We had no choice but to sit it out.

The waves were dumping violently on the ‘whitest sand in the world’. But that wasn’t so bad.

And it wasn’t the heaving swell that rolled in from the whipped up Coral Sea that was the worst.

Nor was it the dragging anchor ...or the sudden jolt that threw me off balance each time we snatched back on the chain in a powerful gust.

It wasn’t that we sustained any damage or lost anything to the wind...like the poor guy behind us whose beautiful fishing boat, loaded with rods and tackle, escaped from its mooring some time after sunset and disappeared into the windswept night.

Our fresh supplies were quickly diminishing and we are in a ‘Green Zone’ where it’s illegal to fish! We haven’t been on the mainland since the Tropic of Capricorn. Heck, we can live on beans for a while, it’s not so bad. But my husband is nearly out of tobacco (Yikes!) and the dog food is down to five last rations.

The worst thing could have been..

The diabolical weather forecast of four more days of this same old pounding, blowing and rolling. Zarzoff wind speeds and a 3 to 4 metre swell outside!

The absolute worst thing that could happen - did.

No phone, no TV (not that I care). Inforced media starvation! Sensory deprivation of a digital nomad! Lifeblood of the internet marketer! Gone.

Yes, you’ve heard me sob on about this problem before. But this time I have a Lemons to Lemonade story for you.

The benefits of an occasional media fast.

It’s hard for me to believe that as a result of The Cut Off, this has been my most productive week ever, in the history of my time at Wealthy Affiliate. True.

What one free tool that saved my soggy, shaggy sanity?

Google Docs Offline. That’s why I’m telling you this long winded story…(and because I have the time!).

Here’s what I achieved when the worst that could happen, did.

As it is too rough to swim and too wet to do laundry (yey!) I found other ways to pass the time. I made fresh yoghurt for my husband’s birthday. We put down another keg of Mexican Cerveza.

I took up the pleasure of counting giant sea turtles surfacing to breath, 18. I gave myself a manicure and pedicure and we caught up on a lot of lost sleep because the nights are rough and damp.

I also reread parts of my all time favorite book ‘The 4 Hour Workweek’ by Tim Ferriss. If ever you get the chance, check it out.

I’m up to the chapter about taking the occasional media fast and letting the bad things happen!.

Such is the life of an internet marketer.

Reply Like Like You like this
whitsunday Premium
@TommyK
I try to do that all the time. I succeed about 80% and then have a slump. You won't hear from me during a slump. Go well.
J

Reply Like Like You like this
JamesBB Premium
Hi Janelle, from one yachtie to another ... I feel the pain... but what a lovely pain it is ! I miss my yacht so much and have been a landlubber for way too long. I get back to the Whitsundays every now and then to hire a cat for a week or so. Love it there. My dream is to sail my own (next) yacht there and hang out for as long as it takes. I had the same internet blackout issues in Japan recently - very frustrating. If only I had been quite as productive as you !
Tight sheets...
James

Reply Like Like You like this
whitsunday Premium
@JamesBB
Ahoy James. Well I finally got reception and sunshine at Blue Pearl on Hayman. Magic.
I had a snorkel for you this morning but the storm has upset the visibility. Each day it improves and I'm here for about 4 more days.
Thanks for reading and commenting. J

Reply Like Like You like this
jrmcd1 Premium
Wow, all of this from one internet blackout, well done and nice tutorial, will be very helpful for everybody.
How to not look retarded on camera, (look alright to me in your photo with dog) if an issue don't show you face just give narration.
In Australia myself, Melbourne, bit colder here than where you are.
Have a good journey.
John

Reply Like Like You like this
whitsunday Premium
@jrmcd1
Hi John. I guess it takes a while to get used to seeing and hearing yourself on camera. I think I will take your advice and talk in the background.
Go well from Janelle. 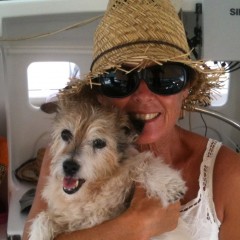