Scammers offered me $5,000 to remove two of my posts

Yesterday I read that Grace (@littlemama) had received a message from some scammers who claimed they would pay her $5,000 if she removed two of her posts where she exposes them.

I didn't check my inbox yesterday but I just checked it out and I see they have also sent me this message. 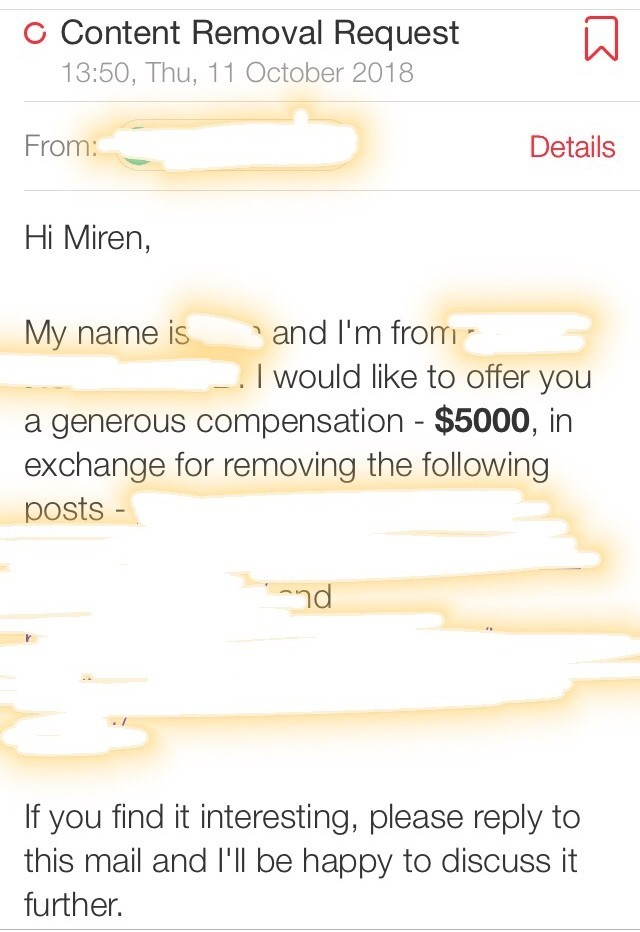 I haven't replied the email and I don't think it would be a good idea to get in touch with these people.

Honestly, I don't believe they would pay $5000 to take down my reviews. They could tell me to remove them and once it's done, they wouldn't send me anything. Or perhaps they would ask me for my information and sell it to other scammers.

I really don't expect anything good from them. They just want to "delete" anything or anyone that gets on their way.

I‘m earning way less than $1000 a month from my site and things are getting harder than before so it’s easy for me to get frustrated and lose hope after all the work I’ve done. So should I accept their offer? I will not accept it because I would lose traffic and I would feel very upset knowing that these scammers would take advantage of more innocent people...

Money is not everything even though it’s necessary to make some dreams come true. And it’s really dangerous when people who don’t have good intentions (like scammers) take it from people who need it the most, so if I can prevent this from happening I will continue to do what I have been doing until I’m allowed.

Anyway, I thought I would leave this here so that you can see how these scam artists operate and know what to do if they try to bribe you.

I hope you have a great day, take care =)

Thank you for the info, though.

Reply Like Like You like this
BDuncan1011 Premium
I can certain understand any site that if getting negative reviews to want to have them taken down in some way. You are right, though, to have no contact with them; for several reasons.
1. The public needs to know when they are getting scammed.
2. You have a business to run and reviewing sites is part of that business. Taking down a post just because someone doesn't like it is like asking a restaurant to close its doors because their food is better than yours. IF they don't like the reviews, maybe they should do something to up their game and maybe start treating people right.

I applaud you for sticking to your morals and keeping yourself safe. As always, you are an inspiration to me and I'm proud to be part of your team. Thank you for setting the bar.

Reply Like Like You like this
Miren Premium
@BDuncan1011
I completely agree with you, Brent. You made a good point! What they are doing is similar as telling me to sell my work so that they can benefit from me not doing nothing.

Thank you so much for your supportive words, it means a lot =))

Reply Like Like You like this
davehayes Premium
Miren, well done to you, it just goes to show how poor THEY know their stuff is to be able to offer the 'payment' which in truth I doubt they have

I have to add this to you, only because its the way I have dealt with similar in the past, which is to say by way of return

I'm really sorry you don't like the article and /or find it offensive, perhaps you would like to send through a corrected version of what you see as wrong so as you can be seen to transparent

I have yet to receive an offer of this type back

But again well done you : )

I have asked them why they want me to remove the articles and what's wrong, just to see if they can recognize they don't find them convenient.