The Sisyphusian soliloquy - The Bungee effect

I want to bring to the table a new concept. I have thought about this for many years. I don't know if I necessarily have the answer but I would love a discussion.

This runs on from yesterdays blog on "paradigm shifting and paralysis" not by design but it must be my thought flow this week. I have a term for what we do, what we do when we are alone, when we are frustrated and down but we know better and it perplexes me.

King Sisyphus was a mean old king who is thought to be the founder of Corinth - Greece, through his many actions and diatribes he was banished to the underworld only to be given the task of rolling a large rock up a hill, only for it to roll down again and this he was to do for eternity. 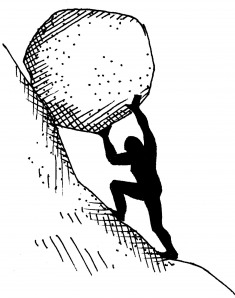 Do you ever feel like this, I know I do, often!

In experiments that test how workers respond when the meaning of their task is diminished, the test condition is referred to as the Sisyphusian condition. 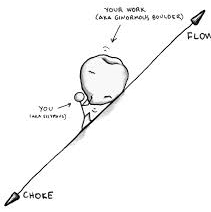 The two main conclusions of the experiment are that people work harder when their work seems more meaningful, and that people underestimate the relationship between meaning and motivation. So this then leads me to the thought, " Is my work here at WA, this quest for knowledge, meaningful? I think for me it is but then the boulder tends to run down the hill. The definition of insanity is 'doing the same thing over and over again expecting a different result'

So onto Soliloquy, We often in times of darkness or times of frustration speak to ourselves, "come on Mike, get with it, what the hell are you doing man, you know better than this" We speak outwardly from within, we speak to an unlistening crowd while hoping those close to us cannot hear. Much like the actor in Shakespeare up on stage, off to one side, as in Macbeth - "is this a dagger I see before me?" he speaks out to the audience quietly, while the players on stage hear not a word. 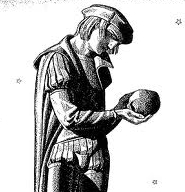 We speak to be heard, sometimes just by us but we are speaking, this mind of ours, this goal striving servo mechanism I have spoken of before in my POWER course, trying to focus on what we want but that Sisyphusian component of our being takes over and the rock rolls down.

So it leads onto then my concept of a bungee effect going in withing ourselves. We know what to do, we know what to eat, we know what our goals are, but 'why Oh why', he cries out, can't we achieve that which we know is good for us.

Studies have shown that only 20% of us set goals to be successful, fit, solvent, whatever you like and of those 20%, 70% fail, WHY?

Author, Douglas Vermeeren states in his book, "Amazing success" that we fail for ten reasons. I am not going through his reasons here but I do recommend you visit his site

I think the Bungee effect is a conditioning, its a set of beliefs that we hold that stop us from moving on. Yesterdays blog we spoke of Paradigm paralysis and Vermeeren talks about analysis paralysis. We are inherently scared of change and we will not 'allow' ourselves to change from that job, get up from that desk, take that course because we are afraid. Well you know what, people are doing it everyday while you sleep, while you watch your soaps, while you are on facebook and they are getting ahead. Its not luck or a silver spoon, it is that they did it and you didn't.

We know better and we want better, i know we do because we are in here and you are reading this but beware the bungee effect, beware that Sisyphusian soliloquy of speaking into the darkness, speaking out so loud, where no one can hear you.

Write something…
Recent messages
coolcity Premium
I don't know, I think we tend to over-analyse things sometimes and get too wrapped up in the whys and the wherefores of what we are doing and what we should be doing.

But I also worry about doing the wrong thing, for example do I spend my last bit of spare cash on WA membership or hang onto it in case another unexpected bill arrives? The trouble is this indecision leads to failure, you're not sure that you are doing the right thing so you don't fully commit to it - that's my theory anyway.

But a lot of it depends on the circumstances around you. My wife, for example, wouldn't even know how to turn the laptop on and isn't interested at all. If she were an IT or marketing expert however my outlook would probably be different because she would be my guide, my confidence. This is why there is a lot to be said for successful people surrounding themselves with the right people.

This time it's different. It FEELS different because we ARE amongst people who have done exactly what we are trying to do, using the tools and expertise available here and I think WA is the key to success. Because we now have the tools to do what we want to do it inspires confidence because rather than hoping it will work, it now feels as though it will work and we have the backing to work out where we are going wrong if it doesn't quite go to plan.

I believe this is half the problem with not quite getting where we want to be, not having the confidence to believe a new venture will work. This time I believe it will work, more than I have ever believed before. No over-analysing necessary.

Reply Like Like You like this
MikeyB Premium
phew coolcity, yes I agree with you. I definitely think that an introverted nature tends to make us cautious and maybe then we dont keep pushing that rock but we walk away, I have done that before. I am at that point this month of no money for the WA membership and wife is mad as we need to pay bills so do I pay again or pay the bills. Its always such a tough choice when there is no income attached to this work. Tough choice.

Reply Like Like You like this
coolcity Premium
Yes it's not easy, but I personally think it's worth raising the money somehow if possible, even if it means selling a few bits and pieces on ebay or amazon. In the long term I know it will be worth it but it is a lot of pressure.

Reply Like Like You like this
Paul Dean Premium
Fear is a great demotivator, as is repeated failure. When I was a lad, I had to go on stage to collect my "O" level certificates. So fearful was I of public exposure I nearly fainted, aged 16. Now I run one-man seminars lasting as long as eight hours to groups as big as 350 people at a time. That was a huge thing to get over.

Now my big fear is doing the wrong thing. Yet I see successful people doing the wrong thing time after time and making money. So this place is bringing me out of myself and challenging my preconceptions. On that basis I will succeed, but every step is a step into darkness for me, undertaken in faith.

Reply Like Like You like this
MikeyB Premium
wow Paul, really, nice story and now you up on stage...good job, was always my dream to take what i write to groups....

Reply Like Like You like this
choppydo Premium
I totally agree! You can`t succeed until you let go of your doubts and self imposed limitations to give this your all. Until then, you`re just pretending. I believe that something will become of my hard work because I trust the teachings I get here. 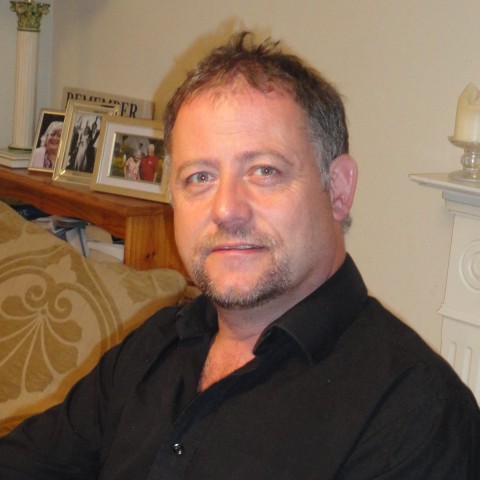