How 54 Leeches Saved my Finger and the Lessons I've Learned

A few weeks ago, I sat down on a folding chair to have dinner with friends at home. It was a chair I had sat on countless times before. But this night was not about to be like any other.

Without warning, the chair collapsed beneath me, trapping my hand in the folding mechanism, partially amputating my right ring finger. There was lots of blood and it wasn’t pretty which together with the shock, is probably why I passed out. Truth be told I used to be squeamish about a lot of things which after this experience I no longer am.

The attending surgeon at the Sydney Eye and Hand hospital confirmed I needed immediate emergency surgery. He had no idea if he could save the finger because of the extent of the trauma. If they could ‘put it all together’ again they would, otherwise I would have to lose part of my finger.

Thankfully they decided to take a chance and save it, even though they believed there was only a 50-50 chance it would make it. At the same time they discovered I had also fractured three fingers, one of which was the cut finger. 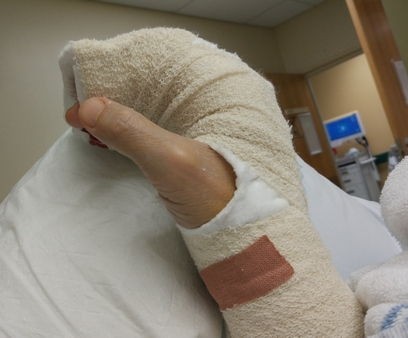 The 48 hours post-surgery was critical. They had no idea whether the badly damaged veins in my finger would be able to repair enough to do the job required. There was also the possibility of infection, rejection and blood clots. The waiting was tough and stressful but I’m inherently optimistic, always choosing to believe in the best outcome possible.

Then came the bad news.

The blood was getting to the tip of the finger, but it was not draining away well enough. Unless they could relieve the finger of excess blood, it would not survive.

That’s when the medical team approached me about leech therapy. As if the whole experience hadn’t been surreal enough, now they wanted to attach blood-hungry leeches to my finger?

Yes! I had heard right.

Leeches, if you don't know, are blood sucking parasites that look like worms, found all over the world. The ones they would use are bred specifically for medical purposes. They would help drain the blood away, and give the veins in my finger a chance to get stronger to do the job on their own.

I have to admit, the idea did not fill me with glee, mostly because I was being challenged to move out of my comfort zone, in a way that was very unexpected.

Left alone to consider my options and make a decision, I knew I had to focus as clearly as I could on what I needed to do.

That's when I remembered something I'd read in a book not long ago. The idea is that you ask and answer the following focusing question to help you know the ONE THING you need to do next.

In an instant, I had my answer. Of course, I would opt for the leech therapy. It was the one thing I could do, to make the job of circulating blood in my finger easier, and should it work, make amputating my finger unnecessary. 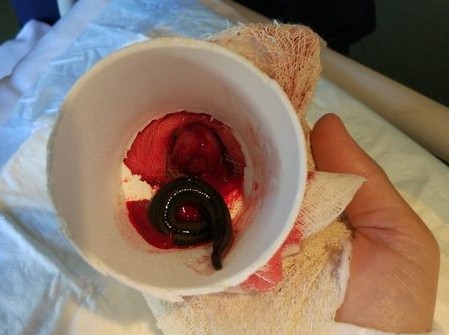 Over the next eight days and nights my finger hosted 54 leeches in total. Some only fed for an hour before dropping off, others hung on for as long as four hours!

First, they were attached continuously, but towards the end, the time between attachments was lengthened to give my repairing veins a chance to step in and do the work on their own.

Some leeches were like disobedient kids, simply refusing to feed, while others did so eagerly, increasing to quite staggering sizes. 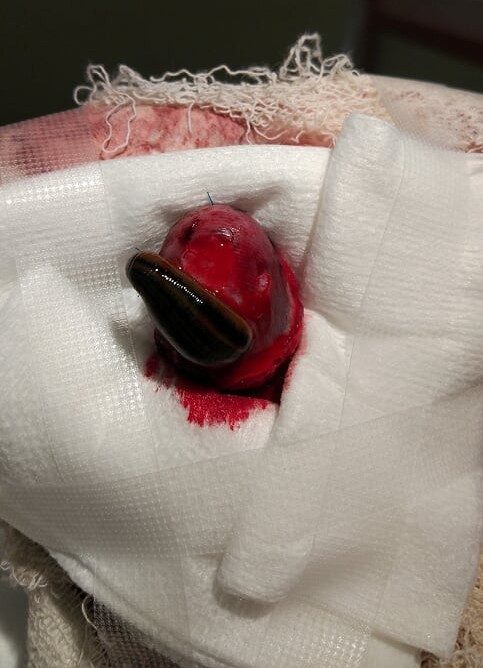 Nine days later I was discharged from hospital. The leeches had saved my finger!

I wouldn't be completely 'out of the woods' for another ten days at least, which meant I'd have to report daily for examinations, dressing changes and so on. I was just ecstatic to be leaving with all ten fingers. 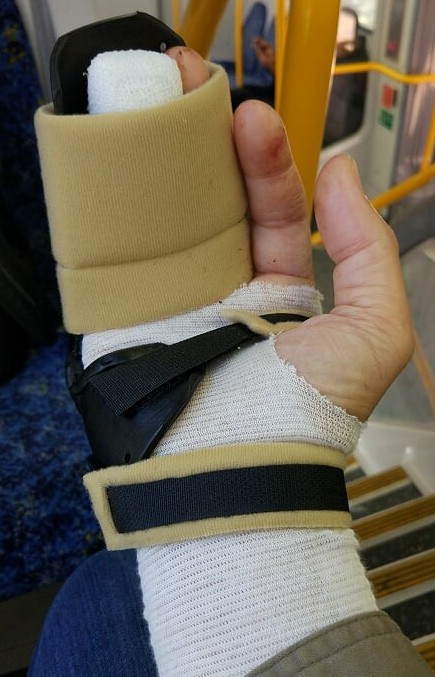 It's been a month to the day, since the incident happened and I'm pleased to report that everything is still good and the finger is on track towards making a full recovery.

The healing process is not something that can be rushed and there's no knowing exactly when I'll be able to use my hand and finger as I remember, but that's fine, I'm on my way.

Who would've thought that a traumatic injury to one of the smallest parts of my body would impact so majorly on my life, but it has. Nothing is the same as it was before.

Of course, I've had plenty of time to reflect and lessons to learn:

So as a result of the experience I've had, what's the one thing I can do, such that by doing it everything else will be easier or unnecessary?

You may be thinking, that my one thing would be to never sit on a folding chair ever again. Well I did throw all the remaining chairs into the trash but that was simply a reactive move and not my one thing. :)

No, the one thing I can do is accept that I'll never get rid of life's "folding chairs". There will always be another. We need them, to help us grow. In fact, they'll especially come your way when you take on a new venture, like an online business.

When you accept these as part and parcel of the journey,it's easier to embrace them and learn from them. And that makes behaving in any other way, unnecessary.

Lastly, thank you to those of you who have sent me messages, wondering what had happened to me. Now you know. I very much appreciate your concern and follow up.

So I'm back, still journeying although doing things very differently. From now on I'll be focusing on what's most important only and I'll be expecting results that are nothing short of extraordinary.

As we move into the second half of 2018, may you also achieve the one thing that's most important to you.

Write something…
Recent messages
BetterDays2C Premium
WOW! Mark! That is some story! I am glad you learned from it and it has helped slow you down and changed your life. I can totally relate. I was diagnosed with a rare form of breast cancer over 3 years ago, and I experienced a lot of the same things you experienced. I was way too stressed and constantly in turmoil. All of that came to a screeching halt! Incidents like this do change us, our lives, our perspective and hopefully we learn from them.

It sounds like you have had a lot of time to reflect. I am glad your finger was saved and you will succeed at this! Look what you have been through! Take Care.

Thank you so much for reading my story and leaving a comment. I have no doubt that what you experienced with your diagnosis was totally life-changing. Something like that definitely jolts things into perspective instantly.

So wonderful to hear that you are a survivor and going from strength to strength! These experiences come to help us even though at first it may not seem that way.

Thank you so much for your inspirational comment Connie. :)

Reply Like Like You like this
Justin4487 Premium
i wish this idea was brought up when my dads hand got sucked into a hydraulic wheel press they amputated 2 fingers and repair the other 3 and the hand. glad it worked out for you mark

Reply Like Like You like this
MarkBa Premium
@Justin4487
Hey Justin, Wow that sounds like it would've been an extremely painful and traumatic experience for your dad. I'm sure it was a life altering experience for him and hearing about it only makes me even more thankful. Thank you for sharing that.

Reply Like Like You like this
Justin4487 Premium
@MarkBa
yea the damage done basically made him lose all function in that hand. its still alive like feeling wise but he can't move it and its been this way a lil over a year.

Reply Like Like You like this
fleurallen Premium
Woah... leeches sounds like from the dark ages but glad it saved your finger Mark. I had no idea life had turned to such dramatic events when you're quiet round the WA community. Delighted to hear your upbeat, positive mindset has not been shaken. Welcome back!

Reply Like Like You like this
MarkBa Premium
@fleurallen
Thank you Fleur! It's great to be back, a bit slower when it comes to typing, but definitely not beat. :)

Reply Like Like You like this
Bald Eagle Premium Plus
WOW - sorry to hear but you seem to have "handled" this magnificently.
Breeding Leeches could be your next niche ...

Reply Like Like You like this
MarkBa Premium
@Bald Eagle
Ha ha, thank you Lawrence. You know, you're not the first one who has suggested that as a niche. :)

Reply Like Like You like this
Annebulm Premium
Hi guys
I’m new to WA. Still in training. I have not yet set up business how will this work?

Reply Like Like You like this
Justin4487 Premium
@Annebulm
follow the steps in training, as long as you are dedicated you will be successful. these businesses work with affiliate marketing basically you advertise major companies products and are paid commissions when people buy from your site.

hope this helps and motivates you 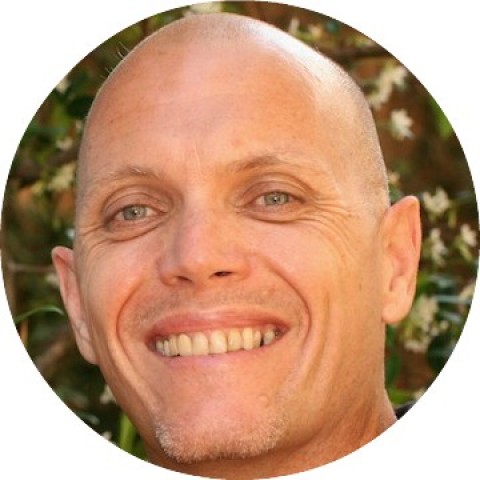