Disapproved Because of the Word God

Forgive me for giving a rant today.

The comment request required that I ask a question, so I responded with asking a question. The only mistake I made is that I didn't anticipate he or she doesn't want the word God to be included in the comment. 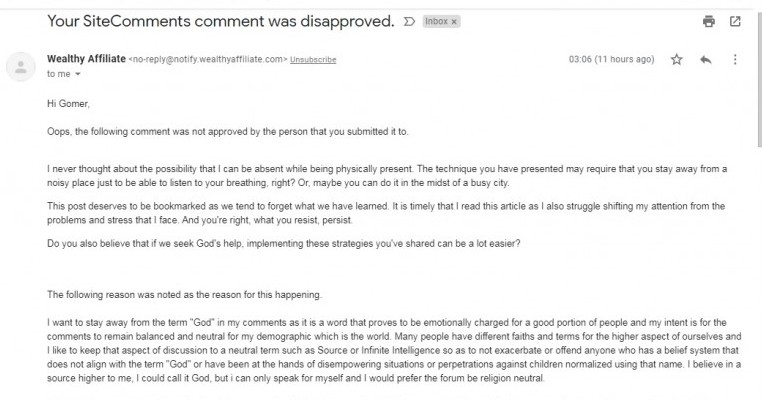 We can argue that this is outrageous and not justice at all.

But since it is the blogger's prerogative to approve or disapprove according to his or her taste, then what we can only do is pray that our comment will land on a person's taste.

But he could have just answered my question. The person requested that I ask a question, I just followed the request.

Is it wrong to ask this kind of question?

It could have been dismissed with a simple reply.

How could someone predict he or she doesn't like to see the word God?

I didn't even see a sign in the blog post that he or she is an atheist!

Again, the comment request required that I ask a question, so I did. What's wrong with that?

It might have been better if he or she just responded to my question, right?

There are a lot of comments given to my blog posts that I was supposed to disapprove but thinking of the welfare of the commenter, I approved them instead by just editing some portions of the comment that I didn't like.

Can you guys be more considerate or compassionate with your fellow WA members?

Just like I did? I lowered my standard in approving comments as I can edit some parts which I do not like. I only disapprove comments that are blatant disrespect to me.

(I encountered one guy who looked like he's just playing around, so I disapproved)

Think of your fellow's comment approval rating, how the fellow member might be affected by your being inconsiderate.

But whatever your view on this, I don't care NOW.

I in fact feel proud that I mentioned the word God.

Write something…
Recent messages
MarionBlack Premium
May I suggest that in future you avoid religion and politics in your comments. And try to not be too controversial.

Reply Like Like You like this
GomMagtibay Premium
@MarionBlack
That's what I forgot. I got entered into that territory as the subject veered near that. The subject of the post was about an emotional problem which usually is related to a person's spiritual well-being.

Thanks for the reminder. I didn't expect that will happen.

Reply Like Like You like this
jennyjewel Premium
I find the comment process a little confusing! The internet is a world wide platform with billions of people, from all different walks of life, including culture, race, religion, gender and belief. If you create a website and present it to all of these people, you are going to get comments that differ in their opinions. I believe that is the purpose of having a comments section, to open up discussion, get feedback and possibly learn something from what other people have to say. I would not disapprove any comment given on my website, unless it was abusive, I respect what anyone has to say even if it is not my personal opinion. Just my 2 cents worth and not meant to offend anyone.

Sorry that happened to you Gomer:)

Reply Like Like You like this
DaveSw Premium
I have seen some comments disapproved for silly reasons, but this one perhaps is right up there with the silliest. It takes a minute to remove the reference if the requestor does not want to have that word on their blog. Common sense just does not prevail with some...

Thanks for the tip in your comment below too, I have a list of websites/owners that I will not comment on any of their posts for the same sort of reason...Just too much insensibility with some and no reason to waste my precious and valuable time commenting...

Cheers and thanks for the heads up...

Reply Like Like You like this
BlSt Premium
Don't panic but here is a word of consolation which is true: it is better for your comment to be disapproved right now because of the word "God" than for you to be disapproved by God Himself. Just take note of that website and avoid it as much as you can next time.

Reply Like Like You like this
GomMagtibay Premium
@BlSt
For the sake of others who don't know this yet, there's a way we can skip a site without hitting the SKIP button. Just navigate away towards the dashboard. That's what I'll do next time around.