Would you let him die?

So, what would you do in this case? Go on with your "business as usual" and ignore it? Or would you do something to save his life?

Whose life? - Maybe this is the question. 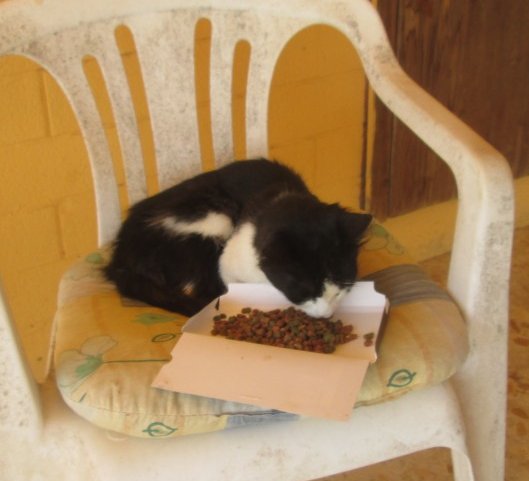 Yesterday a new cat sat on the covered terrace and didn't flee when we ran past it to save the washing from the beginning rain. Strange. Normally foreign cats run away. Later I went near, it was not afraid, I even could touch it. It - he- didn't look well, some stuff running out of his mouth and he only sniffed at the food, interested, but didn't want to eat.

I told him if he was there, still, this morning, I would bring him to the vet. He stood up and left, slowly.

Believe it or not:

This morning he was there and didn't resist when I put him into the transport box. The vet diagnosed a severe inflammation in his mouth, he suffered pain and needed to undergo surgery for the necrotic gums. Otherwise he would starve to death.

What would you do? Would you let him die? Or pay the vet for surgery and care and afterwards have one cat more in your pet family? 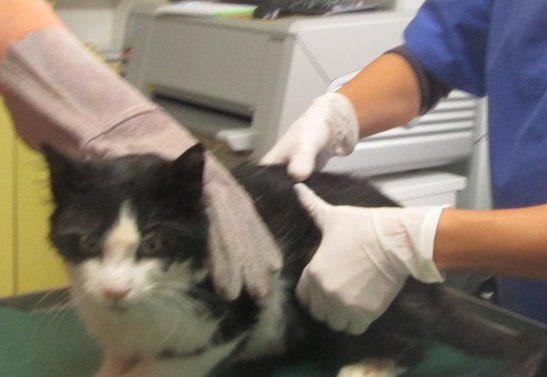 I guess you know what I did. When I get him back from the vet in a few days, then the process of re-structuring the pet family will begin. It is an amazing process to watch, but not easy for the cats and dogs, And not easy for us, too who need to protect all of them and not allow newcomers to take over the reign. It takes time - which will not directly contribute to whatever we believe is SUCCESS.......

But SURVIVAL is success, isn't it?

PS: How can I resize the pics when uploading?

Write something…
Recent messages
Heidi56 Premium
A short update on the black&white cat. The vet has taken out 5 teeth, she gave him medication for fleas and worms as he was really bad off in that regard and he should be fine - with tons of antibiotics. She is a little preoccupied as the inflammation seems to have entered the bones of the jaw which can be difficult to heal.
He got liquified food - and he ate a whole bag, hungry as he was.

So now you can pray for a good recovery!
Thank you
Heidi

Reply Like Like You like this
Heidi56 Premium
@feigner
I will update you next Tuesday when I go to get him. We are going to see some places south of Naples this weekend and so I didn't want to get him home and then leave him alone here with the other cats. The integration needs time and some help from us, I think.

Thank you, Phil and Gerlinde for your being with me and this creature who has now the chance to LIVE.

Reply Like Like You like this
DavidLYancy Premium
Hey, I've had cats, I know what you mean when have to do with your best friend living or dyeing. Sometimes it's no choice, and it's time to let our "MOST-HIGH" handle it, like we we're to in the beginning. I had to let go because I found at a young age of 6 I had a severe allergic reaction from me being around them. Now I've grown older that allergy is like 75% cured, letting me have a few of my own, still they went on with different master as they grew, wow how I would like to tell you about how they the three came about, but I really can't stand to type at this moment, but we'll speak or text soon,"YEH!" HOLA!

Reply Like Like You like this
Mdh46 Premium
I would have done anything I could to help him too. I am so glad you were there to help him. Also I know you will give him a good home. We are so blessed that we were given animals to love and to cherish just like family. Thank you so much for getting that precious cat help. Have a great week.

Reply Like Like You like this
Heidi56 Premium
@Mdh46
Thanks for your kind words. This cat probably will be part of the "inner" family. Every now and then we notice other stray cats hanging around and eating from our outside feeding place. I actually hope that they stay healthy!!!!

Reply Like Like You like this
LowellAnn Premium Plus
I once took in a stray that was starving. HardLuck was the family pet for roughly 20 years. I had no idea cats could live that long. Eventually she had lost all her teeth and ability to control her body functions so we finally had to put her down. We all do what we can for animals but there does come a time when we can no longer deal with the reality.

Reply Like Like You like this
Heidi56 Premium
@LowellAnn
Yes, LowellAnn,they can live long when they are save. "Outside" cats normally don't make it so long. The oldest one I had was 17 and I also had to put her down when her cancer opened on her side and life wasn't good any more. I still have to write about her. So many cat stories I could tell - and will tell. Creating the cat website is really fun and joy to talk about these beautiful creatures!

Reply Like Like You like this
feigner Premium
i think they know where to go to get help heidi - and you just can't help it, we would do the same. and the family grows along with the food bills - you will need to work a bit harder now! lol

good luck with the cat, i hope it all works out
phil

Reply Like Like You like this
Heidi56 Premium
@feigner
Thanks Phil for your kind words. We already feed several strays, because even when our cats sleep inside, the outside food bowls are normally empty.....
Do you mean "home", where? I saw with the upload window that there is a width choice, but when I chose the area for cropping the picture, it was always at max although I hadn't even taken half of the whole photo 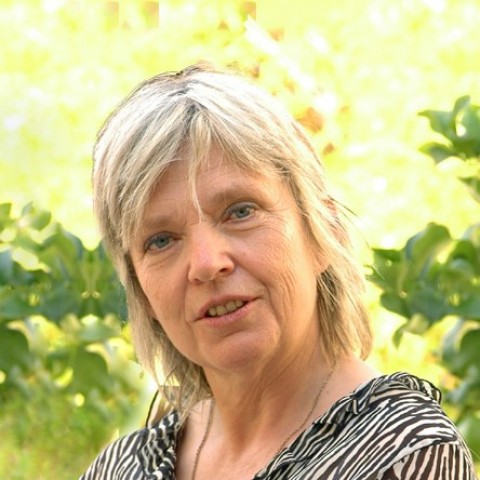