Well, It Was Fun While It Lasted. Anyone Else?

I was exctied to make my April update post because my traffic was going up so nicely!

You can see that here.

Well, it was fun while it lasted!

My traffic has dropped like a bomb the past week or so. 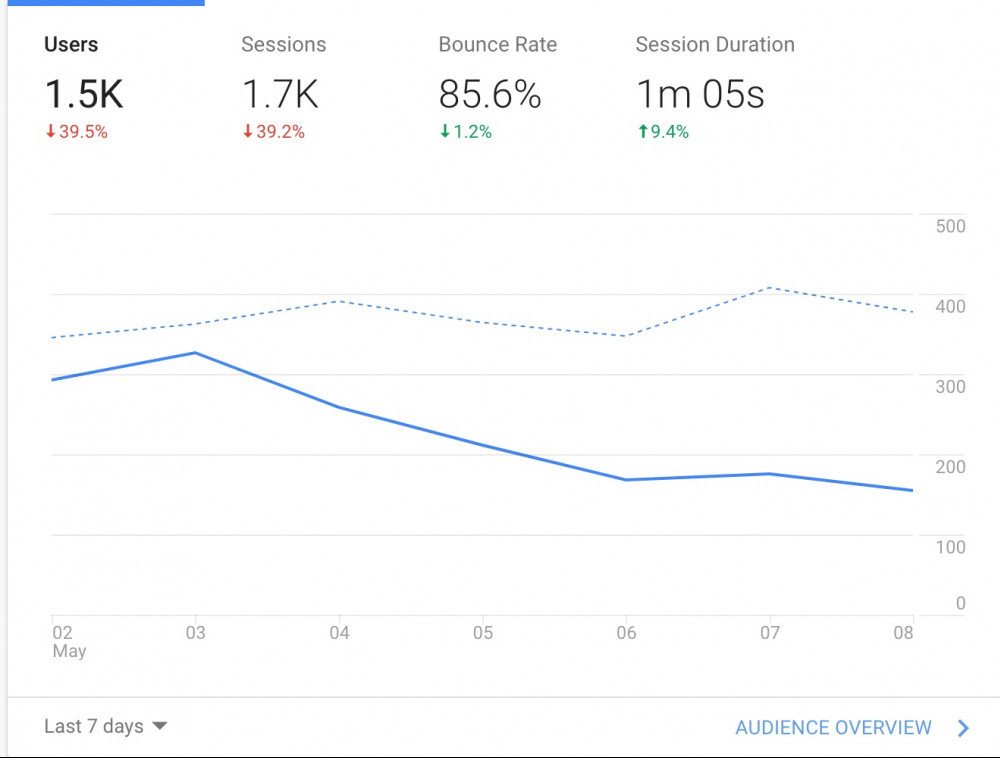 I know Google is in the process of, or already did an algorithm update.

So maybe it's from that.

I may have also gotten bumped from some good spots in Google. Maybe I had some snippets and they're gone?

This is how it goes with Google.

This is a reminder I really need to expand more into other sources of traffic - mainly YouTube and Pinterest.

Has your traffic changed at all since the algorithm update?

I'd love to hear what's happening with your traffic lately. Let me know in the comments below!

P.S. I've been doing this long enough to not be super worried. These things happen and you just gotta keep moving forward. :)

I know these metrics/stats can have importance and help us make adjustments if needed, but the only metric I have ever used is how much money did I make this month?

And I don't get excited about that either, because its going to fluctuate for a multitude or reasons.

I just keep moving forward and I am never going to give up in whatever I am doing and funny thing is the income keeps growing as time goes on.

Reply Like Like You like this
cld111 Premium
@MelWaller
Yes, you're so right! There are tons of factors for why these fluctuations happen. Just gotta roll with it!

Reply Like Like You like this
chiew76 Premium
Hi Christina,
My site is relatively new, and was only getting around 8 views per day, but was at least getting views. From 4th to 7th I had zero views, and then finally yesterday I had 2.

I know it's probably too early to know with a site like mine, but I did wonder if it was the new Google update.

Anyway, I think if we continue to provide valuable information and keep our readers in mind when we write, in the long run these updates shouldn't affect us too much.

Like you say, driving traffic from social media can also help in the short term.

Reply Like Like You like this
cld111 Premium
@chiew76
Good to know, Chris! If you're still early days, so it could just be Google figuring out where your content goes and which keywords to rank.

They'll let you rank for more things eventually, which will bring in more traffic.

I hope you see a resurgence in traffic soon!
All the best
Chris

Reply Like Like You like this
Dave07 Premium
Hi Christina
Yes I have seen a flattening off in Google traffic in the last month too. Some posts still doing well but many getting little or no traffic at all,
It's definitely a reminder of the importance to have a range of traffic sources. I'm focusing on building up YouTube at the minute and still getting some from Twitter too.

Reply Like Like You like this
cld111 Premium
@Dave07
I definitely need to work more on expanding my traffic sources. There's just so much to do with so little time! It's hard to focus on too many things at once.

How is Twitter going for you? I have a love / hate relationship with that platform. haha

Thats why I like Youtube - create a video once and it can send traffic to your site for years!

Yep mine was going up nicely in April and bombed in the last week.

I have read that this situation will persist until the algorithms settle down with the new instructions and as you say always the case. Authority sites are being hit in both traffic and ranking and newer sites are finding it harder to get a look in.

However I believe there will always be ups and downs and you have actually hit the nail on the head how we become more resilient through ingenuity and adapting to lessen the effects.

Still you were made very happy by seeing the numbers!! ha ha

Have a great weekend!!

Reply Like Like You like this
cld111 Premium
@RamiSociable
That's good to know! I don't wish for anyone's traffic to drop, but it's nice to know I'm not alone.

We'll just wait it out and see what happens in the coming weeks...!

Reply Like Like You like this
RamiSociable Premium
@cld111
Christine, we have no choice we can only hope the algorithms come to their senses and restore us back to our hard won positions....its a ghastly sight on our charts presently!! ;

Reply Like Like You like this
nudge1969 Premium Plus
I haven't really noticed a change in traffic, I'm generally around the 200 - 230 visitors per day mark for the last 2-3 weeks.

Although you probably remember when I had a huge spike in traffic last year. For 3 days I had over 1k visitors, then it dropped over the next 2 weeks to roughly where I am today, lower actually.

I think it all depends if a post you've written is getting traction. It may be a popular keyword for a period of time, then drops off, or other bloggers get higher rankings over you.

So many variables, just keep working at it Christina.

Good to know your traffic is approximately the same. It helps me to have an idea of what others are experiencing.