Last Update: April 04, 2013
Breast cancer really... she is only 30 yrs old. This is the news that we received around two months ago about the mother of my grand babies and the wife of my oldest son. This on top of already living with a very severe autoimmune disease since she was 18 she and my son have been married coming up eleven years. Many things have happened since then. Two beautiful children and, many times in the hospital due to her disease.

Not sure what I was going to do.

After losing my job and while looking for another one I was able to work around the house finishing projects long ago started and cleaning up. My home was now becoming a place that I enjoyed being at. During those times, it was clear why I should get things done. And why I needed to be home. Because the best place for the kids was here with grandma on the ranch,during Becca's times in the hospital. I was also able to help with the kids while she was convalescing at home.

This news came just as I started here at WA which makes more the reason I need to be at here and work from home. Being available for this beautiful family obviously was mine and Gods priority.
She is weeks past her last radiation, and now on the other side of a staph infection. She is in remission. Still dealing with the effects of the autoimmune disease. But improving every day.

Not always sure what Gods plans are.

There are times I must confess when we say ok Lord what are you doing. Then God reveals himself in the small things were we tend to think he is not there. While watching TV recovering from one of her extremely hard radiation treatments. My girl saw some yellow tulips. She then shared with the person with her. Look at those flowers aren't they beautiful.
My son was at the store buying, groceries to bring home. When looking over and seeing yellow tulips, he felt like he should buy them for his wife. Now keep in mind he never buys flowers except for the festive occasions that men buy flowers. He really was not aware of her desire.

God know the desires of our heart.

You can only imagine the shock and the tears that came, when his wife realized that God brought her flowers. I believe that God knows our every thought, and his ways are not our ways. When we see a muddled mess, God sees his plan. Being here at WA and being available for my kids right now, is where I am supposed to be.
Some people say that we see the back of the unfinished tapestry and God sees the magnificent finished front which is me and you

Not sure of all Gods plans, but one thing for certain I know he loves us.

Write something…
Recent messages
nathaniell Premium Plus
Amazing story. Remember, if you need any help with anything, I and many other members are here to help you get on the path to success.

Reply Like Like You like this
wtbee2013 Premium
Honestly that means a lot thank you very much, Really the reason I wanted people to know, I felt bad that I had signed up for the webinar and I was looking forward to the hang out I missed them both I just wanted people to know why....and I am sure other times this may happen.

Reply Like Like You like this
DoubleTap Premium
Wow, that was Potent!!! It's one thing to have a grasp on the limitless power of God, but it's another thing to have even the slightest grasp as to the sovereignty of God. God job, Kymee.

Reply Like Like You like this
smilley Premium
My father had Multiple Myloma cancer and he was uplifted by prayer. I'm glad he's still alive and that's an answer to my prayer! I would add that a fervent prayer can make a difference!

Reply Like Like You like this
smilley Premium
What I forgot to mention is that timing was a critical factor in his recovering. You can make it out early from some cancers and treat it, where as others, it is sad to say you can't. Every cancer is different.

Also, if you do have an untreatable cancer, or you know you have a certain time left, do things you always wanted to do. One of his coworkers did so and felt happy about it afterwards, even though he wasn't really suppose to do that!

Reply Like Like You like this
splashduck Premium
Kymee, you really are a spiritually minded person with a nice way of expressing your faith. That's so nice that you can be there to help your loved ones. Hoping the best for your family. Robbie :)

Reply Like Like You like this
wtbee2013 Premium
Thank you she could use all the prayers she can get. she has a long road ahead of her.

Reply Like Like You like this
kalg Premium
I was told once by a very old nun, if that was what she was! (she wore the attire that nuns wore)

I thought I would ask her a question when I used to sell carpets waaaay back in the 80's and she happened on our carpet store.

I said "Just because people don't go to church doesn't mean that they won't go to heaven, right?" (my thought was there was good in all walks of life, so why should there be a special group that says so)

She said "people are going to surprised"!

i'm not religious, but I know there is a higher power out there for sure!

I wish your family extended health and happiness! 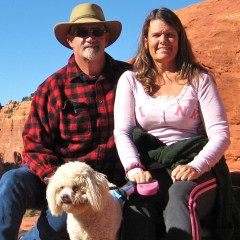