Mud Enough For Everyone

I thought I would cheer everyone up with a story of what a day during the rainy season is like in the Philippines. This event happened before we left and I just wanted to share it because there are so many who need to find what is going right when everything seems to go wrong.

I got up dark and early to a grey sky, it is the rainy season here and it is to be expected.

I was cheerful about it and went on my walk/run thinking if it rained I would duck in somewhere and wait it out. When I got about halfway thru, about 6k away from home the rain hit and it hit hard. When the rain comes down in the Philippines often it is like having a bucket of water just poured over your head, this is what this downpour was like.

I headed for the nearest building and ducked inside. Once inside I was greeted by three dogs who did not care for my company at all, I decided to leave and ran out, chased by the dogs.

As I continued to run and I turned to look if they were still following, they were not so I turned back, right smack into a Carabao, a rather large beast known as the Water Buffalo of the Philippines. Guess who lost the encounter! I was knocked into the mud, or what thought was mud anyway.

When I returned home, wet, tired and covered with "mud" I was told in no uncertain terms I was "bahote", meaning stinky, now you know what the mud was. LOL

I took a shower and washed my clothes and hung them on the rod on the front patio to dry with the other laundry and went about my business.

We have been trying to sell our car before we head back to the states and we had interested parties show up this day to look at it. The car would not start, it has never done that before. I was frustrated so I popped open the hood, stepped out of the car and hurridly went to open the hood.

At the front of the car was a very slippery patch of mud, real mud, and I slipped in it and you got it, down in the mud again. Only this time when my wife tried to help me up, down she came with me. It was quite a hilarious scene and the neighbors enjoyed it thoroughly, at least their laughter made it seem so.

So back to the shower, wash the clothes and hang them to dry. I began to work on my blog here at WA when I was greeted by that rod of clothes, right on top of my head. The brackets holding the rods gave way and down they came.

I was laughing at this time because it seemed like the right thing to do. Getting angry and frustrated was not going to help anything. So, I went and got some tools, fixed the rod and put the clothes back up.

I was heading to the tool shed when I was yelled at by a neighbor saying "hey Joe", meaning hello. I smiled and waved and stepped in the wrong place and guess what. You got it back into the mud I went.

This time I did not try to get up, I did not get angry, I laid there and laughed, hysterically. My wife came to see what was wrong with me, I pulled her down into the mud and she started to get angry but soon my laughter made her laugh too. 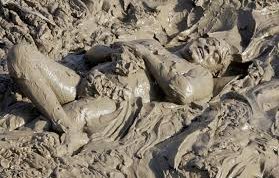 She picked up a handful of mud and slammed it down on my head. This made me laugh even louder and the neighbors began to watch. We looked at them and waved still playing in the mud. The neighbor children began to come over, some of the boys dove in and played with us, then they all of the children joined in.

All in all I would say there was about thirty of us rolling around playing in the mud, it was like a scene from some movie. The neighbors, adults, stood around watching, laughing so hard they had to hold their sides.

We were a mess, no one had a camera that I was aware of, so we just got the hose and started washing each other off. During our bath the rain came again and helped to finish the job.

I have not had so much fun since I was little, I am thankful for the experience of the day. I did not get it the first time it happened or even the second, it took three times for me to learn this day's lesson, enjoy life, it only happens once.

Remember, no matter how grey skies are or how long you are in the mud, there is something joyful about it, never give in to the negative side of life.

Never give up, never give in, never quit.

Write something…
Recent messages
TheAnswerGal Premium
Too funny!!! Thanks for sharing your day with us!
Linda

Reply Like Like You like this
TheFatGuy Premium
@TheAnswerGal
You are welcome, hope it gives you as much joy as remembering gives me. Now when I am having a frustrating day I remember this day and find joy in the present.

Reply Like Like You like this
TheFatGuy Premium
@Ericabried
It was not so funny while I was going thru it until the end, when the mind of children reminded me of the joys of life.
Thanks for laughing with me.

Reply Like Like You like this
momo19 Premium
loved your story still laughing while typing this.Thanks for telling us good moral to the story you are right dont let things get you down see the funny side!!

Reply Like Like You like this
krazykat Premium
I love it San.
It is good to loosen up and have fun isn't it....even in the mud :-)

Reply Like Like You like this
TheFatGuy Premium
@krazykat
I was so frustrated with my day up to that point, but the neighbor kids showed me it is more about having fun than being upset and frustrated, I just had to laugh and it really taught me an invaluable lesson.

Reply Like Like You like this
TheFatGuy Premium
@bnaylor
You are welcome Bryan,
I live to make others smile and relax. Life is to short to always be busy trying to make a buck. 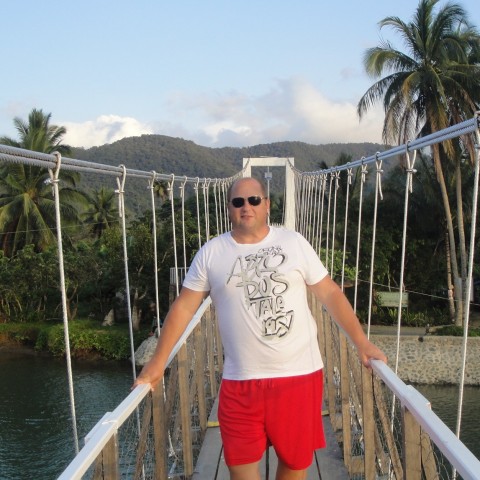