Chunking Down For Action: Plan For Success Part 3

In my previous post, I referred to the importance of setting appropriate SMART goals and expanded on the subject of chunking up; a simple process used for clarifying why a particular goal has been set. Discovering your 'reason why' is the key to remaining motivated when things get tough (at some point they almost certainly will).

The next step is to discover and commit to whatever actions are needed to achieve your goal.

Assuming that you have figured out why you want whatever it is that you want, the next step is to figure out what actions need to be taken to achieve your goal and the order in which to take those actions. In other words, create a plan.

There is another powerful and straightforward chunking process; this time chunking down and sideways, which is described below ... but first here are a few points about goals and action steps.

Every goal will have one or more action steps leading towards it. If no action steps are defined, no goal will be achieved except perhaps by accident.

Every action step must have a goal of some kind as an outcome; if you cannot define an outcome then the action has no point.

So when chunking down (as described below) it is important to recognise:

I make no apology for repeating that every outcome or goal will have at least one defined action associated with its achievement, and every defined action will be designed to achieve a defined outcome.

Before starting to chunk down it's worth spending a couple of minutes reviewing your goal. Imagine that you have achieved the pre-defined outcome, imagine that you are there already, before asking the questions.

When I facilitate a group or coach an individual, I often ask them to pick a spot in the room other than where they are already positioned. They then look in the direction of the new position while reviewing the desired outcome (just for 2 minutes). I invite them when they are ready to physically move to the new position. From there they literally look back at where they were as they answer the questions.

This might sound silly to some, but it works well because it helps to focus the mind. If you stand at the top of the hill you've just climbed, it is usually easier to see the route you took than to see the route from below.

Chunking Down And Sideways

Chunking down means breaking something down (a goal or outcome in this case) into its component parts of smaller outcomes and action steps. Chunking sideways is often used alongside chunking down and will become clear as you read on. Similar to chunking up, the process of chunking down and sideways involves answering the following questions:

Start With A Brainstorm

Unlike when chunking up, this time write your defined goal at the top of a page.

Then ask yourself the questions, writing down everything that comes to mind. Don't question your answers yet. No criticism is allowed at this stage.

Just focus on the two questions in relation to the defined goal...

For every answer you write down, ask the same questions again.

When you have a list of things to do and achieve, the items then need to be organised.

Be aware, this is usually the longest step. You might find some items that don't fit and are not needed. You will probably find new items to add. Clarity will take time. How much depends on the size and complexity of the goal.

Personally, I like to brainstorm into mind mapping software or to use a block editor such as a page in 'notion.os'. I like to write things once which can then be moved around easily. Since I am currently writing in 'notion' the following examples are images of content on a notion page.

I simply started with the goal at the top of the page and repeatedly asked the two questions.

The first image is an initial brainstorm. The second is a re-organised version with more clarity and additional items that occurred to me as I got organised. Here I have written the list literally as a chunking down list, which should then be read (and acted upon) from the bottom up. If I was creating this plan with other people in mind I would normally reverse the order of the list. 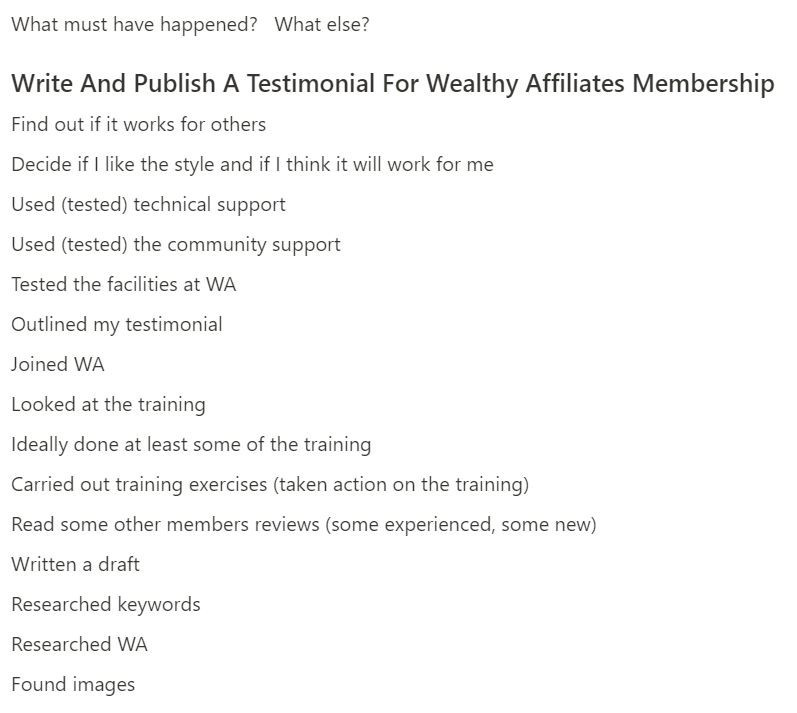 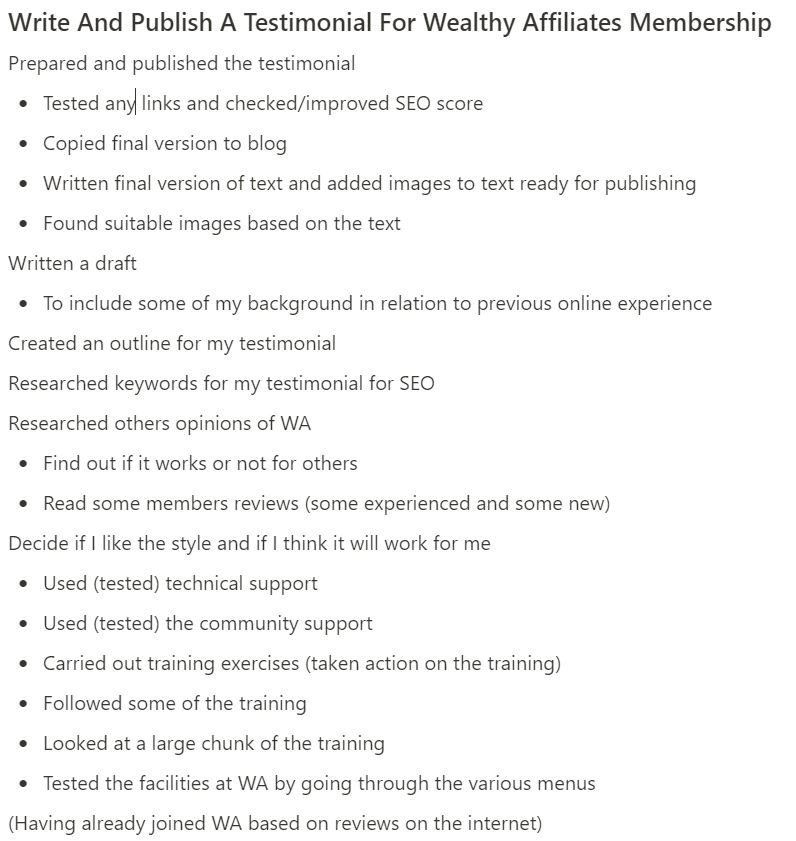 As Benjamin Franklin famously said: "If you fail to plan, you're planning to fail". Most people know this already... but it is uncanny how many people ignore it.

The process of chunking down, like chunking up, is in essence very straightforward. Simple but effective. Never underestimate the power of ideas that appear to be simple.

The main questions to ask when chunking down and sideways are:

When your plan is ready... just get started... take the first step and keep going.

Personally I regard every action as a mini goal.

If you have any questions or comments please add them below ...

Once again thank you for another great and informative blog post, it's appreciated.

It appears that you are very organised, I like to be to.

There are also some other very simple aspects that work for me which is; having a tidy desk, not too many tabs open and starting early in the morning (this is a must for me.) If I don't start early, I really don't achieve much, I like to be up at 5 AM and take full advantage of the day. Also at this time of day, I'm not receiving phone calls from clients for my off-line business.

There's only one problem, I'm an early morning person, my wife is a "send a really complicated email at midnight", person!! I find by mid-evening my brain is shutting down, but my wife is coming alive!

Have a great day and thank you.

Reply Like Like You like this
richardgb Premium
@Roybretton
I also prefer doing creative thinking and writing when I am fresh but unfortunately my current lifestyle makes that difficult (helping out at my wife’s care home means late nights).
That will change soon for the better
Richard

Thank you for your reply.

I sympathise with you regarding having late nights, especially if you're a morning person. I hope this changes soon.

Reply Like Like You like this
Christorv Premium Plus
It is really worth it reading through some of these posts on WA, this is quite informative, Richard. Indeed, "If you fail to plan, you're planning to fail" - taking this with me

Reply Like Like You like this
Lewsoftbal Premium
I teach Business Education in high school. This was a great write that I can take parts of to provide to my students if you do not mind. My whole site is geared toward daily motivation and life skills for my students. Thank you 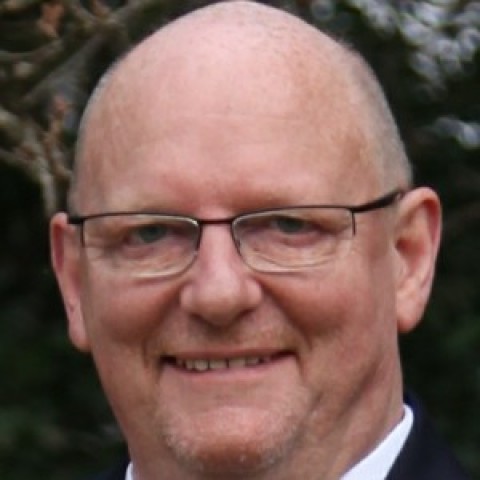