Have you ever had something challenge everything you were taught about a particular story or experience? My memory was jogged today when I did a finger play with my Kindergarteners. Finger play? Oh, I love it! That is when we actually do something with our fingers. You see, at least in what I see in education today, there is less and less that you see children using their fingers. That includes using their fingers as a tool in counting or even opening a package of ketchup. You know there are kids out there who have not learned to develop their wiggling finger and hand skills called fine motor skills. I am talking about regular education! I am talking about even 5th graders.

So you can imagine my delight when my schedule I was to follow involved finger plays. It was a surprise last week, my lead teacher made the comment that children were having a harder and harder time retaining the ability to count and identify their numbers. I just made the side comment that the old finger plays that teachers used to do were very helpful. Kids need to get up and move. You cannot learn and make sense of something real like numbers and counting on a screen.

I was most surprised when she got all excited and said she had some fingerplays and that she remembered doing them a lot in the past. She told me I was free to use the finger plays and so I appreciated the permission to do something I feel strongly about.

Anyway, the bag of fingerplay kits included a blue glove that velcro would stick too and little figures. I pulled out the one with some farm animals. Immediately, one of the students said it is "Old MacDonald Had a Farm." I said, "be careful, we cannot assume that all farm animals means that song.

So little by little I laid the different animals on the floor and we all looked at them. Then I had the girl find the hen. The boy could not find the dog. I was surprised because this is a very smart little boy. By the way, I forgot, the boy is 3rd grade. The girl was Kindergarten.

Anyway, the boy did not see the dog was a dog, because he was holding a book. I think it was one that was perceived as being chewed on. Then the girl found the dog. The cat, pig, and the goose were all found. Then the stalk of wheat was located and then the bread.

I read the story of the Little Red Hen. Each time the little red hen asked the other animals to help with a a job, I had the children take turns assuming the characters of the other animals. I encouraged them to use different voices such as the animal sounds and different tones to their voices. I did the same. I mainly used my clown voice.

So we read about the Little Red Hen. During the story she asked:

Who will help me plant this grain of wheat?

Who will help me cut this grain of wheat?

Who will help me take this bag up to the mill and grind the wheat into flour?

Who will help me bake this wheat into a loaf of bread.

Each time, the Little Red Hen would say, "then I will do it myself." And she did.

Now when the Little Red Hen baked the bread, there was a delicious smell that came from the oven. She asked, "who will help me eat this bread?"

The animals decided they were hungry. That was an easy question to answer.

I remember a time many years ago, I was trying to teach my oldest son the right way of living. One of the terms I was using at the time, is that we do not want to "burn a bridge." Meaning, even if there is a disagreement, we want to try to smooth it over for another day.

Well, I had read this story to him. I think he was about 8 or 9 years old. I was quite dramatic at the end and I shut the book like (well, she showed them).

That is when I recieved a response I had never heard being associated with this book. It was always, she got the best of them. I had experienced that with my Mother, Grandfather, maybe my grandmother, my teachers and so on and so forth.

My dear and wise son said to me, "mamma, that wasn't very nice." That is when my brain did an abrupt halt! It was like a car squeeling its wheels to stop abruptly. Not very smooth either. I said, "but what about them not giving her any help?" He said, "mother, she burned a bridge." I had to stop and consider. After all, my son had listened to my teachings of the past. I decided to start to consider it.

Now, many years later, I realize he was right. It was my mind and thinking that needed to change. We need to give, even if it means we do not get our own way. That was a life lesson that came in parts.

Write something…
Recent messages
montewolfe1 Premium
It is nice when our children listen to us, I remember reading that story to my kids. Thanks for bringing back the memory. My children are 38 and 39 and have children of their own, I am sure they have read the story to their children as well...good luck and good life!

Reply Like Like You like this
reading Premium
@montewolfe1
I am glad you enjoyed this. I like the books from the past. The newer little red hen go by the story too quickly. I like stories that cause your emotions to kick in.

Reply Like Like You like this
reading Premium
@Christabelle
There have been words of wisdom pop out throughout the years. One time maybe in 2006 he said, "It is not my fault I am spoiled!" Another time when he was about 16 years old, he said, "we know we can get away with it, that is why we do these behaviors.

Reply Like Like You like this
HelenpDoyle Premium
I have to admit I would not starve them but put them on smaller rations! After all, help is give and take.

Reply Like Like You like this
reading Premium
@HelenpDoyle
Now that would be a balanced response. I agree. How do you share 1 loaf of bread with that many anyway. I do not think it was a very long loaf of bread.

Reply Like Like You like this
HelenpDoyle Premium
@reading
Yes, sharing is easy if there is only two. One to cut and one to get first pick!

Reply Like Like You like this
reading Premium
@HelenpDoyle
Funny you mention 2. There are 2 little boys who have been quite competitive about their chair in front of calendar time. I am teaching them that they are to pretend a revolving octopus is in the room and he got your seat. What are you to do? Sit somewhere else. If that chair is then taken sit somewhere else. If all chairs are taken sit on the floor and you will be a much happier human growing up. 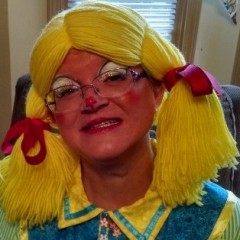