Not a Happy Camper 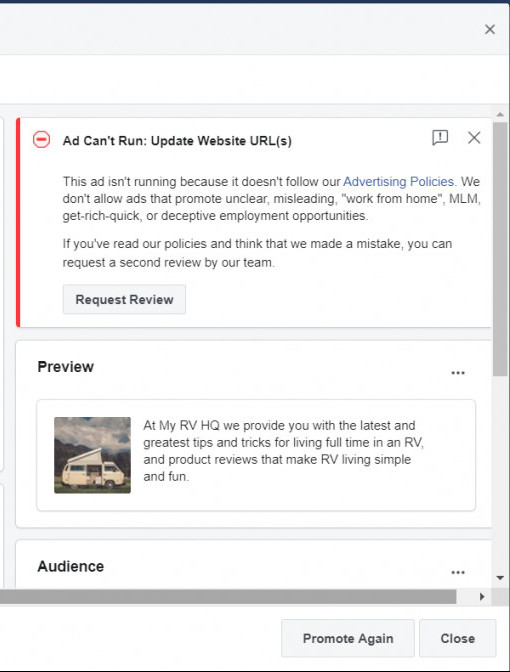 So, I've been trying to promote my site on social media for a couple weeks now with absolutely no luck.

Facebook shot me down saying my ads were about either MLM or making money, both of which is absolutely not true. I run a website that is about owning and living in an RV.

Instagram gives me the same reason. I don't understand. I see those kind of ads all the time on both Facebook and Instagram. But neither my ads, nor my website is about either of those things.

The final straw came the other day when I tried to promote my website on Pinterest. I was actually banned from Pinterest for one lousy promotion pointing to my site. BANNED, as in I can never use Pinterest again. I've been on Pinterest for many years with tons of posts and tons of boards with all the stuff I love saved on them. My own personal photography artwork is saved in many boards on there. ALL LOST, FOREVER! I am way more devastated about Pinterest than if I ever lost my Facebook or Instagram.

Yes, I know I can sign up again with a different email. That's not the point, the point is I lost everything I had been saving for years because of one stupid ad and yes, I appealed, to no avail.

I'm not blaming WA, but I was just following what the lesson taught about promoting on social media. I just don't understand what went wrong.

Write something…
Recent messages
JeannineC Premium
Take any mention of WA off any site that isn't about WA. I've seen so many sites tuck something about WA into them, and it just doesn't work, and sadly can get you penalized.

Sites must be pure and focused. Tossing in something that makes no sense is a red flag to social media these days, as too many users have tried to sneak in stuff that way.

I'm very sorry this happened to you. Thanks for allowing it to be a lesson to others before they experience the same thing.

Reply Like Like You like this
JeannineC Premium
@JeromeEllis
It's so frustrating when they've decided something and you are at their mercy. Sadly, any promotional opportunity other than your site can be taken away at a moment's notice. That's also why I always tell people to use Wordpress.org, not Wordpress.com. I've seen great sites disappear from the .com system without warning.

First up, I had a look at your site and must say huge potential, don't give up, you are getting stuck in creating content, there will be an audience out there the RV lifestyle is growing worldwide, driven largely by the boomer generation.

When it comes to advertising all the larger platforms generate most of there income from advertising, and I believe the last quarter of 2019 was a record one for Facebook, the profit was in the billions.

One of the traps that we can fall into is getting into paid adds to early in the evolvement of a web property. It can be annoying when we breach the terms of service of the platform we are advertising on, from observation they are very unforgiving and there is a lack of transparency when they take umbrage.

Nine times out of ten we are totally unaware of the reason why they take the actions that they do.

The question would be what were you promoting, that caused these platforms to take this action. It would be really informative for us as members to take note, as it may help others to avoid such outcomes. If you were promoting your website, it would fall within their advertising terms of reference. It can be the call to action and where it leads that can get us into strife, especially if there is a lack of transparency for the user.

If you have a long term relationship with the likes of Pinterest It may be worthwhile appealing, never give up or give in for that matter, it is the squeaky wheel that gets oiled.

It can be tuff when we get kneecapped, no other way to say it.

A setback but once again a good reminder create that website and it is your property you own it and you direct where it is going.

Best wishes, I look forward to reading about your successes.

Reply Like Like You like this
JeromeEllis Premium
@AlexEvans
Thank you for such an in depth response! I will certainly take heed if what you have said and shall push on!

Reply Like Like You like this
JustAPerson Premium
@JeromeEllis
Thanks! And you are positive the url is all going to your rv site. No possibility of a typo?

I definitely understand your frustration. It .makes zero sense why they are talking about "work from home", mlm... basically ANY kind of moneymaking thing these places seem to see as being the same... BUT why they are even talking about that here in your case is odd.

It's like they think you built an entire rv site as a means to trick people into joining a moneymaking program.

What is most confusing to me is why multiple platforms all came to that same conclusion. It makes me wonder if it is some person reporting your ads as misleading and the platforms just tokm then at their word?

Pure speculation there but such things do happen.

I haven't done any FB advertising yet but have heard many times the best way is to create a page on FB and have the ad pointing there. Then that page can link to the website.

I completely get these places all being tired of people promoting moneymaking stuff spamming everywhere but they have to realize there are completely legit opportunities and many millions of people who can benefit from them.

But again... why do they even think yours has ANYTHING to do with such things?! If they would at least COMMUNICATE with you be a very good and professional thing to do.

Reply Like Like You like this
megawinner Premium
You can start again. If we fail, it is but natural. If we don't fail, that is horrible. Ask yourself are you at the university of life? Life gives us more lessons when we fail. Winning is there, just keep moving.

Reply Like Like You like this
DouglasPlumb Premium
That is the worst to hear. I hope that you can find a way to move forward and push ahead. Sending good vibes from here to you there. All the best.
Douglas 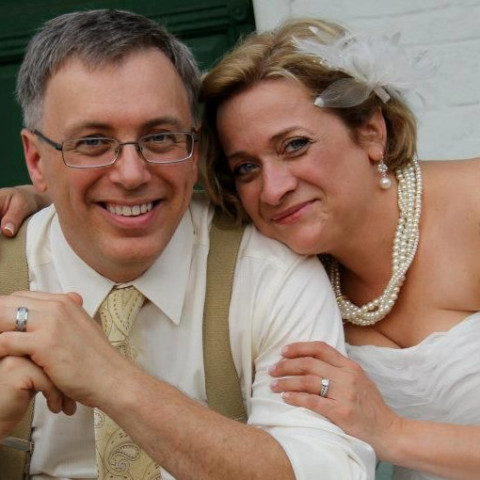