I've blogged a few times before about having a team, but I wanted to share some more info about what it's like.

I know that the majority of people here are just starting out, and you may find it hard to relate to this kind of post, so I apologize for that.

However, when my business was growing to the point where I did need to start hiring people, I found there wasn't really much information at WA, since it's so beginner-centric.

So hopefully, when some of you reading this DO reach this point, this post will be able to give some insight or inspiration to you.

From July 18-27, I flew 5 of my main team members to Berlin, and the six of us (plus a few spouses/partners) did some activities and planning the future of the company. We picked Berlin because it was a destination that didn't require anybody to have to transfer more than once, and wasn't particularly expensive either.

It also had a good balance of culture, and some coworking spaces available within walking distances of hotels.

My team members are normally based in Finland, Minneapolis, Toronto, Calgary, Taipei, and Chiang Mai, so even planning an event like this is a complete pain, because we have to try to find somewhere that's not too expensive or arduous for every one to get to.

I was going to be in Europe in June anyway, so we thought it made sense to choose Berlin, and I'd just extend my stay in Europe by another few weeks. Having the freedom to do that kind of thing (or at least, wanting to create that kind of freedom) is definitely something you can all relate to.

It's important to have a get together once a year though, because we can cover so much more and go into more depth.

Having a whiteboard and a flipchart and 5-6 hours in the same place really helped us discuss problems and plan the next 12-18 months of the company.

It's the weird kind of CEO type stuff I never expected to be doing when I first walked through WA's doors in August 2012 (coming up on my 6 year anniversary soon!).

In the evenings, we did some outings together and were joined by a couple of honorary team members (partners and spouses).

Here's a trip to the Berlin Wall we did: 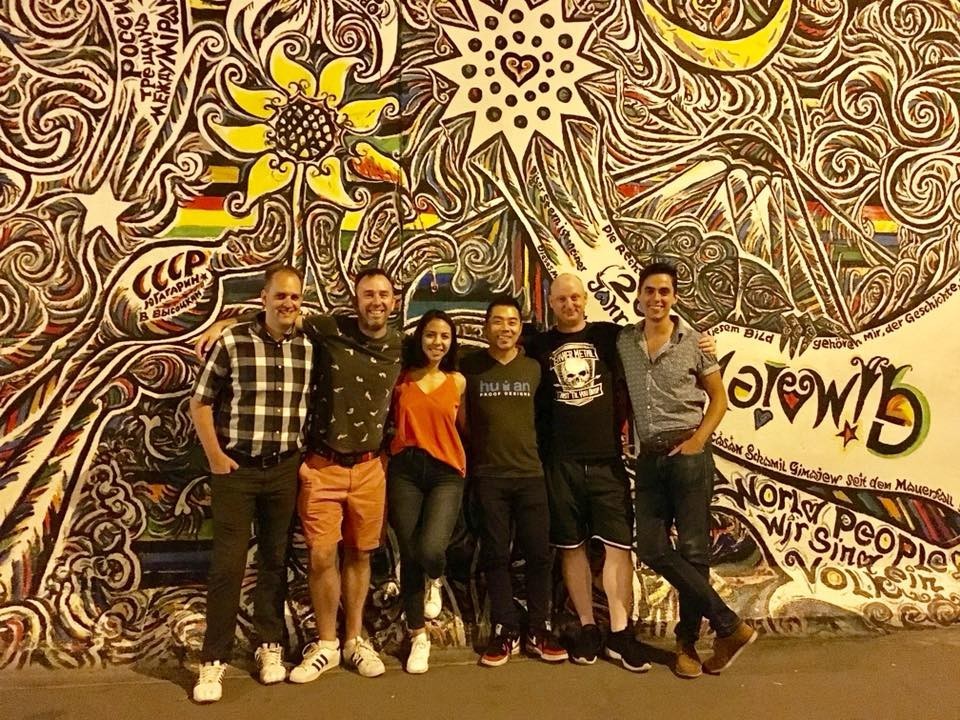 But Why Have A Team?

Ok so I've given some context on my team and what exactly we got up to last week, but you're probably sitting there wondering, what exactly is the point of having a team? Why spend money on employees and have to deal with all of these things?

Well ultimately, having a team can help you make more money.

But not only that, it can give you freedom too.

At the end of the day, I think of a team as buying other people's time. If my business needs 100 hours a week to run efficiently, I don't really want to do 14 hours a day myself.

And in reality my business probably needs 200 hours a week, and I certainly can't do 28 hours a day..

So buying other people's time is one solution, and many members here at WA probably do it too, just on a smaller scale.

If you've paid writers to do articles for you, paid someone to upload articles or do keyword research, then you've also been buying other people's time.

It's not just about time though...

Focus is one of those intangible things that you can't really measure. It's easy to say "Ok I need more hours in the day to get my tasks done, so I'll hire someone to do them for me".

But you can't exactly do that with focus.

Still, focus is incredibly important, because the more of it you have, the higher quality the output will be.

For example, I'm terrible with operations, management, and fulfilling the services that my company offers. So, I hired a Chief Operations Officer (fancy title I know!), to run all of that for me. I pay him very well, and he focuses on this arm of the business. Not only does this give me a bucketload of free time to focus on sales and other growth areas, but it also means our Operations arm is way better than it would be if I was still trying to run it myself.

The same is true for expertise.

One of my team members is a lot better than I am at code, he can do stuff with Wordpress that I don't even know is possible.

He understands the technical answers that hosting support gives me when my server crashes.

..so it just makes sense to have him be the one who focuses on technical stuff, and he fills the CTO (Cheif Technical Officer) role.

He does the job better than I can, so not only do I not have to do it myself, but it gets done better anyway.

I also run my own portfolio of websites, and partner with a few other people on their sites.

As such, I needed someone to "run" the portfolio. I could do it myself, but it would take up all of my time. I could get some Virtual Assistants to do the actual gruntwork, but I needed some higher level thinking to deal with strategy and making sure the portfolio is growing (and more importantly, not being neglected).

So again, one of my leadership team is now solely responsible for running this arm of the business.

Now I know what you're thinking, all of this sounds expensive, and yes it is. It can be stressful making sure the business brings in enough money to pay for everybody's salary too.

But this type of team isn't created overnight.

As I said at the start of this post, many of you reading this may be thinking "I am nowhere near that level, I don't even have any income coming in yet"...and that's fine.

I started out with a maxed out credit card and only the ability to pay for WA annual and Jaaxy annual. This meant my expenses were pretty much zero, and I did everything else myself for 2-3 years.

But eventually, I got bored writing articles myself. I got tired of researching keywords, and I went insane fiddling around with Wordpress.

So I hired people to do that work for me, and the extra time I was given meant that I could either a.) Use that time to grow the business even more or b.) Enjoy having more time to myself.

Maybe you'll reach this point sometime soon as well, and this post will give you some insights into the kind of things that are possible.

Write something…
Recent messages
EddySalomon Premium Plus
Well said Dom. I quickly learned to reinvest the money I make right back into the business so I can focus on things I enjoy and to make more money. Having a team is key to that. My team is pretty small right now. But I aspire to grow where I can hire more people to do things I know will increase my revenue and give me more free time. Thanks for the continued inspiration. And by the way your team has been awesome writing my content. It's worth every penny.

Reply Like Like You like this
mmonterola Premium
Wow you are really big time! Thanks for sharing. You are also sharing your blessings to your team members.

It's nice to see what is possible with online business. And, I like your emphasis that it grows organically as the business and the needs do.

And, it's true, isn't it, that it's still about the choices of how to spend the extra time and money when it comes around. A person could still make different choices there and end up with a different outcome.

I have bought a couple of articles for my main site when I was busy with a product post and wanted to get another up for the blog. It was a nice feeling to have the time to continue what I was trying to focus on. I'll def do more of that as the income increases.

Reply Like Like You like this
Zarina Premium
While I am nowhere close to the point of having my own team, I've had experienced with yours (for monthly articles) and I must say that it definitely is a relief to have someone else to take over certain tasks!

You gave me food for thought, thanks man.