All You Need To Do Is Help More People

I know what you're thinking...

"Who was saying that? And why? And why did you start this post halfway throuh a conversation?"

Well I did that because I thought it'd be cool.

But let's go back to the beginning and meander our way to the point of this post.

Last month, June 6-10, I attended a conference on a private Island in Croatia. I was actually speaking at the conference on the topic of niche sites, but there were other speakers there who were mind blowing and talked about anything from investing, to Facebook Ads (One of the speakers owns an agency which is in the top 10 Facebook Advertisers...yeah they spend a lot of money on FB ads).

Another speaker, the guy who I am quoting at the beginning of this post, spoke about sharing your lifestyle on social media.

Essentially, there were four types of posts he recommended:

Now, one thing that had confused me, was personal lifestyle.

I share on WA some of my successes (obviously, since I mentioned it just now), but I rarely share on Facebook. My wife takes a lot of photos of our world travels, and tags me in them, so in my mind, that's the job done. I don't need to share lifestyle updates with my followers.

I feel like there's a fine line between sharing, inspiring, and downright bragging.

I said to the speaker "Most of my Facebook audience are my friends, or are some of my customers. These are people who are beginner affiliate marketers. They want the kind of lifestyle I have, but they're not there yet. I'm worried if I share an update about how awesome this Island is and how exclusive it is, they'll just get peed off or jealous, like I'm bragging about how awesome I am and they can't have it."

(Even successful people have issues!)

Jesse's reply was what I started this post with:

It was such a simple explanation but I found it to be quite profound.

There I was, afraid to "show off" how amazing this island was and how mind blowing the people on it were, and then suddenly I realize it's actually my duty to share it with people.

So here we go, I'm going to share it with you now! Take this as inspiration for what you can achieve if you stick to it.

And remember, all you need to do is help people.

What Was The Event?

I won't name it because it will come across as a promotion, but it was an invite-only event for 7-8 figure business owners, mostly digital entrepreneurs like us.

To qualify, I had to own a business which did over 7 figures per year (I just squeezed in there), and I had to pass a phone interview with one of the founders to make sure I was a good fit.

That was pretty cool, because I've been to events before where I didn't really know the founders and was a bit shy to speak to them at the event. But at THIS event, I already knew the founder and felt like I belonged there.

The price-tag was mid-four figures for 4 days all inclusive on the Island, that included unlimited alcohol, unlimited food, and everything else you'd expect. It was a pretty expensive event, but would I go again? 100% yes. My network has exploded since going to the event, and I feel like I will easily get 10x the value over the next year or two as a result of the money I spent.

I also got given a $2,500 discount because I was also asked to speak at the event, so I guess you could say that was my first "paid" speaking gig? 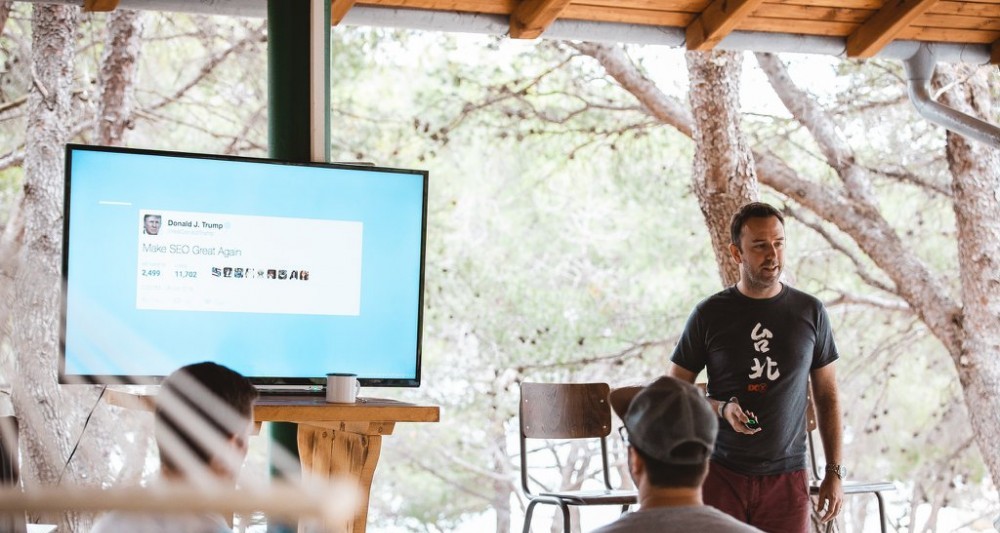 That's me, speaking to a crowd in a very informal setting on a beautiful Croatian island. You can just make out a hammock in the foreground. It was quite weird speaking to people who were half asleep at the back, but also, very very cool.

Bonus points to those of you who can read my t-shirt.

What Happened At The Event?

It was 4 days of content, plus evening socializing. At any giventime, there were three different talks taking place on the island, so you basically would walk to whichever "stage" you wanted to see the talks for. They had a pretty cool app as well to help you keep track of things.

There were about 4-5 sessions per day, so 12-15 speakers per day. So by no means was I a keynote speaker or on some pedestal. I was just one of a few dozen people who was sharing something.

In the evenings, we had dinner provided for us, which was a great opportunity to network some more and drink more. 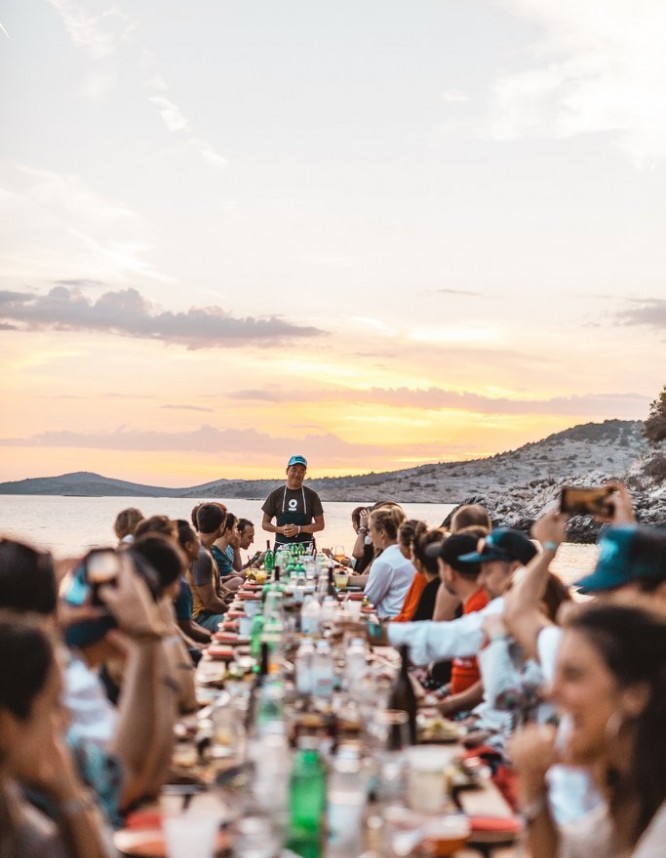 Then after dinner there was a band performing who had been flown in to perform. They were given the same all inclusive treatment and basically got paid to perform, but during the day were free to do what they wanted.

Best gig ever for them I'm sure!

There were also other activities like sailing, kayaking, and massages that you could have if you wanted to skip some of the talks.

In total, there were about 150 people there, and I felt like the dumbest and least successful of them all, which speaks volumes for how awesome the group was.

I'm in there somewhere...

Not many of them were affiliate marketers either, most of them have their own brands, so it was good mixing with a different type of person and cross-pollinating my learning as well.

Plus, a few people were interested in my services as well, which is always a benefit.

I think my biggest takeaway from the event was more of a mindset shift and a "levelling up" of sorts.

I do pretty well with my business and I'm very proud of what I've achieved, but suddenly being on that island with people who are 10 or even 100x more successful than I am, it was crazy.

It was like playing Mario World on the Nintendo, going through a random pipe on level 4, and coming out the other side on level 10. Suddenly you feel "How did I get here?" and "Am I out of my depth?"

Luckily, since everyone was curated and passed an interview to get there, there was no arrogance. Everyone was just awesome.

Remember, I'm sharing this because I want to inspire you. I'm not saying you should set this particular event as a goal, or even any event as a goal. What you should be doing is thinking to yourself "If I help enough people, I can become successful enough that opportunities like this will open up for me".

That's the real value in creating a successful business.

Remember what Kyle says about a niche? It's just a group of people looking for things. Your job is to help them find those things, whether that is answers, the right product for them, a service, anything.

We receive more when we give and inspire others.

In agree that it is a fine line between sharing and bragging - think you definitely did a good job inspiring us with this post.

I often see successful online marketers where it is just about showing their cars and talking BS - I think it is great how you focus on sharing in a truly helpful way and reminding us all how important it is too focus on helping others.

BTW What DOES it say on your t-shirt? HPD maybe ;-)