Hey, is that a DEER? CRASH!

I could have also titled this, "MIRACLE ON SCENIC HIGHWAY". 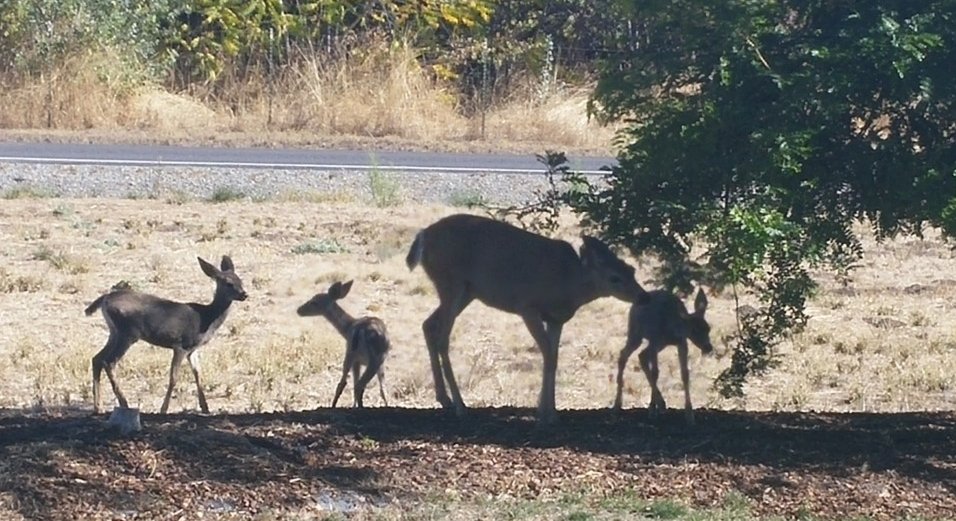 Last night I had a full-on miracle happen.

Around 8 PM I was out grocery shopping and for some reason noticed I was REALLY, REALLY CALM. Like dead calm. The reason that's remarkable is that I really hate shopping and am always kind of antsy and in a hurry to get done. I also had just finished with "errand day", many of which are irritating, at best.

So as I'm driving home this weird calm feeling stayed with me and I was driving REALLY SLOW. I'm not a fast driver anyway, but coming home at night I usually want to just get on with it. Unfortunately I also was so relaxed approaching the house that I also hadn't flipped my brights on.

So as I'm nearing the driveway I saw a flash to the left of me, crossing our property. I turned my head VERY QUICKLY and thought to myself, "Oh I bet that was a coyote... weird, it's kind of early for them..." and as I look back to the road a deer flashed into my right headlight RIGHT IN FRONT OF ME and I realized... OH MY GOD IT MUST'VE BEEN A DEER AND HERE COME THE OTHERS...

Mind you, I'm driving a Navigator and it's a big heavy thing, not inclined to swerve like a sports car, and all I could do was jog to the left a TINY BIT and hit the brakes.

I do remember there being a weird delay, as though I missed it, which was virtually impossible...

Then "THUMP CRASH... CLONK CLONK" and literally said out-loud (to the dog who was with me, I guess! LOL) 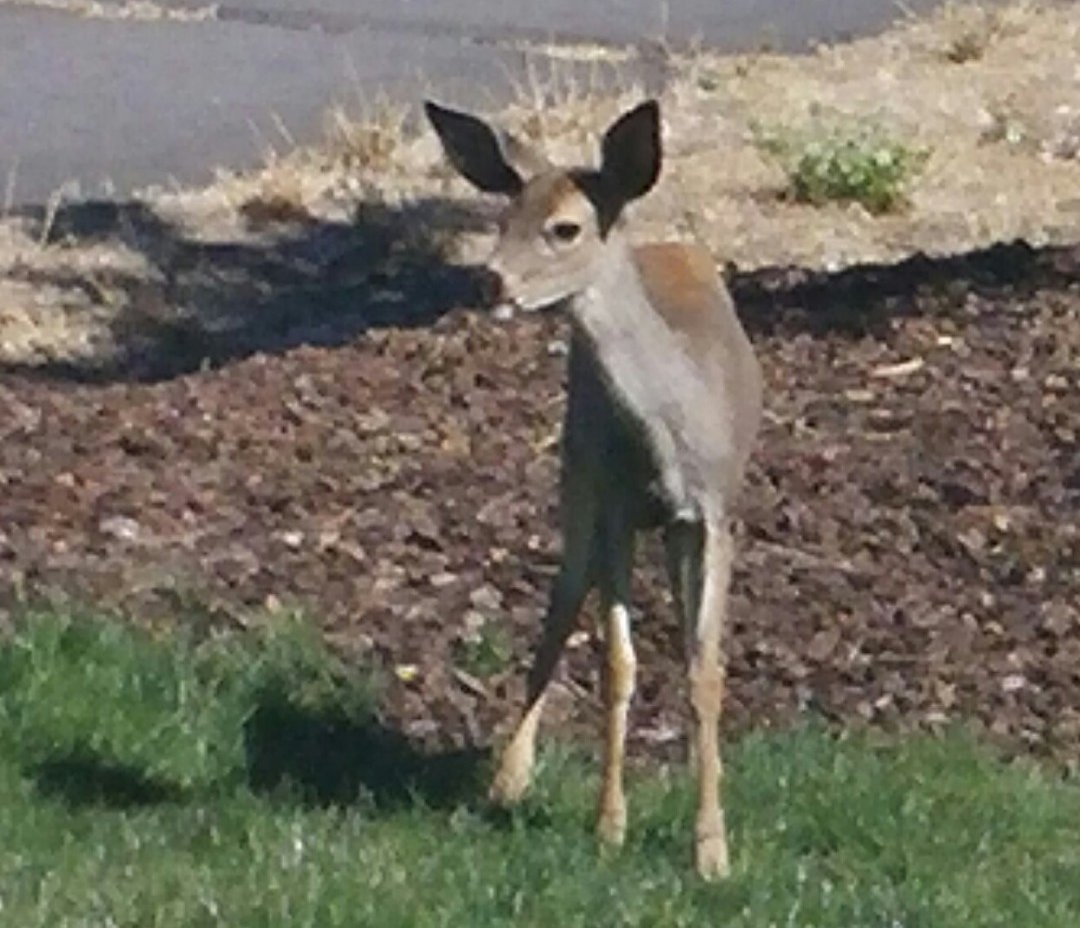 I COULDN'T BELIEVE IT! SO I hit the brights, sped up, wheeled into the driveway, threw the dog out (to her dismay!), grabbed my partner, who grabbed a shovel - I didn't have time to grab a lasso or anything but I knew I might have to come back and get something to rope it and pull it off the road if it was hurt... first I just wanted to get back there and see what I'd done. As we're driving I'm saying, "You're not hitting it with a shovel, are you?" "Well, no but I don't want to get me either!" 'We need a lasso... I'll need to drag it off the road!" "We need to see what's going ON first!" "OK..." As I'm whipping the car around like a maniac...

NOTHING. There was nothing!

We drove around a bit, flooded the pastures with the brights, checked the gutters on either side of the road... NOTHING. No blood, no sign of anything...

Then we went home into the floodlights and examined Navvy.

NOTHING. I thought... No damage to the car. Not even a scratch.

Then I saw a teeny bit of fir wedged into a piece of chrome! CRAP! 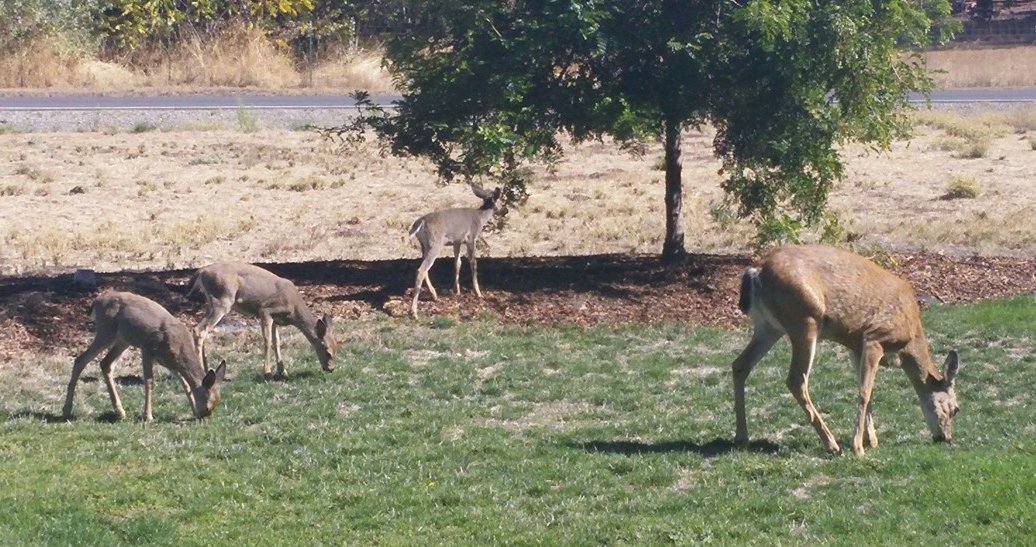 OK here's what I think happened - Because I was going so relatively slowly, instead of 50+, I think the deer had a chance to hesitate before crossing. Then as I swerved he probably pulled back and hopefully I just grazed his butt and hooves trying to kick away.

I'm praying the deer is OK! I hope he's not even limping! I am an animal FREAK. I was a volunteer rescue person for the Humane Society for years and I would have been devastated to think I had hurt one of these amazing, precious, gorgeous creatures that come to take advantage of our watering stop and green grass daily! And many have babies again right now, going in to winter. The death of a mom means a near-sure death of her babies.

Cars blow by our place WAY TOO FAST commuting the scenic highway - it sure can't be scenic when it's going by in a blur, though! We had two deer killed right here in the last year. 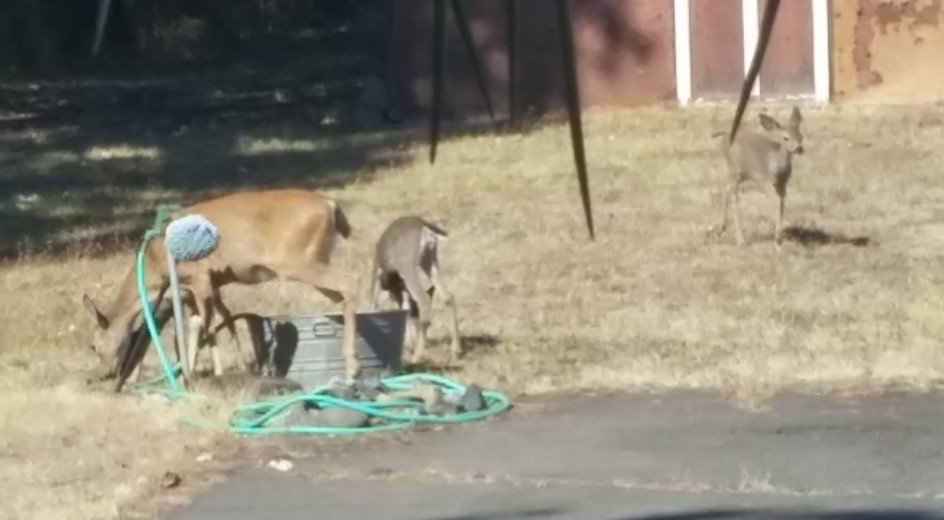 I consider it an absolute miracle that I was going slowly. A MIRACLE! Maybe my Angels were working overtime to keep me calm and moving slow and ALIVE last night.

That couple of miles per hour difference probably saved that deer's life!

Something to keep in mind: Animals don't understand things that don't move as quickly as them, you know. Just because they live near a road, doesn't mean they realize that a car in the distance can get to them in a second. That's why they stand there stupidly - A DEER IN THE HEADLIGHTS - it just isn't within their comprehension, and they also do NOT learn it over time. My partner is convinced there is no reason to believe this deer won't do the same thing tomorrow! DANG IT.

The moral: (Like I'm not obvious) It might pay to chill out a little and not be so busy and pre-occupied that you're disregarding the world around you. A little bit of calm and cautiousness seriously pays off!

Drive carefully, precious people. ;) The life you save could belong to this little angel... or yourself. 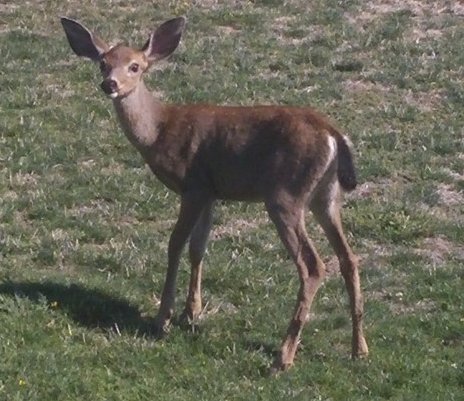 Write something…
Recent messages
chrisyohn Premium
I was driving a minivan on the night of my grandmother's funeral, and I hit 4 deer at once at 65mph, and you wanna know something? Those little pricks ran off like nothing happened and left the grill + bumper in pieces!

Reply Like Like You like this
SupportWorx Premium
@chrisyohn
O.M.G. ARE YOU SERIOUS????? Oh nooooo! HAHAHAHA "THOSE LITTLE PRICKS!" Hey, they may all be limpin' to this day, man! -Alexx

Reply Like Like You like this
chrisyohn Premium
@SupportWorx
Still didn't get my deer meat! LOL It would have been good, honest, unintentionally killed deer meat!

Reply Like Like You like this
Dmorrow Premium
Beautiful pics of some beautiful creatures! I'm glad it seems the deer was O.K. and that your car was O.K. as well.

Reply Like Like You like this
SupportWorx Premium
Strangely, I wasn't a bit concerned for myself but like I said, it was weirdly calm all evening. I am so thankful not to have created e a suffering animal situation. A sick animal virtually stops my world, man! -Alexx

Reply Like Like You like this
krazykat Premium
@SupportWorx
I'm with you on that Alexx. A hurting animal stops my world too!! Even moreso if I felt responsible!

Reply Like Like You like this
TopAchiever Premium
Thanks for making us aware of the precious things in life and the importance of heeding the slower pace of life.

I'm just so thankful that you are still around to tell the story. :-) 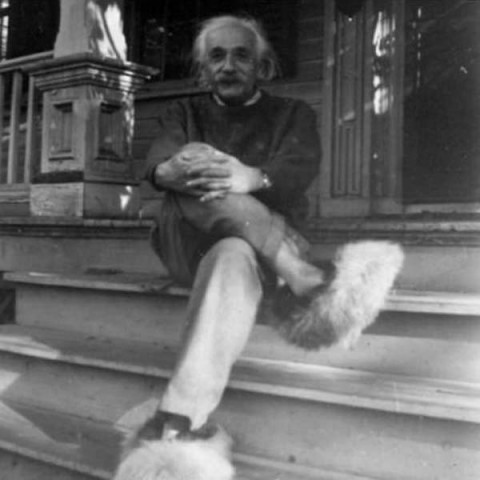