How to seperate yourself from the average and be GREAT!

Ok, first off I want to start by sharing what I learned just last night. It does have to do with horses (and mules) but right after I learned the lesson for the mules, I thought it truly applied to IM as well and could not wait to share it here with everyone.

Now this is my opinion and is a long term goal. Not everyone will want to reach at the same level of success and that is ok. So lets go get started and I will share with you my experience.

We have a mule. Now for those of you who don't know, a mule is half donkey half horse, that is a mule. He is about 16 hands high, (a hand is 4 inches) so he is HUGE. Easily the biggest and strongest animal we have on the property. Not only that, but he also was the most uncontrollable. So you are just asking for disaster.

He recently went to a "mule" trainer. (Although I was completely capable of training him, my mom did not want me doing it myself. You know, moms worry and such.) But I will be keeping him tuned up after he gets back. Now I went and worked with Dexter (the mule) last night and had her teach me what he knows. (Always a good idea just fyi)

Now Clinton Anderson with Downunder Horsemanship is really the foundation of my knowledge. I know that means very little to anyone outside the horse world but let me explain. (And on a side note to those that do know Clinton, I don't stand for everything he does with the horse, but he teaching is some of the best I have found)

So Clinton, he has the #1 program right now because he is so step by step. His teaching is known for being VERY explained and systematic. He goes over every problem you can think of and what to do, both with horse problems and handler problems.

Why do you do that?

Going back to the mule trainer. Before I go forward, I want to say she has done a pretty good job so far with Dexter. I am not saying anything about that. However I do see what I am going to have to do better when Dexter gets home, but it is good because he is going to be a lot more manageable when he does get home.

Now this is what I saw. Mule and horse are different animals, but you do have principles and theories that are universal in the language of Equine. So I learned, for example, that when running the horse around the round pen and to make them change direction, you want them to turn into you for the change before going the other way. All of the trainers I have studied say that. Although all the trainers I have studied are "horse" trainers, this is one of the things that isn't like, "Oh, well they don't need to do this because they are a mule." It is universal.

Dexter's trainer however didn't care which way he turned. And you do want them to turn into you for the change because of respect, and it is the foundation of getting the horse to hook on and come to you. So when I asked why she didn't care, she didn't have an answer. She just said, "I just don't care, I just make them change direction." I will say here, it is the small detail like that, that makes the difference between average and great.

Now I have found a trainer that does turn the horse to the outside, but they teach them that. Why do that teach them that? To be able to better control the horse in the round pen and choose how the horse turns in both directions. Into the fence, and into the middle.

Another example is with "yielding the forequarters." Moving the shoulders away. Again, I have learned when making the shoulders move, lets say to the right, you want the left front foot to cross over and in front of the right front foot. Why? Because if they step behind then can hit themselves in the back of the leg and even step on the back of their other foot and cut themselves.

Know the why, and you get a deeper learning

Dexter's trainer however doesn't pin point that little specific thing. And she doesn't have a reason as to why either. Now if you haven't figured it out by now, I want to know why I am doing something. I do want to learn from Dexter's trainer, however when she doesn't give a reason as to why she does the things she does, for me it is harder to learn. I tribute that trait to my math teacher (For those of you who have gone through my training "How I Write Quality Content"

He always had us tell why it was the answer to something. He believed, (and ran into a lot of people who just memorized) but if you knew the reasons why you were doing something it would be a deeper learning then if you just memorized something.

I want to let everyone know right now that when I asked questions like I do it isn't in an arrogant or "know it all" tone or way. Like a snooty, "Why are you doing that?" But I am trying to learn and expand my knowledge type of "Why."

It hit me when I was going home last night. To really be on top of your game, to really reach a higher level of success, to be one of the greats, you DO need to know what you are doing, and WHY you are doing it that way. I can guarantee that Kyle and Carson know why they do what they do. Not to say that there is not another way, because many roads lead to Rome. However to be GREAT is to know why you are doing what you are doing.

I am always learning. Right now even I have Clinton Andersons No Worries Club quarterly journal beside me as I write this because I am always learning, always wanting to improve, but also know why. Why is it a good idea to know why? Because I have been asked, "Why do you do that? What is the reason you post?" And I could just say, "Because Clinton Anderson says to." Or I could really know the answer and give the reasons why you do those things.

Because if I give them the reasons why, they are more likely to understand the purpose and improve their skills themselves. Not only do they now know why to do it, they would they are more likely to keep doing it, and if you just put all that work into training a horse for them, you want them to keep the horse the best they can after you give it back.

So relating this to Internet Marketing, to know why you create quality content? Why are you driving traffic that certain way? Why did you lay your website out the way you did with content? And a most recent discussion, why are you using links the way you do?

Knowing why does take time. And sometimes in the beginning you are told, that is ok. But to really get great you need to know why you are doing what you are doing.

Even on the show Face Off. The competition of special effects markup artists. It is the details that can really push someone higher up, or be sending them home packing. And even there have been times the contestant has dome something and normally the judges wouldn't like it, but because of the reason why the person did it, it made sense and was the correct choice and got acceptance from.the judges.

So that is what I learned. Hope this gives you insight into refineing your skills.

Write something…
Recent messages
Shields Premium
There are a few ends left untied, probably because your math teacher did not have an English minor. ;-) Like what happened to the humongous mule--was his name Dexter? Did he stomp all over that trainer who wasn't going by Clinton Anderson's rules and run away? I could go on, but you told me at the end that my purpose was to get insight into refining my skills.I love your personality; it makes reading your articles a delightful experience.

And Dexter? He is doing good. I actually got to ride him for the first time that night as well. You can handle him much much better then before. The trainer has been doing good, didn't get ran over no lol.

Dexter is still at the trainers. He is getting prepared even to go to a 3 day clinic at the end of the month as well. That will be fun.

I just got to realize afterwards that I better be on top of my game with what I do and why.

Why in front and not behind? Why post? Why do you pull the rein to the side like that, and not this? As well as what I am doing with IM.

Reply Like Like You like this
lauradews Premium
Great article skyhorse, you give us alot to think about, you can bet I'll be asking myself "why" alot more.

Reply Like Like You like this
skyhorse Premium
Well thank you! I try to always raise the bar for myself with my blogs and trainings. I want to always be better with what I give you guys!

Reply Like Like You like this
AnnieB Premium
Thanks skyhorse, you reminded me that I need to check some more details of my website after transferring it over to my own domain from a siterubix website. So much to do, so little time...:)
(I'm doing a catch up job due to our power outages the past week).

Reply Like Like You like this
georama Premium
You have definitely made us little more wiser for our future directions.Hope with u as a trainer we would b able to add some horse power in our ventures. 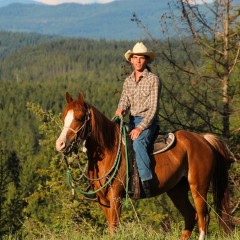