Reciently, I've been reading about some who have bloged about why they have left Wealthy Affiliate or are thinking about leaving.

I've even read comments on other websites from former WA members complaining that WA members are part of a "cult" because the level of interaction among WA members on the platform "is not normal behavior."

( I'm going to discuss more about this "cult" crap in a upcomming blog...)

I don't know these people personally and I really wish them success in whatever they choose to do.

Here's one thing I do know.

I have read that some are unhappy with the amount of money they've made in relation to the time they've spent here at Wealthy Affiliate.

Now, some of you are here with the intent to only make part-time money. That's fine. Some of you signed up with the goal only to supplement what you already have.

I get that. Everyone is NOT the same and everyone's goals are diffrent.

Some have started out on fire and once they REALLY see the amount of work involved and the huge investment in time it takes decided it's just not for them. I get that too. That's fine.

However...Many of you, like myself, are here with the DEFINITE PURPOSE of creating a six or seven figure annual income over the comming years - that's right, I said YEARS.

The following comments are directed to you, dear readers:

This platform is called "Wealthy Affiliate"

Not "Part-Time After the Football Game Affiliate"

Not "Make Some Money When You Feel Like It Affiliate"

Not "I'm Not Really Sure I Want to Do This Affiliate"

Some of you act like you're afraid to go after the "Wealthy" part!

Because if you follow the training with Unwavering Focus you can become wealthy over a reasonable period of time.

Let me ask you this: If you ABSOLUTELY knew in 5 to 7 years, some even less than 5 years, you would create a six to seven figure income if you JUST STAYED FOCUSED, would you leave Wealthy Affiliate?

You wouldn't even think about it!

Yet there are people leaving on a regular basis. There are WA members with hundreds of posts over multiple blogs who are leaving or thinking about QUITTING.

To be honest, you can expect that in any business.

But when you read it yourself, when you see it on a blog post and in the comments and try to process it, you start to wonder Why?

Here is the key point, my friends:

Lets look at the definition of Unwavering Focus?

Unwavering Focus is the ability to maintain clarity about your highest priorities and to take all the energy you've learned to generate for yourself, chanel it into what matters most, and keep it there, regardless of what is going on around you or how you feel. This ability is key to becomming an exceptional performer.

The ONLY way goy GET UNWAVERING FOCUS is through DAILY PERSONAL DEVELOPMENT!

There is NO OTHER WAY.

For example, the above quote on Unwavering Focus was from a book called "Miracle Morning for Millionaires" by Hal Elrod, David Osborn and Honoree Corder.

If I never read the book, I would have never learned to have Unwavering Focus.

When you harness the power of FOCUS, you don't become superhuman, but you can achieve superhuman results. 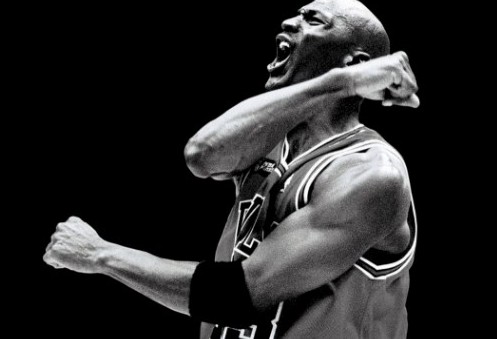 Most of you know who the guy in the above picture is...

I have had this image as my screen saver on my laptops for over 10 years and never changed it.

THIS PICTURE IS ABSOLUTE UNWAVERING FOCUS!

The kind of focus that wins 6 championship rings.

This guy was SO FOUCSED that he made everyone around him BETTER!

Look at the sheer determination on his face! The clenched fists in defiance of failure and mediocrity.

And then I'll beat the crap out of you SOME MORE!

I'm going to end my rant with the words of the late Jim Rohn:

Let me ask you this: Are YOU ALL IN?

Leave your comments below and let your fellow WA members know how you feel about this.

Now I'm off to fail forward some more, then beat the crap out of my failures!

Write something…
Recent messages
Nancy29 Premium
Hi Howard,
I can’t wait to read your post on cults, so I’m following you to make sure I don’t miss it! This was such a fun read. I think you brought up a subject that gets glossed over most of the time; some people’s fear of success and making too much money. It’s a real fear, and may account for why some WA members pack up and move on.
Best,
Nancy

Reply Like Like You like this
FlorencioQ Premium
Wow! talk about a motivational speech. I love your post and will bookmark it for future motivation. One of the best posts I've ever read here. Thank you Howard!