I began this blog last year, and had problems with picture uploads, so put it on the back shelf.

After the training tonight with Jay, I was encouraged to clean up some of my drafts and finish the blog. I'm getting much picture at the pictures so, we'll see.

August 13th, I left this world, and my Mom, Barbara.

Since then, Mom hasn't been the same. She's been stuck in inertia of inactivity, and lack of goals. Time for a change.

When Barb joined WA, 3 years ago, she found an amazing network of wonderful people and started following the training and suggestions of this family.

One of the best tips was from Alex, on writing. "Just write daily!"

Mom took his suggestion, and wrote 21 blogs in 21 days!

Another suggestion, from "I Remember Momma". ...Write what you know about, straight from your heart.

Those suggestions worked then, so Mom, ...try it again!

Write about ME! You"ve had a book whirling around, since Grandma passed way in 2013! Time to put some action into your dreams!

I hope to encourage Mom, by having her be my "ghost writer" as I could sing and dance, but never learned to write. I've been telling her to start somewhere, even if it's short and sweet, but write something, everyday!

Thank you, Michi! I heard you loud and clear, so here's a little tale about

"My Girl" Michi, the singing Malti-Poo!

Michi and I started our journey together back in December 23, of 2008, a gift from my later to be ex-husband in 2012. Having just retired from teaching, I was free to take Michi with me wherever I went, and "Oh! The Places we've gone and the people we've seen!!"

Enter teenage stepson! While living with mom, who worked, he wouldn't attend school.

Let's just have him live with us! Bad idea!

Now living with us, he still wouldn't go to school and do anything I asked. Soon he was beginning the same behavior! ...progressing to worse!

Imagine me, the teacher, having that living with this! Maddening!
He was i Spec Ed classes, but NOT mine!

He stole my watch which was a present, and a new well hidden DC player!

Dad just replaced them for me! He never made him comply, and blamed any disagreement on me.

Finally, after several very bad scenes, he went back to his mom's, where she simply went on-line and procured a high diploma, just as she had for her daughter. Geez...

Mom had moved back to Michigan from California, so began our trips north from Texas! 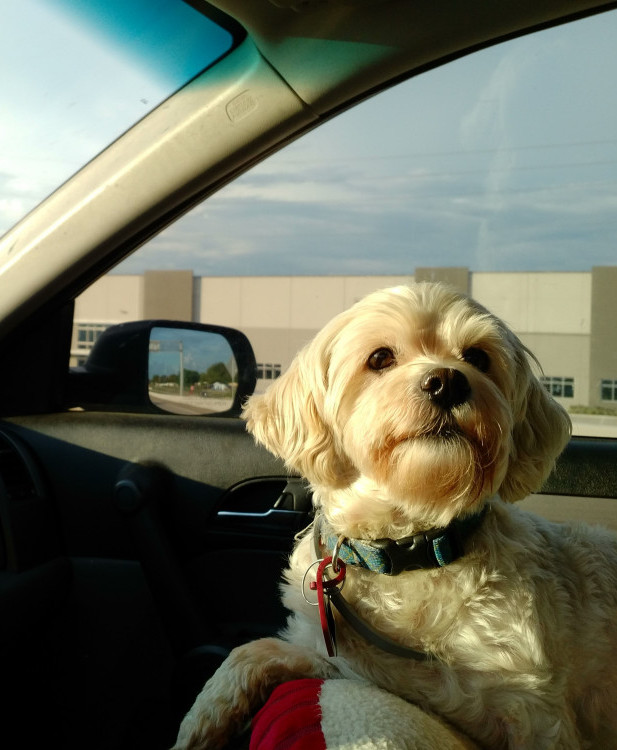 Whenever I started packing, Michi was right there. Action pack trunk, always meant a long roadtrip.

Michi sat atop my red "office" suitcase, and her matching red bed. She usually slept on the road, but when she wanted, she could take in the view!

Mom took me through my last couple of years of that marriage!

Racing around to pickup, before the realtor was to show her house, she tripped over her Bose radio, which was her news connection. No TV in her house! I tried once, and she refused.
The fall, began her demise and also or monthly trips back to help.

Once, I opened the back door, Mich would run right to the sitting room and jump on the couch to say, "We're here!"

Eventually, Mom went to a full care facility, that was dog friendly!

Now, when we got off the elevator, I let go of her leash, and she'd make a beeline to Mom's room, jumped on couch or bed, to again say, "We're here!"

When Mom passed away, Michi was bewildered, when we went to Mom's house.

No good smells from the kitchen, and nobody on the couch, made my Michi sad, as I was.
With Mom gone, travel to Michigan was out for awhile. 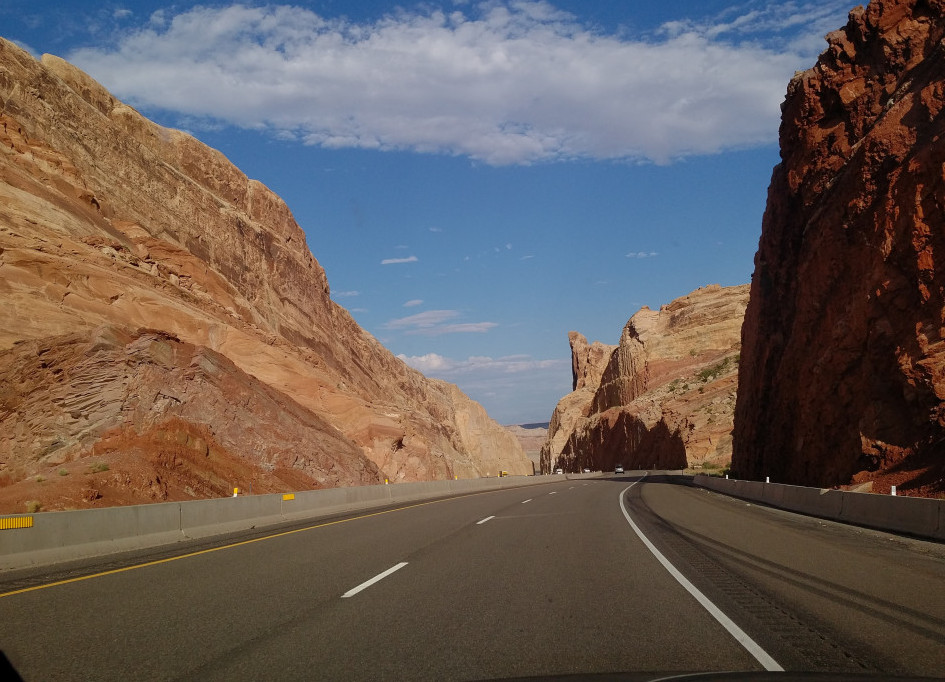 Michi and I traveled up through Lubbock to I-40 or Amarillo, for Rte 66, depending on my mood.

Traveled to and through many states from Texas to Arizona, up to Montana and back through Washington, Oregon and down to SanDiego!

Headed to Carmel for cousin's wedding, and then on to Michigan once, through Las Vegas, and on to Colorado, Nebraska...

Many wonderful hours with my special pal. 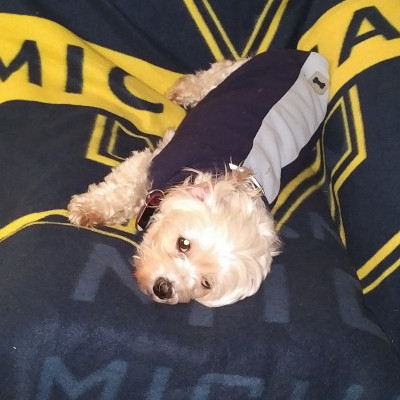 October 2017, while in my condo, a needing something to work on, I ran into WA!

The rest is history!

After 2 years of hassles, when I wasn't up there, I had to sell it, but WA began to take root!

2018, we finally closed, on a less than fair realty deal. That's fodder for another story.

4 Deaths in one year, ...My son's dog, Olive, right at the onset on pandemic, Michi, in August, sons's dad, October, actually today is the anniversary, and my step-mother, in December.

I needed an attitude adjustment!! 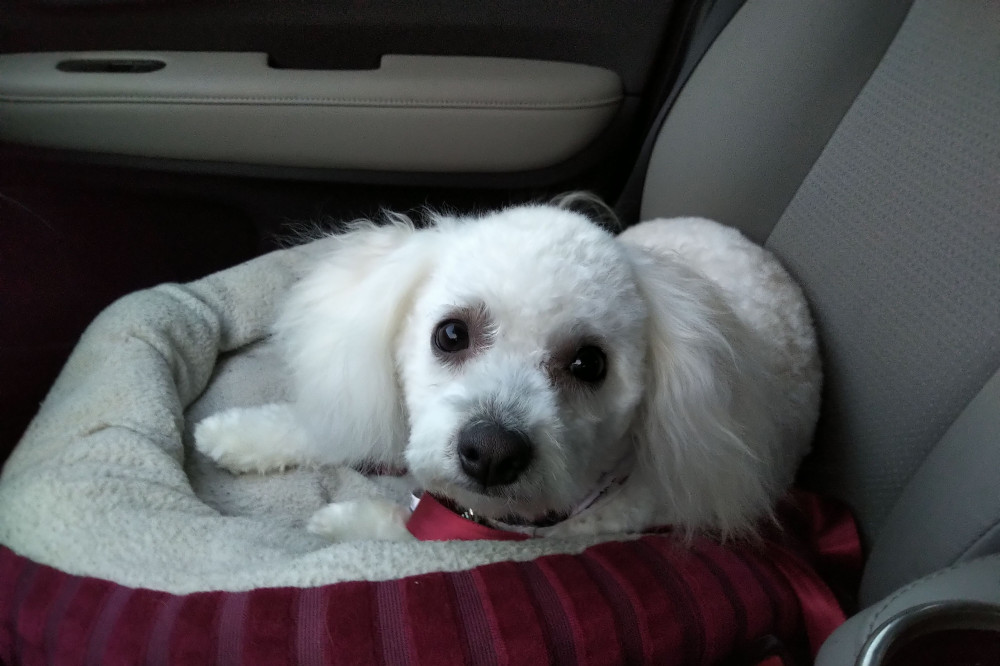 Once, again, I bought my Christmas gift!

She has years and miles to go, to catch up to all the states Michi visited!

My BFF, Suzanne, instantly fell in love, and 3 days later we were going to get Gracie.

She did go to Michigan, last July for my Band/Orchestra reunion, via Louisiana, and up through Mississippi, over to Alabama and the rest of the way to Michigan!

...Louisana trips with Suzanne and Gracie, too!

Well, I hope you enjoyed my memories of "My Girl" Michi and Ginger, "She's My Girl", now, for as long as I'm blessed to have her!

GinGin and her best friend, Gracie!

Personal victory for this blog? Attaching videos and pictures! They are not the best quality as it's hard to dance and hold camera!

"I've got sunshine on a rainy day

Thanks all for stopping by! Always nice to have visitors at my Sandbox!

Write something…
Recent messages
JeffreyBrown Premium
Very nice, indeed, Barb! Aside from the fact that I don't travel much, we are a LOT alike in our situations! I'm glad you got a new Blog Dog to replace your dearest Michi!

Take care of yourself, retain your motivation and keep moving forward! That's definitely what I try to do! I'm also glad you made it through the losses you've experienced! My condolences, of course!

Each new day is a gift! We must make the best of the present!

Reply Like Like You like this
brichnow21 Premium Plus
@JeffreyBrown
Yes, Jeff!
Everyday is a new, clean slate!
I chuckled, when I read about your woes. Why? I could relate to your pain!
With each day, we get a do-over.
We can laugh, later, when we're done with the mess.
Continue being patient, and try to never go to their level.
With that ex, he would try to engage, but I wouldn't go there. I developed "acceptance", which is a strong tool, for the things I cannot change.
We encourage each other.
Thanks for stopping by, Bro!
Make it a beautiful day!
Barb

I will do my best to make this day the best one yet, Barb!

Reply Like Like You like this
EHR Premium Plus
Something about a dog that adds so, much. Sorry for those rough years. I hope the following years are peace filled for you. Gene

Reply Like Like You like this
brichnow21 Premium Plus
@EHR
Gene, that would really be nice, but to each life, some rain must fall.
Please, let's not make it a hurricane!
Thank you for swinging by!
Barb

Reply Like Like You like this
Newme202 Premium
Barb, I'm so glad that you're ok. You've been through a lot in such a short space of time
Gin Gin is such a comfort to you
You are both lucky to have found each other

Reply Like Like You like this
brichnow21 Premium Plus
@Newme202
Yes, Simone!
As Michi came when I needed her most, so was GinGin placed in my life!
Support of friends, 4 legged or 2 is one of life's most precious gems!
Have a beautiful day, Simone!
Barb

And now you can make new road trip stories with GinGin.

Reply Like Like You like this
brichnow21 Premium Plus
@1Rudy1
Rudy, every trip's destination was the friend at the end!
Here we don't have to get in our cars, but we can travel, none the less, right in our minds!
WA folks are all over the world, so we travel daily, when we stay connected.
Thank you, Rudy for your steadfast encouragement.
Barb

Reply Like Like You like this
1Rudy1 Premium
@brichnow21
You're welcome, Barb!
I love a good road trip, though. Going to drive up to Alaska from WA state (the other WA) next year.

Reply Like Like You like this
brichnow21 Premium Plus
@1Rudy1
I always wanted to visit Montana, since the movie Legends of the Fall!
I had a friend from high school who had moved there, right after graduation!
After reconnecting with FB, I thought, I will go visit, Kathy!
July 4th, we were at Glacier National Park! I have some pretty funny pictures of her driving on probably the worse day possible!
I was her first visitor in 40 years!
She has since passed away and I'm so grateful for that visit!
I knocked off the NW corner, but still would love to see Alaska!
Thank you Rudy!
Barb

Reply Like Like You like this
1Rudy1 Premium
@brichnow21
You're welcome..
That's a great story, one that stays with you. Glad you had the chance to go visit!

Yeah, I have two major driving goals for 2022...Alaska in early summer, and new England in the fall.

Reply Like Like You like this
brichnow21 Premium Plus
@1Rudy1
I'm aiming for New England as well!
I been to NY, Massachusetts, but not New Jersey or the others!
S and N Dakota... They've never been, on the way! LOL
I love road-trips for the freedom!
Loose plans and my time table, are what I prefer. Rudy!
Keeping it simple!!
B

I've been to New Hampshire/South Maine, but that was a destination I flew to for a reunion.

"Never been to Spain, but I've been to Oklahoma..".grin.

A friend and I drove from Seattle to Taos, NM, then came back via Los Angeles. That was fun, if you count the hours I drove in the snow...who knew there would be so much snow at the end of March/early April...

Made the trip from Los Angeles to Millington, TN, and back.
Yep, I'll take the road any day...

Reply Like Like You like this
Zoopie Premium
You have a really nice writing style Barb, and prolific. I am getting worried now. I might have to reneg on no posts today.lol.
Good to see you still have your ghost writer looking over your shoulder.
OK, you have today only, no posts from me. Lol
Stevoi

Reply Like Like You like this
brichnow21 Premium Plus
@Zoopie
Thanks for the critique, Stephen!
Somewhere, I got the idea that 1000 words is a good number for posts, so that is my goal for each.
I only do a shout it, when frustrated! LOL
I'm getting my groove back, where writing is a Want to, not a Have to.
That is the biggest prize! The power of momentum.
Winner gets bragging rights, so who cares about the outcome? It's the journey that matters, aye?
Later, Stevie!
Barb

Reply Like Like You like this
Zoopie Premium
@brichnow21
I’m the same, I think how many words do I really want to read, even if it’s interesting. We just don’t have time these days. Video and infographics work for me too.
Stevoi. 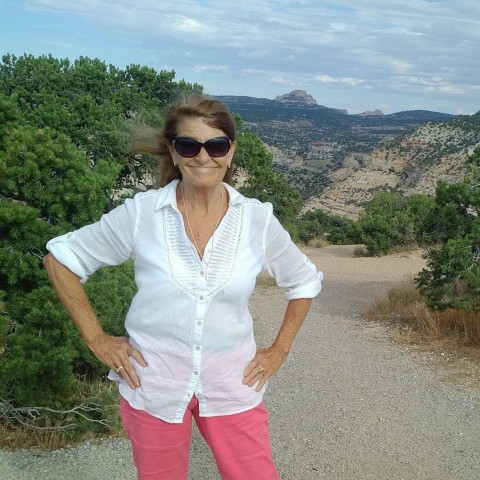