Nik Wallenda in my backyard...Inspirational!

Last Update: June 16, 2012
Well, not exactly in MY backyard.
I live in Western NY, right outside Buffalo. We tend to feel we "own" Niagara Falls (and by the way, NY has done a terrible job the past 20 years of allowing our side of the falls to deteriorate while the Canadian side blossoms...anyway...). Nik Wallenda has been in my neck of the woods practicing for his historic stunt the past few weeks in front of the Seneca Niagara Casino. Our local news has been covering it and building the hype. It has been exciting to watch to say the least.
Last night, the culmination, was more then one could hope for in terms of excitement. To see a man conquer fear anyone else would deem unimaginable. To watch and see him communicate with his father and TV hosts via an earpiece so effortlessly, as if he were on a walk in the park discussing the changing weather conditions that suddenly changed to gusty wind and rain (never mind he is on a 2 inch wire precariously perched above the mighty Niagara).
The harness he wore was forced by the sponsors, who didn't want their brand forever associated with the man who "fell to his death" over Niagara. Come to find out he didn't need it. He never faltered, and sprinted at the end to the waiting arms of family and friends on the Cnadian side.
His words that impressed me most were when he was in the middle of his journey, thanking God and Jesus for their grace and mercy. He wasn't desperate in his speak, merely thankful for this once in a lifetime opportunity. When asked the purpose of his trip to Canada when he reached the other side, Wallenda replied "to inspire people around the world."
I am inspired!

Write something…
Recent messages
jatdebeaune Premium
Sure worked on me. I feel inspired. Would love to have seen that event. Is it on YouTube?

Reply Like Like You like this
jaymekl Premium
Amazing the fears people can overcome when in service to others. I wonder if he feels the fear anymore?

Reply Like Like You like this
Amy Farr Premium
He is a humble man. He already has plans to walk the GRAND CANYON. He has the permits so it's a "go"! I think he doesn't have the fear anymore.
His repetition in interviews of reaching for your dreams, never giving up, is something to be admired. His stunts certainly inspire many to reach for goals on the premise "if he can walk a wire over Niagara Falls...I can (fill in the blank)"

Reply Like Like You like this
Labman Premium Plus
I almost drove over there last night. Didn't think I'd make it back for the WAbby if I did. 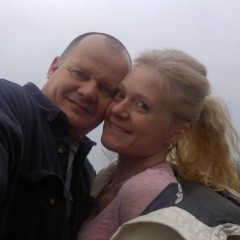