I wanted to give a quick word of warning.

Many people have been reporting that this guy, Olufemi Ayodeji (see the Facebook profile below) has been scamming $1,000's or even $10,000's from some individuals.

"IC3 Department of the FBI reports this person to has take approximately $300,000 from unsuspecting parties online." 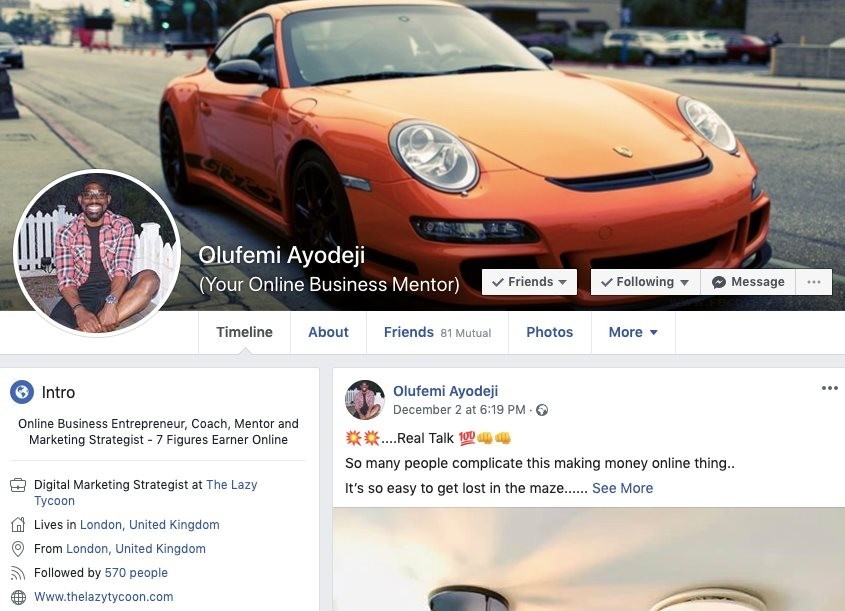 I was extremely surprised about this because that person had also contacted me on Facebook earlier this year. We chatted for a while and talked about meeting up when I was visiting in London...

He seemed like a friendly person but numerous people have reported that he's a scammer. Anyways, I never met this guy nor called with him nor gave him any money.

But It Seems I Was Wrong...

But take a look below what other people are saying,

1. "ANYONE who has been scammed by Olufemi Ayodeji, it NEEDS TO STOP. He's a professional scammer. Message back here if anyone scammed is interested in getting your money back from this con artist. I had the SAME THING happen to me for $17,000!!! He gives you loads of value, hours and hours of time, gains your trust, tells you to sign up for whatever program he's usually promoting, pay him for his coaching or traffic, and then disappears. In fact, there is an open Federal Case against him with a large group involved...

To my understanding there are extensive records showing at least 14 People accounting for well over 100's of thousands of dollars gone. Fear not Olufemi Ayodeji, your predatory ways are numbered rest assured. Contact me if you wish to be involved in this upcoming case as you may be entitled to a settlement if the government forces him to repay victims. Anyone curious who this Olu person is and would like to hear lies and have your money taken.."

2. "He scammed me said he was sick wow and disappeared.

3. "You will be offered private coaching along with promises of making money online connected with other affiliate opportunities, but once your money is gone, so is he..." 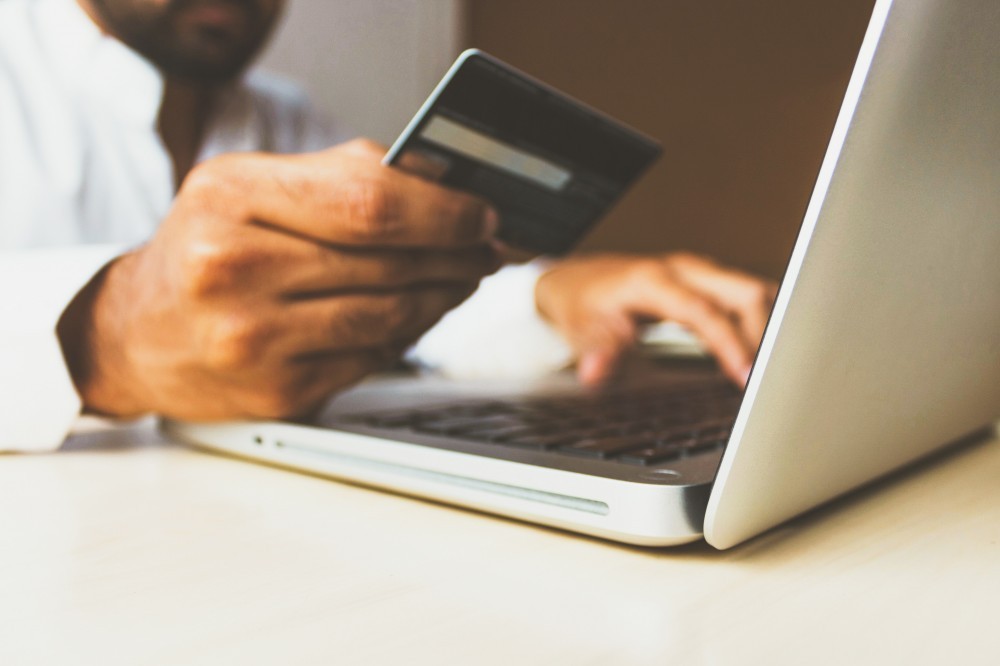 4. "I have spoken extensively to one of our members who has lost 1000’s to this guy. In turn, that member has reached out in a Facebook group associated with the affiliate program this guy promotes and multiple people have also come forward having lost similar amounts to him."

5. "If a "MENTOR" seems too good to be true they probably are!!! SCAMMER ALERT!!! If you are approached by this man I would tread lightly, he seems immensely friendly, kind and will give you great value on the front side, but BE AWARE, this man is a WELL KNOWN INTERNATIONAL SCAMMER that has gotten people to the tune of Well of 250K.

FBI unit's IC3, as well as the FTC is well aware of this man. Take a look at just 3 of the messages from essential strangers I asked about him within the industry... Seems most of the industry has been well aware of his game long before I got played. Olufemi Ayodeji is on the Feds radar and has an open file on him so I would suggest you use caution when spending your time or hard earned money with this person! Got me to the tune of nearly 10K and Others FAR MORE...

He gives you plenty of uprfront advice, even loves Biblical analogies, but after you pay... He's gone, all the while still telling you MONTHS later that you're traffic is on the way... I reported this issue to Power Leads Systems Owners who seemed to be aware of this situation and in fact told me they had refunded someone's money already regarding it. When I asked for my money back they initially said they'd give it to me and would even take it out of his commissions. One week later they changed their minds and offered me a free lifetime membership but would NOT terminate his affiliate status or account... No matter, if you've been conned by someone like this or even him directly... People like this will ALWAYS get what they GIVE, so don't let it Hold you down. I know I haven't!!!"

6. "Olu is a Scammer. He seems to be genuine but after he receives your money he disappear on you."

What Can We Learn From This?

1. If a random person contacts you (on Facebook or another platform) and asks, "How's your business going?" be careful. Most of the time they're trying to sell you something.

I'm quite active on Facebook and every single time when random people have asked me directly, "How is your business?" They've just been trying to sell.

I've never bought anything through that avenue.

2. Even though someone seems trustworthy online, you still need to be careful.

As the old saying goes, "Better to be safe than sorry!"

I guess that those people who have lost $1,000's to this Olufemi guy wish now that they would have followed that old wisdom.

In the past, I have talked with some people who seemed like trustworthy Internet marketers but I felt there was something wrong. They were selling me Digital Altitude program.

I said them that the program seems like a pyramid scheme more than a legitimate business. They promised that there's nothing sketchy and once I refused to take their offers, they became mad and started calling me names.

=> If it feels a little bit sketcy, trust your gut feeling! Better to be safe than sorry. 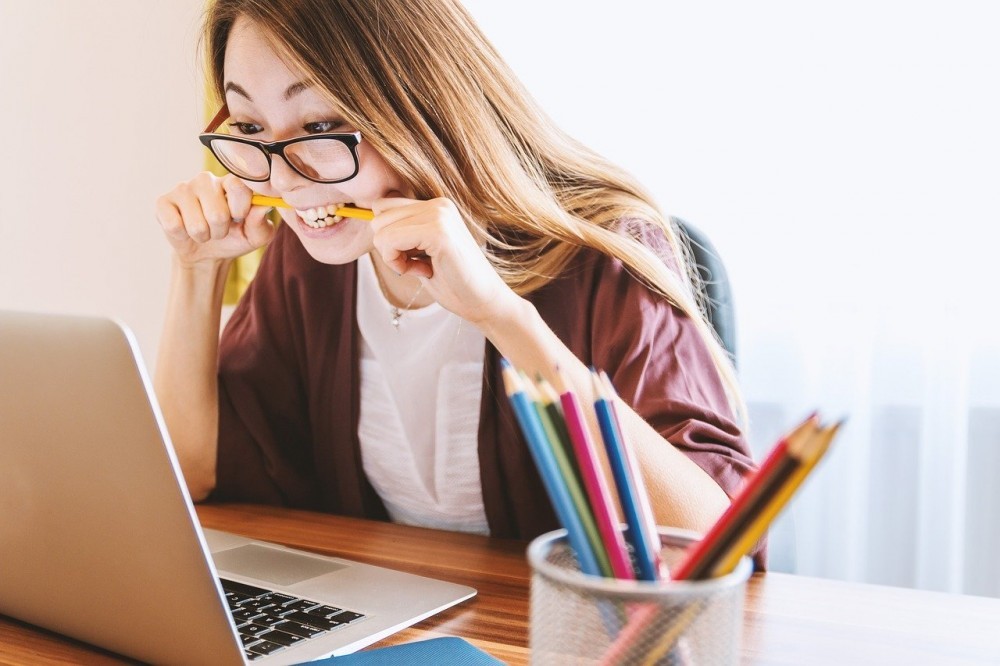 3. If someone gives you big promises, be super careful.

It's true that sometimes in life there may be opportunities that are simply phenomenal. But in 99% of the cases if something seems too good to be true, it's a scam.

- Ask from others who have tried the program.

- Double-check the background of the founders.

Personally, when I research a product / program or take a sales call, I usually promise to myself beforehand that no matter how good the offer would sound, I will NOT buy anything right away.

I'll rather sleep a night or two and see if that offer is really as good as it sounds.

This has helped that I have never been scammed online.

- Roope "Better to be safe than " Kiuttu

Have you been contacted by strangers on Facebook asking "How's your business going?"

Have they always been trying to sell you something?

Let's discuss in the comments below!

Write something…
Recent messages
allancurtis Premium
The lines that are used to pitch you are many ... in fact there are courses out there "at a cost" that will supposedly teach you how to pitch and overcome objections successfully!

My rule is ... if I did not seek out the opportunity ... I am not interested ... the number of people with a "blocked" status on my Facebook account, is nearly as many as those being "Followed"

Remember ... you are in control .. you do not have to accept any invitations or respond to any messages ... simply ignore, block or delete those which seem questionable ...

Reply Like Like You like this
CynPhill22 Premium
I was scammed last year, not by this guy but one with the same kind of trust-building plan. He got me for 2 grand and for someone living on half that per year it really put the hurt on me. If anyone constantly contacts you, email, text calls persistently it is not in your interest. You are also right about your gut feeling, I should have gone out to eat! I did not know that the bank would release money on a check in three days, even if the check is no good (insufficient). They changed that law. I seem to learn the hard way.

Thank you for the warning Roope, it's amazing what some people do for money, it is totally wrong and immoral! There are plenty of honest ways to make money, without scamming people out of their hard-earned money.

I've never been scammed in this way, however, a do have many calls from so-called "Google AdWords experts" trying to scam me into buying an AdWords campaign. Many tradespeople seem to fall for this, thankfully I am able to do my own campaigns for my off-line business.

Wishing you all the best Roope.

Reply Like Like You like this
Anne68 Premium
What a way to make money by stealing from others. Not the same I know, but today I found someone had used my Barclaycard credit card account to spend £353 at a toy store in UK. I'll get my money back, so I suppose the thief thinks it's a victimless crime, but someone has to pay - initially the bank, but then the customers in additional bank charges. Check your accounts regularly at this time of year when we are so busy with Christmas buying. Probably the thieves think you won't check till January.

Reply Like Like You like this
jetrbby80316 Premium
Thanks Roope, but this doesn't surprise me. There are all kinds of predatory behavior going on in Facebook, and its easy to get caught off guard - even for savvy people.

The nicest most helpful people on social media often are the professional scammers. One of the reasons I seldom engage on Facebook, and certainly don't do messaging. Good you blew 'em off.