My daughter had her Yellow Lab put down today. He was, give or take a few days, twelve years old. Always a strong, healthy fellow, he survived cancer surgery five or six years ago. But, in the past year or so, his heart grew weaker, and that caused a weakening of the legs. 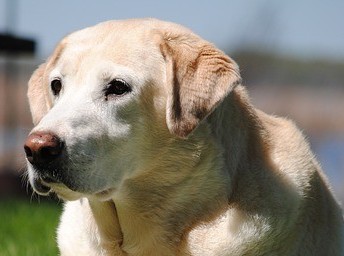 Thanks to a very caring vet with some excellent ideas on how make Dirk more comfortable, his quality of life was improved. He was able to squeeze in six more months of joyful living.

Over the weekend, however, he became unable to lift himself up from a seated position. Floors can be slippery, so my daughter took him out in the grass to see if traction was the issue.

Sadly, it wasn’t. Unless someone put their arms around his midsection and gave him an assist, he just couldn’t get himself up on all four paws. Once up, standing and walking was a terrible struggle.

Now, we’re left with lots of great pictures, and wonderful memories of Dirkie. I have to admit though, sometimes I was not his greatest fan.

There were times when I would place a loaf of fresh-baked bread on the kitchen island and step into another part of the house to work. During the summer, I’d leave the kitchen door open. On more than one occasion, I’d hear thumping and rush into the kitchen in time to see Dirk happily loping out the door and the remains of my bread in crumbles on the floor. 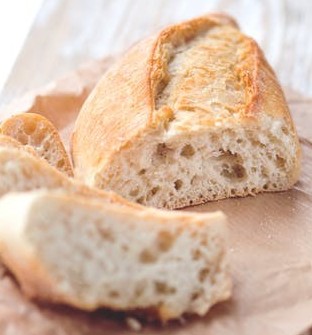 I was always certain that I had placed it in a way that would prevent him from reaching it. Each time he proved his skills and abilities in securing his sought-after treat. He was also a great apple thief.

Leaving apples on low tables or counters was an open invitation to Dirk. Always ready for a snack, unattended food was always in peril when Dirk was around.

I finally learned to put the bread in the pantry to cool, and started buying a couple of extra apples. It ensured we had enough for lunches, and Dirk could enjoy his apple heists.

He had a great taste for bananas--peels and all, and butter too. Once, my daughter started unpacking supplies for a 4-H cooking class she was teaching and discovered all but one stick of butter was missing.

One of the other moms saved the lesson by running out to the local convenience store for morebutter. When she returned home, my daughter found Dirk in one of his favorite spots gorged on butter and incriminating wrappers lying nearby.

A big puff-ball of yellow lab hair, he had a real trickster personality. He seemed to know when rubbing against an outfit would cause the most aggravation and distress. It seemed like the darker my outfit, the longer he would linger, placing just the right size swath of hair on a skirt or pant leg.

Most of Dirk’s life was spent protecting our three-acre hobby farm in California. Along with our other lab, he would put unexpected, or unknown, visitors that arrived at our gate on notice. His techniques were very effective. After getting to know our delivery men, they would confide that they would never consider challenging Dirk.

For a time, we raised goats. It was often necessary to check on a baby goat or it’s mama in the middle of the night. On moonless nights, Dirk would safely guide my daughter across a large open space between the house and the barn. If a wandering coyote happened to be passing by, he made sure it kept a respectful distance as it continued on it’s journey.

Dirk was a big, powerful guy that loved children, never harmed any of the livestock, and delighted in teaming up with our beagle to track down and dig rabbits out of their holes. Life without him won’t be the same, and we’ll all be a little poorer for his absence.

Write something…
Recent messages
Mick18 Premium
Sorry to hear about Dirk. They are members of our family. I've looked at mine as my four legged children. So hard when we lose them. I wish their lifespan was longer.

Reply Like Like You like this
FKelso Premium Plus
It's so hard to lose a four-legged family member. They are more than just "pets". They are creatures that we love and cherish. It is good that you are focusing on all the wonderful memories you have, as that is the way to keep him alive in your heart. May your grieving process bring you closure.

Reply Like Like You like this
Nancy29 Premium
@FKelso
It's true, he was much more than a pet. His greatest gift to us was the sense of safety he provided. We lived in an area with lots of wild animals, and an occasional human, who would have made life more challenging if he hadn't been there. Thanks for taking the time to respond.

Reply Like Like You like this
RAFStuart Premium
It is so hard when you lose a pet, they are not only part of the family, but really family.
Stuart

Reply Like Like You like this
Nancy29 Premium
@RAFStuart
He truly was a family member. A cheerful, happy-go-lucky, member of the family. Thanks for taking the time to write, Stuart.

Reply Like Like You like this
Wayne1950 Premium
I know how hard it is to lose a pet like that.
We have had to put down three dogs in the past two years.
They have replaced a couple and we're back to six dogs.
Sorry to hear about this our chocolate lab has the hip problem common to them.
Not sure how much longer he is going to last some days he drags his leg and it takes a while for him to get up.
Rember the good times with Dirk. Sorry for the loss Wayne