Hello affiliate marketers, I'm happy to tell everyone within the community here that I've just published my 100th training today and more of these are going to be published in the coming days, weeks, months, and years ahead. congratulations to everyone out there on making it to the WA community!

It's been almost a year now since I became part of this vibrant community and it's been months of pleasant blogging experience leveraging the best and most integrated online marketing tools in the affiliate marketing industry.

As a matter of fact, WA has all the tools and resources needed by affiliate marketers of all levels to build a successful online empire and virtual real estate. Even when it comes to using "Akismet" to prevent spam comments from flooding your site, WA now has you covered. You don't need such plugins anymore.

It's quite encouraging to see the community wax stronger and stronger every day. In the last one year, a lot of amazing features and revenue opportunities have been added such as the Site Comment 2.0 tool, free Site Privacy for the free starter membership and all of that.

Recently, Kyle wrote me through a PM channel and made it known to me that more awesome features will be added in the coming days, weeks, and months ahead. He further said Full-Time Revenue Opportunities will be given directly within WA. Congratulations, WA members! See the screenshot below. It will shock you. 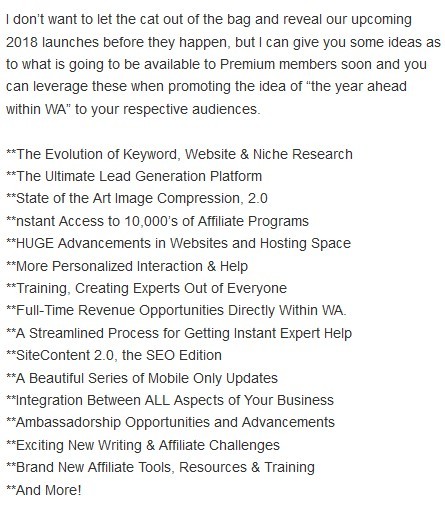 WA is known to be the most trusted, most integrated, most popular, most active, and the best affiliate marketing community in the online world. It's grown at a pace faster than the industry and has got over 1.4 million active members from all parts of the world.

WA has hundreds of trainers from all over the world who passionately create training tutorials, videos and courses regularly for other community members, newbie and struggling veteran bloggers to learn more about blogging and how they can become more assertive in the online world. Most of the training courses teach how to positively assert views and commit to it while lots of others unveil several content marketing tools that bloggers can leverage to improve their blogs through amazing content ideas.

My History in Summary

About 13 years ago - exactly when WA started out, I got touched to venture into affiliate marketing. I made a move by joining an affiliate marketing platform which has now faded away from the web space and paid a sum of $94.50 which covered the cost of buying a domain, a web hosting package and some disgusting promotional tools.

I regretfully wasted a year posting articles without having the knowledge of keyword tools at all and, so, couldn't rank my posts untill my domain expired. This bitter experience made me determine never to go back into online marketing, whereas, this was the same year WA was launched but was completely out of my knowledge.

In October 2017, I learned about WA in a forum posting platform where I was getting paid to post threads, replies and blog comments and decided to give it a try in earnest. I eventually joined within the same month and upgraded the following day.

When the month ended, I couldn't pay my subscription because I was completely broke. Several web deletion warnings were emailed to me by Kyle but to no avail. Because I couldn't pay on time, my account went deactivated which saddened my heart the more. Because I was able to foresee my future blogging accomplishments through this community, I managed to raise another fund and joined again in December 2017. I then started my blogging journey all over again.

Now, I've been a premium member of WA since last December building my personal blog, engaging my audience as well as creating training passionately for the community. And today now, I've been able to publish 100 training courses with an ambassadorship rank 8.

Get Paid to Train at WA

As part of the awesome revenue opportunities within this community, I'm pleased to announce that anyone can get paid to train at WA.

The kind of revenue you can earn as a trainer at WA is briefly explained as follows:

Though I've once read a post in this community whereby someone mentioned that the opportunity ceases at level 5, this wasn't true at all as I personally heard and confirmed from the horse's mouth (Kyle). Kyle said the opportunity never ends. See the screenshot below. 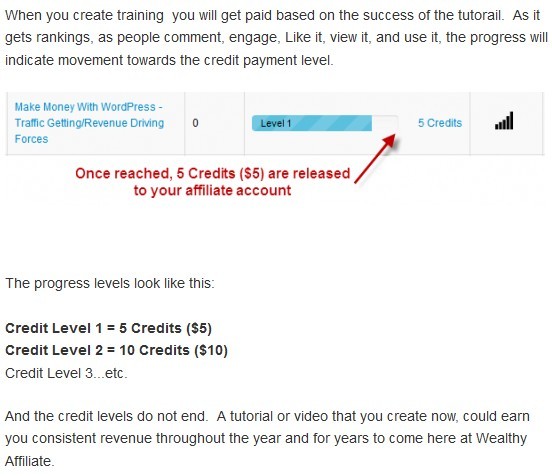 As you've seen in the image above, it was confirmed from Kyle's post directly that the credit levels never end.

Among others, an excellent blog commenting revenue opportunity has also been launched within the WA community, though this is not yet known to so many members, I'm 100% sure of this. This was officially announced by Carson on 5th October 2018.

Aside from earning revenue through the Site Comment 2.0 platform, you also have the opportunity to get comment boost which automatically adds you to a priority queue within a 24-hour period once you've successfully offered 10 comments within this period. As you receive comments and respond, you'll improve your PageRank.

Are you scared of taking advantage of the comment boost thinking it may cause implications for your ranking? I've read some posts in this community where members encouraged others not to approve all the comments once claiming that this may have ranking implications.

Oh, I'm happy to encourage everyone to stop insinuating about the comment boost as it has no ranking implication whatsoever. I wrote Kyle personally about this and he replied accordingly. See his response in the image below. 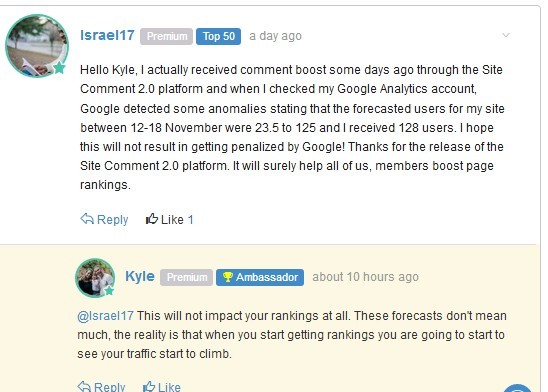 Shortly after I started taking the comment boost, I received the message above in Google Analytics for a blog I recently created here at WA stating that some anomalies were detected by Google as the forecasted users for that site between 12-18 November were 23.5 - 125 but I received 128 instead which was more than the expected forecasts. Though I didn't panic about this, I intentionally asked Kyle so as to free other members who have been insinuating about suspicion or certain ranking implications.

If you have any question about the Site Comment 2.0 platform, or need a hand with anything going forward in your business, don't hesitate to ask me and I'd be more than happy to respond in earnest.

Write something…
Recent messages
BElliott56 Premium
Wow that is very encouraging. Maybe more people will stay.All I know is I'm here for the long haul.

Reply Like Like You like this
Israel17 Premium
@BElliott56
Thanks for stopping by, BElliott56! Kudos to you! You're very correct that a lot of people who would have determined to quit will no longer go as there are lots of revenue opportunities launched here at WA for the premium members to be able to pay subscriptions monthly and still have some extra revenue to make a living. Thanks for the passion!

You may also go through any of the following resources at your leisure. They provide useful blogging tips to become successful online. How to Convert Leads into Customers What is Quality Content for SEO? Tactics For Building Readership - Part Two Basics of Blogging for Beginners Get Paid to Post Comments Israel Olatunji

Reply Like Like You like this
Israel17 Premium
@qrwizard
Kudos to you, qrwizard! Congrats on making it to the top 100 membership in this great community! This shows how much you've been committed, dedicated as well as helpful to other members in the community. You're indeed an awesome member of the WA community and are much appreciated! Please, keep it up! See you at the top soon!

Reply Like Like You like this
qrwizard Premium
@Israel17
This is awesome, Israel. This kind of feedback is heart-warming and encouraging me to keep on working harder.
Let's keep in touch.

Reply Like Like You like this
Israel17 Premium
@JerryMcCoy
Hello Jerry, thanks for your comment! Kudos for the reading! You've been consistently observing the normal blogging routines and this will make your blog skyrocket soon in search results. Success is guaranteed so far you're willing to continue working hard, being consistent as well as being persistent. Congrats on making it to the top 100 membership at WA! Looking forward to more accomplishments soon!

Thanks so much for all your sharing & generosity --- all the best for a wonderful holiday season, cheerio ... 😊

Reply Like Like You like this
Israel17 Premium
@keishalina
Thanks for stopping by, keishalina9! Much grateful! Yes, hard work, consistency, and persistence really pay off. I learned this personally and found it to be true, my friend! Thanks for your visits and reading! See you at the top soon in the online world! Congratulations on making it to the top 50 membership in this vibrant community!

Reply Like Like You like this
Israel17 Premium
@ExpatMark
Thanks for congratulating and celebrating me on this accomplishment, MThompson3! Much grateful! Wish you much success in your online endeavors! See you at the top soon!

Reply Like Like You like this
Israel17 Premium
@Bridge007
Much welcome, Bridge007! Thanks for stopping by! Kudos! Getting to the top of the online world is easy with a few strategies readily implemented. Wish you success in a hundred folds! Looking forward to seeing more of your accomplishments in the online world, friend!

You may also go through any of the following resources at your leisure. They provide useful blogging tips to become successful online. How to Increase Alexa Ranking How to Convert Leads into Customers What is Quality Content for SEO? Tactics For Building Readership - Part Two Basics of Blogging for Beginners Get Paid to Post Comments Israel Olatunji