Quick Ways To Do Manual Analysis Of Keyword Competition

After my last post about the KGR keyword method, I had a few questions that made me realize I should probably talk about manual analysis of competition as well.

Now, I'm going to preface this post by saying that getting really good at manual analysis just takes practice and experience. It's the kind of thing where the experienced folks can look at the SERPS (search engine results pages) and say "Oh yeah that's a tough keyword" while beginners are left scratching their heads thinking "But it's low QSR?".

So don't worry if you don't immediately get the hang of manual analysis.

But first...why bother with manual analysis?

There are a few reasons why you should take the time to get better at manual analysis:

1.) You'll pick niches better because you won't enter something that was more competitive than a keyword tool was suggesting.

No keyword tool is perfect, and while Jaaxy et al are great for helping you quickly filter out the obviously competitive keywords, there are still false signals.

Low QSR isn't the be all end all of ranking in Google, so the better you get at manually checking SERPS, the better you'll be able to leverage Jaaxy to confirm if a niche is really as low competition as you think it is or not.

2.) You'll pick keywords to focus on better as well.

I don't know about you, but when I'm working on sites, I like to pick a few "Core keywords" to focus on. There are always going to be articles I write that never rank, so I instead choose some main keywords. Of course, a large part of choosing these comes down to their search volume, but I'll also base it on how well I think I can rank.

Once I have my main keywords, I'll build many other posts around this topic so I can link internally to the main posts from the supporting ones, and get better ranking as a result.

A key factor in figuring out which ones to pick is how competitive I think they are. "Make money online" might look like a cool keyword to focus on, but I'll never beat the sites already ranking for it, so why bother?

3.) You'll generally get better at learning how Google works.

I often get asked "Should I put these two keywords in the same post because they're similar? Will Google rank one article for both keywords? Or do I need two articles?"

Well, the answer to the above question is usually to merge the keywords into the same post, but how do you know what Google is likely to do? Google the keywords for yourself and see if one article is ranking for both.

The more you manually look at what Google is doing and rely less on a tool, the more you'll learn.

This is also why I said it's going to take a bit of practice before you can properly master manual analysis.

Anyway, let's move on and talk about doing things manually.

As I've explained, it takes practice to get good at this, so what I've done instead is come up with a list of manual checks that every beginner can do.

It's not an exhaustive list, because some things in manual analysis are subjective (like judging how "strong" a particular site is), so I've only focused on the things anyone can do without needing to guess too much.

Alright so let's get started, the first thing you're going to want to do is Google your keyword, and take a look at the top 10 results ranking. Ignore the paid ads and other stuff Google might show.

Question 1: What Types Of Sites Are Ranking?

Are the majority of them eCommerce sites?

You might see this if you are searching for a product type without "best" or "review" in it. For example, let's search for "Straight Razor" 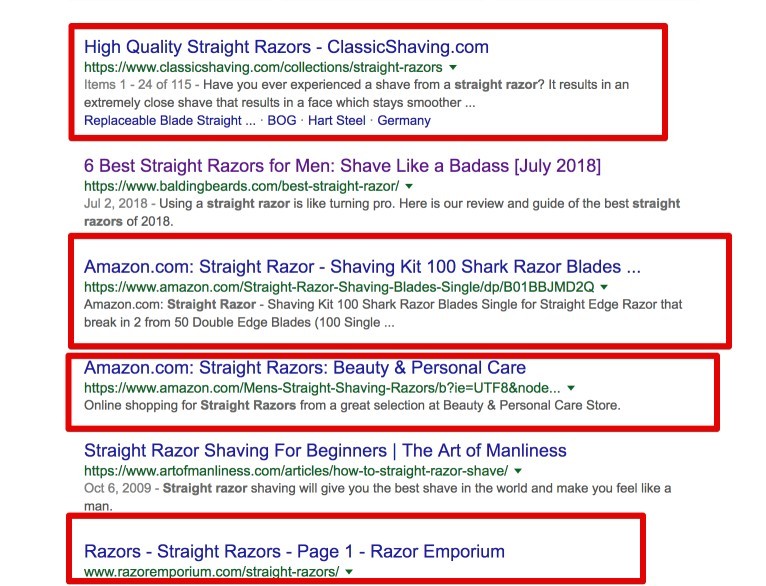 The ones I've highlighted in red squares are eCommerce stores. They aren't reviewing razors, they physically sell them.

When you find a SERP that is dominated by eCommerce stores, it's going to be hard to rank your info or review article there.

In this particular case, there is a "best straight razor" and a "how to" article ranking too, so it is possible for an affiliate site to rank...but it's going to be tough. 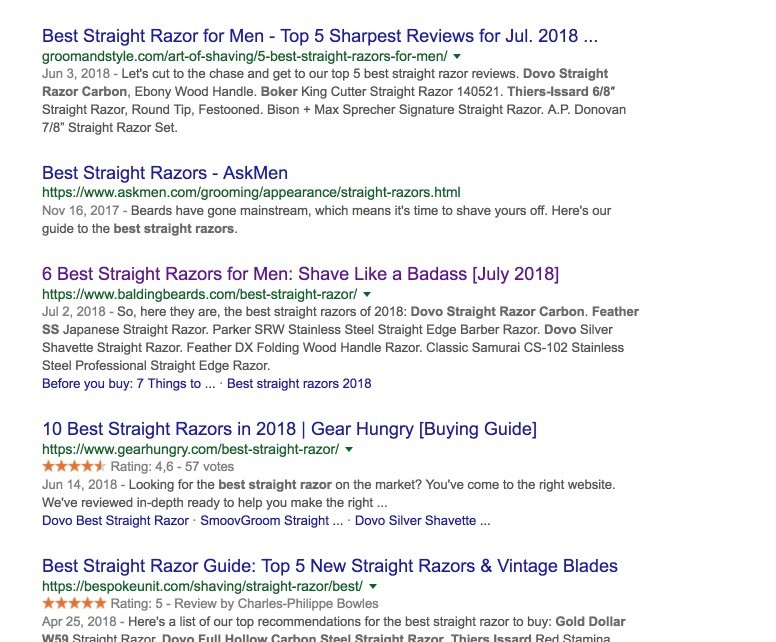 Every single one of those sites listed above is an affiliate/review site. This is the kind of keyword we want to find.

So, before continuing, ask yourself "Is Google ranking the kind of articles I plan to write for this keyword?" if it is, then great, we can keep digging deeper. If it isn't, then maybe you should forget that keyword.

Question 2: How Strong Are The Sites That Are Already Ranking?

This can be a tricky question to answer.

For me, I can tell within a few minutes whether a site is a big, strong, authoritative site or not, but if you're a beginner, you might have no way of really knowing.

1.) Search for a lot of keywords in your niche. If you see the same site(s) coming up over and over again, then that's probably a good strong site. If you see that these sites are always ranking for the keywords you're looking for, and every site on page 1 looks strnog, then it may take you a while to rank up there with them.

This is never a conclusive test, so don't be scared and think "ah man, all these guys have awesome sites, I'm screwed". I'm just using it more as a way to identify if a keyword is weak or not. If you DON'T see these tough guys up there and you just see a few crappy looking affiliate sites, then you're probably good to go!

2.) Check the size of the site. Enter "Site:thatdomain.com" into Google and see how many indexed pages and posts it has.

Check out "best products" vs "standingmixers"

One has thousands of pages or images indexed, one has just a hundred or so.

If you see about half of the sites in your keyword's SERP are weaker affiliate sites, that's a great sign that you can rank up there among them over time.

3.) Do they rank highly for a lot of keywords?

Imagine you find a keyword, and there's a site ranking position 1 for it. Now you go and search for about 20 other keywords. Is that site ranking for them too? Then it's probably a strong site.

If that site is nowhere to be seen, or only ranks for a few of them though, then it's probably a weak site. This means that the keyword it ranks highly for is probably a lower competition keyword too, since a weak site is ranking for it.

Does that make sense?

Edit: Just realized I put this tip in twice, but hey, now you have twice the chance to learn it.

Question 3.) Are There Forums Ranking?

Whenever I see a keyword where there are forums ranking (or other similar sites), I lick my lips. These are my secret weapon.

Google doesn't really like ranking forums very highly unless they are huge, so when you find forums on Page 1, guess what!? It means Google hasn't found anything better to rank for that keyword. This means your site is going to become a prime candidate for ranking.

Here are some other sites I class as weak:

1.) Pinterest (while Pinterest is a huge site, you don't really see its pages ranking in Google very often, which means it's weak).

If a keyword has multiple forums or sites like those above ranking, then this is gold.

You don't find a ton of keywords like this, but when you do..BOOYEAH!

Note: I made a training in the past about how to find more of these. Watch the video here.

There are other methods I like to use when digging deeper too, but they take practice and experience, and sometimes expensive software tools, so I don't recommend you worry about them for now.

If you practice the things I've talked about above though, you'll get better than most people at keyword analysis very quickly, and that's a huge advantage, since you know which keywords to focus on, and which ones to just wait and see how they pan out.

You probably have a bunch of questions, so feel free to ask them below.

Write something…
Recent messages
TyffaniCox1 Premium
Very informative, especially for newbies like myself. Thank you

Reply Like Like You like this
KRhiz Premium
All good tips thanks. Whenever I do a google search on things I want to know sometimes I will see forum links and now I know why! Because there's no one else writing about that specific problem. Aha

Reply Like Like You like this
Joes946 Premium
Gotta admit I am guilty of taking Jaaxy's word for it. Never really tried the manual method. Gonna give it a try.
Thanks
Joe