Jay did a great webinar last week about selling websites and domain names. This morning, I got an email from Empire Flippers, one of the companies Jay mentioned about where to buy and sell websites.

Disclaimer: I'm not endorsing, promoting, or making any money by talking about Empire Flippers. I'm simply presenting it as a resource if you want to sell your business.

There were 11 new listings this week. Here are some examples of what's available for sale: 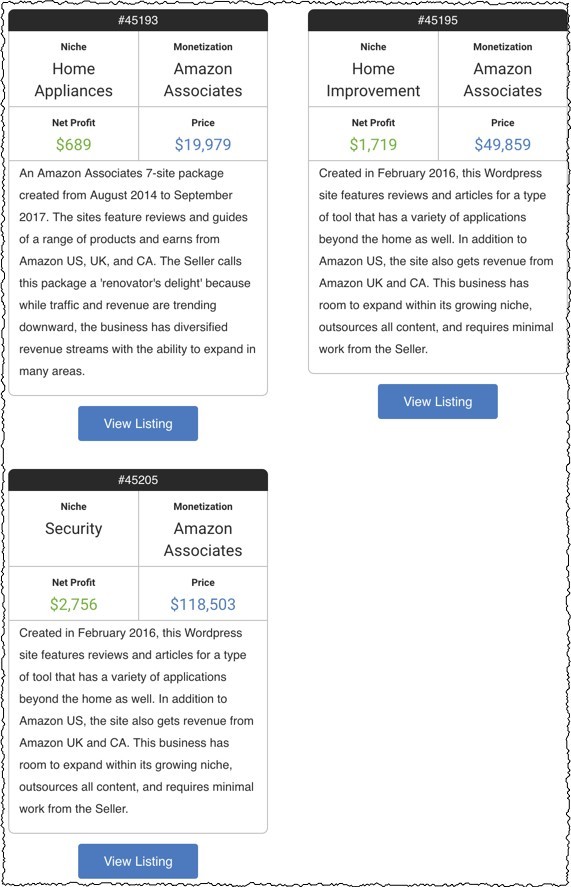 Look at the pricing. A site earning only $689 per month can fetch almost $20,000. Many Wealthy Affiliate members were earning over a thousand bucks per month by the end of their first year, so a twenty grand payday isn't out of the question at the end of the year.

Hm. I'd rather the income so I don't have to pay a huge chunk of taxes on the sale, but some people like the "build and flip" business model. Why not? If you can build one successful site per year, or maybe even two side by side, that's easily a six figure income.

It's pretty cool to imagine that you could have an income generating business like that, and at the end of it, you don't have to say 'Oh well, that was nice. Time to go back to the working world'.... You get to hand it off to someone else and collect over a hundred grand for your efforts.

Notice: These are all Amazon Associates based websites. This is what you're leanring inside Wealthy Affiliate. These websites for sale were built by people just like you. The internet is full of opportunity and the people making money online are the ones that seek out, test, and take action on these opportunities.

And you know what else? These websites go fast. I rarely see a site listed for more than a few weeks, let alone a few days. Buying profitable websites is in high demand as new people start thinking, "Hm. Maybe I need some extra income for retirement", or "I need the extra security of a side-hustle in case things at my job don't work out".

Online business is a growth insdustry, and you are learning the ropes here at Wealthy Affiliate.

Have a great week everyone.

Write something…
Recent messages
DebbieRose Premium
Hmmm...I'd sell it and then start to build another site. If I did it once, I could do it again. Of course, it depends on the niche and how connected and passionate I was about the message and the influence I could have.
Debbie

Reply Like Like You like this
Wdcope Premium
Nathaniel, something I thought of while reading this is that most people would not know how to keep promoting it the same as those who built the website. Nothing is guaranteed in success just because we buy a website. The same goes for Franchises also. I feel it is far better to work hard on your own project with good mentorship and guidance as we have here, then protect that site. Another take on shiny object distractions.
Good post!

Reply Like Like You like this
nathaniell Premium Plus
@Wdcope
Interesting take William. If you sell a site, you do have to remove yourself from your "baby" and take emotions out of it. That can be hard!