Operation Vegas 2021: Feb Update (Plus Updates on Other Sites)

Happy March, everyone! Time is flying, as usual! I hope you had a good February.

For me, as productive as I was last month, I feel like it was the opposite this month.

It all started one fateful night.

I was making a batch of meatballs and I had too many things on the counter top. Including my computer. And a glass of wine.

Let me also tell you I'm a *little* on the clumsy side.

I went to grab a tray of meatballs off the counter to put in the oven and I knocked the bottle of wine over. Thankfully I saved it! But in the process, I knocked the glass right onto my keyboard.

Several days later, and almost the cost of buying a new one (cry emoji again), I got it back.

Thankfully, I still have my old computer so I was able to do a little bit on there. But that really set me back, mostly mentally. It was hard to get back on track after that. It bummed me out.

But, you live and you learn. I am certainly more careful about where I put my drinks and my computer now!

With that said, let's move on to see how February went.

It wasn't all doom and gloom this month. I was able to accomplish some things. 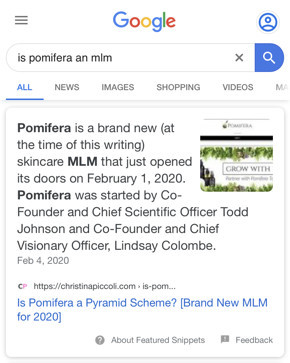 I haven't done a THING with my email. And I want to do more on YouTube. The thing is, time is so limited. I always prioritize writing new posts. They sometimes take me 3 days now just because I don't have too much time to work on them.

It's frustrating because I want to do so much more.

OK, let's get into stats.

It's nice to see that even though February was a shorter month (and these stats only go to Feb 29, not Feb 29) that everything was still up. Except CTR, but I'm still pretty happy with where that's sitting.

For fun, I took a look at last February's stats:

So that's a pretty big improvement in one year!

Let's move on to traffic. 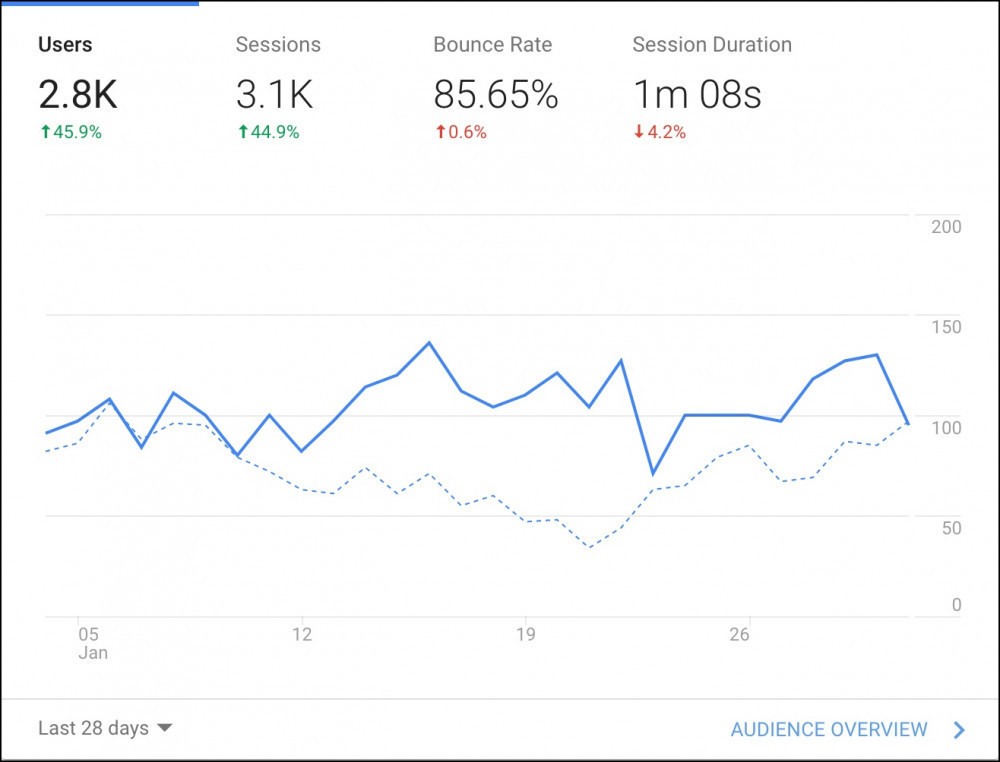 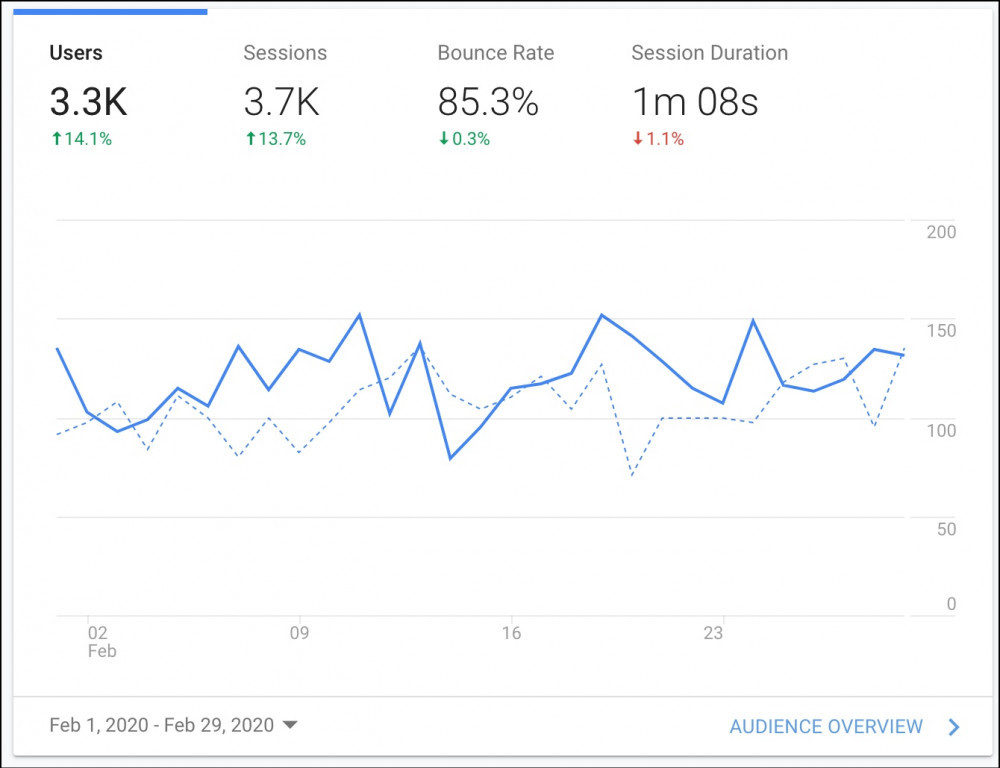 I finally hit that elusive (for me anyway) 3k users mark, which I talked about in this post. I hit 150 users in a day, and I think that's the most so far.

When I get to 200 users in one day, I'll probably create another mini-milestone post. So, look for that soon! (I hope!) 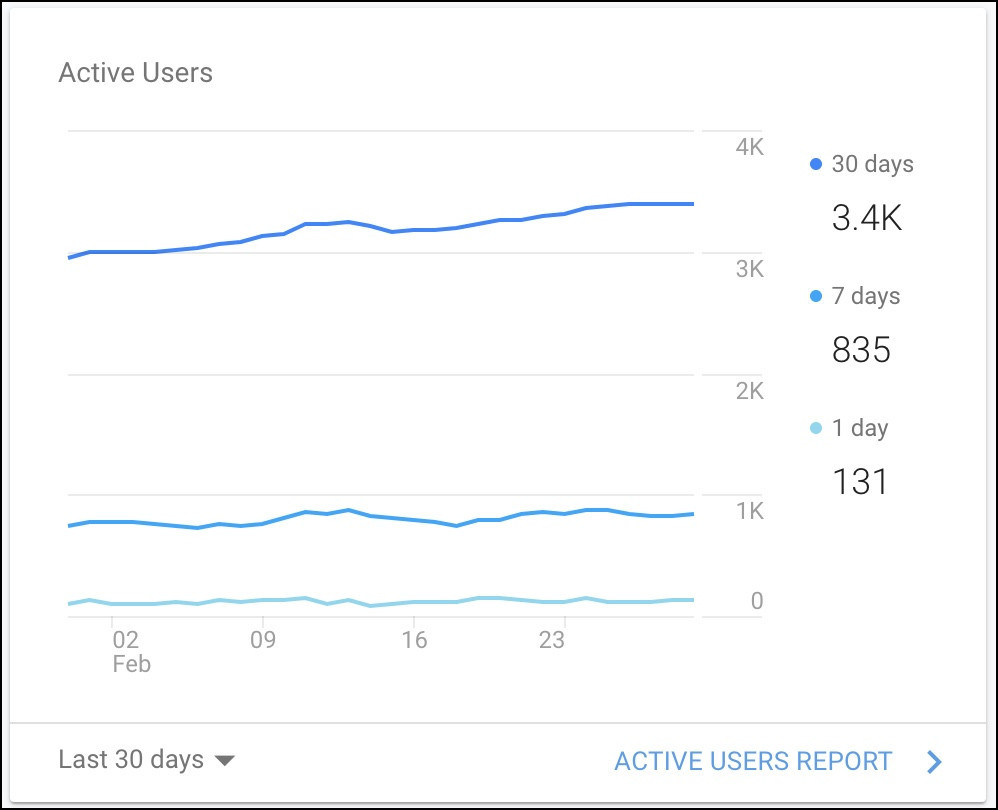 So you can see things did slow down this month in the sales department. Writing about MLMs is giving me a boost in traffic, but those people definitely don't sign up very often, which is something that Dylan and Grace talked about.

I do mix up my content a bit, but maybe not enough.

Something to think about for March...!

Update: I also received a Jaaxy commission of $24. That's always a nice surprise!

I really didn't do a lot on this site this month. I only wrote 2 posts, and I didn't even do my Pinterest pins on the 2nd post yet. Eek. I'm so behind!

For some reason, my stats aren't showing up in Seach Console. So, we'll have to come back to that another time. 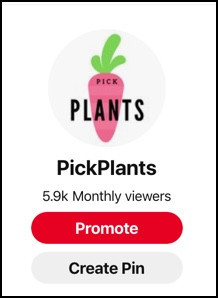 I had one pin take off, so that was helpful!

I have 9 total posts on this site, and I'd like to get it to 20 or 30 and then just let it sit and simmer while I work on my next niche site. I need to come up with a content plan for the next articles, and I think that will help me stay on track. 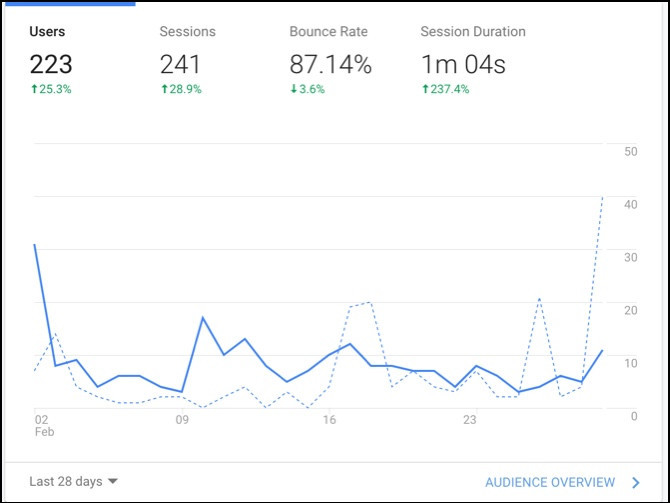 Day / week / month traffic is also slightly improved, but nothing to write home about yet. 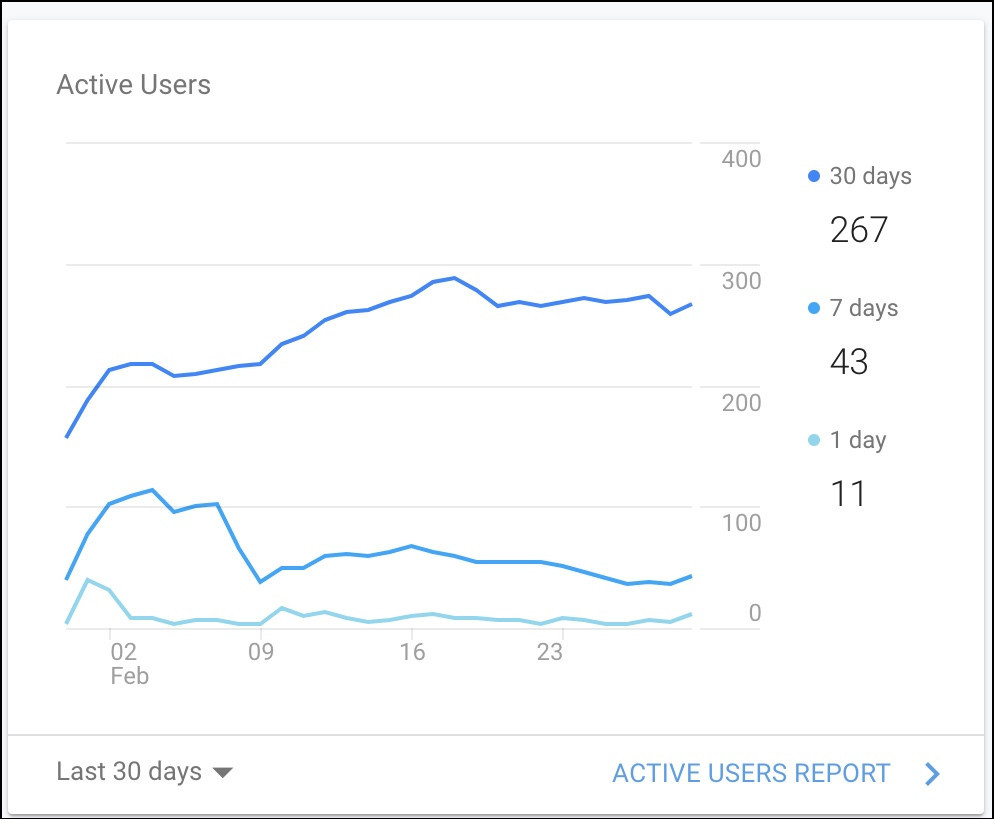 I haven't gotten any sales from this site in February.

Now, tell me how your February went. I'd love to hear about it in the comments below!

Write something…
Recent messages
Colorman Premium
Ouch. Sorry, Christina for that mishap with your computer. Glad you got it all sorted.

What is interesting is I get most of my referrals through Jaaxy. This year I've heard 5 referrals. My stats seem to go up and down. I have over 300 posts and I think I need to start revisiting my old content and giving it a new lease of life. I'm also thinking of going full throttle on Pinterest after Jay's webinars these last few weeks. YouTube videos is another thing that I need to get comfortable with. Diversifying one's traffic sources is more effective than having one source.

Good luck to everyone. Let's work hard and make it to Vegas.

Reply Like Like You like this
cld111 Premium
@Colorman
I haven't really tried promoting Jaaxy, but it's something to consider. Do you have a review on it, or how do you get people to Jaaxy in the first place?

I need to watch Jay's Pinterest webinars. Pinterest isn't quite what it used to be, but you're right, it's always good to diversify traffic.

I hope to meet you in Vegas!

Reply Like Like You like this
Colorman Premium
@cld111
Hi Christina. I do have a post on how to do keyword research which is on my primary menu on my website. I think that is where most of my referrals come in from. Check out Jay's Pinterest webinars. They are quite insightful.

Best of luck. Hope to see you in Vegas.

Reply Like Like You like this
SondraM Premium
Your story makes me grateful that I only lost a keyboard after a mishap with a cup of coffee.

I look forward to meeting you in Vegas in 2021. I am confident that this will be the year that our work starts paying off in a big way.

Do you mind sharing how many posts you have on your MMO site to date? I am still wondering about that 400 number that Grace talked about.

Regardless, I am excited about the progress that you have been making. You have also done an awesome job with your WA updates.

Best wishes for an amazing March. A month were wine does not meet any of your electronics devices. (I just moved mine further away just in case. )

Reply Like Like You like this
cld111 Premium
@SondraM
Oh you are lucky with your coffee! I thought that maybe I could get away with just replacing the keyboard, but they had to replace almost my entire keyboard.

So yes, I now move my beverages further away from my computer now too. I have learned my lesson! :)

I don't know if I get to Vegas in 2021, but I'll keep going until I do get there. I would love to meet up with you though!

I currently have 288 posts on my site.

How about you? How's your going? Do you have an update post anywhere?

Thanks for stopping by and commenting!

Reply Like Like You like this
SondraM Premium
@cld111
I have been so scattered with everything in life, the I have not been doing update posts.

Yet. If I did, it would read - the website is still alive. There are still way too many posts sitting in draft folder.

I published two last night that had been in my draft folder for two years. When I published, they were still "draft quality" yet they were not product reviews, so I don't think it is really worth the time to make them better.

However, I can keep the momentum and drive for my online business that I have recently gotten going, I may start doing updates like you. I see lots of advantages to what you are doing.

I also liked the way that Grace tracked what she was doing. That is why I asked about the number of posts you currently have.

I hope you have an awesome week and amazing March.

Reply Like Like You like this
cld111 Premium
@SondraM
I love that you're persisting and starting to get content out there again, even if it's not 100% perfect. At least you can get some momentum again.

Yes, I love how much Grace has shared and I always take her advice to heart.

Have a great March yourself!

Reply Like Like You like this
mlight56 Premium
Good work ... your getting up there even with all your mishaps ...
I haven't done much in posts been working on getting an online store of physical ready for the spring ... lot of work and time consuming ... I'll get around to it some day soon ... up wards and on wards as they say ... cheers ... Michel

Reply Like Like You like this
nudge1969 Premium Plus
Nice work Christina, apart from spilling your wine on your laptop. I'm more careful not to waste my wine :)

I think I'm around the same level as yourself. Although I had a spike in traffic last year, it's back down to around 150 visitors per day now. It all came down to one article that I eventually got outranked for. Damn you Gighustlers!

How many articles have you posted? I've just ticked off 300 yesterday. Hoping this is the year my traffic takes off.

What are your posts mostly focused on?

Reply Like Like You like this
nudge1969 Premium Plus
@cld111
The last 200 have been mainly reviews. Looking to diversify my reviews though, as I seem to be competing with too many others.

I need to take Dylan's advice and review 'get paid to' programs or cryptocurrency trading programs.

Reply Like Like You like this
cld111 Premium
@nudge1969
I can't wait to hear how diversifying goes for you. I can't get into cryptocurrency. I just have no clue how it works! But if it works well for you, then I may consider figuring it out. haha