The man I will never be

Once upon a time, there was a man who sat in the shade of an old broken down building and simply watched everybody and everything just pass him by.

He did not know why everyone was passing him by.

He just knew that he had been told to sit there and mind his own business - and do what he was told.

He had asked for a different task, and had wanted to study music, and play ten different instruments. After all, he had won many awards at school in his earlier music days. Some had said that he was a boy genius. – But -"No," - time and time and time again they had said –(time and time and time again.) they had boomed –
“Man who is destined and commanded by our royal decree to sit here and watch the people and all of life, just pass him by. -That is an illusion. You are, and were destined to do only do one thing. This is your only function and your only job from now on. - Forget your aspirations to want to become a musician. - Man who is destined to just sit there and watch everything and all the people just pass him by - forget anything else. You have been chosen for this VITAL job and role. You will have to just sit there and watch as everyone and everything just passes you by.”

The man who just sat there and watched all life and people just pass him by had tried to plead with them – but his words had always fallen on deaf ears. He was now in apathy.

“In fact we are so certain of that, that if you so much as pick up a musical instrument and play it, or dare to do anything else we will...we will have you put to death." They repeated this to him every day.

No one ever went against them. It was fruitless.

So every morning after the other man who was there to watch the people and life pass him by - every night, had stopped just sitting there and had gone to bed, the man who was destined to ONLY watch the people and life pass him by day, would get into his chair and start watching everyone passing him by until he had finished his shift and the other man, (the man who was to watch the world and all its people pass him by through the haunting night hours, was ready to take over again. - Oh yes. - There was a man who would sit there the whole day, and one that would sit there the whole night and just watch all the people and everything just pass them by – (every single day- and every single night.

For society to not have that could prove fatal. - Why, you might ask? - Because they said so – and they could, and should never be remotely disobeyed. - Ever!

The other man, the man who sat and watched the world and all its people just pass him by through the haunting and daunting night hours, - to date -had never responded.

"Why do you just sit there and watch everything and everyone just go on passing you by," His old college friends would ask as they passed by him every day.

They all remembered the man who just sat and watched the people who passed him by every day, - from their college days. They recalled. - He used to be so alive and willing to take on life and living. - Why was he now given the task to be the man who had to watch all the people and life just passing him by?
It did not seem quite fair! – And neither did it make much sense. – But someone had to do it. – Why? -You might ask. - Because they said so and they had to be obeyed.

They, the people that watched the man who was always watching them passing him by, - had all gone on to follow their dreams.
Some had succeeded - and some were still trying - and some had failed miserably - But at least they had tried!

"You just have to sit there, and not say a word. If you say a word, then we will punish you. -They had kept on telling him.

“Your job is to just sit there and watch everybody and life passing you by until it is time for you to go to sleep.” Nothing more and nothing less.”

“Now we do not want to ever see you doing anything else. - In fact yesterday someone saw you fidget. No more fidgeting. Just keep watching the people and all of life just passing you by,"

Them, he had to obey. - Those others that just passed him by, - well he just had to watch them. That was now his lot in life. He had been sentenced to a life of watching. Sentenced to sit there and watch the people and everything just pass him by. – Besides, no one would understand what he was going through. They were always there, watching his every move and recording every heartbeat. They had to be obeyed. -All the time.

"I remember you when you used to encourage me to follow my dreams. What happened to you? Why are they able to control you like this?" Tome added, shaking his head.

"Man who just sits there and watches all of life and all its people just pass him by - remember that concert you gave. - It was amazing. You brought the house down. Why do you no longer want to play your piano?" Tome would ask exasperatedly. - But the man that watched everything and everyone just pass him by - had said nothing.

He just sat there, staring - and he watching everything, and all the people going on passing him by. Tome Smith did not exist to him. He too was just one of the many people that he had to simply watch passing him by.

“Don’t you dare listen to him!” they had always commanded him.

He leaned across and whispered into the man that sat there, just watching the world and all the people go by’s ear.

" Who is forcing you to sit there and do nothing?" Samuel Doitnow whispered the question softly.

The man that just watched the world passing by uncharacteristically jumped up and found himself shouting an answer. - Many people passing by stopped and looked at the scene before them. This man had always been so quiet and had never looked like he had much life in him.

My God, the man that just sat there watching the world and its entire people just pass him by, was talking!

"They. Them! He screamed. They tell me and I have to obey."

"Where are they - or them, as you refer to them?” Samuel Doitnow, asked calmly.

The man who sat and watched the world and all its people go by, was now very visibly disturbed. He was grabbing for his head.

The man that would sit there and watched the world, and all the people go by, was now looking and acting like a madman.

His face was red, contorted, and tears were streaming down his face. - Obvious signs of Catatonia were setting in.
He reached into his pocket and pulled out a bottle of psyche meds and swallowed, even more than usual.

Both Samuel Doitnow, Tome Smith, and a few other people that were just passing by tried to stop him - but to no avail.
“Stop. Stop.” They had all screamed.

The man who just sat there and watched the world and all the people just pass him by used all of his strength to hold them at bay.

He swallowed the read and the blue and the mottled grey psych tablets before they could stop him.

"Now leave me. Just leave me to watch you and the world passing me by. Leave me in peace. Go...please" the man who would daily watch the world, and all its people passing him by, - implored with outstretched hands of prayer.

Then he was quiet - again – subdued - More closed off than he had ever been before.

Locked up in his own little spinning- world; - a world that would now allow him to just sit there and watch the people and life and everything just pass him by - 'in peace.

"It is Ok," -They were back. The voices that had to be obeyed – were back. He no longer had to think so hard.

They, them – could now do his thinking for him, whilst he, - would now have to just sit there and watch the people and all of life just passing him by. -They could do the work!

"We forgive you this time - but this is the last time we will warn you ever again. This is your last chance. Disobey us one more time - ever - and there will be consequences - believe us."- The voices spoke sternly. They were serious voices.

Then as fast as they had come, - they, the voices in his head, were ... were.... gone, - and the man who would, every day just sit and watch the people and all the people just past him by - was back in his safety cocoon.

No sooner had he lulled off when a something prodded him from behind. - It was the other man that took over from him for the night shift. - The other man. The man that would now be there for the next twelve long drawn out haunting and daunting night hours - watching the world, keeping an eye on the world- and all its people passing him by.

The man who watched the world and all the people that passed him by during every day, rose, - and unsmilingly gave up his chair, and went straight to bed.

He left his chair there for the man that watched all the people and everything that passed him by every night.

"Is there, anything that can be done for them," Tome asked Samuel.
Samuel Doitnow just shrugged his shoulders and walked away - to get on with getting something done.

This was the last time he was ever going to try and help these two – ever.

He had better things to do with his life. He was behind in his work now and would have to work extra hard for the rest of the day, to be able to catch up with all his tasks and meet his regular daily targets.

Now ask yourself when you read this. - How much of the man that just sits there and watches the world, and its people, just pass you by, - lies within you?

“Do you and can you hear the voices?”

Write something…
Recent messages
danbarth87 Premium
You are an awesome writer, dude. 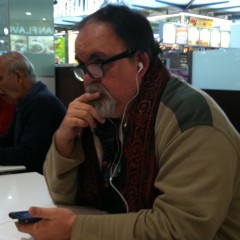