Troubleshoot Connecting to FTP at WA
Video by nathaniell
Added May 21, 2013 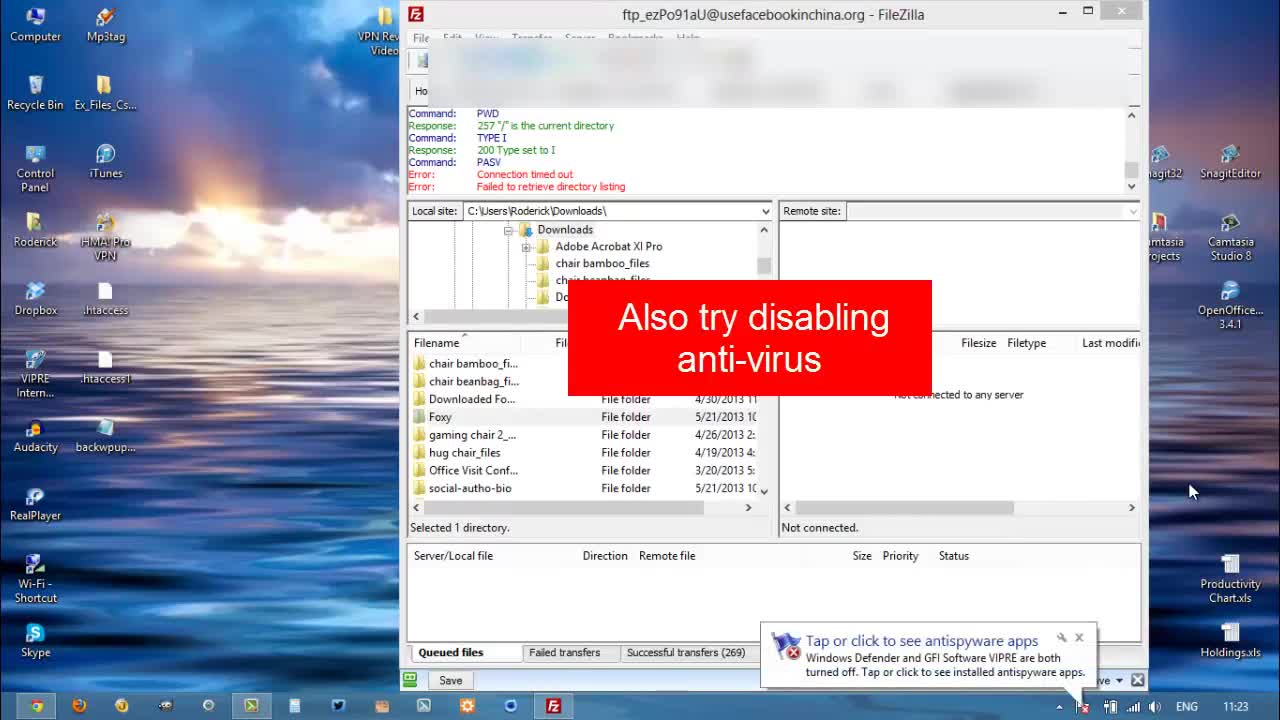 Rank 7
Unfollow
Connecting to FTP at Wealthy Affiliate is a little bit different than at other hosting sites (at least for me). I just couldn't get it to work!

There are a few tricks to try out if you are having trouble connecting to FTP for your sites hosted here at WA. Watch the video to see what you can do, and I show you what works for me.
Join the Discussion

Write something…
Recent messages
kiya05 Premium
Good info if I ever need it, but I'll stick to no FTP for now, but will save this, just in case I ever get that far. Thanks.

Reply Like Like You like this
kiwinana Premium
Interesting!
Do we really need FTP? I used to use it many years ago.
Now I have a Mac OS X so far I haven't needed it.
But I will follow this thread, and see what else comes up, as I am a bit confused reading the comments below.

Where are the files located that create your website? They are on a host, for example, WA.

FTP is one way to do this.

I hope this answers your question.

Just highlight it, copy and paste image and text into a TextEdit document on my Mac and save it.

But what about your .htaccess file? Or what about a plugin or theme? You cannot copy/paste these things.

For example, I bought a professional plugin about a year ago, and the purchase link since expired. Recently, I decided to use that same plugin on a new site, so I downloaded a copy of the plugin from my old site via FTP, then uploaded it to the new site.

Sometimes Google or other secure access type things will give you a file to upload to your website to confirm that you are the owner. If this is the case, the ONLY way to get the file into your site is by uploading it from your computer with FTP.

All that considered, for basic use of Wordpress and affiliate marketing, most can be done without FTP. It's definitely a good skill to have and be able to use, but not necessary to have a working website that makes you money.

Reply Like Like You like this
kiwinana Premium
ladyvalerie5. FTP is software used for uploading files to your web page.
Hope I answered your question right, if I didn't will someone please correct me.

Reply Like Like You like this
Labman Premium
ftp stands for file transfer protocol. and yes kiwinana is correct that it is a software that can allow you to move files into your website. Most cases won't require this but occasionally a file will need to be uploaded or downloaded using this software. See Nathanielle's reply above.

Reply Like Like You like this
papageno Premium
This is no help at all to me as it assumes you have FTP connection. My whole problem is that I don't - I keep getting a message saying 'connection time out. Could not connect to server'. Also it does not run through properly

Are you sure you've disabled your firewall? You might not think it, but this can prevent you from connecting to the server. Also, check that your password and logins are correct. They are case sensitive, so PassWorD is not the same as Password. This is probably not the problem because if the connection is timing out then your password verification is not the issue, but it's worth trying.

Are you using Filezilla or CoreFTP? Perhaps try switching, or connecting to a different site if you have more than one.

Hope this helps. Let me know.

Also if you have a capital "i" it might look the same as a lowercase "L" if you are typing it out. Here's an example: which is the capital i and lowercase L: Il ???

Reply Like Like You like this
papageno Premium
Thanks a lot for your answer. I've tried disabling my Windows Firewall and also making an exception of Filezilla. Neither worked. I've checked all logins about 100 times! i've also downloaded CoreFTP, which I didn't get on with.

Reply Like Like You like this
papageno Premium
Also, thanks for your reply, ThomasPaul. I did look at your Blog but unfortunately that hasn't helped either

Reply Like Like You like this
ThomasPaul Premium
What's the exact word for word for word error message you're getting? Might want to try to do a google search with that message and the name of the FTP client to get some ideas to try. Is windows firewall the only firewall you are using? might want to do a google search of "windows firewall preventing FTP" or something like that. Might be even worth it to uninstall windows firewall completely to try it out. If you do try the complete uninstall make sure you reboot your computer. Once you reboot computer connect to the internet and try to FTP, if it works you know it's something to do with windows firewall.

Reply Like Like You like this
ThomasPaul Premium
Do you have access to another computer such as a friend's computer where they'll let you install an FTP program? If you do, I would try that and see what happens. If it works on another computer then we know it has something to do with your computer.

Reply Like Like You like this
papageno Premium
Thank you, ThomasPaul, I'll try that but it will have to wait for another day - i'm feeling too deflated about all my WA activity at the moment to do anything all

Reply Like Like You like this
kiya05 Premium
I don't know if I need this or not. When I was doing my website, it said something about downloading FTP, but it just brought me to some tutorials, so then I spent about 4 hrs on Live Chat, and talked to about 5 people, until someone said I didn't need it, so the whole thing totally confused me, but I quit looking for an answer at that point.

I look forward to this video, to see if it's the same thing I was having problems with, and if I even need it at this point. When I joined WA before, I ended up having to change from Explorer to Firefox, I think it was something to do with Plug ins, so I may end up having to do that again, since I went back to Internet Explorer, but I kind of took an extended break after that last one, I'll start again soon.

I'm on Pinterest all the time, and now that they are talking about using Pinterest here at WA, it makes me want to do this more, I've been pinning everything to do with blogging, etc., and business marketing using Pinterest, for whenever I get there, too bad this isn't as easy, or fun, as Pinterest. Anyway, looking forward to this video, I'll get started again soon.

Reply Like Like You like this
nathaniell Premium
Lol. I'm looking forward to the video too! Sometimes they render quickly, sometimes it takes a day or two. We'll see.

On the other post you said you figured out you normally don't need FTP. This is true. I use it for a few things though, so it does come in handy.

1) Last night I broke 30 different websites when a plugin update caused an infinite redirect. I had to go in FTP to delete the plugin.

2) Sometimes Google will ask you to upload things via FTP to confirm you are the owner.

3) Some plugins/themes are too big to upload with the Wordpress uploader and need to be done with FTP (these are usually paid things).

Reply Like Like You like this
kiya05 Premium
It all sounds like greek to me, but probably something I'll need at some point, so better figure it out soon, or be sorry later. You have 30 websties??? Geez, I figure at the rate I'm going, it'll be MONTHS before I have one!

Anyway, maybe I'll go back and see where I got lost on this FTP thing, and if this Port 21 thing Kyle was talking about doesn't work, or make sense, then hopefully your video will.

Thanks for letting me know what it's all about though, another thing I was clueless about. I think I've used the word "clueless" more in the last couple months since I joined WA, than I have in years, oh well, if the shoe fits. Anyway, I'll check tomorrow or so and see if your video is up.

Reply Like Like You like this
kaylab123 Premium
Kiya05, I was taken to the same trainings page when I clicked on the "download free FTP program." Not sure what the deal is with that. I'm using Safari, so maybe it has something to do with that.

Reply Like Like You like this
kiya05 Premium
Hi Kayla, that's my niece's name, I named her because I thought it was a great name, do I have great taste, or what? Anyway, I have Internet Explorer, but I will probably have to change at some point. When I was with WA before, some things didn't work, and I had to change to Firefox, then it was OK. After I quit I changed back to Explorer, habit I guess, since I'm starting to think it's not the best. My Pinterest site keeps saying to switch to improve my speed, so I'll probably do that soon.

I think the problem I was having with FTP is it wouldn't dowload, and someone told me that it had been deleted, and to watch the tutorials, but then they kept linking to other things to read, and I just got frustrated, so I went to Live Chat and was told I didn't need it, so I went with that. I still need to watch this video and see what it's all about, maybe save it, just in case I need it someday.

I don't know what Safari is, but most this stuff is a mystery to me at this point, but I'm pushing through. I asked Kyle about FTP too, just to make sure I really didn't need it, and he also said I didn't need it, maybe at some point, I foget what he said about when you need it, but from what he said, I don't think most people do, that's what I'm going with anyway. Good Luck, let me know if you find out anything contrary to that.