How to block Referral Spam and Countries within Google Analytics.

First the story and issues then the solution so bear with me for a bit.

Lately there have been some strange occurrences going on with my Google Analytics Dashboard and since then I have found out some members here have been getting the same issues.

We are not the only ones as during a recent visit to the Google forum I noticed others are having the same problems.

When I go to look at the GA dashboard within the website there has been many so called referrals coming mainly from Russia.

This is not an issue with WordPress or even your website.

These referral spams are not even visiting your website even though Google Analytics states it is.

It also seems to be a hit and miss part as well that’s perhaps why other members are not affected while some are but know it is not restricted to just WA members.

I also found out from a tech person that he noticed this was happening to a lot whose numbers ended in 1. Whatever the reason for this is they are targeting Google Analytics and as always the website owners are the Lab Rats for their testing.

Whether that true not sure as I don’t know how many numbers the GA codes goes up to.

That certainly won’t make my Analytics look good in Google’s eyes or mine.

This has been going on for a while but another parts I noticed was that my bounce rate which for the better part of the last 8 odd months was around the 0 to 2%.

Now due to this issue from these new so called referrers my bounce rate skyrocketed close to the 50% on average and at some times depending on the day up to around the 80% mark.

You will see my list of the Referral spam I have been receiving mostly from Russia some are older which also have been resolved.

So now you may understand why I have not been so happy of late.

At first I slowly I was getting up to 2-3 referrals from Russia then all of a sudden the bells started to ring when it became to 10-17 but from 1 referral with multiple sessions again all from Russia.

I went into incognito mode and looked up these sites and found the majority were the same weird sites, some directing to a real estate site, some during Christmas just showed Santa with Ho Ho Ho on the right side and I am guessing the same in Russian on the left. I wasn’t going to go further as this already confirmed there was something wrong.

These are some of the sites I have encounter since early December till now.

I tried to search for a plugin that could block Russia from visiting my website as this was the Country that was the issue.

I found one but to no avail as all it did was screw up my site to the point I couldn’t see anything when going to the dashboard not even the side panel options for that theme.

I did try other themes but same thing happened with them as well.

So I went back to my original theme and had to deactivate all my plugins and go one by one until the culprit was found.

When I found the plugin I deleted this plus any other unused plugins I had lying around.

Oh by the way

I was also told by support that it’s a good idea to get rid of any plugins and themes you are not using as it can is some cases give hackers or spammers a back door entry to your site.

In fact this was their response that related to a different issue that support fixed quickly.

"We see that you have a lot of inactive plugins and themes, such things provide hackers backdoor when plugins/themes are vulnerable, you "should" delete all unused themes and plugins, update rest to latest version".

So for those with plenty of unused plugins and themes it might be a good idea to do some spring cleaning.

Treat it as a part of a New Year’s Resolution for your website.

I felt it important to add this part about the plugin as it related to the issue with Russia and it's spam but as a side result with out great support team this message is also quite important as like they said someone can get into your back end (I am talking about the plugin and themes via unused or outdated themes or plugins LOL).

Who is to say these Russian spammers won't try.

That’s why it is mentioned here. If you are going to fix one issue you might as well fix another while you are here.

This is my list of referrals I had to exclude and block. 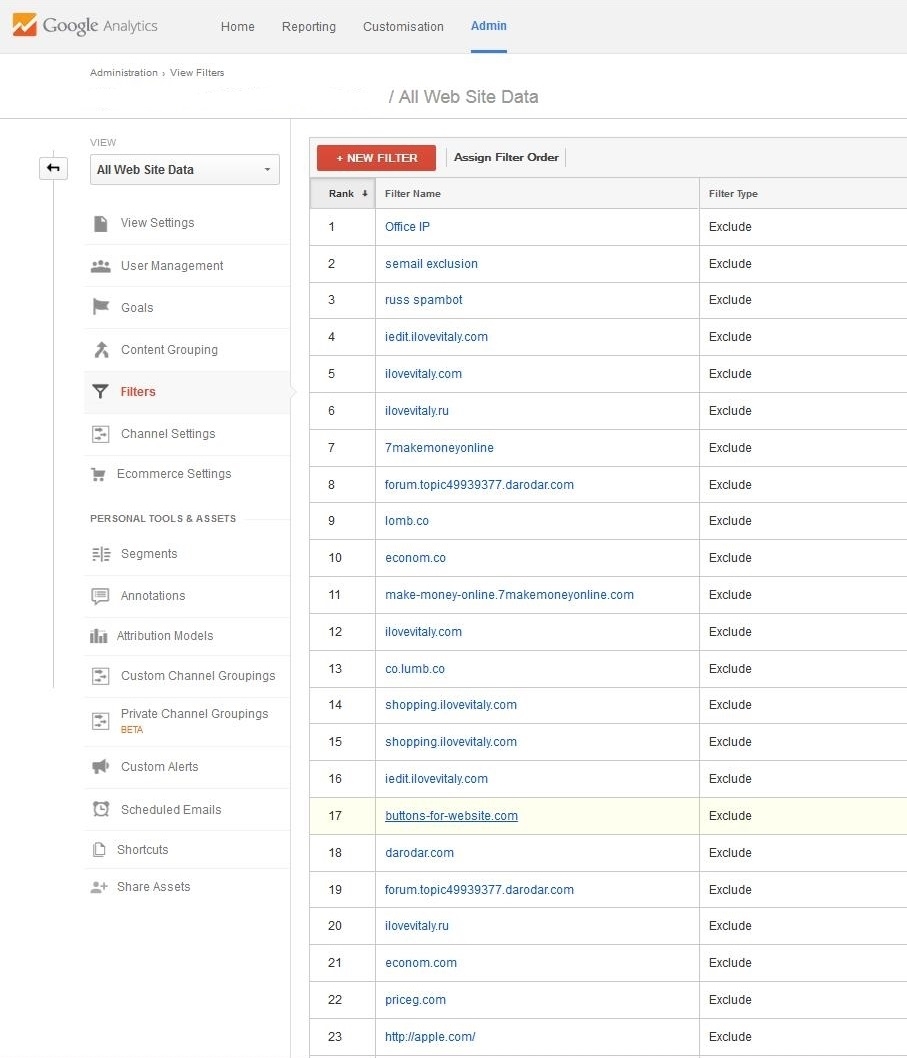 Write something…
Recent messages
Lady May Premium
It's important to delete unused plugins & themes via FTP not WP dashboard. This is because some indiscriminates bury themselves in other parts of wp.content.php

Reply Like Like You like this
Jenna7 Premium
@Lady May
I never realized this. Is it simple to do via FTP/don't you need something Filezilla to do this or is that for other site things?

Reply Like Like You like this
Lady May Premium
@Jenna7
Yes you do, download Filazilla, get your password on WA under SiteRubix. Under folder httpdocs you should find wp.content.php for plugins and themes. It's easier than it sounds and if you tried lots of plugins and themes, then you might find something in there that should be there.

Reply Like Like You like this
SoupGypsy Premium
Andre, what an amazing lesson.. You really worked hard and methodically for this one. Thank you for your thoughtfulness in developing this lesson for the benefit of many. I certainly pray you no longer are plagued with the shenanigans of this group of pirates. BTW, I love the font you use at the end of each post. Very nice to read and look at. donna

Reply Like Like You like this
2Achieve Premium
Really good data... thank you. I've had my online product business with the same contact info and (800)# for over 12/yrs without ever experiencing the following; just this past July, we began getting spammed via phone call/hangup in 4 seconds. That is the minimum time before a charge is incurred. Initially we received 2 to 4 or 5 per day... and in November til today it exceeds 15 -20/day. If we had not been grandfathered from the original phone company we'd be paying flat rate for each call over $250/mo insted of $49/mo. So the spammers are hitting our contact us data; emails & phone, siphoning from membership sites even through many have captcha codes they can break (not all, but enough)... it is a never ending battle!! Cyber terrorism is well entrenched unfortunately. Heck, banks, big box stores, Sony, our Government... they've all been hit and talk about DEEP POCKETS and some of the best IT people out there... well it is an ever evolving concern. Good article for sure but ending it isn't possible as they'll always find a tiny opening. It is all about the digital world!

Reply Like Like You like this
TopAchiever Premium
This is a great heads up on Google Analytics antics and Russian Spammers.... or it could be a double-cross agent from anywhere in the world! :-) We appreciate your input and help to keep up to date with a clean site safe from hackers intrusions!