Getting to Grips with Grammar, Punctuation and Spelling

A bit of a warning before we start: In the following tutorial I'm going to take you through very basic concepts of grammar, punctuation and spelling (a more detailed tutorial will follow depending on demand). If you already know how to use these concepts, you may find this very easy, so if what you need is something a bit more advanced, I would recommend you to have a browse on the internet, where you can find tones of other information more suitable to your knowledge. By all means, stay if you wish, you might find this useful after all, and I would love you to tell me whether you enjoyed it or hated it.

Now, don't panic, grammar is not that scary, really. We use it all the time: when we speak and when we write. We use it when we communicate with each other. Putting it in very simple terms, grammar is a set of rules that make up a language. That's how important grammar is. And you needn't be frightened by it. You just need to learn a few concepts, you don't even have to memorize the terminology -there is no need for that-, you just need to understand them and apply them and then you'll see how much more confident you will be when you use them. So, let's make a start. Are you ready?

In spoken and written language there are words, and, when you are communicating, words expressed on their own don't make any sense unless you put them together in sentences, which in turn, would have to make sense as well. Take for instance the following list of words:

the I nicest have in garden village the. No sense whatsoever.

Let's mix them all together to make up a sentence: I the village garden have the nicest in. A sentence that makes no sense indeed.

Let's mix it again: I have the nicest garden in the village. Yes, that's better. Each word in such cheeky sentence plays a role and they are all equally important. They are all parts of speech.

There are 9 parts of speech in general and here, we are going to list them briefly, with examples, to make you acquainted with them:

NOUNS are words used to name people, animals, places, things or ideas: Lewis, lion, Toronto, scissors, faith. In our sentence above, garden and village are both nouns.

VERBS are the "doing" words, they represent the action in the sentence. Without them, a sentence wouldn't be a sentence, but a phrase. Some examples: to have, to smile, to jump, to think, to sell, to be.

PRONOUNS substitute the nouns to avoid repetition: Let me speak to Martin; he needs to know; The parcel is here, it came without an address.

PREPOSITIONS relate nouns or pronouns to other words in the sentence. Some of the most common are: with, between, in, at, for, by, from, down, since, before...

CONJUNCTIONS join words and sentences together: Mary and Paul; morning or afternoon; he's here, but he won't speak to anyone; John wasn't available, nor was Henry.

ARTICLES are words that go before nouns or adjectives to determine if they are specific (Close the door; That's the new neighbour) or less specific (Pass me a carrot; I want to buy a green shirt; She's never seen an elephant, I'm working on an ambitious plan).

Enough of lecturing. This is all you need to know for now. There is much much more about parts of speech and, of course, grammar, but these are just the very basics. On lesson 4 we will be covering the most common mistakes in English with regards to the 9 parts of speech (besides punctuation and spelling), but now I would like you to roll up your sleeves and try the following tasks. .(you will need pen and paper to do this).. Answers are at the end of the page.

too way office was The the overlooking for my bay ideal expensive business, but

business and Andrew married and ended became Esther partners up

Extract all the nouns, verbs and adjectives from the text and put them on separate lists

Henry got up from his seat and went straight to the canteen. The decoration of the train, the music, the speed they were travelling at, the cordiality of the crew, the friendly atmosphere one could breathe, seemed all taken from a film. For him, the most likely experience on trains was riding on the subway in New York, and to be true, there was nothing to compare.

What types of words are these?

Wealth Otherwise Theirs Philosophy Hard-working Said Developed Frankly For Dream Without Wow! Oh, No! Stood At However Nevertheless Fantastic Him Strictly

That's all for now, folks! Next lesson we will cover the tricky topic of punctuation. Give it a go.

Please. feel free to comment on this course. I would love some feedback, whether positive or negative. I'm open to discussion and to add. remove or change anything you may suggest.

Thanks for enduring, you're stars!

The office overlooking the bay was ideal for my business, but way too expensive

Andrew and Esther became business partners and ended up married

Extract all the nouns, verbs and adjectives from the text and put them on separate lists

Verbs: got up, went, were travelling, breathe, seemed, taken, was, riding, to be, was, to compare

What types of words are these?

Like This 16
Tasks 0/4 completed
1. Read about the 9 parts of speech
2. Put the sentences in the right order
3. Extract all the nouns, verbs and adjectives from the text and put them on separate lists
4. What type of words are these?
Previous Lesson Next Lesson

Top Helpers in This Lesson

Write something…
Recent messages
AlvaroC Premium
Fernando, Many thanks for such wonderful training. Will go on to the next lesson, but first I would like to comment that I did fail : ^Cordiality^ I clasified as an adjective ( understand is ^qualifying^ the crew´s attitude ), but then I find that it is a name (Noun). How could I be able to see the difference. Thanks again for providing us, specially the non-native English speaking members, with this magnificent tool.

Reply Like Like You like this
Fernan Premium
Gracias Alvaro I´m glad you like it. As a general rule words ending in -ity are all nouns (adversity, versatility, complexity, etc) and the adjectives are made up with the roots of those words, adversal, versatile, complex, etc.

Reply Like Like You like this
rickbcf1 Premium
I appreciate a good grammer review. It reminds me to stay on top with the way I speak and write.

Reply Like Like You like this
Bill Carver Premium
You've done an admirable job on a very complex subject. What you covered in five brief lessons would take a fair amount of an English grammar book to cover and teach in detail. I know from experience---my 8th grade English teacher had an excellent grammar book and drilled us and drilled us over and over!

If someone is having problems with English grammar, spelling and punctuation, this is an excellent place to start. Especially with the exercises it should improve most anyone's ability to use English correctly.

Reply Like Like You like this
affiliatesun Premium
I browsed through the course. I will be back to it with a note book to take notes in details. I can tell that this is an A+ course. Very well structured, easy to understand, followed by helpful exercises. Highly recommended for everyone who can benefit from it, specially ESL (English as a Second Language) speakers, as it is called in the U.S.

Reply Like Like You like this
Fernan Premium
Thanks Mehdi, you made my day. I put long hours, but I think it will be worth it.

Migrants coming to Australia after WW2 attended English Language classes. They often struggled with pronunciation of strange new words. One such student was walking past a theatre, where he saw a large banner:

"Pygmalion - pronounced Success!"
He promptly threw himself under a bus...

Your course is a very comprehensive one - well done!
:) george 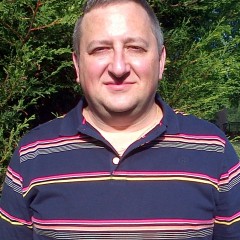