Good morning, afternoon, or evening to everyone!

Since I've lived in Florida for 35+ years I've witnessed a ton of wildlife pretty much daily. There's something about watching the creatures that inhabit this earth, it's enjoyable!

For most of my life, I've been avid fishing, hunting, boating, and camping, as an enthusiast.

I don't fish or go boating as often as I once did, but whenever I do go, it's always a good time. Between things I've run across and the things I've caught fishing, I've seen some scary stuff!

There's nothing like being in a small Jon boat and having a set of gator eyes looking at you.

Most of the time nature's creatures won't mess with you but when provoked they may attack. That happened to me once while fishing a freshwater canal, I overshot my cast and hit a dock.

A huge snake was sunning on the dock right where my sinker crashed and he got pissed.

We had engine trouble and floated along with one paddle fishing the way back to the launch. The snake launched straight in our direction into the canal and headed right at us.

I never paddled so hard in my life and I didn't stop until we got back to the boat launch. 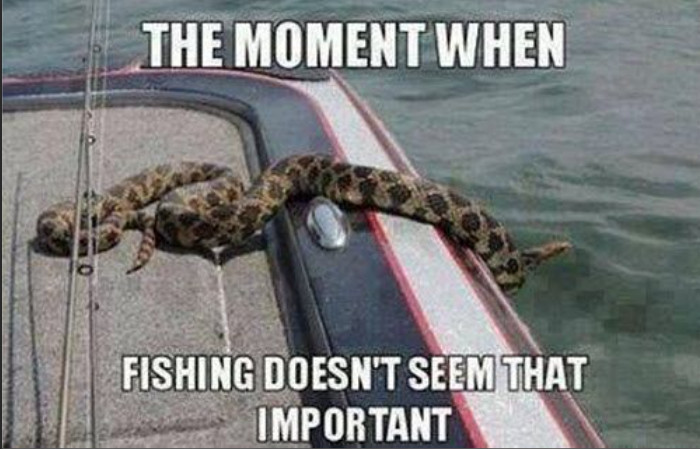 Thinking of a big pissed-off water mocassin slithering in my boat probably set a speed record! Fishing is the reason I quit going in the ocean, it's full of critters you don't want to encounter.

I've been bit by fish, stung by jellyfish, bumped by small sharks, and pinched by crab claws! Once I almost stepped on a horseshoe crab, it was burrowed under the sand tail spike up.

Experiencing nature's core is a one on one connection and it's how I disconnect being online.

Around these parts, I see something almost every day, even if I'm just taking a quick drive. There are usually deer or other critters that frequent this area because I'm somewhat rural.

For instance, the below image is a set of Whooping Cranes that visit my yard weekly, it's crazy! They are incredibly loud and are fairly good-sized birds that are not intimidated by people. 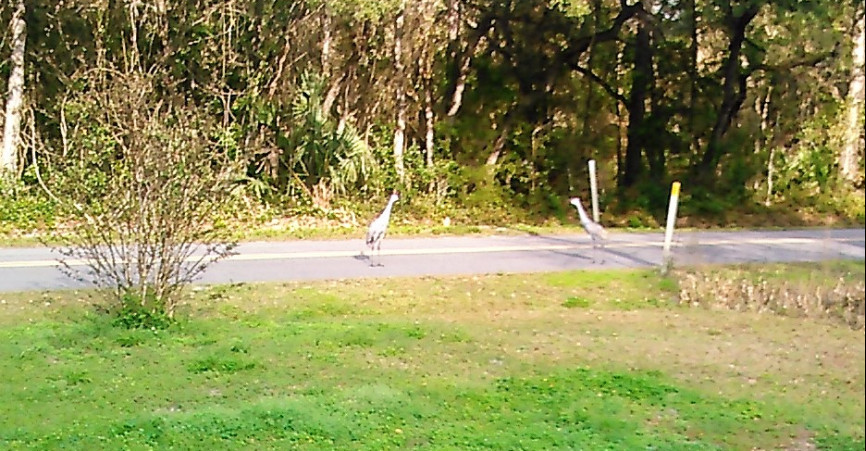 When I opened my door to take the pictures they came into my yard as seen in this image.

Almost every morning several hawks hang in my yard, and they hunt for their food. They sit upon the utility lines watching the ground, some days it's on my yard fence posts.

This Hawk pic was taken from inside the house through my office window a few days back.

It's hard to see as it was a distance away from the window, my van is in the original picture.

I've watched these Hawks pounce and fly off with snakes or mice many times over the years! Here's another of a Wild Turkey behind my old house only feet away just outside my back door.

The abundance of wildlife around me is plentiful, just down my road is Rice Conservation. Florida Water Management is also nearby who protects the environment from various things.

When the weather warms a little I'm planning another excursion for a few days of fishing again. Hopefully, getting a line in the water while camping out on the St. John's river with my boat.

Hope you all have a fantastic weekend!

Write something…
Recent messages
Debbi26 Premium Plus
I enjoyed living in FL. Can't say I kayaked a lot but I have friends that love to kayak with the gators. NOT me!!!! I did do a lot of hiking but with groups. You never know what you'll encounter out there. I lived in the Panhandle twice and was considering going back but we'll see.

Reply Like Like You like this
webcash2us Premium Plus
@Debbi26
I've explored much of the state of Florida from the Keys to the panhandle, it's always an adventure. There was a time I did a lot of work for chain businesses with many locations.

That had me statewide which beat sitting in South Florida traffic.

I have friends that kayaked in the waters too, in the Peace River.

Around here they have huge fishing tournaments on St. Johns. The Bassmasters tournament has been held here so many times.

You are so right, you never know what you'll encounter out there.

Reply Like Like You like this
FKelso Premium Plus
I, too, enjoy watching wildlife, though if they are large, such as a bear, I like to be in a safe space. Gator eyes watching me? I don't think so. Nor do I like the idea of poisonous snakes, or any snakes, for that matter. That's another reason I like Alaska -- we have no snakes.

The bears here are nowhere near the size of bears in Alaska.
Bears are still a nuisance to many around me here though.

We have wild hogs, snakes, and a million other critters in FL.

Gators don't bother me so much, with Crocs I'd be running away. Snakes on the other hand will make me set land speed records.

Not long ago I caught a baby rattlesnake on one of my job sites.
I gave it to the homeowner in a 5-gallon bucket with a lid on it.

I couldn't work knowing it was there, it had to go, they flipped out. Mostly because I found it right next to the front door under bushes.

I keep an eye out for things, but sometimes it's unavoidable.
Like accidentally stepping in a Fire Ant mound...lol

we have been in southern Florida a bit over 2 years. Lots of incredible wildlife. But tonight we will be watching for falling iguana. Low 33. Very rare to be that cold way down here.

Reply Like Like You like this
webcash2us Premium Plus
@Steadfast1
Yes, it is rare to be that cold, but I remember a few times.
I lived in the Fort Lauderdale area for over 20 years.
Tonight low here in North FL for me is 26, it's cold.
Watch out, those Iguanas get big down there...lol

Reply Like Like You like this
Chris2005 Premium Plus
I did a few float trips in Florida. The water was so dark you could not see your hand in the water. The things you cannot see scare me more than what I seen on the banks looking back at me.
John

Reply Like Like You like this
webcash2us Premium Plus
@Chris2005
I'm with you on that, it's what you can't see that's scary!
When I first moved up to North FL I fished the Suwannee River.

Something huge would strip my reel of its line. I'm talking no fishing pole could reel in these monsters. I found out what they were and I was shocked to hear the answer.

They were Sturgeon that were hundreds of pounds in the Suwannee River and they were dangerous. Many people have been killed by these monsters as they jump and hit them.

If you search Suwannee River Sturgeon attacks you will see.
An FWC officer showed me a sign at the park I was fishing.

Reply Like Like You like this
west2000 Premium
Great pics, John! Nature is the best way to disconnect, I agree. I too enjoy watching all the different critters that exist and FL is one amazing viewing spot.

Reply Like Like You like this
webcash2us Premium Plus
@west2000
I plan to get a newer phone soon for taking better pictures.
Maybe do more wildlife posts in the future, I enjoy doing them.
There is a ton of places all very near to me for exploring activity.

Reply Like Like You like this
west2000 Premium
@webcash2us
That would be great to see and hear about. When I lived in FL I used to really enjoy all the wildlife areas. So many birds and amazing animals. I'm sure you must enjoy that!