WOW I Have Never Been So Entertained!

Anyone that read my scam story is going to love how this is all playing out right now.

I have kept my scammer on the hook, he thought I had deposited a second check to rip me off even more, that check never showed up, but he didn't know hahahaha.

Then he sent me two more checks, of which I am sending to the FBI or someone to get finger prints, I have not even opened the envelope.

This morning I let him know what my real intentions for his checks are, boy is he ever mad at me lol.

He had the audacity to tell me I screwed him out of his hard-earned money, my blood boiled a little, and I let him have it!

Then he proceeds to tell me that he was planning to ask me to marry him because he likes me so much, I puked a little in my mouth to be honest.

Right this second, he is promising to clear all the charges at my bank, and told me to trust him! What a joke! I am going to guess that his next text will ask me for my bank, account number, and routing, thinking I will be dumb enough to give it out.

This guy, Eddy Fergus, or whatever his real name is, is just a piece of work I tell you! I cannot believe he kept texting me after I told him I sent the checks to the FBI for finger printing. He sent me this photo saying it was him, and is now going to video chat with me.

This probably isn't really him, so I can't get too excited about catching him anytime soon. I do plan on Google searching his photo though.

I am going to keep writing while I talk with this guy, if he calls that is.

He sent a text asking how much I have in my bank account right now lol, and wants pictures of my truck? But still no video chat lol, I truly do not expect it, but it was worth a shot lol.

Now he is trying to get me to go to Wal Mart and buy a Vanilla prepaid Visa/MasterCard, so far no dollar amount, but he expects me to use my own cash on this because the Feds have his checks lol.

I wish I could live feed my texts with him! That would be the best, we could all be entertained as much as I am now! 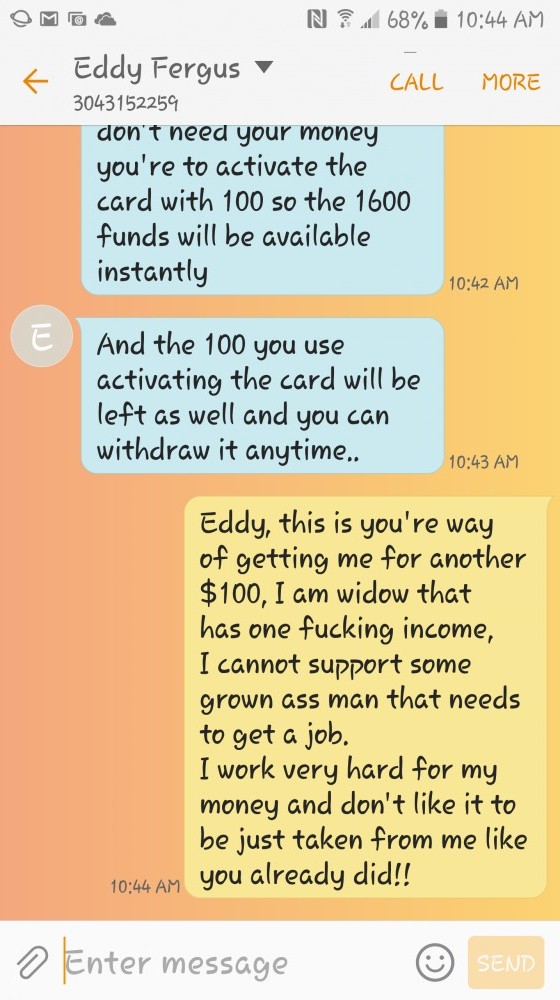 This is the last message I sent to him lol, as close as I can get to a live feed.

His response is "No, Stacie I'm not lying to you I want to pay you because you're a widow and I know how you feel"

I have to add the next screenshot, because this is just too funny not to. 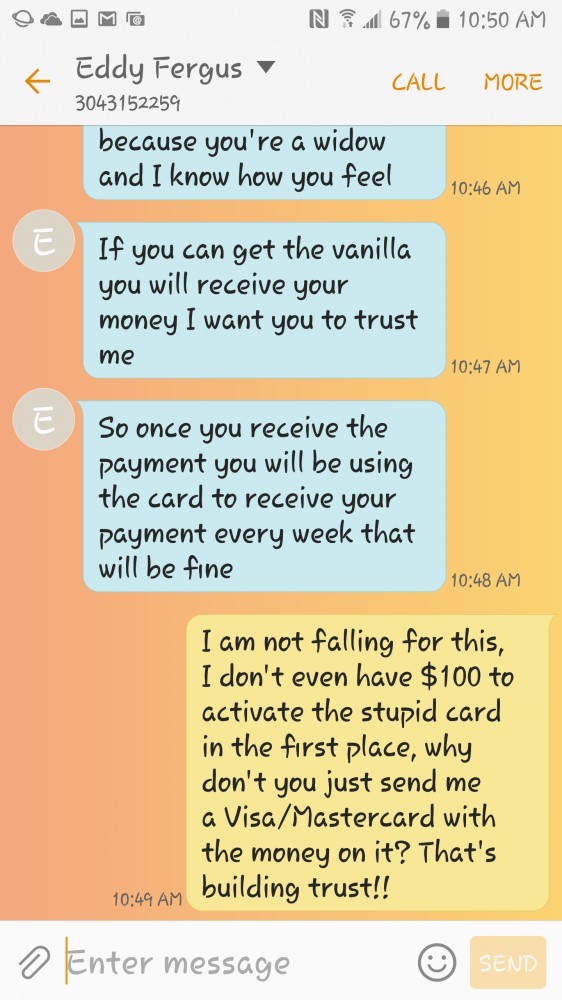 Okay, so I will keep updating in the comments, I knew he would never video chat with me. But I wanted to share our conversation so far.

He claims he does not need the card number, just a picture of the front and back and my receipt as well, like I am that stupid. 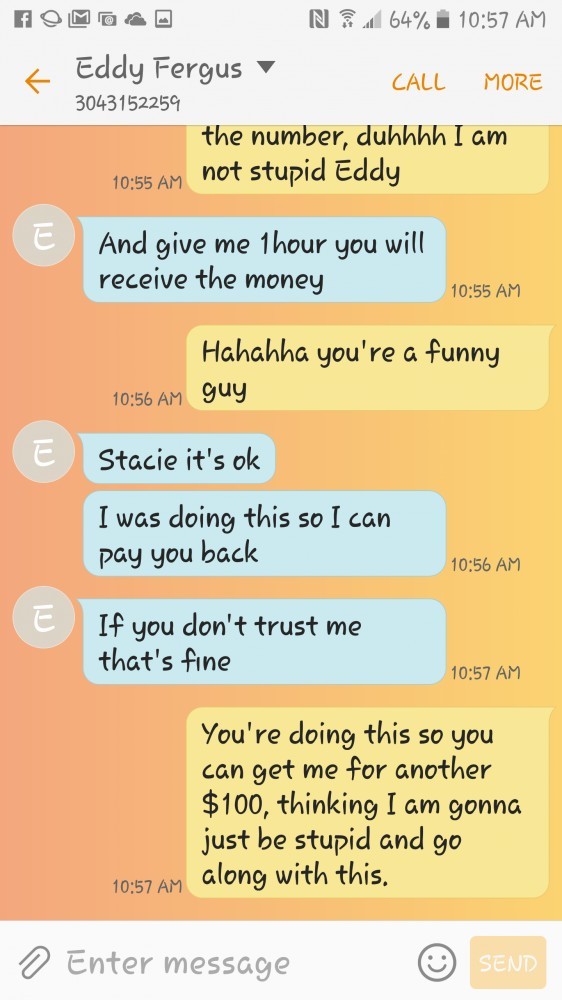 I think he is done with me now, I am not cooperating anymore lol.

I really wanted to share the conversation though, so I hope everyone enjoys the read on this one. I had fun getting some revenge on him.

I toyed with him for about 2 weeks, just wasting his time! I don't feel like I wasted mine, hopefully I distracted him from scamming someone else for at least a day or two.

Write something…
Recent messages
DebbieRose Premium
Careful...I have been told it's best not to engage spammers. Report them and ignore them.

Reply Like Like You like this
sfortson Premium
@DebbieRose
Thanks for the advice, but I had to get him to send me those checks, now that I have them, and a possible photo as well, I am done with him.
Stacie

Reply Like Like You like this
sfortson Premium
@LauraFuller
I totally agree! I am glad I got him to send me the other checks though! Hopefully he messed up and left some finger prints on them.
Stacie

Reply Like Like You like this
free4life Premium
@LauraFuller
LOL HAHAHA, Laura, you said douche bag. LOL Yes, the guy certainly seems to be a giant douche monger.

I am sorry for you Stacie. I too have gotten checks like this in the mail, too bad that there are so many dirtbags out there.

Thank you for sharing your experience with this situation, it has been rough to bounce back financially, but I am starting to get out of debt little by little.

Reply Like Like You like this
DonnieNorton Premium
Great post Stacie, I needed a laugh today. I am so glad you sent his envelopes to the FBI. This fu@#er needs a good ass whipping as well as jail time. All the best
Donnie

Reply Like Like You like this
sfortson Premium
@DonnieNorton
Donnie,
I had great fun with him that is for sure! I am glad you found the entertainment factor here as well.
I hope the FBI actually does something about this too! Stopping him is my goal for sure!
Stacie

Reply Like Like You like this
sfortson Premium
@lesabre
I actually kept him on the hook on purpose, I wanted to get as much information from him as possible, even knowing most of it was fake, but now I am done with him lol, I got him to send me the checks for finger prints, that was my goal.

Now I will block him.
Stacie 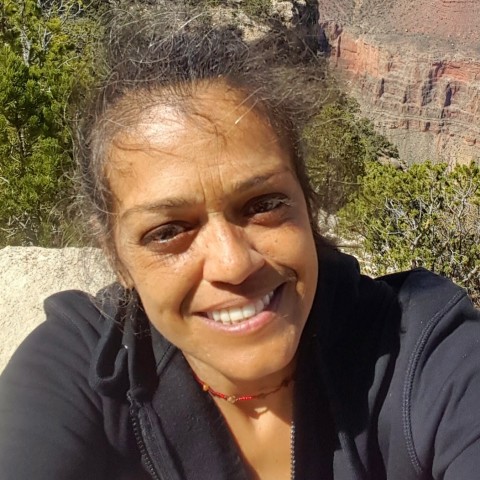 1Year
View sfortson Profile
Follow sfortson
Sfortson's Posts
18 posts
View all
I Got My New Computer And I love...
60 comments 37 likes
My Dinosaur is Getting Old I Am ...
50 comments 24 likes
Scammer be ware
102 comments 51 likes
Four Months With Wealthy Affilia...
48 comments 44 likes
Google + Is Still Worthy Of Your...
22 comments 12 likes
I Now Know The Excitement of The...
87 comments 63 likes
Employee Party Turned Great!
23 comments 16 likes
Site Comments Are Aggrivating Me
83 comments 26 likes
WOW I Have Never Been So Enterta...
21 comments 13 likes
Feeling Really Ashamed, But Keep...
152 comments 63 likes
Hold Tight!