What Am I Doing Wrong With My Email Campaign Setup?

I can't remember if we can post images in the question section so I'm going to post it as a blog first.

I've worked pretty hard on this email campaign but it doesn't seem to be working and I was wondering if you could help shed some light on it.

I first realized something was up when the first email was opened 100% of the time but the rest weren't opened at all aka 0% of the time.

So I decided to test it out by subscribing to my email list and found that the campaign cycle wasn't being fulfilled.

Only the first email is being sent and nothing further. Have I done something wrong with the setup? (image is below)

Now I feel terrible because people are subbing to my list and not getting what they expect when they sign-up.

So I took a screen shot of my setup and wanted to know if I had something setup incorrectly? 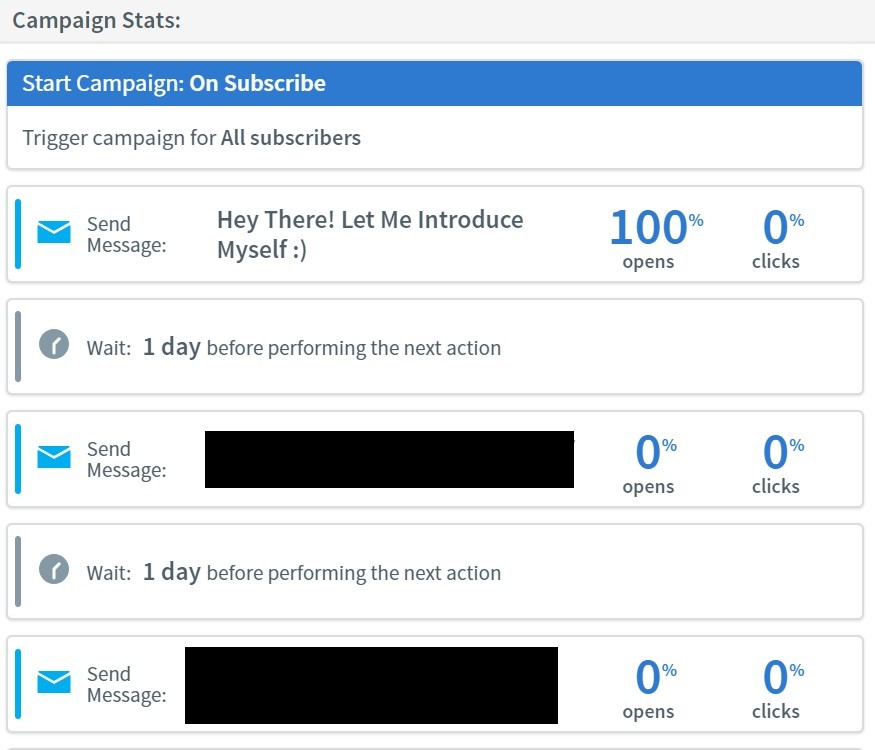 I've been avoiding learning email marketing like the plague because its something new, lol. So I'm trying to figure this out before I don't have anymore fingernails left, haha!

If you have any input I would be open to suggestions but as always please be kind :)

Write something…
Recent messages
Kerjackie Premium
Hello, Marlinda, I think you have found some suggestions from great members, I am planning as well to learn email marketing, and hopefully learn from your experience.
Have a great week
Jacqueline

I would say that it has to be an issue on your autoresponders end.

It's nearly impossible to have a 100% open rate on your first email, even if it's sent immediately, so I'd contact them right away.

So I don't know your auto-responder very well but I think it might be the way you have setup the actions. Should it not be one day after performing the action. Being the action was sending out the first email.

I'm sure it's in the actions might help to take a tutorial on setting up the email sequences.

Also You can do email blast with the emails they have missed. Just after you fix it send out an email blast to those who haven't received the prior messages.

Reply Like Like You like this
MarionBlack Premium
Maybe it's not that you are doing anything wrong but that your choice of email management is not doing something right. Try MailPoet.

Reply Like Like You like this
Rainfalls Premium
Hi Marlinda thanks for asking the question. I can learn from the answers as well. Great that you are pushing through in an uncomfortable way. Championship stuff.

I have not dug deep into emails programs myself except for Constant Contact.It is great to test it out yourself. Great job in that as well.

But one important question one may ask to help you is what Plug in are you using for your email program?