Are you struggling to make money online? Is the $49/mo fee starting to take its toll on your finances?

You don't want to quit but you're trying to figure out how to make money for Wealthy Affiliate.

Do you wish that you could afford yearly subscription which breaksdown to $29/mo but you have NO CLUE how you're going to cough up all that money when you're barely struggling to scrape together $49?

Yup, just snap your fingers and BAM you're a yearly memeber. If you're like me, even the Black Friday deal seems like an impossible feet.

When I first started I was broke. Broke as a joke. As a matter of fact I was worse off cuz my bank account numbers tended to be red

I'm all into colorful expressions but usually that's not a good thing when it comes to finance.

Well I had to scrape together my money to make the fee. The good thing for YOU is that with a little sweat equity and smarts, you can get it for FREE!

Before we get started let me get one thing straight. This isn't a fall in your lap system.

You're going to have to do something but now money isn't the issue.

What I really like about this community is the emphasis on giving back to the community. What I love even more is that you get rewarded hadnsomely for your work.

I recorded a training video before about how you can get free domains on Wealthy Affiliate. Now that I know this technique of getting my subscription for free I wonder why I never thought of it before.

So I'm not really sure how long this has been available to us but the important thing is that now we know that going forward, its available to us, lol!

Once you achieve your comment certification after making 50 comments, you get $0.50 every other comment. You can make this work in two ways.

By making $0.50/comment, you will have your subscription costs covered after 98 comments.

Now you're probably like WHOA THAT'S A LOT OF COMMENTS. I can't do that!

Oh no its not and yes you CaAaAaAannn!

Lets use the shortest month of the year, February, as our example. No leap year. Just the regular 28 days.

If you only did 3.5 paid comments per day, that will get you your subscription money. There's just one catch.

You make the $0.50 every other comment so you would actually have to do 7 comments.

One way or the other that is more doable right?

That's how you have to breakdown big tasks sometimes. You will realize they're not as big as they may initially seem to be.

Now this one right here is my real secret to make money for Wealthy Affiliate. Because there is no money involved at all.

Using the same system, you can do the same amount of comments and pay for your subscription with your cash credits right within the Wealthy Affiliate platform! 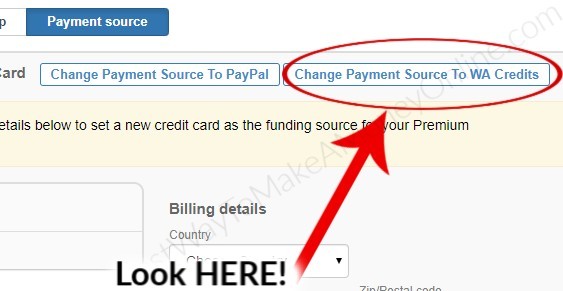 So in other words, with a little work, YOU can essentially get WA for FREE.

So in the beginning especially, stick with comments.

Hopefully this has helped you see why affordability is no longer an excuse. I KNOW the next one that's going to come up.

While it might not be as busy as it once was, its not that dead to where you can't get 7 credits per day. Some days are busier than others but again, it is still VERY POSSIBLE to get 7 and even more than that per day.

Don't spam or anything like that either. And don't just put up lousy comments thinking that this is some sort of get money quick scheme.

You can read more about what Kyle has to say here but to get to the point, you will be banned altogether. That's not ideal so don't even try to say I told you to do that crap either.

The comments don't have to be long but they do have to add value to the requester's posts.

Now that you know this, I want you to make the commitment to write at least 7 comments per day. Remember, this is for February so you'll be making a little extra each month.

You'd be surprised how those extra dollars add up. Some days you might even want to do more.

You can do the same for yearly as well by the way. Commit to writing a certain amount of comments per day and you'll have your yearly credits in no time!

I hope this info has been helpful. If you have any questions comments or other feedback, please feel free to leave them in the comments box below.

PS. Click here to see how you can get free REAL domains in WA

Write something…
Recent messages
phakacha8 Premium
Hey Marlinda, Great post. Need to check out what you're chiming here. I've got to harmonize things up henceforth.

Reply Like Like You like this
Marlinda1 Premium Plus
@phakacha8
lol, glad you enjoyed it and hope you can make it work for you too :) Thanks for reading and hope you have a good day also.

Reply Like Like You like this
FKelso Premium
Very good that you pointed this out, Marlinda. I know a lot of people struggle with the monthly fee. Giving comments is a way of helping others so you can help yourself.

Reply Like Like You like this
Marlinda1 Premium Plus
@FKelso
I'm glad you found this info helpful. Yes, I have also struggled to make the fee too so I know the feeling. Hopefully, this helps a lot of people make the subscription money :)

Thanks for the post. I would love to be able to do 7 comments per day but for me time is in short supply and it takes me at times awhile to put together a good comment.

Add to the fact that when I am available to leave comments usually there have not been any to leave sites asking for comments on it makes reaching 7 nearly impossible. Kyle said he is going to work on this issue so I am waiting to see how that plays out.

Reply Like Like You like this
Marlinda1 Premium Plus
@Jody4
I can understand what you are saying about time. We're ALL busy. I have a 4 year old driving me crazy while running a business and everyone thinks I'm the housemaid, coffer, cook and more!

That's y I said COMMIT to it. All it takes is a quick check here and there on your phone.

Yeah I get the same thing too but I get 20 done in a day. Some days are faster than others but you have to figure out how you ARE going to do it instead of dwelling on the problem(s).

They're not going anywhere and there's ALWAYS going to be something.

I would suggest that that you check on different days at different times to see when comment requests pick up. Sure it's dead but not always.

Reply Like Like You like this
Tirolith Premium
When you are on Facebook to stay up the top you need a lot of comments coming in and responding as well. F/B needs to keep the action happening. No action then F/B takes it out. Commenting is teamwork. Teamwork helps all to keep motivated and improves our opinions and success follows.
Tom.

Reply Like Like You like this
JonLake Premium
But you are not able to cash in your efforts until you reach and keep an upgrade to Premium percentage of 5% from your referrals. For many, us included, that seems to be rather difficult so far!,

Reply Like Like You like this
JonLake Premium
@Marlinda1
Maybe you have to get past the 5 premium referrals and get the email from the team that you are an active affiliate before it becomes unlocked? We are on 4 so far and we have no way of cashing in the credits we have amassed as they are all greyed out.

No doubt I will have an answer to that when we eventually get our 5th!

Reply Like Like You like this
Marlinda1 Premium Plus
@JonLake
Oh, I think you are looking at the wrong credits. These aren't affiliate credits that I'm talking about, they're cash credits.

Its the left side on the credits screen. You see the bar that you can purchase credits? The bar under that shows you how much you can cash out.

Before you can get cash credits from commenting you have to become a certified commenter. To do that you have to write 50 comments and not drop under a 80% rejection rate (I think).

You can also create training. You get cash credits when your training levels up.

Hope this helps and makes sense :)

Look at this training to see what I'm talking about: How To Get A Domain For Free In WA

Reply Like Like You like this
JonLake Premium
@Marlinda1
Ahh! Thank you. I have just done that and will now be getting paid by WA on the 1st June. Happy days!
I had stopped doing training because I thought that I couldn't cash out, so now I will continue creating trainings.

Thank you, you have just made my day.
Have a wonderful weekend.