On this day in history in 1951, the US Census Bureau received the first UNIVAC 1 Computer, with a signed contract, to process its data. This immensely helped the tabulation process because the UNIVAC was capable of processing 4,000 items per minute.

Necessity Is The Mother Of Invention

But to get to this point the US Census Bureau experienced a rocky road. Before the 1870’s the counting was done by hand and experienced much inaccuracy and over run budgets. By 1890 the Bureau realized doing another census manually was impossible. Herman Hollerith, a former Census Bureau Employee, knew he had a solution so offered his fleet of Hollerith tabulators on a leased contract. Theses tabulators were an improvement because the job was finished months ahead of schedule and far under budget.

But then another problem surfaced. Hollerith raised the leasing cost. In fact he priced himself out of the market. So James Legrand Powers, a Census Bureau employee, took the matter into his own hands and developed a new electric tabulation machine. 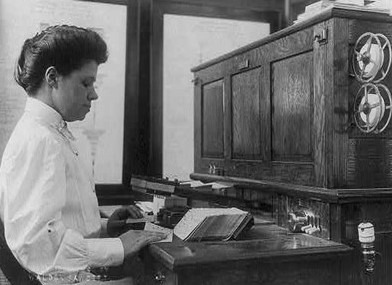 The new electric tabulator, with an automatic feeder and card sorter, was a big improvement over the machines that Hollerith was offering. But Powers soon realized his invention was a gold mine. He left the Census Bureau in 1911 and created his own company which later became part of the Remington Rand Corporation.

So that brings us to the late 1940’s when J. Presper Eckert and John W. Mauchly developed the UNIVAC I. The UNIVAC marked a major improvement in data processing, and as mentioned above, the 1950 decennial census was tabulated at 4,000 items per minute. This was double the amount that Powers tabulating machines could process.

By the 2000’s optical character scanners were used to process returned questionnaires. The scanners recognized hand-written responses, as well as filled-in ovals or boxes. The scanned images were processed and translated into American Standard Code for Information Interchange (ASCII). These responses were then transmitted electronically over secure lines to the Census Bureau headquarters for statistical processing and analysis.

By 2020 many in the US residence entered their own data online. This really eliminated some processing time. Since the census just happened, limited data is available regarding the processing details.

All Industries Change Over Time

So What Do You Think About Your Affiliate Niche?

Write something…
Recent messages
FKelso Premium
Yep, change is inevitable. We have all seen so many huge changes in our lifetimes. I do hope I'll still have a website in 10 years. That's a lot of writing to do between now and then, but it would be worth it.

Reply Like Like You like this
jghwebbrand Premium
@FKelso
We certainly have seen a lot of changes. Yes, never thought about it. But 10 years of online writing is a LOT of writing.

Have a good day.

Reply Like Like You like this
Temilol Premium
Change is indisputable: I will want to say few years to now and with development of Machine learning: I foresee AI taken over lots of thing though.
If still in online business you would have become the pool of knowledge machine is going to draw contents from to educate searchers in your niche.
And if you still keep growing your business, your site can become a go to for self education and development for as many that want to pursue career related to your niche.
WA can by then be an higher citadel of learning a go to for degree course in Affiliate marketing I mean many of the contents created will become course of study.
May be or May be not just free styling taught as it is coming off hand. However one thing stand sure if you still in business sure you would have become giant strides... God only' knows morrow.

Reply Like Like You like this
jghwebbrand Premium
@RogerMackley
What is so very interesting is that some of these pioneers came from other countries and brought such great minds with them.

Some people certainly have a lot in intelligence.

Reply Like Like You like this
drjec Premium
This is another interesting article. When you write about it, it sounds like such an easy accomplishment. I can't even imagine the conceptualization, tooling, testing, manufacturing that went into those early machine.

Reply Like Like You like this
jghwebbrand Premium
@drjec
Yes, it took many sleepless nights and most of these inventions are years of hard work. So many of them after all of their hard work even went bankrupt even after they started as a very promising venture..