If you missed Part I go here,

I read “Think And Grow Rich” by Napolean Hill in HIgh School. Nobody else was reading it, it was not an assigned book. Nobody in my school read books you didn’t have to, I had to read it, for me. I wanted to be rich. I wanted to be a leader. 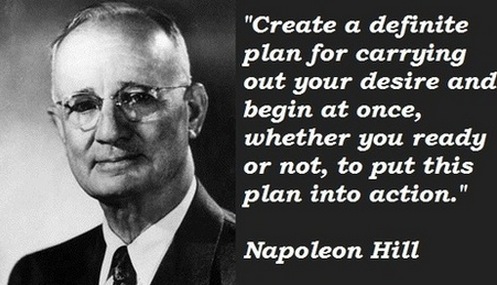 I was in my teens, when I got into the vending machine business. Back then ‘the boys’ handled all of the vending machines, In NYC. When the church wanted a soda machine for the ‘teen club’ the priest had to go to my boss, “Bullets”. That’s what everybody called him, and with a great deal of respect. I worked in this huge garage, where they stored the machines. I pushed a broom.

Everybody was in silk suits and drove a Caddy. Not me. ‘Bullets’ and the boys, were always going to the track and running on these errands. You didn’t want to ask. One day they’re all leaving, and ‘Bullets’ tells me, “You’re in charge!” I look around, but I don’t bother to ask, “In charge of what?” They leave, I’m there by myself.

The phone rings, I pick it up. This guy wants to order three vending machines. I take down his name, number and write the order. When they boys gets back ‘Bullets’ goes, “What’s this?” I say, “It’s an order for three machines”. ‘Bullets’, says, “Hey kid, do you see these machines anywhere?” I said, “No”. He goes, “Why take the order?” I said, “Can you get ‘em?” ‘Bullets’ goes, “Yeah, I can get anything!” I said, ‘Great, get ‘em”.

‘Bullets’, nods his head and walks away. His second in command ‘Beansy’, grabs me by the neck and tells me, “You got away with it that time. You’re a wise guy, and Bullets don’t like wise guys. You should know, Bullets doesn’t fire people, he fires at people, and he’s so damn close, he never misses… Kabish?” I did. Since that day I’ve never feared being fired, I was from my teens what they call in Poker on a “Freeroll”. 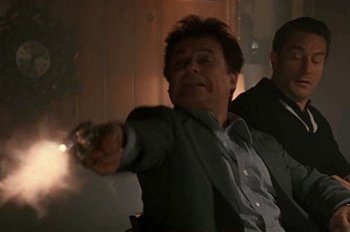 Do you know who Spider was in “Goodfellows” that could have been me. What has this got to do with Sales? I learned you can get more with a kind word and a gun, then you can with just a kind word. ;^)

So, back to when I was still in Real Estate, learning from some greats, reading everything I could about Sales. Joe Gerrard, Zig Zigler, Ogg Mandino... My broker books the whole office to go to a Tom Hopkins Real Estate seminar. I couldn’t wait to go, the whole office was like Christmas was coming early. We get there the place is packed. They hand out this Training Package, I’m on the first page and my mind is blown.


The lights go down, the curtain open to reveal a giant American flag. 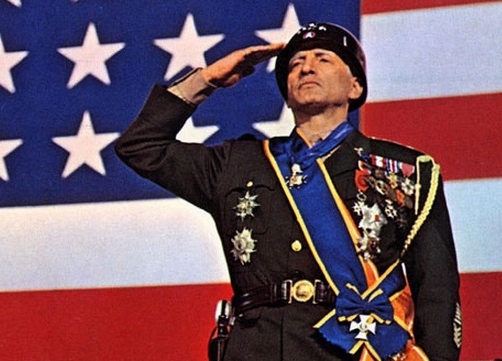 out walks Tom Hopkins dressed like Gen George Patton. You get the feeling this was not going to be subtle, and it wasn’t. It was intense. I became a huge Tom Hopkins fan. I never got to see him in person again, but it sure was worth it. The training manual alone was worth the price of admission. I know I have it somewhere.

Toward the end of the 80’s I was doing conversion properties. My partner Jean and I 'sold' all the apartments in one building in a weekend. It was fish in a barrel, not a lot of sales skills needed, but the money was outstanding. Then the city passed an anti-warehousing bill on apartments, and that kind of killed the conversion deal. If they hadn’t I would have been set for life.

The whole real estate market had changed, the money was harder. I went looking for greener pastures. I found it in telecommunications, “Alpha-numeric pagers”. We’re talking 1990, there were mobile phones they cost about $1500 and came in a briefcase, and cost $4 a minute. Gordon Gekko had one in “Wall Street” the phone is the size of a brick. 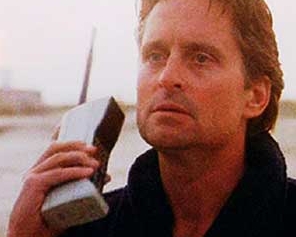 An alphanumeric pager got a full text message on a unit about the size of a pack of cigarettes. The service was so good, the operators sounded like you were calling somebodies office.

Now, you have to imagine no cell phones, the presentation I wrote was, “Is it important for you to get your messages when you’re outside the office or away from your desk?” If you answered “Yes” I had you. What I would do is I’d hand you my business card, and tell you to call my office and leave any message you’d like.

So, they’d call, leave a message, and hang up. Then I’d ask, How many rings before they picked up… “One...maybe two”. Did it sound like you were calling my office? “Yeah, very professional”. Did they read your message back to you? “Yes, she did?” Then I’d reach in my pocket and show you my alphanumeric pager, and ask, “Was that your message?”

I always got the the same reaction I gave when I saw it for the first time. I wanted one, that’s why I started with the company. Within a month I had 15 agents, doing my presentation and blowing away the rest of the country in sales. Fish in a barrel. We had an 85% closing rate. I promised my new agents a 50% closing rate. They were thrilled, I was thrilled. While it lasted. People want to know why I don’t carry a cell phone, any guesses?

My manager at the alphanumeric pager company was named Victor. His background was, he started off selling Encyclopedia Britannica, door to door in Texas. There is no worse job in sales than that. Victor taught me the ‘Bobblehead’ close. Which was a series of 48 questions to a prospect, that had to be answered “Yes” in order for you to continue. The first “No!” and your presentation was over.

Knock, knock, “Excuse me do you live here?” “Do you have kids?” “Do you believe in higher education?” “If I could put a set of Encyclopedia Britannica in your home would you encourage your kids to use them?” “If your kids benefited from them, would you be willing to tell your neighbors?” and on and on for 48 “Yes” answers. The concept is that every “Yes” answer raises the buying temperature of the prospect by 2º. By #48, stick a fork in them because they were done. Like a ‘Bobblehead’ get it? Do you understand why I only ask questions that any normal person would have to answer “Yes” to?

Victor introduced me to Brian Tracy. We would send out messages to the sales team, “Brian Tracy Is Coming” “Brian Tracy Wants To Meet You!” “He’s Almost Here!” He was giving a NYC Sales Seminar, and Vitor said we were all going at $350 a head. I told my 15 agents I was going because I knew it would be well worth it. I had never lied to them, and made them a lot of money so they coughed it up, every one of them.

Brian Tracy, didn’t come out like Tom Hopkins, he didn’t have to. If Tom Hopkins was a ‘Hammer’ Brian was a “Velvet Gloves” I mean smooth. By the first break, my team was ready to burst. I watched as everybody from the seminar run for the payphones. They had to right, no cell phones.

I gathered my crew around me, and I looked over at the bank of phones, and I said. “I wonder how many of them would think it’s important to get their messages when they’re outside the office or away from your desk?” A light didn’t go on… the friggin' Sun exploded, for all of them. They ran to the phones, but not to make a call, but to pay for their seminar. They all did before the first break was over. I don’t think any of them left the bank of phones for Lunch. 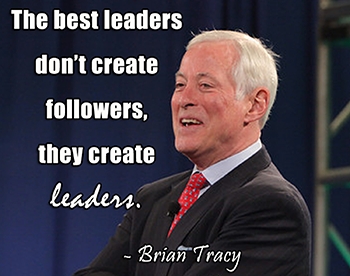 At the end of the seminar, just before we were packing up to leave, there was an announcement. “There’s a table in the back. If anybody feels they did not get their money’s worth from this seminar, you can get a full refund!” There were people that lined up, not one from our office.

What Brian said that day, I can’t tell you in particular, except for maybe “How To Fly A Plane”. But, you can read that in his book “Flight Plan” a great analogy of about motivation, goal setting and getting back on course. Get it.

I’m used to paying for information, an education if you will. I tell people, “You’re going to pay for an education one way or another”. I’ve always tried to put myself in the best market at the right time. But, things change, it seems a lot faster than when I was young. I’ve had a chance to be very rich several times in my life. Making a lot of money before the age of forty is a blessing and a curse.

The blessing is, that you know you’re worth it. The curse is, you think it’ll always be easy and available. I will tell you that’s not always the case. But, as long as you’re above ground, you got a shot. For me a shot is all I need.

If you liked this Please hit the LIKE THIS button, and don’t forget to tip your waitress.... OK? ;^)

Write something…
Recent messages
1sourcebiz Premium
Phil,
you never cease to amaze!!! Comedic, inspirational and genius!! I can't wait to see what you'll have for us next time!!

Reply Like Like You like this
CathyS Premium
Working to add questions that can only have a "yes" answer to my site articles.... good stuff, Phil! God Bless! ~Cathy 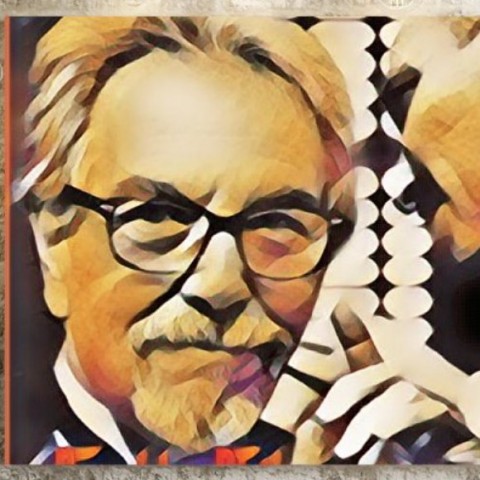