It Is Official - MOBE is a Scam According to the FTC

Thousands of people all over the world were claiming that MOBE, My Online Business Education, was a scam. I even joined MOBE to investigate it on a tip from an acquaintance that it might be a scam. What I found was very misleading, making my scam radar switch on.

Following years of more than 1,000 complaints, the FTC sent one of its own to become a member of MOBE. This undercover investigator discovered many of the scam claims that I and thousands of others have made were indeed true. 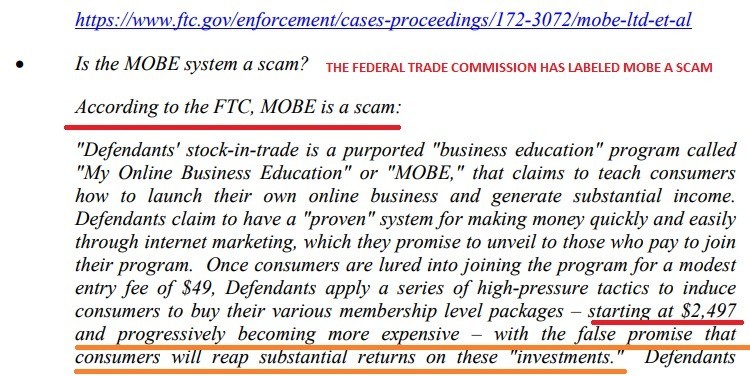 Below are quoted excerpts from the legal U.S. District Court complaint document filed by the FTC, Plaintiff against MOBE, Defendant. I will provide a link to this very lengthy and in depth court document at the end of this post.

"The Federal Trade Commission ("FTC" or "Plaintiff") moves this Court for an ex parte temporary restraining order ("TRO") to immediately halt an internet marketing scam that has deceived and brought devastating losses to consumers nationwide. The amount of monies Defendants have taken from consumers to date through their illegal scheme is staggering-over $125 million."

Anyone who joins MOBE, My Online Business Education, which was formerly called My Online Business Empire, has to take a 21-step program known as MTTB, My Top Tier Business. Leading up to this training you are tricked into believing that this program will single-handedly earn you great wealth. The FTC Investigator reveals the truth.

"The 21-step videos, all of which are narrated by MOBE's founder, Matt Lloyd, are replete with grandiose promises of income and wealth that anyone can attain so long as they purchase the various membership offerings pitched throughout the videos."

"For example, in a sales call in which an FTC Undercover Investigator participated, one of the Defendants' coaches told the consumers on the call that 90 percent of your income will come from Titanium, Platinum,and Diamond conference profits, not your Silver profits."

THE REBRANDING OF A SCAM 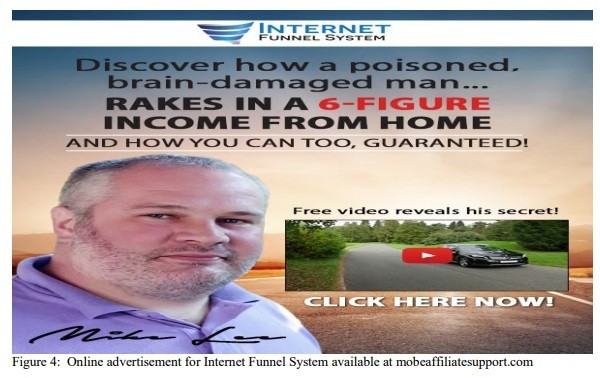 Have you ever noticed that many of these so-called opportunities that operate in the gray area of legitimacy, will always change their names or rebrand their program as something else? Have you noticed that Wealthy Affiliate has NEVER had to change its name or its core training? This is because WA is legit.

This lawsuit filed by the FTC is not just going after Matt Lloyd, who's real name is Matthew Lloyd McPhee, but also two other people who are a part of getting people to join and pay for this illegal scheme. Russell Whitney, Jr. served as MOBE, Ltd.'s Director of Sales and Susan Zanghi. Though she doesn't seem to have an official title, Susan handles the flow of money.

When searching the internet for legitimate ways to make money online, even if you recognize MOBE as being somewhat shady you may not know about the funnel systems that were specifically designed to capture you into MOBE's MTTB 21-step program. Three of these are Internet Funnel System, Patriot Funnel System, and Ultimate Retirement Breakthrough.

THE BIGGER THEY ARE THE HARDER THEY FALL

Will MOBE make a comeback? I seriously doubt it, at least not in its present form. The FTC has some pretty damaging evidence against all that are involved, thanks to the undercover investigator that infilrated MOBE, plus all of the consumer complaints and exposed misleading advertisements and events.

In addition to the MOBE company based out of Malaysia, which is claimed to where Matt Lloyd lives now, the lawsuit is also targeting 8 other MOBE Shell Companies used mainly for the transfering of money from memberships and further advance the scheme in the United States and abroad.

When this FTC Lawsuit was filed on June 5, 2018, a hearing was scheduled for June 26, 2018 to determine if the TRO, Temporary Restraining Order, should be terminated, extended or converted into a preliminary injuction. However, that date has now changed to July 17, 2018 as a request from the Defendants to get a better understanding of the lawsuit.

Whenever I see these high-ticket schemes I always ask myself, I wonder how long it will be before they get caught and shut down? It looks like that time has finally come for MOBE. I feel very sorry for all those members I could not have warned before they got caught in this mess. It does not take thousands of dollars to make thousands in return.

Here at Wealthy Affiliate you will learn the CORRECT WAY TO START A BUSINESS and you do not have to recruit others to do what you are doing nor do you have to spend more than $50.00 per month. Unlike MOBE, at WA you can actually start learning and building for FREE! My Online Business Education may come and go, but WA will still deliver SUCCESS!

Below is the link to the U.S. District Court appointed receiver of all funds and assets of MOBE and its related companies. On this website there are link to the following documents: Initial Notice, Complaint, Temporary Restraining Order, Motion Memo for TRO, Motion to Extend the TRO, and Extension of TRO and Rescheduled Preliminary Injunction Hearing.

Write something…
Recent messages
CandP Premium
Very interesting, Rob! What a relief not to have been duped by this. Thanks for sharing.

Reply Like Like You like this
SashaGrey Premium
One of the biggest scams out there. All they do is pressure you to buy those high level memberships to fill their pockets!

Reply Like Like You like this
jetrbby80316 Premium
This is great info Robert, now we know MOBE is officially a scam. Sorry I just perused through this quickly, I will get back to your cool article later to read all the interesting details.