How a Twitter Trending Hashtag Can Boost Your Sales

Using social media marketing is essential for boosting traffic and eventually conversions to your website and affiliate marketing promotions. I understand that many of you may still be reluctant to get involved with social media but consider this, not all social media is the same.

Even though Facebook is the biggest and most well-known of all social media platforms, it is the most problematic in my opinion. Not only has there been several scandals surrounding Facebook and its owner Mark Zuckerberg, it tends to be a dumping ground for opinions that make people want to avoid it. 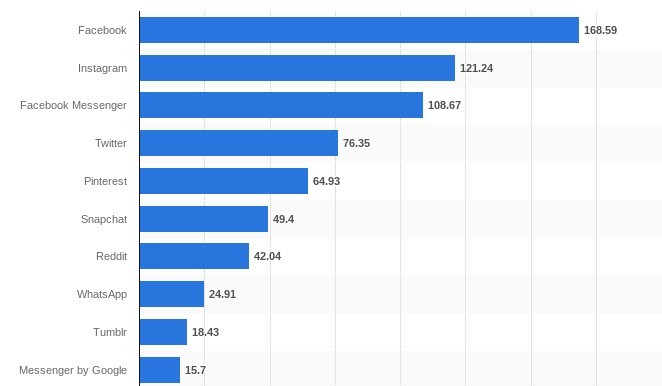 Being the largest social media network, as seen in the above image, Facebook does dominate social media when you consider that the top three shown above and What'sApp in position 8 are all Facebook holdings. I personally have not yet jumped on the Instagram bandwagon yet, and I doubt I will join What'sApp, but I do use Facebook. 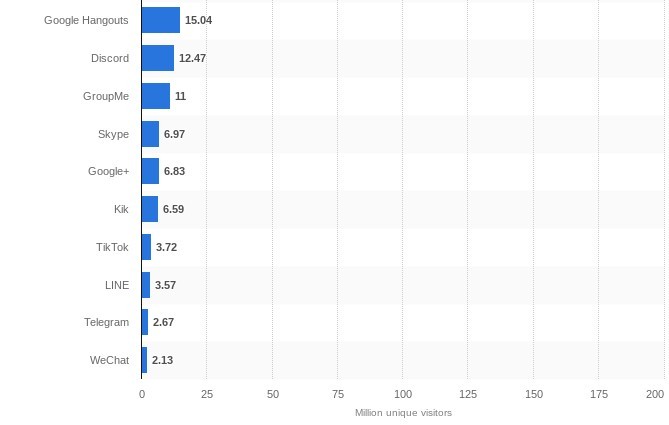 I like the unique aspects of Twitter that Facebook does not have. The short 280 characters of a tweet is one I like and the other is the use of hashtags. Some may claim that 280 characters is too short to compose a message, yet it is 120 characters longer than the meta description for websites in a Google search.

Now almost every other social media network has followed Twitter's lead and use hashtags as a form of keyword for the use of increasing awareness and traffic. I feel that the short tweets, the use of hashtags, and the chronological crawl of the Twitter news feed make Twitter a more attractive option for social media.

As I said above, a hashtag is like a keyword that attracts awareness and traffic. Another feature I like is that during the couse of every day there will be a dozen or more hashtags that are trending. These can be viewed on the Twitter Home Page and on this Trends24 website. Sometimes the hashtags will be fun and creative. 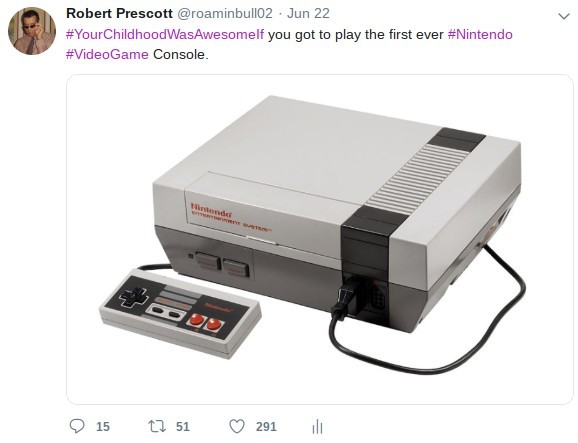 About a week ago I had seen a trending hashtag that was #YourChildhoodWasAwesomeIf. Like I said, some hashtags wil be fun and creative. I started thinking what I could say that used this hashtag and attract people to my tweet and Twitter profile. In the image above you can see what I tweeted including an image.

I also included two other popular (not trending) hashtags of #Nintendo and #VideoGame to help attract traffic.When you click on a hashtag it will show you a page of all tweets with that hashtag and how popular the tweet is. But there is a tracking metric provided for each tweet you post to see how it does.

This tweet about the Nintendo and using the hashtag #YourChildhoodWasAwesomeIf turned out to be my most popuar tweet to date. As seen above I received 25,317 Impressions, 51 Retweets, and 13 Profile Clicks among others. The Profile Clicks were the most important here because it brough exposure to my Twitter profile.

Why is this important? Because I have all of my tweets with affiliate links on my profile. Affiliate links to Wealthy Affiliate, Worldwide Brands Drop Shipping Directory, and Elixinol CBD Hemp Oil. Of those 13 profile clicks I received a spike in 4 sales to my CBD Oil affiliate program. I also received an affiliate link click to WA.

The above image is a Pinned Tweet I have at the top of my Twitter Profile containing my WA affiliate link. Prior to posting the Ninteno video game tweet I had 3 Link Clicks to WA and now I had gained a 4th. The tracking metric of Link Clicks are important for tweets that have affiliate links. This helps you detect what tweets work and which do not.

Profile Clicks are important for tweets that do not contain affiliate links because they detect which tweets are attracting people to your profile. And if your profile has attractive looking tweets with your affiliate links, you may just get a sale or two. The same is true with any social media network where you have links on your profile.

After Twitter I would have to say Pinterest is my second favorite because of its unique visual characteristics. But as of March 2019, Twitter has 76.35 Million Unique Visitors and Pinterst right behind it with 64.93 Million. With Google now indexing Twitter tweets, this social media platform is and has been my favorite.

If you would like to learn more about how to use Twitter to drive traffic to your website and more exposure to your affiliate links, which both Facebook and especially Pinterest do not like, I have created three tutorials on Twitter for Social Media Marketing, see below links. It may seem a bit confusing at first, but it gets much easier as you engage in it.

How To Use Twitter For Social Media Marketing Part 2

Do not let the garbage being posted on Facebook stop you from learning and using other social media networks. If you have a favorite social media network, tell us what it is in the comments below and what about it that you like best. Click here to follow me on Twitter or the link on my WA Profile page.

Write something…
Recent messages
webbsight Premium
Thanks for the Twitter training Rob. Valuable info. Can I use Amazon affiliate links on Twitter? I'm not sure what their policy is on that.

Reply Like Like You like this
boomergp08 Premium
@webbsight
You are welcome Brad. Yes, you can use Amazon affiliate links on Twitter. I do not see why you cannot, since they allow affiliate links from various other sources.

Just make sure not to spam your links and also include links and retweets from other Twitter followers. No one will want to follow you if you do not provide a variety of tweets that are not just your own.

Reply Like Like You like this
MForstner Premium
Thank you Robert for posting "How a Twitter Trending Hashtag Can Boost Your Sales", which couldn't have come at a better time. I'm in the process of launching a product and am working on setting up news feeds and funnels to do so. As you mentioned in your post "It may seem a bit confusing at first",.....yes, it really is but I stare at it for hours everyday and after a while some of the info finally does start to make sense.

But I have found that Twitter out-performs Facebook as far as getting conversions on my links. I think it is because of the less clutter you get in Twitter than you do with Facebook in getting to your target audience.

Reply Like Like You like this
boomergp08 Premium
@Anthonyhu
It may depend on the affiliate link. I know all direct links to WA whether they are affiliate links or not, are banned.

Reply Like Like You like this
Linda103 Premium
Just followed you on Twitter. (Unique Word Art). Twitter is my favourite of the social media platforms and has always brought in sales.
I have spent time and effort growing my followers but there is still a lot I don't know. I knew there were trending tweets but never took the time to find them. I still don't know how to pin a tweet to the top either.
Going to increase my knowledge with your training.
Thank you Rob.

I guess you figured out how to Pin your tweet to the top of your profile page. Good job. I hope my Twitter training helps you.

Reply Like Like You like this
Linda103 Premium
@boomergp08
Thank you, its time consuming but I love creating it. Thank you for the RTs, I tweeted some of yours too. Snap.
I did thank you, from going through your training. Now I know, I will find a better one to pin to the top.
The trining helped thank you. I also have some new hashtags, which is good.
Now I just need to remember to check trending hashtags to use.
Thank you very much.

Reply Like Like You like this
boomergp08 Premium
@Anthonyhu
You are welcome Anthony. I never used to pay too much attention to the trending hashtags either. But when one day I was able to make a trending hashtags fit relevantly into a tweet about my free wholesale drop shipping affiliate program, and I received over 1,000 impressions and 6 link clicks, I started paying more attention to them.