I have been a very happy and satisfied member of Wealthy Affiliate since August 2013. I have made more money online than I did prior to joining and because of the resources available to all premium members, I am able to earn from multiple streams of income.

How many of you who have been here for a year or more, gone into your Private Message Inbox and Outbox and deleted old messages? If you are like me, you probably have some messages still in there from when you first joined WA.

I cannot say for sure how many private messages I have received in my 6+ years here at WA but I can correctly say it has been several hundred. For the last three years, once per year, I go through my inbox and outbox deleting old private messages that I don't want to keep.

Why would keep old messages? Well that depends on what kind of messages they are. For example, I keep all PMs from my WA referrals, both active and inactive members. I also keep some from inactive members that may contain personal contact info. 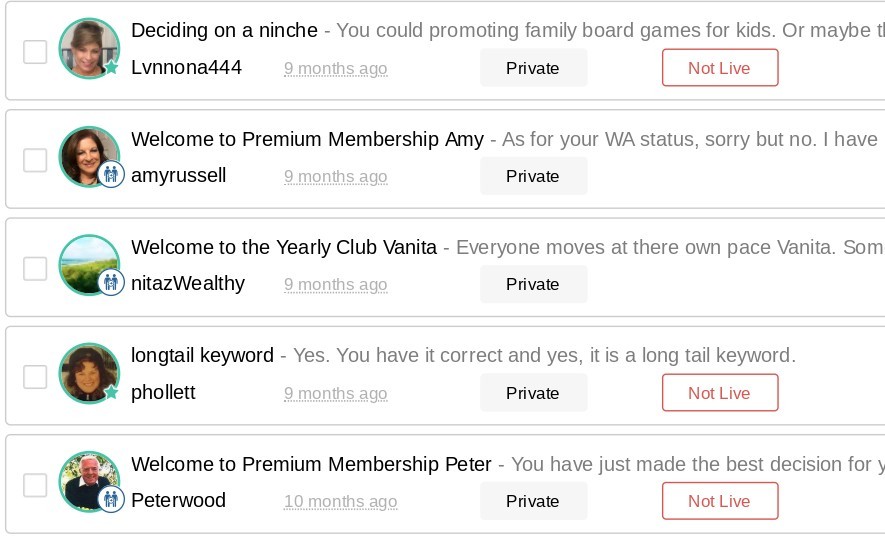 Did you know that your old PMs will show you who has left WA and who is still an active member? As you can see in the above image, those that say "Not Live" are former members who have left WA. Those that have a circle with two people in it are my WA referrals.

In this image we see three former WA premium members have left. Lvnnona444, phollett, and Peterwood (one of my referrals), are no longer active members. Why do people leave? There are many reasons but regardless of what they are, it is hard to say goodbye sometimes.

For those of us who have been here for years, we tend to become cyber friends of many within the community. Some of these friends we become even closer to by following each other on Facebook and/or Twitter. I follow many WA members on social media.

There are several former WA members who I am still in contact with through Facebook and Twitter. Then there are some who are still active members here in WA but only socialize on social media and not within WA. BrooklynPhil is one in particular, see below image. 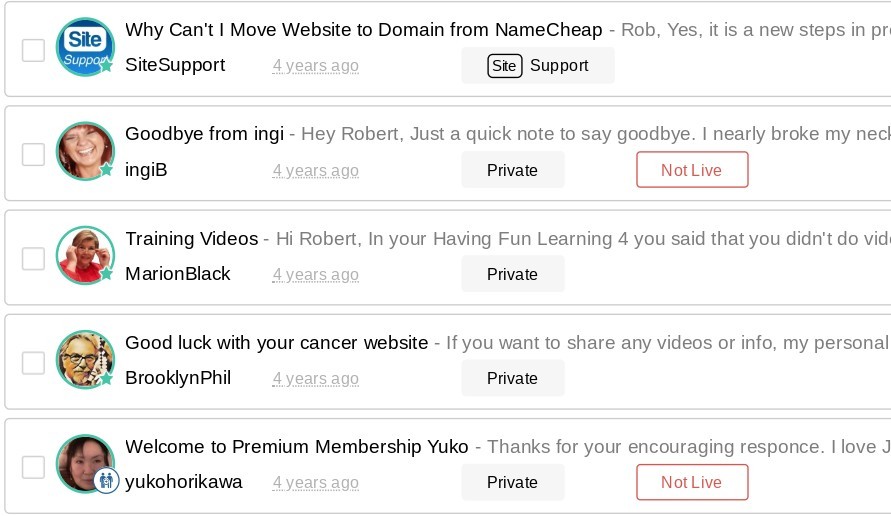 Also in the above image we see another active WA member, the popular video tutorial maker MarionBlack. And who remembers IngiB, the drummer from the all-girl South African band of the 70s and 80s known as Clout? She was a very uplifting soul.

Those of you who plan on being a lifetime member of Wealthy Affiliate will come to realize just how much certain people in this community are like family. As far as I am concerned there are several members both active and not that I would definitely want to meet up with.

We get to know one another through our blogs, our discussions, our Live Chats, and even through social media. If any of you would like to "Friend Me" on Facebook, Twitter and/or LinkedIn, you can find my social media links on my WA Profile page.

Being a long time WA member gives you the opportunity to forge new friendships, even if they are only cyber friends for now or forever. There is one in particular that I miss and I am sure others like MarionBlack, Loes and Andre (apache1) miss him too. 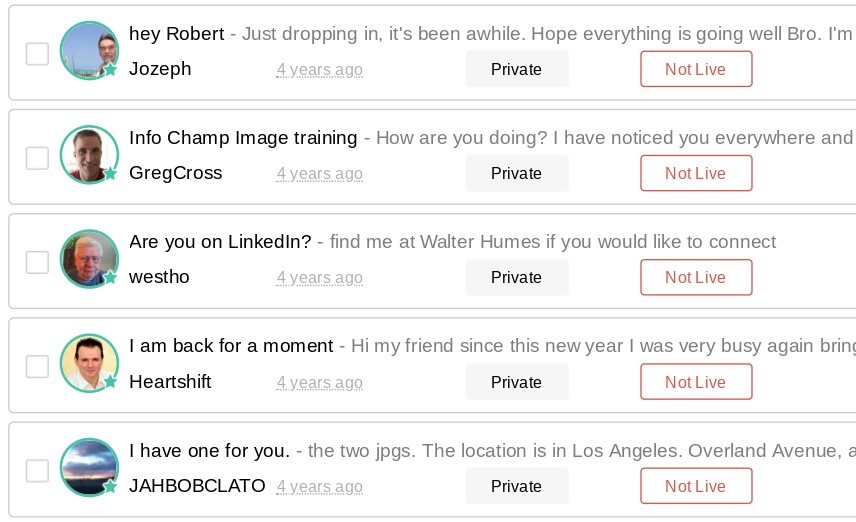 Who remembers Jozeph, also known as Joseph? He took a little time to get used to, a bit rough around the edges. But once you got to know what he did for children and the displaced in the war-torn regions of the Middle East along with his physical disability, you understood.

He not only had the gift of giving to those less fortunate but he was a great writer. Wealthy Affiliate has had many people come into and go out of this vibrant community. For those that I foster a cyber friendship with, I make sure that we are connected in some way outside of WA.

It is hard to say goodbye, even to those who are just cyber friends. It is because of this thought, this feeling of saying goodbye in the cleaning out the house of my past WA private messages, that prompted me to write this blog.

It is hard enough to see many people come and go, especially when you know that the Wealthy Affiliate training REALLY WORKS and that the community is extremely helpful. But everyone has their reasons for leaving and not all are because of failure or quitting. 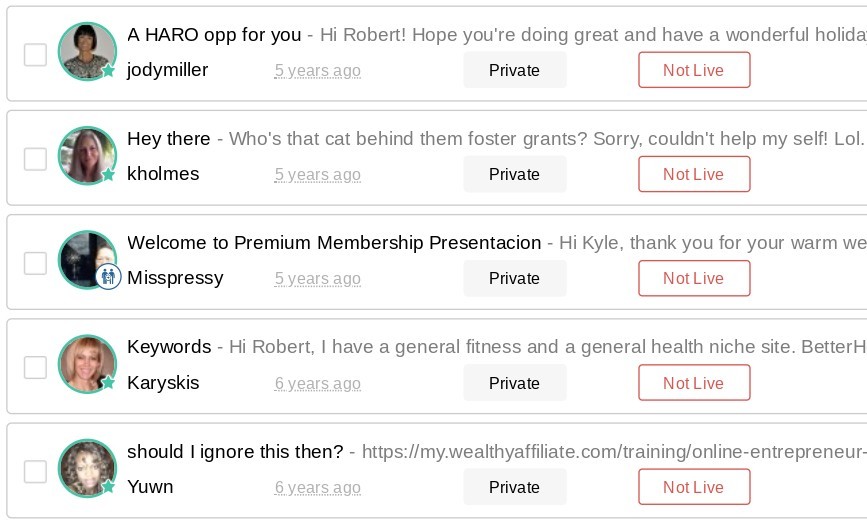 There have been many WA members who came here, took the training, built a successful niche website, and decided to leave and work/grow their business outside of WA. In the image above, who remembers Kary? She has a successful health website about fruit smoothies.

Also in the above image we have JodyMiller who started her website blogging about fashionwear for dogs. Then she took her website to the next level by selling her own creative fashions for dogs. Now Bark and Swagger is a big hit.

There are many former and current WA members who are making lots of money from their websites, affiliate programs and the freelancing of their SEO Content Writing skills. Some who leave WA because their goals have been met, they have a profitable internet business.

Others like myself decide to stay, take advantage of the hosting and extra websites, continuing to contribute to this community and help lift up others. Not everyone leaves WA because they have given up or for lack of funds. So what about you?

Have you looked through and cleaned out your WA Private Message In and Outbox? Have you reached out to the members you follow here by connecting with them through their social media platforms? If you have any comments or questions, please leave them below.

Write something…
Recent messages
accad Premium
Sometimes we have to accept what we cannot control. Now I know that those marked as Not Live are no longer in WA.

Reply Like Like You like this
HeidiAnders3 Premium
What a great post, my friend! Thank you for sharing with us! I'm encouraged even more now...knowing successes of others! I plan on being a lifetime member here...adding to the WA family that's already being woven. Be blessed today and always!!🎊☀️💙

Reply Like Like You like this
boomergp08 Premium
@HeidiAnders3
Thank you Heidi and may you, as well as all others here at WA, be blessed in our endeavors here. It was my pleasure to share these thoughts to further amplify the benefits of the WA platform.

Reply Like Like You like this
Joes946 Premium
A very personal and passionate blog and oh so true. In the going on 2 years I have been at WA, I have met some wonderful friends and count them as family. Yes, I need to clean out my box and try to connect with those who have left for whatever reason.
Thanks for a beautiful post.
Joe

If you feel safe staying in touch with them, having these members follow you on social media is one way to guarantee you stay in touch should they leave WA.