We all want our posts to rank in the search engines especially Google.

Now we know many well-known authority sites normally get ranked up high but many others give up the idea that their posts can't get in the top three positions because our posts are not good enough to compete with them.

THINK AGAIN YOU CAN AND WILL DO IT. 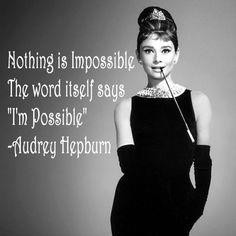 Today I thought I would check some posts in Jaaxy one post in particular.

But I noticed that Jaaxy was a bit behind with their updates which I have noticed a few times lately.

Normally this post does well as it has been in position 2 for the last 30 odd days as you can see in the image below along with the straight line with the dates.

So I found it strange that according to Jaaxy it was not in the first 20 pages of Google today. 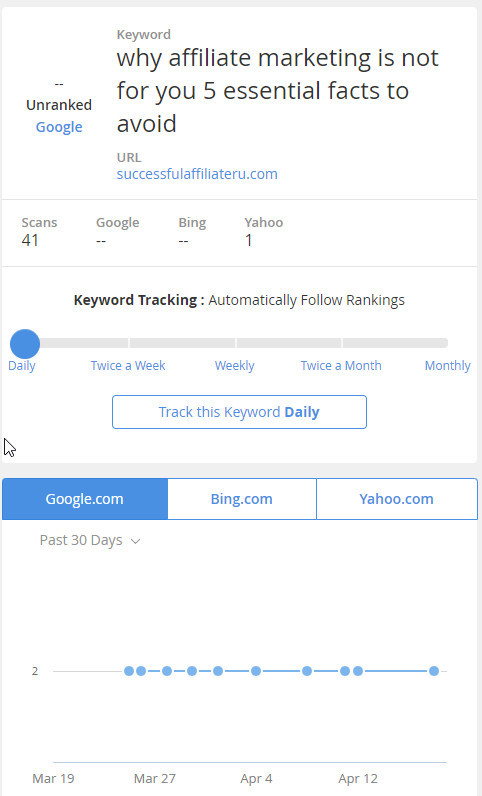 Then I went to incognito mode to double-check and sure enough, it was there but now in position one, and even better look at who is in position two. 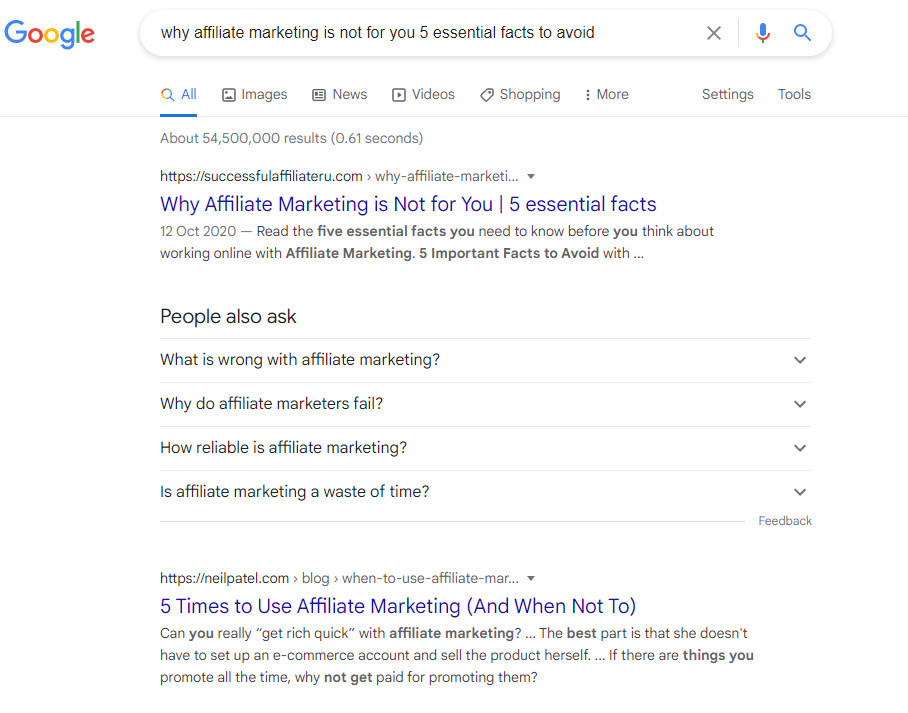 It is none other than Neil Patel we all know how authoritative his sites are but just because he is well known doesn't mean you cant' outrank the big guns.

It doesn't matter how long my post will stay there above Neil Patel but it goes to show and prove that when you apply all that is taught within Wealthy Affiliate including using the right SEO techniques they teach.

You can and will achieve the results you set out with ranking within the search engines.

So continue to believe in yourself and always keep going forward.

Write something…
Recent messages
Jeff118 Premium
Awesome post, I can feel your excitement in your words reading your post today, we all must have confidence in ourselves and not focus on our competitors to the point it overwhelms us.

Many of the big-name bloggers are writing for ranking, but when you put your readers first it will show in your ranking. Focus on showing your personal side, share your own experience, you will notice the big names are only pushing products and services.

Yes, many of the big guns do write for the search engines plus they have money to burn to get there as well.

Still, there are some who offer awesome advice with what they have to share with their readers as well.

Just glad I got to be there for a while how long doesn't matter it just proves that we can do it and get the same results in the search engines.

It all boils down to the training we get here and our own work ethics to get there.

Enjoy the rest of your week

Reply Like Like You like this
Mattylinc Premium
Thanks for this Andre, that's really handy to know, a good reminder of the importance and the level of the training given to us just by being members, awesome.

Good work on the top placings too, you clearly know your stuff pretty well in this online arena, I'll definitely have to start digging through your older posts as cant imagine what other absolute pearls I've missed!

Yea, it is a good reminder of how important it is to follow the training and apply what Kyle teaches. It does work; all that is needed is for the individual to make it happen.

Certainly go through some old posts and also revamped them. I have done that in the past as I got some back up in the rankings too.
Maintaining our website is a priority as well.

Reply Like Like You like this
Mattylinc Premium
@apache1
Thanks Andre, I can certainly learn a lot from you, so will definitely be keeping an eye out for all your posts.

Stay well buddy, I always find it extra encouraging finding others in the same country already living the lifestyle I'm striving towards. :-)

Seriously great to have a neighbour from across the waters around.

Enjoy the rest of your week ahead.

Reply Like Like You like this
Mattylinc Premium
@apache1
You too brother, and yeah, we've GOTTA have our all blacks, as you guys smash us, and almost everyone else in just about every other sport there is!

Reply Like Like You like this
apache1 Premium Plus
@Mattylinc
You welcome and yes but we let you guys have a few wins here and there. Just hear our borders are open so both sides are now able to travel which is great news.

Meanwhile my younger brother, who lives in Glasgow, says most pubs still aren't open there-some likely won't open again....and most shops are now, finally only starting to open doors....it's like we live in different worlds to the rest of the planet.

Reply Like Like You like this
apache1 Premium Plus
@Mattylinc
Certainly is great news for that to happen between our great countries.
I am sorry for your brother I am sure he is not happy about the pubs.
It does at times feel strange as we have overcome the issues quickly yet so many countries has still nowhere near resolving the situation.

it feels at times like it is yesteryear with the issues that were faced and we continue to move forward while others, unfortunately, are still stuck in a rut.

Wishing you a wonderful week ahead.

I have found that, very often when I write a post, the next issue of one of the other cat blogs will carry an article on the same subject. Coincidence? Possibly. If they have smarts, they will watch their competition, and if they like an idea, they'll use it.

Always good to check out the competition to see what and how they are going especially when they are doing well.
Another aspect that is taught here and Jaaxy is a great place to do that as well.

Reply Like Like You like this
webcash2us Premium
How great is that? I know your site is a well-established site with authority, but that's a lot of authority right there. Well done!

Was just looking at Neil's angel investing program the other day.
I decided to go in a different direction with some Cryptocurrency.

Reply Like Like You like this
apache1 Premium Plus
@webcash2us
Thank you John much appreciated.
not sure about well-established but it has been going for 7 years so getting there.
Wishing you well with Neil's program as well.

I didn't go with Neils program, I just set up a hard wallet for my own personal cryptocurrency investments. Down the road, I may indulge Neil's wisdom though he is a giant on the subject.

I knew the approximate age of your site from an old yahoo answers post. You posted the answer 7 years ago about the difference between spam and scam.

The thread is over 10yrs old. However, the post will disappear soon because Yahoo Answers is shutting down for good on May 4th.

Yea I heard the news about Yahoo shutting down. Shame it certainly was useful at the time.

Wishing you a wonderful week ahead.

We can all get the rankings at the top just follow the training and apply what is taught.