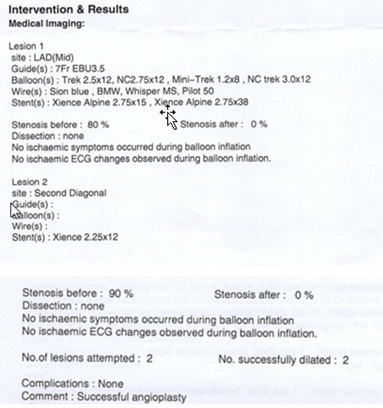 It was originally planned to have one stent put in one of my arteries via the groin area due to it being 80% blocked however I ended up with more than I bargained for.

They found another Artery was 90% blocked which somehow was missed in the original scan prior to surgery.

During the procedure, I heard the doctor talk about putting in another stent so now it became 2 instead of one.

I must have missed something as when the surgeon saw me later after the operation he told me he had to put in 3 stents overall.

I did get confused on that as I didn't remember him talking about the third stent.

Initially, I thought he got it wrong but after reading the report of the result which is attached there were 2 placed on one artery these are the ones I heard him talking about.

Then 1 on another branch of an artery which is the one with 90% blockage but it was a smaller area so perhaps that is why it got missed in the original report or misread (who knows) due to the positioning of the artery.

I didn't hear him say anything about that then again was having pain in my neck and lower back as a result of lying flat and wasn't allowed to move my head around.

I have lower lumbar and neck issues as well hence the pain due to the flat position but they gave me some pain killers during the surgery so that did ease the pain thankfully..

The other artery seemed to go smoothly and he had no issues with that but the artery with the 2 stents was the one I was hearing him talk with his assistant as he was having issues trying to get in in the right position especially the second one in the same artery.

He got to the stage of nearly giving up on the position and after a couple of minutes of thinking, he said he will try a third time, and fortunately for both of us he managed to get it exactly where he wanted.

He wanted them to be as close as possible to each other and was having difficulty doing so.

I could hear him saying his back was getting sore remember he was doing this all day and I was the last patient to see as they canceled two more scheduled after me due to the time factor.

I had been waiting since 7 am and mine started at 4.00 pm and finish at 5.40 so being without food and water since 9 pm the following day was not fun.

But now it is done so just having a rest for the next couple of days and walking slowly and carefully.

Eventually, once I get better on this the next step is the see the spinal surgeon for the upper neck issues as there is some nerve issue with the spine hence the added pain.

Not looking forward to if that if spinal surgery is required, along with working on the discs in the lower lumbar area.

AH the fun and games in life, perhaps I just need a total body overhaul instead LOL

Catch you all later

Write something…
Recent messages
CassiOfTroy Premium Plus
Andre, I am so much admiration and respect for you.

It is good of you to keep us all updated on your progress and I very, very happy to know that you are resting and on the way to recovery.

We are here to support you as much as we can.

Wishing you a good weekend and a strong recovery.

I know there is much love and support from my family here and will continue to help and support back where I can.

Yes, you do have TONNES of love and support at WA.
We are all rooting for you.

Re: the spinal issues, I’m recovering from having 2 discs replaced with rebuilt ones. The last year I could barely walk - but the surgery has helped me so much.

The surgery has helped me so much; Andre you will be glad you did it,

As for the spine issues not really looking forward to that but as you said it can help.

Over the next few weeks, I have a few appointments with my local GP and my Cardiologist so will get those things out of the way and make sure all is still going well with the heart.

Then I will be looking into the other issues a bit later.

For now, I just want to rest and relax and not walk too much in the beginning stage and give the area time to heal.

Reply Like Like You like this
RobbysGirl Premium
Loving the attitude Andre, It really makes the world of difference. As it is said "see things as you want them to be" no sense focusing on "what is" if that's not the outcome you want.

See yourself enjoying that total new body and just revel in the thought of it.

Hope you have an awesome weekend.

No use focusing on the negatives as that is what you would most likely bring.

There are times when we may not be so confident but we overcome this by having a more positive mindset and working on strengthening it along the way.
Same with Health and Healing

Wishing you a wonderful and awesome weekend.

Reply Like Like You like this
FKelso Premium
It is such a shame that the body needs so many repairs. It is pretty amazing to me that it functions at all, but it is not fun and games when something goes wrong.

Hope you will return to full strength very quickly, and that you will have an awesome recovery.

Reply Like Like You like this
apache1 Premium Plus
@FKelso
Thank you, Fran, yes in a way it is a shame but the way life is and the way we live life can bring about any repairs needed

Part of the challenges in life to deal with and move forward by completing those challenges we face.

Besides the body is only a body for movement and gaining experience in this world but I will leave that part as is.

I am sure I will return to full strength and recovery will be very beneficial.

Have a wonderful weekend Fran

Reply Like Like You like this
jghwebbrand Premium
So thankful the doctors were able to do a thorough job. WoW! That could have been a disaster for you if they had not found the 3rd problem. We are praying you will be able to handle the neck pain until everything is taken care of.

Getting old leaves its reminders.

Hope you can get back to the things you love to do soon.

Enjoy your day and weekend