Life is Precious so be Grateful

Thought I would share this with you on some of the things happening here in Australia not all due to the Current issue the world is facing now.

As I can't copy and paste this as it would be considered duplicate and not unique I remembered one of Jay's webinars about screenshots so this should be allowed. 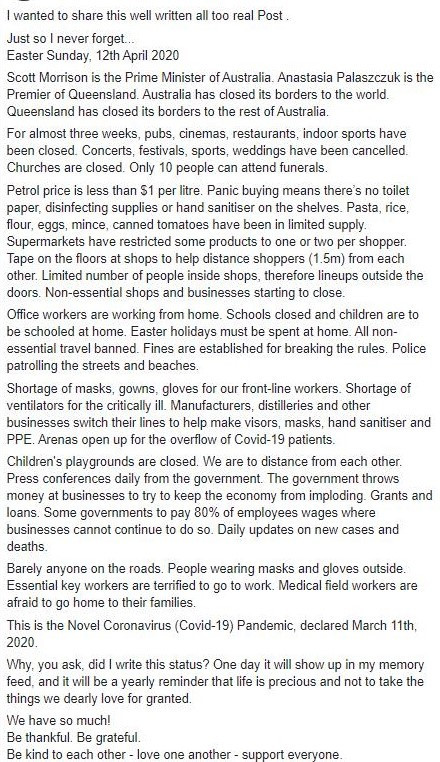 I might add to the above is that in some states including mine NSW, Police are issuing fines anyone $1000 who is out without a valid and accepted reason due this so called pandemic.

They do get cautioned first and it is noted. Also cars number plates are tagged and monitored if they are traveling too far fromm their area and asked what is their reason for traveling so far when they should be at home according to the current laws in place due to the Covid - 19 issue

To date there have been around a million dollars worth of fines issued mainly because people still don't want to follow the rules for there own safety and that of others.

The other day a women was cautioned for being around without a valid reason twice police escorted her home but refused to go it.

She walked away from them gave the police the finger and told them off. She copped a $1000 fine makes you wondered why people don't play by the rules for such a serious issue the world is facing.

Yet I guess if she caught the virus she would be the first person to blame other being around.

Another was a Telstra worker who go racially abused by a women and blame for this world issue.

Then many would not doubt know even perhaps in your own country for example the issue with toilet paper and other items described above in the image. Some staff have been not only racial abused but threated to have their heads punched in if they don't give the customer as much as they want.

These are just a small fraction of issue police, medical staff and shop workers are facing and are just trying to do their jobs for the benefit of others and this is what they get.

Unfortunately this has shown many dark sides in people but also the light within others who risk all just for the sake of helping others in times of great needs.

LIFE IS PRECIOUS and regardless of where we are in the world never take things for granted. We all matter

Stay safe and do what must be done not only for the safety and well being for you and your family but for others around you. Regardless if you know them or not.

Just wondering how are you facing the current issue we are ALL having around the world.

What restrictions are there and how is it affecting your.

Sending you many blessings and healing to alol both here in WA and elsewhere around the world.

Write something…
Recent messages
LindaF Premium
I am staying at home person so it hasn't affected me personally.
most everything the same here in BC Canada and across the country.

I had to go to the bank today, last week I didn't make it on Thursday because they closed at 3. Then the Easter weekend everything closed till Tuesday. No problem I could wait

Didn't make it in today because know they close at 2 I got there just as they closed "bugger" The manager said I could deposit in the machine," big problem with that" is the bank holds back anything over 100 for a whole week. Before I could deposit up to 200 with no holds.

I can't afford to have any holds much less for a whole week. The manager took my card and a came back said I could deposit with no holds. I had been trying to fix this problem for ages it took the Virus to have it fixed. I deposited still a bit leery Came home and brought it up on my online banking "vuala fixed" so sometimes good things happen. Linda

Regardless of all the banking issue, the main thing is you are safe and sound. Banks can wait it is a nuisance with the machines as they do tend to hold back especially on the long weekends.

Reply Like Like You like this
Mick18 Premium
Been staying in and staying safe for the most part. I only go out if necessary. We were issued a stay at home order in our state since March 21st and it is scheduled until the end of April. They have stated it will probably be extended until some time in May. A lot is the same here, except no fines as of yet.

We are truly blessed to work from home. So it hasn't effected us in the same way as it has for many others.
Stay safe.

For us, at the moment no set date but the good news here in Australia is that the spread has flattened overall.

Take care of yourself and keep working from home
Andre

Reply Like Like You like this
Mick18 Premium
@apache1
Thanks, I'm glad you are as well. That is good news Andre. Please take care and stay safe.

Reply Like Like You like this
Tirolith Premium
Stuck in Brisbane at our daughter's home as my wife had a pacemaker fitted at the end of March and cannot go home to Tenterfield just over the border in NSW until May.

Reply Like Like You like this
apache1 Premium
@Tirolith
Thanks for the comment Tom trust your wife is doing well but know once those restrictions are lifted she will be better for it while at your daughter's home. Strength will be gained due this time which will make it better for the journey back to Tenterfield.

Take care both of you and give your daughter a hug of thanks and gratitude in having your wife there.

Reply Like Like You like this
FKelso Premium
Our restrictions are about the same as yours. In our area, no fines levied yet, but there have been in some of the urban areas. Yes, I am so grateful to be healthy still -- not sure if I would survive the Covid if I got it. Trying to follow the rules; mostly staying home...just me and my cat. At least I have him for company.

Reply Like Like You like this
apache1 Premium
@FKelso
Good to hear from you Fran and also great to hear you are fine. Yes, many people don't realize the restrictions and for their benefit as well as others.
Like the saying goes better safe than sorry.

Take care stay safe and enjoy the peace and quiet around.

It's been more than 2 weeks since I last went to the supermarket to buy groceries, meat, and fresh fruit and vegetables. The next time I shop will be online with home delivery.

I live on a main road and it's quite eerie to note the lack of traffic especially in the evenings.

I'm closer than ever with my grandchildren who live in Melbourne as I'm reading Harry Potter to them via Skype.

Glad to hear you are fine but Great to hear as you mentioned on my last post you are closer with the grandkids and I am sure they are loving you readding to them especially Harry Potter one of my favorites.

Traffic is quieter here than during school holidays which is great too.

Take care and wonderful to hear from you Marion