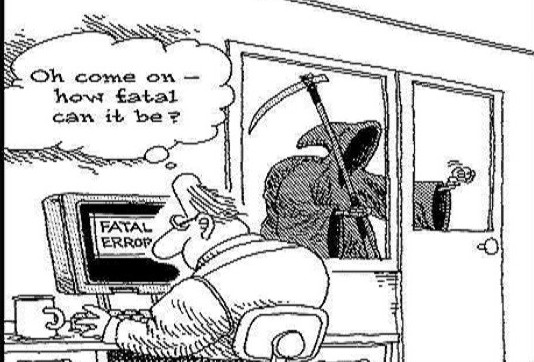 Have been out of action for a bit. I know a few weeks ago I said I was stepping back a bit but which was fine but having the computer crash was not part of the deal.

Then again thinking about it in one way it was of great benefit as it gave me more time to do some things I have postponed for years and got to read a lot more.

So on that part, it was necessary for the Universe to do something about it.

Pity, it had to be the computer. I nearly finished a 2900 word post but it crashed before I could save it.

I did get the computer running a couple of times but the lag was so bad couldn't do much keep getting the message it was unable to load and restart.

I remember replying to one member and shortly after that boom that was the end of the computer. I only picked it up today after a week of no computer turns out the hard drive was failing hence the lag and constant shut down.

I picked up my computer today and spent the last 4 odd hours getting some programs back still have a couple of more to do but having issues with them so I sent a ticket to their support team.

Shame they aren't as efficient as WA Site Support as I would have all of them back up and running.

Just caught up with some new followers and at least now I won't have to try and I mean try to text replies on the mobile, Can't stand typing on the mobile each time I try my fingers keep hitting other keys and sometimes I lose the text and have to start again. LOL

Not to worry all are challenges so now will be focusing on writing some content with what I lost, fortunately, I had a post I was working on and felt that could be two posts so part of what I lost is in there just have to add about another 2000 odd words which is no big deal.

Hope no one noticed me gone as I can see many of you have been doing so well whenever I could check on the mobile.

Keep going forward proud of you all.

Ok till next time

please do try and enjoy some fresh outdoor air & vitality of nature in the big wide open spaces!

It is raining all day here so no plans to go out besides heaps of work to do and some minor updates but most are working fine now so good and dandy with that.

Enjoy your day have an awesome weekend keep those eyes glowing with cheer and happiness.

I'm glad to hear that you are back but sorry to hear you've had problems with your computer. However, as you mentioned, sometimes it's good to take a step back and catch up on the things that never get done! But maybe not through a computer failure!

I hope you now have your computer up and running, it's so important to have a PC that works efficiently. That's a little bit painful having a 2900 word post, lost, I do hope you can recover this document.

I hear you big time regarding mobile phones! I see so many people replying and sending messages from a mobile phone, however, it is something I just try and avoid! Smartphones definitely have their uses, but for the average man's fingers, it's just painful! How many times do you hit the caps key and end up with a "Z"!?

I actually have text messages and WhatsApp on my PC. In this way I can speak out the messages through using Dragon NaturallySpeaking, so much quicker! When I am dealing with customers for my off-line business, I try and deal with all the messages when I return home and from my PC.

I have heard smartphones referred to as "weapons of mass distraction", it's not a bad description!

Have a great day and I do hope you are able to get your PC up and running efficiently.

As for the computer I have most of it going fine at least the main programs are fine and working so all good is there.

Doing some research and working on some other posts for now until I get my head around the one I lost. I know I have some bits and pieces elsewhere just need to redo it so should be fine with that

Have a great day and weekend ahead

I'm with you on the mobile phones and the fingers that don't seem to fit the keys, maybe it's easier for the ladies! Another thing with smartphones is the fact they can also be distracting! They definitely have their uses but great care also needs to be taken.

I'm glad your computer is more or less up and running, do you know what the actual problem was Andre?

It can be very disappointing when we lose content, especially a 2900 word piece of work! I had word crash on me the other day for some reason, to be fair word normally seems to remember when it crashes. However, on this occasion, it didn't!

Have a great weekend.

Totally agree with you.

My idea of using mobile is to make and receive calls and read any text message.

So If I have to text back it is usually a few words. I try to avoid texting on the phone for the reason we both get. the keys are never big enough for our fingers LOL

As for the computer I am back up and running the last support team came back to me with the link so I got that going and all is good now.

The problem was the internal Hard drive the computer is just 10 years old so I guess the hard drive decided to take a permanent long service leave and keep crashing as there were errors within it causing the long lags and not always connecting.

So got the hard drives replaced and all is good.

Happy now and relieved I can answer back on the desktop rather than the phone.

Enjoy your Friday and have a wonderful weekend

Thank you for your reply, it sounds like we are on the same wavelength, big time!

Just for your interest Andre, I use an android phone and I use something called "Mighty Text" that enables me to reply to messages from my desktop or laptop. Very useful indeed.

I'm sure you know that WhatsApp can also be used as a desktop application, far easier than using the phone!

I don't use Facebook very much, I also avoid using Facebook messenger. I actually removed Facebook messenger from my phone as it was so painful to use. I don't know why they make an application where you can actually only see three or four words on the screen at one time. Very painful indeed, hence the reason for removing the application.

10 years is a good life for a PC I would have thought Andre. It sounds like your PC has done you well and now you have given it a new lease of life, which is great. I am told that computers are much more reliable than they were a few years ago. I'm very pleased that Windows XP is no longer with us, that could be quite painful at times. Windows 7 and Windows 10 have proven to be much better in my experience.

My Dell latitude laptop will be seven years old in a few months and is still working fine. (It's been an excellent laptop.) Although I have purchased a larger 2 TB SSD drive to replace the original 500 GB hard drive to give it a new lease of life. I haven't had a chance to have SSD drive fitted yet though so I don't know the results.

I purchased a new Dell Precision desktop last year, I'm really pleased with this product. I like the idea of having a backup computer should I have a problem with one of them! It's nice to have three large screens with the desktop too.

I'm so pleased that you're not having to use your phone for work Andre. Believe it or not, it appears that there are quite a few people who use our phones all the time at Wealthy Affiliate. I don't think you can really run a successful business using a mobile phone.

You cannot beat having a computer that works efficiently. When I purchased my laptop nearly 7 years ago it was such a privilege after using Windows XP for so long. Plus my laptop had a much better spec than my previous two computers, it was a huge improvement. I can remember Windows XP taking 5 to 10 minutes to start up and 10 to 15 minutes to shut down! And sometimes it wouldn't shut down! There were many times when I felt like throwing it out the window! I don't often get those feelings, thankfully, but Windows XP was fairly painful!

I'm seriously really grateful and thankful when I turn on my computer in the morning. This is something in the world that has definitely improved, big time.

Sorry if I have digressed slightly, I'm passionate about making life simple!

Reply Like Like You like this
RickHan Premium
Hi Andre, I am thankful you got your computer back. I know how frustratting it canbe to lose files so I find your attitude both refreshing and inspirational. I try to see the postive side of things but I am definitely learning from you my friend. I have a back up home server for just that eventuallity. Might be somethingworth looking into.

Reply Like Like You like this
apache1 Premium Plus
@RickHan
Thank you Rick,
Great you have a home server for now I am happy with my external hard drive one is 6 terabytes the other is 4 so plenty of space to back up.

Reply Like Like You like this
RickHan Premium
@apache1
Those work great as well. Glad you have a backup, so important these days. Our livelihood is so dependent upon technology.
You also have a great day.
Take care.

Thanks for checking in,
Jessica

Great to hear from you, No can't get the lost files restores lost forever but at least I have restored most of the major programs today which is more important.

Have a great day Jessica
Andre

Reply Like Like You like this
apache1 Premium Plus
@philmedia
Thank you, Phil, that means a lot and yes it was what I needed not the way I initially planned but guess upstairs knows what's best to go forward.

Still, plenty more to do but in a way was a good break that I needed after all these years here.